- But June growth surprises on downside with weak Q3 hand-off.

A barage of official economic data out Friday proved a mixed bag for an under-pressure British Pound.

The Office for National Statistics showed economic growth surprising on the downside in June, denoting a poor hand-off to the third-quarter at a time when the currency is under mounting pressure from unease over the Brexit negotiations and mounting geopolitical tensions.

However, any downside damage to Sterling was contained by a consensus-beating set of industrial, manufacturing and business investment data sets.

UK GDP grew by just 0.1% during June, down from 0.2% in May, when consensus had been for a second consecutive 0.2% expansion.

That left the pace of growth at 0.4% for the second quarter overall.

Second-quarter growth is up from 0.2% at the start of the year and in line with expectations, although it has done little to boost confidence in the UK's economic prospects for the current quarter.

"The GDP figures confirmed that the economy bounced back after the weak start to the year and will reassure the Monetary Policy Committee that it was right to raise interest rates last week," says Ruth Gregory, a senior UK economist at Capital Economics. "The 0.4% quarterly rise in GDP in Q2 was in line with both the Bank of England and the consensus forecast. Admittedly, the breakdown was not quite as reassuring." 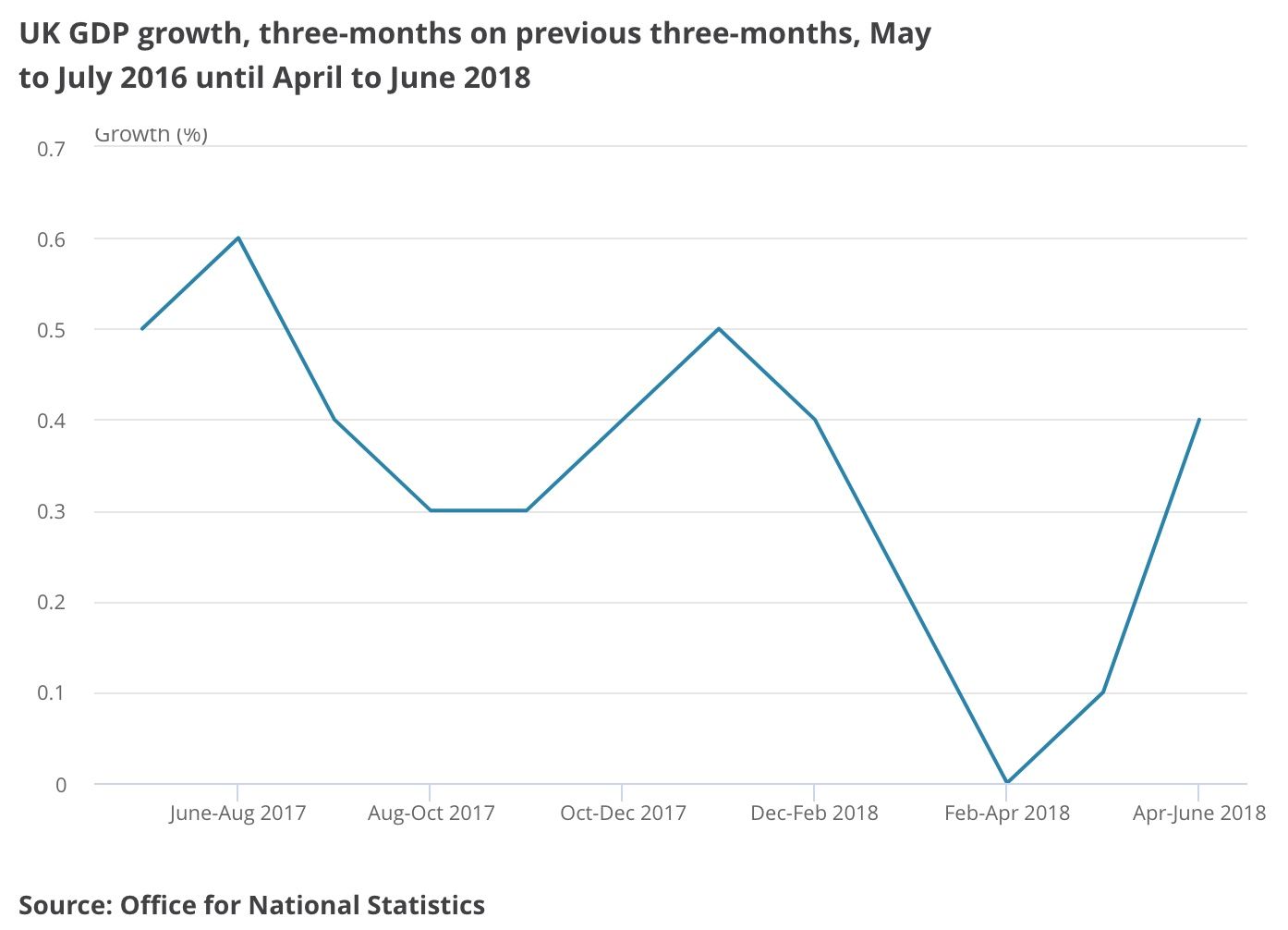 Interpretations of the mixed data are, unsurprisingly, mixed.

"The meagre rise in GDP in June shows that the economy has little momentum heading into Q3," says Samuel Tombs, chief UK economist at Pantheon Macroeconomics. "Meanwhile, the expenditure breakdown of Q2 GDP suggests that consumers have started to adopt a more cautious mindset."

Consumer spending, government consumption and business investment all still made solid contributions to overall GDP growth in the second quarter, although the pace of consumer spending was weaker than it was during the first quarter when it did almost all of the heavy lifting. International trade weighed on growth.

GDP data was released alongside a host of other figures that showed the UK construction industry recovering further from the depths of recession in June and for the second quarter overall.

UK construction output rose 1.4% in June, down from 2.9% in May but far ahead of the consensus for a contraction of -0.2%, which suggests the industry recovery from the depths of year-long recession has taken hold.

Business investment rose by 0.5% during the second quarter, faster than the 0.3% growth anticipated by the market. Although revised figures show it contracted by -0.4% during the first three months of the year, a deeper slump than the -0.2% decline previously reported by the Office for National Statistics.

Elswhere, industrial production grew 0.4% in June, as expected and manufacturing production gave a nice 1.5% outturn where markets were expecting a read of 1.0%.

But the Pound is More Interested in Geopolitical Risks and Brexit

"Domestic markets have not moved much. Interest rate markets are broadly unchanged. Meanwhile the pound continues to react more to Brexit developments than economic releases. In this sense we suspect that next week’s resumption of EU/UK negotiations could be significant," says Phillip Shaw, an economist with Investec.

The Dollar is easily the dominant force on global markets and explain much of the moves in Sterling ahead of the weekend.

The Dollar is bossing its currency compatriots around owing to a sharp increase in geopolitical tensions and demand for safety with concerns over Turkish financial stability demanding the lion's share of attention.

Of course, unease over the trajectory of the Brexit negotiations has played a significant role in recent losses for Sterling too.

Currency markets care about the GDP data because it reflects rising and falling demand within the UK economy, which has a direct bearing on consumer price inflation which is itself important for questions around interest rates. And interest rates themselves are a raison d'être for most moves in exchange rates.

The Bank of England raised its interest rate by 25 basis points to 0.75% Thursday, marking only the second increase in Bank Rate since the financial crisis, but also a second within the last year. It's previous rate rise, to 0.5%, came in November 2017.

"Looking ahead, the surveys suggest that the economy has maintained this pace of growth at the start of Q3. Of course, Brexit-related uncertainties could intensify over the coming months, if the EU negotiations stall or if Brexit turmoil results in a general election. In the absence those developments, however, we remain cautiously optimistic about the economy’s ability to expand at reasonably solid rates over the remainder of the year," Capital Economics' Gregory adds.

Friday's data left the annualised pace of UK GDP growth at 1.3%, which is in line with a downwardly-revised consensus, although the Capital Economics team forecast that growth will be 1.5% for the year overall. Both of these numbers are below the 1.7% seen in 2017 and beneath the 1.8% seen in 2016.