A false dawn for the Euro? The single currency rose, then fell on the ECB's March policy event. © European Central Bank, reproduced under CC licensing

Euro bulls were given a shot at pushing the Pound lower in the wake of the European Central Bank's March meeting, but their capitulation has confirmed Sterling enjoys formidable support around current levels.

The British Pound could be due a move higher against the Euro over coming days now the March European Central Bank meeting has passed without giving Euro bulls cause to bid the common currency higher again.

European rate setters tweaked some key language inside their latest monetary policy statement Thursday, delivering a fleeting shot in the arm to the single currency.

The Euro pushed both the Dollar and Pound lower during the early stages of the European Central Bank's March policy event, taking heart from the removal of a key phrase from the Bank's guidance document that signalled the time to end the gargantuan money-printing programme was drawing close. 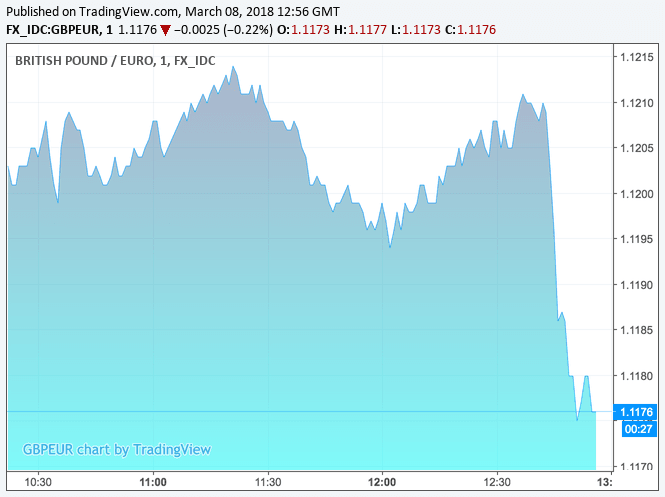 Above: One minute chart highlighting the Euro strengthening against the Pound early in the ECB's meeting.

However, the subsequent announcement to downgrades to the Bank's official inflation forecasts for 2019 have countered market optimism over the change to forward guidance, harrying the Euro into retreat.

The recovery in the Pound-to-Euro exchange rate was notable: 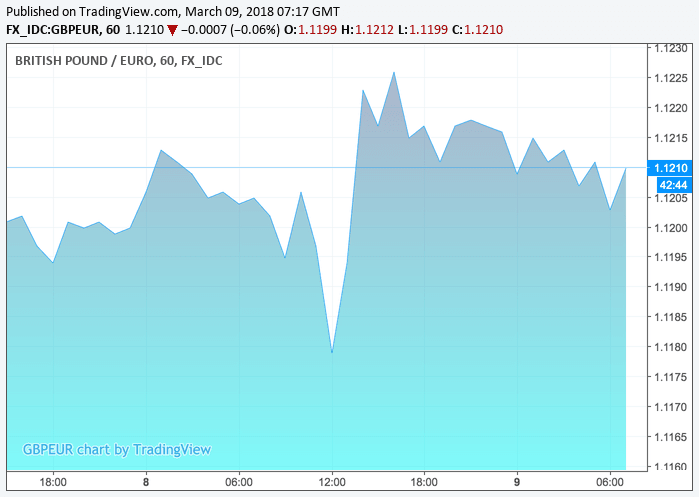 Above: Hourly chart showing the Pound's recovery, and extension higher against the Euro

"If the outlook becomes less favourable, or financial conditions become inconsistent with further progress towards a sustained adjustment in the path of inflation, the Governing Council stands ready to increase the asset purchases in terms of size and/or duration," is the wording the European Central Bank removed from its regular statement.

Markets have taken this to mean the ECB will not countenance an about turn on its commitment to winding down the quantitative easing program that has seen it hoovering up €60 billion or more of European bonds each month since early 2015, which has compressed market interest rates and devalued the Euro.

A firming commitment to exiting the quantitative easing programe opens the door to a discussion about an eventual rise in Eurozone interest rates, which will be positive for the single currency over the longer term. However, the ECB having shaved 10 basis points off of its 2019 inflation forecast, which is now 1.4%, headed the Euro off from making an afternoon of its earlier rise.

It is inflation that the ECB has been trying to coax higher through its bond buying and low interest rate policies and so, when forecasts of inflation are downgraded, it is bad news for those hoping to see an end to quantitative easing or an interest rate rise sooner rather than later.

Naturally, that is also bad news for the Euro.

"The dropping of the quantitative easing bias is a surprise to us, but we do not judge that it has major implications for the speed of the ECB’s exit compared to our current baseline scenario. In June, we think the ECB will set out a clear roadmap for the end of its asset purchase programme," says Nick Kounis, an economist with ABN Amro.

This leaves Sterling and the Euro with little reason to deviate from the range bound trading conditions that have persisted over the last five months, giving price action an uncanny resemblance to a tennis match while leading  strategist David Bloom at HSBC to sum it up quite neatly when he described the currency pair as “dull as dishwater” recently.

Yet the support Sterling is finding is important; we find that Sterling enjoys strong buying interest on any dips below 1.12 with traders sensing a bargain in the context of such dips representing a sizeable deviation from the long-term side-ways orientated range that centres around 1.13.

This corresponds to a setback for the Euro which analyst Robin Wilkin at Lloyds Bank reckons could allow the GBP/EUR to recover back to 1.1242/1.1254 in the near-term.

George Saravelos, a currency strategist at Deutsche Bank says the ECB meeting doesn't matter "that much" as his analysis of the flows driving the Euro higher over recent months points to "these being largely beyond the ECB’s control.”

Saravelos believes foreign investment flows back into Europe have had much more to do with the Euro’s 17% gain over the Dollar in the last 12 months than anything the ECB has said or done.

These “flows” are the result of money managers piling into Eurozone stock markets as well as other investors buying into real-economy assets.

Saravelos argues that these kinds of investors will be much more sensitive to changes in GDP growth than they will to language tweaks in the European Central Bank’s regular monetary policy statements.

“The most important signal [from the ECB] we will be watching is that the overall path towards policy normalisation remain intact. So long as this is the case, we would remain buyers of EUR/USD on dips. The flow “normalisation” story has more to run,” says the analyst.

While the Euro could have a shot at the Dollar, this might not necessarily translate into gains against the Pound owing to the GBP/EUR exchange rate's stubborn range-trading nature.

Nevertheless, Deutsche Bank do expect the exchange rate to fall back to 2017 lows located at 1.0750 over coming months, citing the country's current account deficit, amongst other factors.