Deutsche Bank have joined a growing list of foreign exchange strategists seeking to profit from a rise in the Euro against the Pound.

Analysts at the world’s third-largest foreign exchange dealers have made the call following a strong run for the Euro with some analysts suggesting the rally might be due to fade.

However we note that this call appears to cover a multi-week timeframe so any weakness in the Euro short-term might offer a good point for others to enter the trade.

The Euro now enjoys the status of being the best-performing G10 currency this year, up 7% against the Dollar and 1.66% against the Pound. 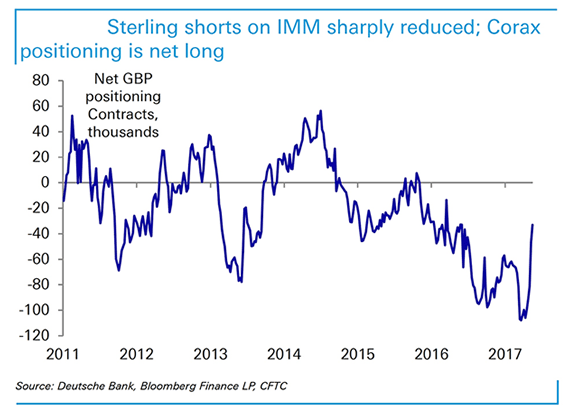 “While our equity strategists caution that valuations are getting to be stretched, we expect foreign investors to continue to re-allocate into Eurozone stocks in the near-term at any rate,” says Winkler in a note to clients dated May 22.

Global investors demanding Eurozone stocks therefore appears to be the main reason for the Euro’s ascent argue Deutsche Bank. Were these investors hedging against Euro weakness we would be seeing forces working against the Euro at the same time.

However, that investors are not hedging exposure it would suggest they expect the Euro to maintain strength for a good portion of time.

“A potential reallocation of foreign investors into European equities, as euro area politics look less threatening, likely will offer support to the EUR, says Hamish Pepper, an analyst with Barclays.

A number of analysts have meanwhile forecast a period of weakness for the Pound that should cover the mid-year period.

Sterling by remains beholden to politics, and the chances of a strong new Conservative government compromising on the Brexit bill have decreased lately.

Deutsche Bank’s own data shows an increase in the number of market participants entering pro-Sterling positions on foreign exchange markets for a number of weeks now.

IMM data also recorded a meaningful reduction in Sterling shorts in the past weeks. 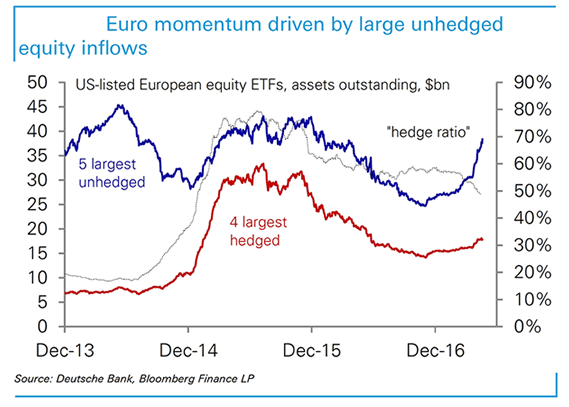 Now that the markets are more balanced and not overly stretched in one direction - as has been the case since the EU vote - the chance for more traders to enter the market, bet against the Pound and send it lower, has increased.

“We would re-enter sterling shorts at these levels,” says Winkler.

Further Euro Strength Against the Pound

As mentioned, strategists at another one of Europe’s leading research houses has meanwhile also confirmed his team are backing the Euro over the British Pound for coming months.

Valentin Marinov, Head of G10 FX Strategy at Credit Agricole, says he sees, “scope for the EUR to appreciate in the quarters to come.”

The call comes at a time that sees the Euro finding its feet against the British Pound having suffered a period of weakness from about mid-March.

The GBP had been benefitting from increased expectations of UK PM May being in a better position and having sufficient time in order to negotiate an acceptable exit deal since she called for a snap election.

These expectations have however since been questioned with a raft of polls showing voters are now taking a shine to the leftist Labour party at the expense of May's Conservatives.

But even if we set politics aside, the outlook does not look favourable to Sterling.

“Strongly capped BoE monetary policy expectations as well as ongoing uncertainty when it comes to growth should keep currency upside limited. As such we expect the currency to trade range-bound at best,” says Marinov.

The Euro’s recent recovery comes as markets ready themselves for the day the European Central Bank (ECB) starts raising interests and turning off the money-printing presses.
This in turn is a result of the steadily improving inflation levels in the Eurozone which reflect a steadily improving economy.

“Regardless of the ECB’s still dovish policy stance we see scope for the EUR to appreciate in the quarters to come,” says Marinov.

We have reported elsewhere that UniCredit Research are maintainig a target at 1.11 for the GBP to EUR exchange rate having cited the increasingly positive tone being afforded to the Euro.

“The margin for a stronger appreciation of the common currency remains wide,” says a recent note from analysts at UniCredit. “EUR/GBP has also rebounded, close to 0.86.”

The Euro is in Command on Impressive Eurozone Data

The real driver of foreign exchange markets at present is the Euro which has come into favour with global investors in a big way of late.

Data from IHS Markit showed that firms are seeing business expand at its strongest pace in six years, giving rise to expectations for a strong quarter for the Eurozone economy.

The composite PMI for May - a broad-based assessment of the business activity of Eurozone firms - read at 56.8, analysts had forecast a reading of 56.6.

“Capacity is being strained by the strength of demand, with backlogs of work showing one of the largest increases in the past six years. Job creation has surged to the second-highest rate in nearly a decade as firms seek to expand capacity and meet rising demand,” says Chris Williamson, Chief Business Economist at IHS Markit.

Meanwhile, data out from Germany was equally impressive.

This is a record high since the index was started in 1991 after reunification.

The current assessment component surged from 121.4 to 123.2 and hence also to its highest level since 1991.

Both the forward-looking expectations and the current assessment components among manufacturers increased.

The current assessment figure in the construction industry hit another record-high level.

Undoubtedly the news is good for the Eurozone outlook and we would expect the Euro to remain supported. But the chance of such surprises being repeated in future months are unlikely.

“The latest renewed and strong rise in German business sentiment is great news. However, the air for further improvement is increasingly getting thin. While it is impossible to forecast exactly when the peak will be reached, it is clear that we are getting close to it. Repeatedly strong increases in the next few months towards levels seen before reunification (i.e. sentiment among companies in Western Germany) are unlikely in our view,” says Dr. Andreas Rees at UniCredit Research.