The Pound to Euro exchange rate bounced following the unexpectedly swift resolution to the UK leadership debate that will see Theresa May installed as the new Prime Minister on July 13th. 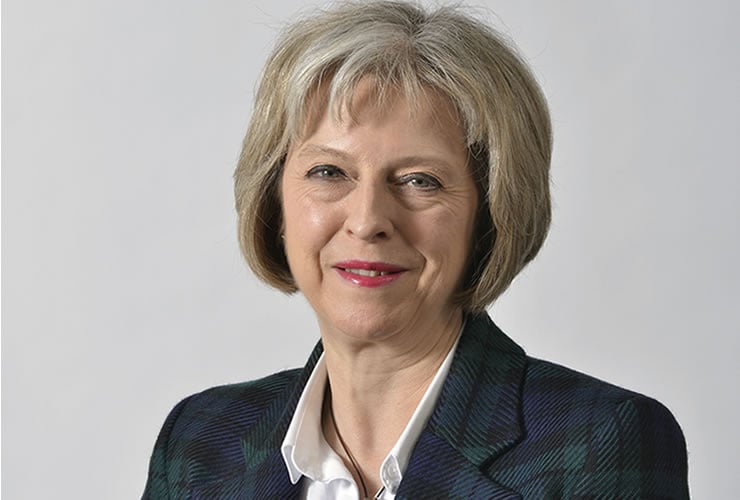 Andrea Leadsom, the pro-Brexit contender for the leadership of the Conservative party, announced on Monday she is to withdraw from the race for the keys to Number 10 Downing Street.

The move triggered a fast-moving chain of events within the Conservatives that ultimately confirmed May as the new leader of the party and her ascendance to Prime Minister will be complete by Wednesday.

This is good news for markets, businesses, and your everyday citizen who have been starved of certainty ever since the country voted to exit the European Union on June the 23rd.

We know May is committed to Brexit but she is certainly not cut from the same anti-EU cloth as Leadsom.

Furthermore, she has years of experience at the highest level in both the UK government and in Europe and markets will welcome news that an experienced leader has taken over the reins.

This is certainly a pro-GBP outcome and we noted a discernable bounce in the exchange rate following the Leadsom resignation, rumours of which were triggered at around 11:30 AM: 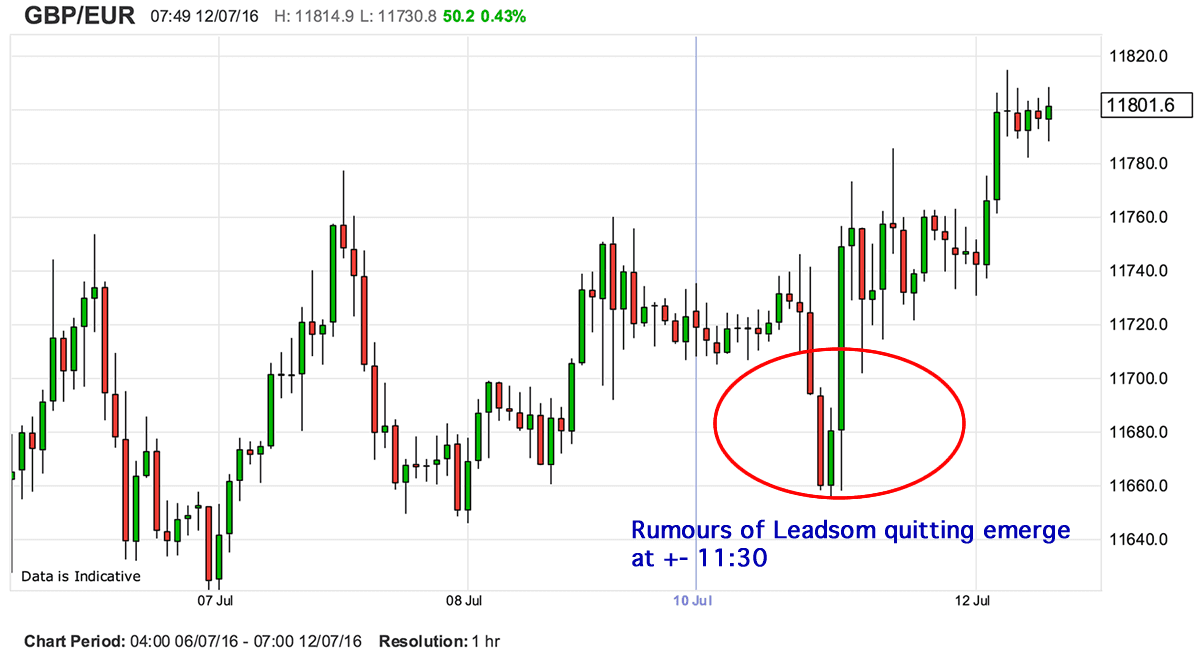 Those with international payments are now looking at the best levels from which to sell GBP since the 5th of July. Bank accounts see spreads of between 1.1473 and 1.1390 while independent providers are tighter with rates on offer above 1.16.

"Leadsom was one of the faces of the leave campaign and was likely to favour a 'hard Brexit'; that is, meaningful restrictions on free movement that is simply incompatible with access to the single market. In contrast, Theresa May backed the campaign to remain in the EU and, although she has Eurosceptic tendencies, it is widely thought that Theresa May is more likely to seek a soft Brexit," says Daniel Vernazza, Lead UK Economist at UniCredit.

Soft Brexit is also sometimes called the “Norwegian plus” option which would seek to maintain access to the European single market, including financial services, and some (crucially largely symbolic) restriction on free movement.

Analysts at Barclays believe May will only look to be installed with her new cabinet by the end of the month.

While there is scope for Mrs May to formally replace David Cameron sooner, it is argued she might want a more gradual process in order to form her new Government Cabinet.

"Overall, the resulting expedition in finding PM Cameron’s successor is likely to be viewed positively by financial markets and investors as it should create a degree of certainty with regard to the UK government’s new direction sooner than previously anticipated," says Andrzej Szczepaniak at Barclays Research. 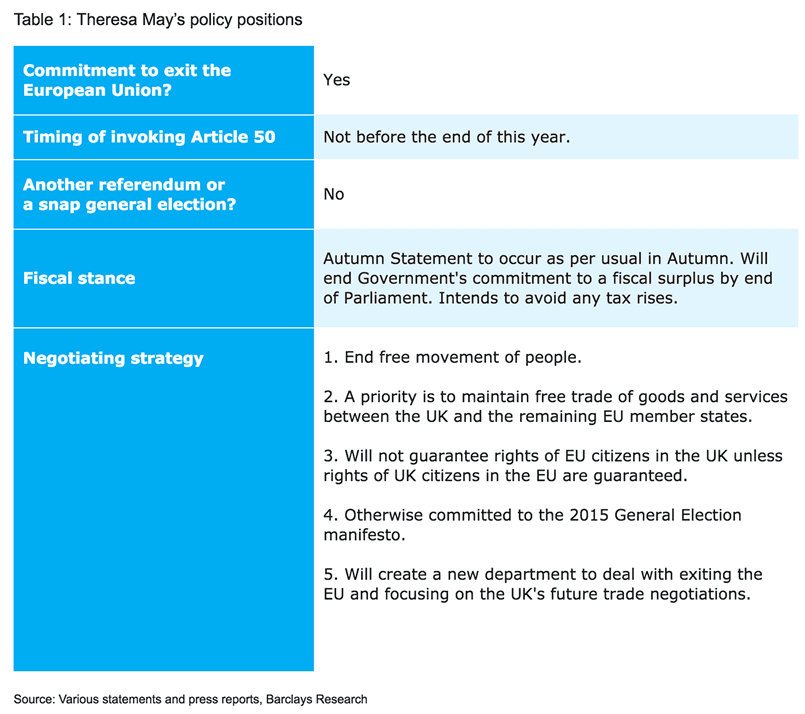 The British Pound has fallen against the Euro in aggressive fashion since the referendum - the fall from  highs at 1.32 to the 1.17 we are now witnessing has happened in just ten trading days.

The Pound meanwhile dropping to a 31-year low of $1.28 against the US dollar and the trade-weighted index has dropped by over 10%.

As an indication on how dire the GBP's performance has been; of the world's top 31 currency's, GBP has been the worst performer in 2016, having overtaken the Argentine Peso which was subject to an economic recession and the lifting of currency controls until December 2015.

Hedging demand is on the up with investors seeking to protect themselves against a further fall in Sterling over the next year, albeit to a lesser extent than at the peak of Brexit jitters.

With the shock of the vote subsiding and markets turning to other topics once more, the prospect for the decline slowing looks increasingly likely.

The Pound is arguably oversold; we know this to be the case by observing the Relative Strength Index (RSI) reading on the daily charts.

The RSI presently reads at 28.1 - anything below 30 is a signal to markets that an asset is oversold and that a move back into the 30-70 range is likely.

As can be seen, the RSI does not tend to trade below 30 and above 70 for protracted periods of time: 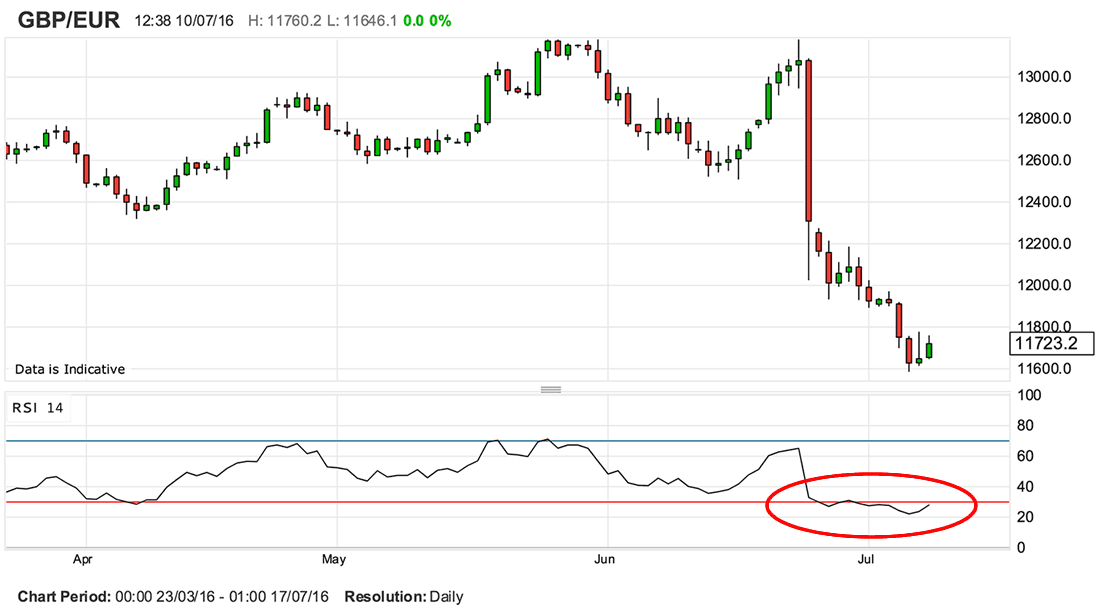 It does however allow us to observe that a move is overcrowded, overextended and therefore at risk of fading.

Having seen two days of ascent in the Pound to Euro exchange rate we could well be at the head of a period of consolidation and the establishment of a new near-term range.

Note that I choose the word consolidation, and not recovery.

The overwhelming consensus amongst analysts is that Sterling is likely to decline further, based on the view that the Bank of England is likely to cut interest rates over coming months.

However, the decline is likely to be a lot slower, and will also likely offer periods of GBP strength for those with outstanding international payments to transact on.

A Big Decision from the Bank of England Due This Week

Domestically, all eyes turn to the Bank of England where policy makers are set to decide whether or not to slash interest rates.

Such a move is not necessarily a negative for the GBP as markets have arguably already accounted for the move already.

It is the unexpected moves that will propagate an extension lower.

One of the surprises could come via the announcement of any extension to the quantitative easing programme. This is where the Bank creates electronic money to purchase government debt in the form of gilts.

“In our view the market is still likely under-pricing BoE easing, with our economists forecasting a 25bp rate cut next week followed by a 25bp cut at the August meeting and GBP 100bn worth of QE (including corporate bonds) to be announced by the November meeting,” say BNP Paribas in a strategy briefing to clients.

BNP Paribas believe the upcoming rate decision to be held on July the 14th will prove to be the catalyst for the next leg lower in Pound Sterling.

Barclays have released their latest economic forecasts and have told clients a UK recession is already underway.

Indeed, Barclays are one of a number of institutions that are forecasting recession to take hold over coming months.

Barclays expect the UK economy to contract in H2 and 2017, albeit relatively modestly.

“This is driven by negative investment growth in light of the heightened uncertainty of the UK’s relation with the EU, as well as its domestic political leadership, possibly enhanced by an inventory correction,” says the note.

The quickest way for non-financial corporations, especially in the
manufacturing industry, to react to heightened uncertainty is cut production and meet demand by destocking until the situation gets clearer.

In parallel, consumption - the mainstay of the UK economy - should soften on the back of confidence, which would halt job creation and wealth effects, in part driven by a much weaker currency and concerns about real estate valuations.

The improved net exports contribution that is implied by a cheaper currency is only expected to partially offset the drag from declining investment and consumption.

“The risk to the UK outlook may be tilted for a potentially even deeper recession,” say Barclays.

If analysts at the bank are correct then those watching the Pound should expect the mood music to remain overwhelmingly negative.

That said, it is important to note that it is not all negative out there.

“While most commentators have suggested the fall in the pound is a negative development, we have long cited a depreciation as an important reason why the economic effects of a vote to leave the EU should be smaller than the gloomier pre-referendum predictions suggested,” says Scott Bowman at Capital Economics.

Analysts at Morgan Stanley agree saying front-loaded GBP weakness could even be beneficial for the UK, allowing it to generate inflation expectations which, in conjunction with lower nominal bond yields, could channel real yields to low enough levels to support investment picking up.

Italian Banks Will be Key to the GBP Outlook

We have been noting an increasing preference by the British Pound to track the German DAX over recent days.

The linkage is understandable in that European investors tend to repatriate capital from global markets in time if heightened market stress, regardless of the source of that stress.

Since the Brexit vote, GBP has also been regarded as a risky asset; one that is sold when markets are in decline.

The source of recent stresses to the markets have proven to be Eurozone banks - the Italian sector in particular.

Italian banks have been laboured with non-performing loans and markets are starting to take note with share prices starting to come under pressures.

We have seen trading in Monte dei Paschi suspended and more commentators point to the Italian sector as the source of the next financial crisis noting that 17% of Italian bank loans are non-performing.

The Governor of the Bank of Italy Ignazio Visco has over the weekend warned that Italian bank intervention cannot be ruled out, confirming a growing concern amongst Italian policy makers.

The evolution of this story could turn out to be one of the most important drivers of the Pound Sterling against the Euro over the coming week.

However, there are notable upside benefits to the Euro should the Eurozone leadership step in behind Renzi and his government and seek a solution to the crisis.

It is the prospect of a resolution that has strategists at Morgan Stanley advocate further upside potential for the GBP to EUR rate.

"From here should our expectations of the UK aiming for an early GBP undershoot and EMU officials trying to support Italy’s PM Renzi as much as possible come to fruition," says a strategy note from the bank.