UniCredit Bank have announced an upgrade to their euro exchange rate forecasts, a significant call as we note the accuracy of this bank’s recent forecasts on the currency pair. 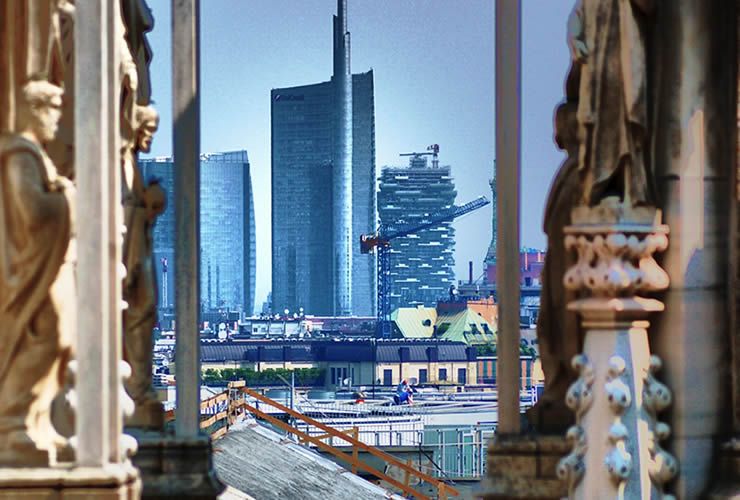 Over a year ago UniCredit Bank of Milan told clients they believed the euro had reached the bottom of the long-term downtrend it had been caught in since 2008.

The bank was an outlier in the sense that a good majority of the analyst community were still forecasting the euro to aim for parity with some big names like Goldman Sachs and Deutsche Bank expecting the euro/dollar exchange rate to reach the 0.80s.

Back in 2015 UniCredit argued that, “whichever way one cuts it - be it nominal or real rate differentials – it is very difficult to come up with ‘short-term fair values’ for EUR-USD below 1.15. We think the market has just started paying attention to this reality.”

Ultimately the call was correct as the euro has traded above 1.08 against the US dollar for the majority of the past 12 months.

So how do the sages at UniCredit see the upcoming 12 months playing out for the single currency.

In a note to clients released on the 11th of May we hear of an upgrade to the euro exchange rate complex with the bank noting a weaker US dollar outlook and a benign European Central Bank dominating as two key reasons behind their thinking.

Peak Dollar Has Been Reached

In 2H15 UniCredit joined HSBC by moving firmly into the "USD-bear camp" on account of the dollar’s excessive overvaluation.

The expectation was that the dollar’s correction from overvalued levels would be very gradual as other major central banks (the ECB included) would fight to prevent their currencies from appreciating.

The dollar peaked towards the turn of 2016 and began its descent, the pace of which took many, including the dollar bears, by surprise. 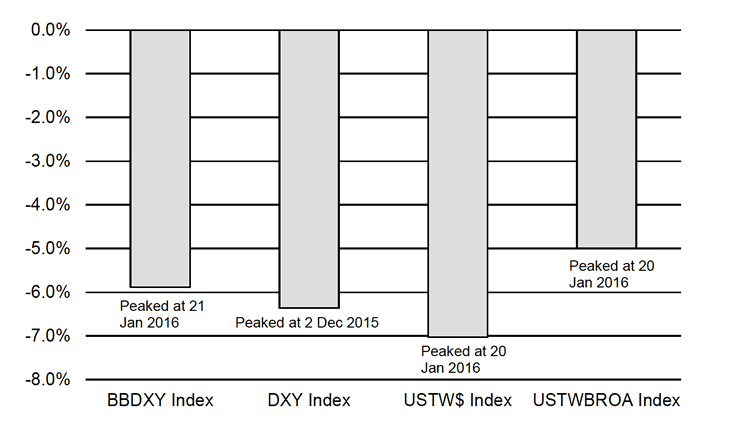 Above: Whichever dollar index you choose to reference, we can see ‘peak dollar’ is behind us. Source: UniCredit, Bloomberg.

Explaining the dollar’s decline has largely rested on the suggestion that the Federal Reserve’s decision to cut back on the amount of times it intends to raise interest rates in 2016 from the four suggested in December 2015 to the one currently priced for 2016.

However, this has not been the main driver of USD weakness argue UniCredit.

If the Fed is not to blame, what is to blame for dollar weakness? UniCredit point out that exchange rate performance in 2016 has been highly correlated with valuations during 2015.

“On average, the best performers this year have been those currencies that were mostly undervalued last year (see chart 2). This is a noteworthy development because it shows that when price moves become too stretched, the market (frequently with a specific event as a catalyst – in this case the G20 Shanghai meeting) re-focuses on fundamentals,” says Dr. Vasileios Gkionakis, Global Head of FX Strategy at UniCredit Bank in London.

And the dollar overvaluation has been significantly pronounced. 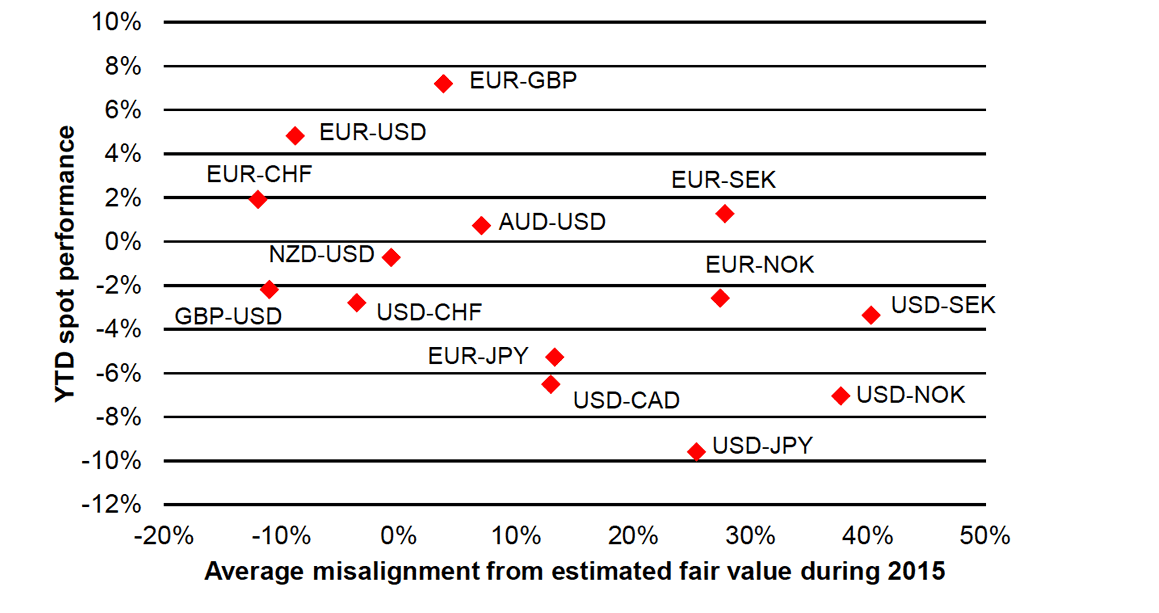 Above: Currencies undervalued in 2015 are outperforming in 2016. Source: UniCredit, Bloomberg.

“The mix of high past (and current) overvaluation with strong downside momentum should lead to the dollar selling off further as value investors increase short exposure and momentum traders jump on the trend,” says Gkionakis. 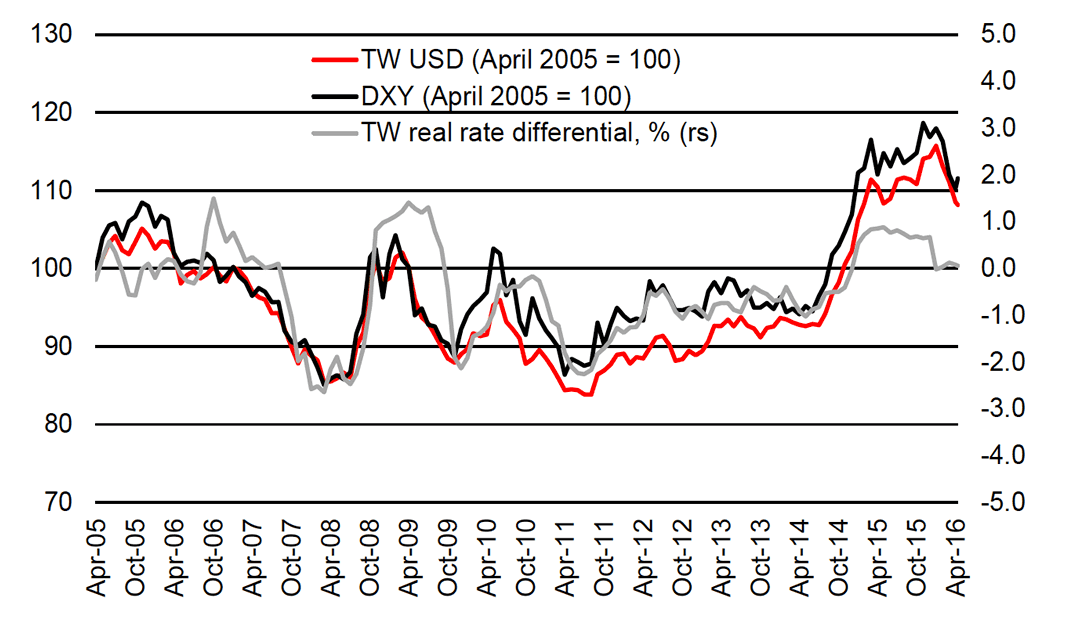 Above: The dollar is still overvalued. Source: Bloomberg, UniCredit

It is suggested that this observation is especially relevant given that USD positioning is by no means stretched to the short-side: when we aggregate all G10 positioning data reported by the CFTC (for non-commercials), we find that, although USD-longs have closed rapidly, USD positioning is close to zero.

Indeed, EUR-positioning is still short, though to a far lesser extent than last year.

“Consequently, the valuation and price-trend dynamics are set to work against the greenback and support the euro on a multi-quarter basis,” says Gkionakis.

UniCredit say the second cornerstone to their pro-EUR forecasts is the removal of a formidable hurdle to further appreciation -  the ECB.

The central bank’s recent communication suggests a shift from its previous obsession with the exchange rate, “we believe that the ECB has – rightly – stepped back from talking the euro down and in terms of monetary policy action we think that it is pretty much done,” says Gkionakis.

Risks to the Pro-EUR Forecast

As always in forecasting, risks that the call is wrong must be accounted for.

UniCredit concede that it is possible that euro area inflation rises even slower than they are pricing into their models which could see the euro explore further interest rate cuts and an expansion of its asset purchase programme - the two reasons why the euro has fallen as far as it has over recent years.

Even then, it would still remain to be seen what exactly the central bank could deploy to keep the currency weak.

There are also risks to the bearish dollar outlook.

“There is always the possibility that the Fed embarks on a hiking cycle that is far more aggressive than we currently envisage. This would be sufficient to allow the dollar some breathing space and send it higher, at least in the short-term,” says Gkionakis.

That said, if such a scenario was to unfold, in all likelihood it would occur against a backdrop of rapidly rising US inflation. The latter would put pressure on US real rates, potentially compressing real-rate differentials with the rest of the world.

“Hence, it is not clear to us that the support for the dollar would last long, though we do acknowledge the risk that this could revive the “long-USD” trade,” says Gkionakis.

Other Developments on this Topic: