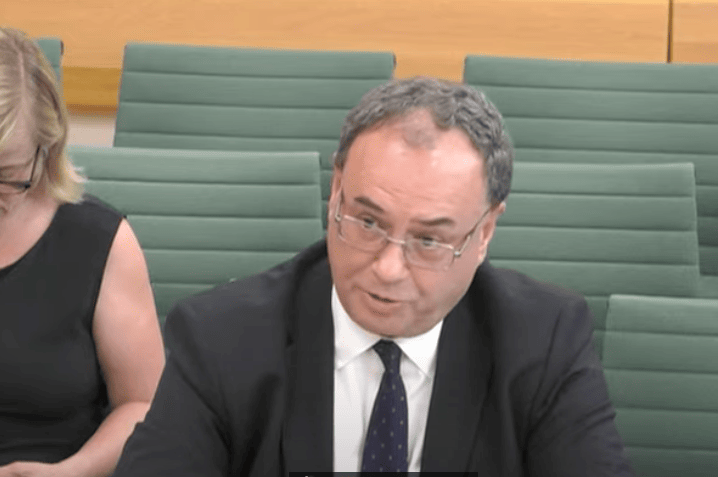 The Bank of England is close to ending its interest rate hiking cycle and this will leave Pound Sterling vulnerable to further losses against the Dollar and Euro, according to one investment bank.

"Sterling looks much more vulnerable against both the USD and the EUR," says Roberto Mialich, FX strategist at UniCredit Bank in Milan. "Markets are still pricing in a strong degree of tightening in the UK, even after the BoE flagged increasing risks of recession in its last MPC meeting."

Bank of England Governor Andrew Bailey reiterated those risks when told UK lawmakers on Monday a significant income shock was playing out in the UK which would ultimately push up unemployment.

"That is going to have an effect on domestic demand, it is doing to damp activity, it will increase unemployment," he said.

Bailey reiterated that the UK was facing an inflationary shock that had external roots and that raising interest rates would have a limited overall impact on bringing down inflation.

Despite the repeatedly dour commentary coming from the Bank of England money market pricing shows investors are prepared for a further 100 basis points of hikes to come out of the Bank of England in 2022, with a terminal rate of 2.25-2.50% being reached in 2023.

However, UniCredit join other analysts in saying the Bank won't deliver on these expectations owing to the expected economic slowdown, a disappointment that would prove a setback to the Pound.

They now anticipate just one further rate hike from the Bank in the current cycle to come in August.

He adds that interest rate differentials have not offered Sterling any comfort and he expects them to represent a drag in the coming months. 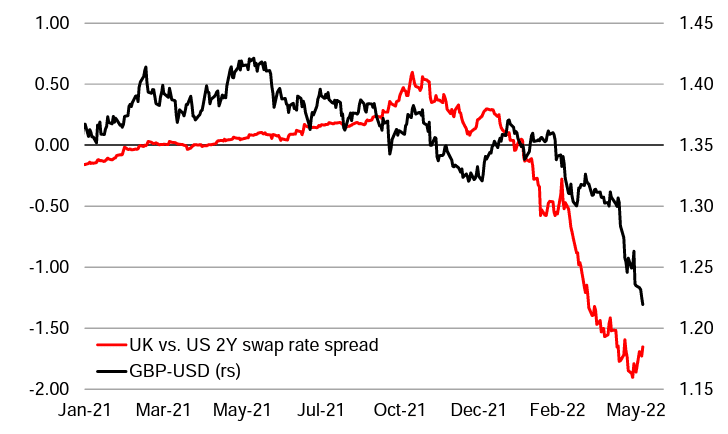 Above: "Short-term interest rate differentials moving in the USD's favour remain a drag on GBP/USD" - UniCredit.

"Rising interest rates in the US have already contributed to the GBP-USD decline that we expect to continue even below 1.20," says Mialich. "Interest rate differentials also played an essential role in lifting EUR-GBP back beyond 0.85." (EUR/GBP above 0.85 = GBP/EUR below 1.1765).

But the analyst says the EUR/GBP's rebound so far has been slower than the decline in interest rate differentials would have suggested.

"Hence, there is still upside potential for EUR-GBP, in our view. Regression analysis on the 2Y swap rate differential shows that it should trade above 0.90, which remains our medium-term reference target for this pair," says Mialich.

From a Pound-Euro rate perspective this suggests a move back below 1.11. 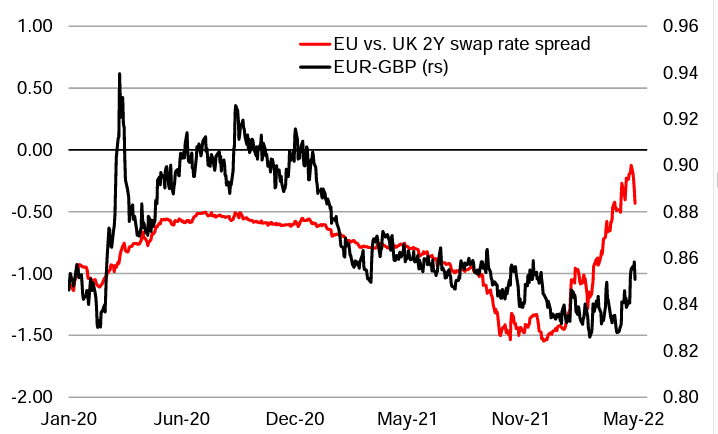 Above: Interest rate differentials are expected to offer EUR/GBP more upside potential back above 0.90: UniCredit.

Regarding the economic outlook, UniCredit now expects UK GDP to contract 0.2% quarter-on-quarter in 2Q22 having previously expected a rise of 0.2%.

The downgrade is a result of an expected squeeze in household real disposable income amid a surge in inflation and higher taxes.

They expect a small rebound in growth in the third quarter of 2022, but then another contraction in the fourth quarter reflecting a further surge in inflation in and an additional squeeze in real income.