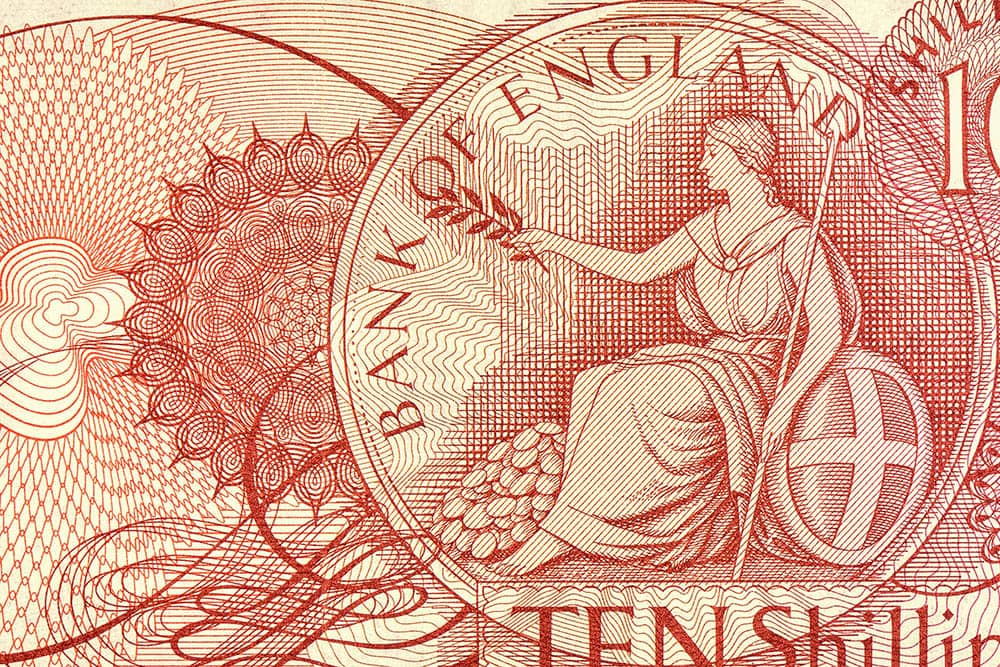 The Pound to Euro exchange rate has been hobbled alongside most other Sterling pairs but enters the new week couched in a pocket of important technical support levels on the charts and at a depth that creates opportunity for short-term dip buyers ahead of Thursday’s first-quarter GDP report.

Sterling was comfortably the worst performing G10 currency last week and also came close to the bottom of the G20 bucket following what some describe as a “rate protest” from the Bank of England (BoE).

“This came in the form of a three-year CPI forecast at 1.45% assuming market pricing for the policy rate. 1.45% is naturally well below the BoE's 2% medium-term target for inflation. Investors immediately lopped 25bp off their expectations for the cycle,” says Francesco Pesole, a strategist at ING. 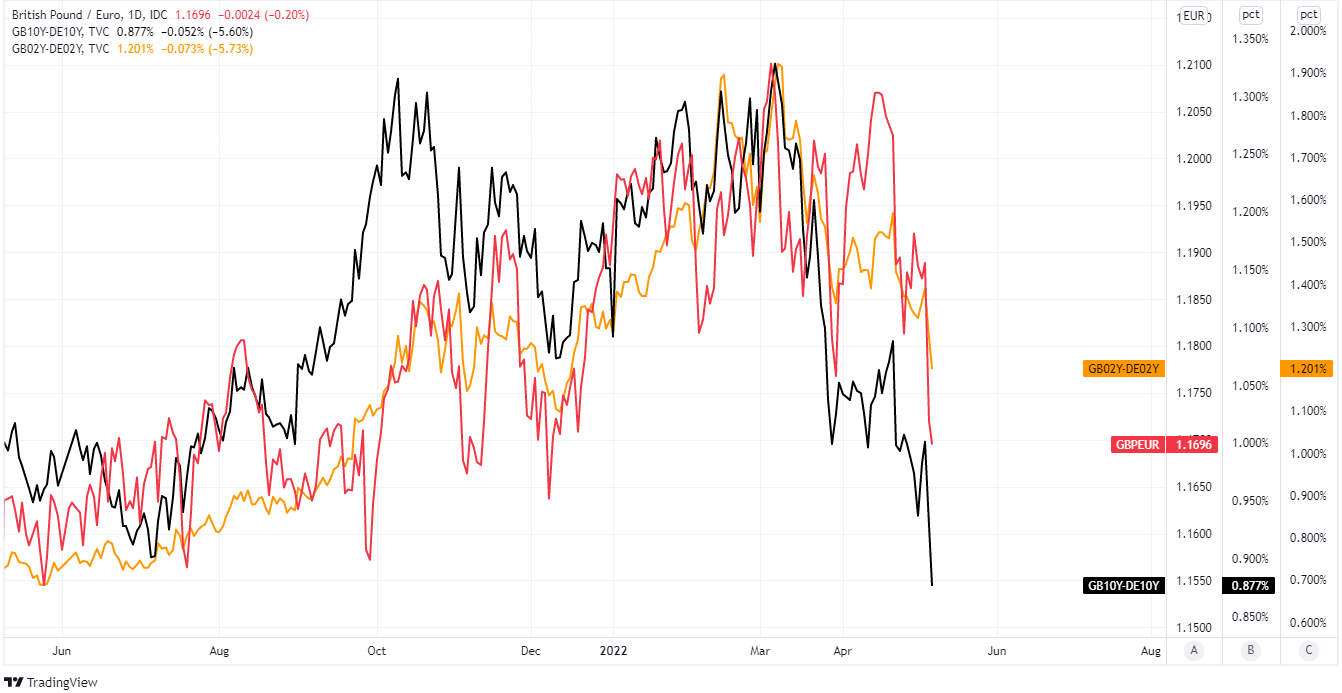 Above: Pound to Euro rate shown at daily intervals with spread - or gap - between UK and German government bond yields at 02-year and 10-year intervals. Click image for closer inspection.

The BoE took another step to withdraw the monetary stimulus provided to the economy during the coronavirus crisis and the years up to it last week by raising Bank Rate to 1% and the highest level since before the 2008 financial crisis.

It also said the Monetary Policy Committee would consider in August the questions of whether and when to begin selling some of the government bond acquired during the various periods of quantitative easing seen during the recent years, which is an upside risk for UK government bond yields.

But May's forecasts rankled with the market for suggesting the BoE is unlikely to meet recently inflated expectations for Bank Rate to rise further and as far as 2.5% by February 2023, prompting an extended sell-off in Sterling.

“This change in strategy means that other central banks are now responding more forcefully to the shifting inflation outlook than the BoE, which is weighing on Sterling,” says Michael Cahill, a G10 FX strategist at Goldman Sachs, who tips Sterling for a fall to 1.1494 against the Euro in the weeks ahead.

“We have grown increasingly negative on Sterling over the last couple of months because of these dynamics, and this week’s BoE decision increased our conviction. For this reason, we are raising the target and stop on our long EUR/GBP trade recommendation,” Cahill also said on Friday. 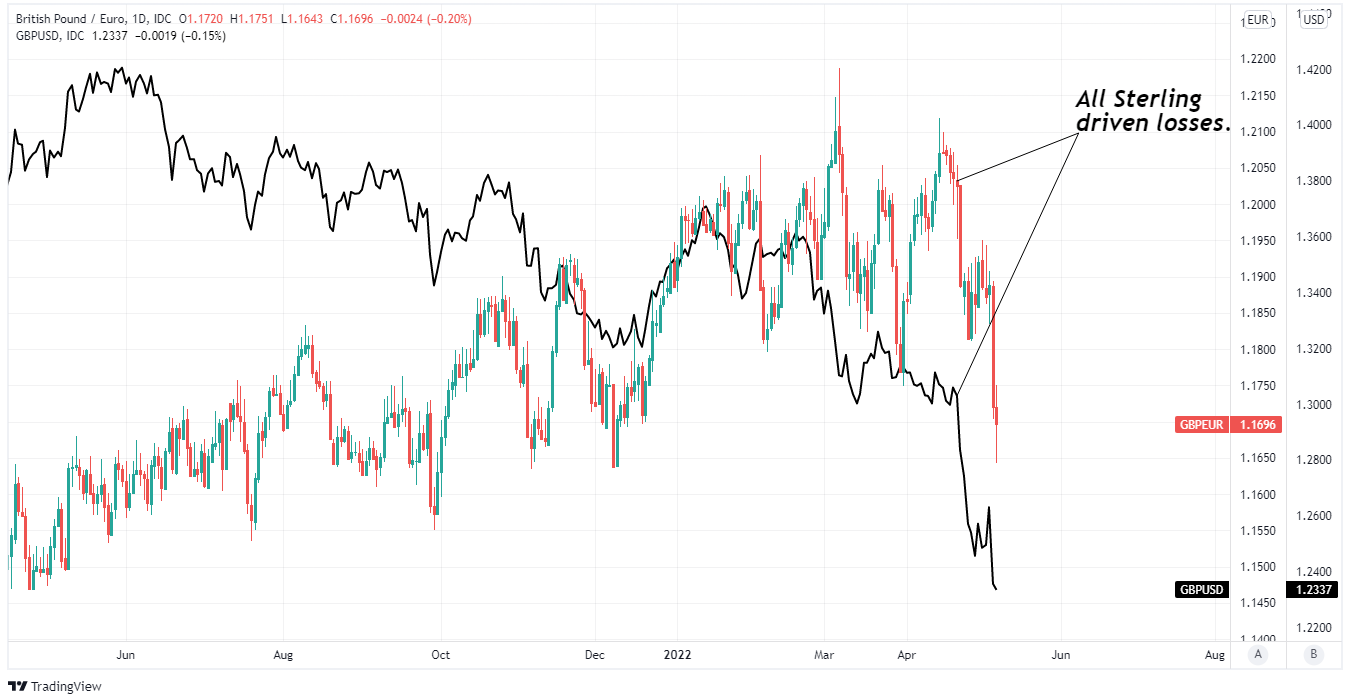 Above: Pound to Euro rate shown at daily intervals alongside GBP/USD. Click image for closer inspection.

The BoE’s pushback against market assumptions about the outlook for Bank Rate is an ongoing headwind that could limit the degree to which the Pound to Euro exchange rate and other Sterling pairs are able to recover from current lows during the weeks ahead.

However, and in the meantime there is some chance that Thursday’s release of first-quarter GDP data will lead the recently bearish currency market to pause, for thought, even if only monetarily, and more so if the data surprises on the upside of market expectations.

Many in the analyst community would disagree, however, and are increasingly anticipating further weakness ahead for the Pound to Euro rate.

“We continue to like EURGBP higher [GBP/EUR lower] as a broader forecasting theme, so we will look to use dips as buying opportunities. GBP's one bright spot lies in stretched market positioning and tactical valuations,” says Mark McCormick, global head of FX strategy at TD Securities.

Some measures of consensus suggest that economists generally expect the UK economic growth to have stalled in March and to have risen by around 1% during the first quarter as a whole, although many have also warned that these numbers will merely be the prelude to a poor second quarter. 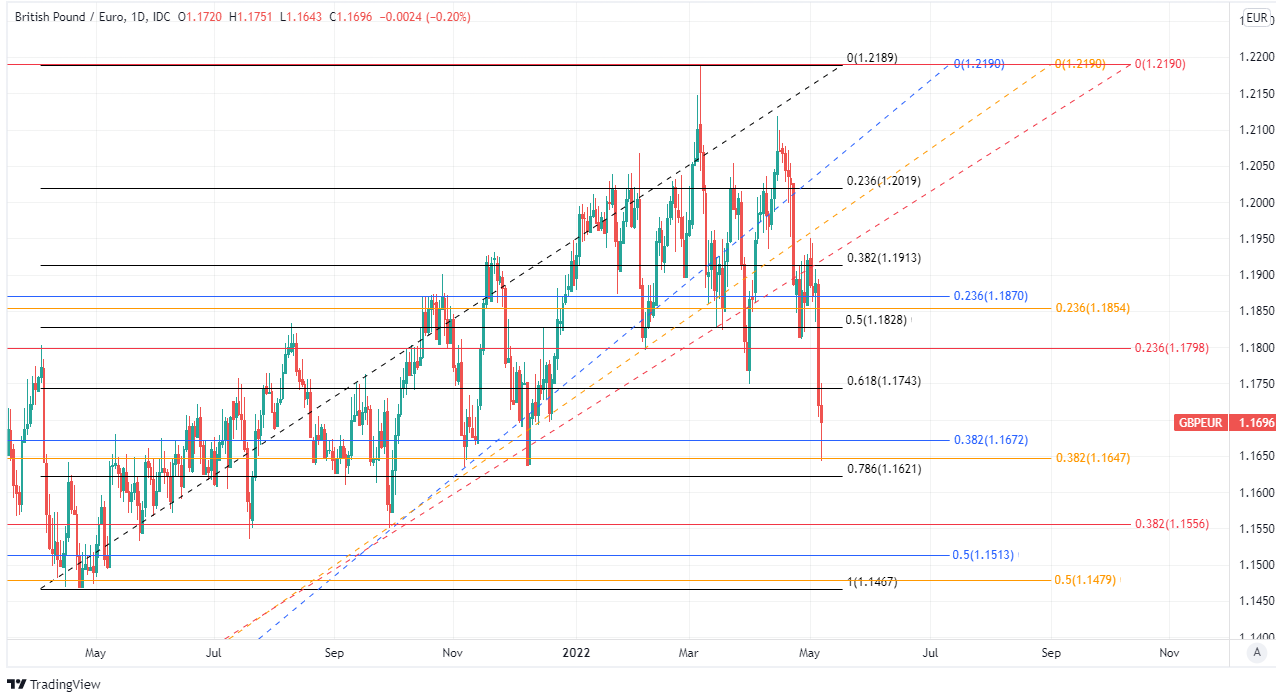 “For the first quarter as a whole, Bank staff now expected GDP growth of 0.9%, stronger than the flat quarterly outturn that had been incorporated in the February Monetary Policy Report projection,” minutes of last week’s Monetary Policy Committee meeting state.

“There had been increasing signs that the squeeze on real disposable incomes was starting to weigh on the household sector. Retail sales volumes had fallen by 1.4% in March, following a 0.5% decline in February, with weakness in fuel, food store and non store retailing,” the meeting record also states.

Whatever the outcome on Thursday, the Pound to Euro exchange rate goes into the release couched inside of a pocket of technical support levels that stretch from the 1.1678 level down to roughly 1.1621, between which Sterling could potentially stabilise over the coming days.

“We were recently short GBP versus the US dollar and that trade hit our take profit level but we feel we should still be short GBP and this time have chosen the euro as the currency to go long,” says Lee Hardman, a currency analyst at MUFG, who suggested on Friday that clients sell GBP/EUR.

“The BoE policy meeting this week makes it very clear that they are close to pausing, which was signalled by the grim forecasts for GDP and the fact that the inflation forecast for 3yrs [in a scenario] with rates left unchanged at 1.00% was actually very close to target,” Hardman also said on Friday. 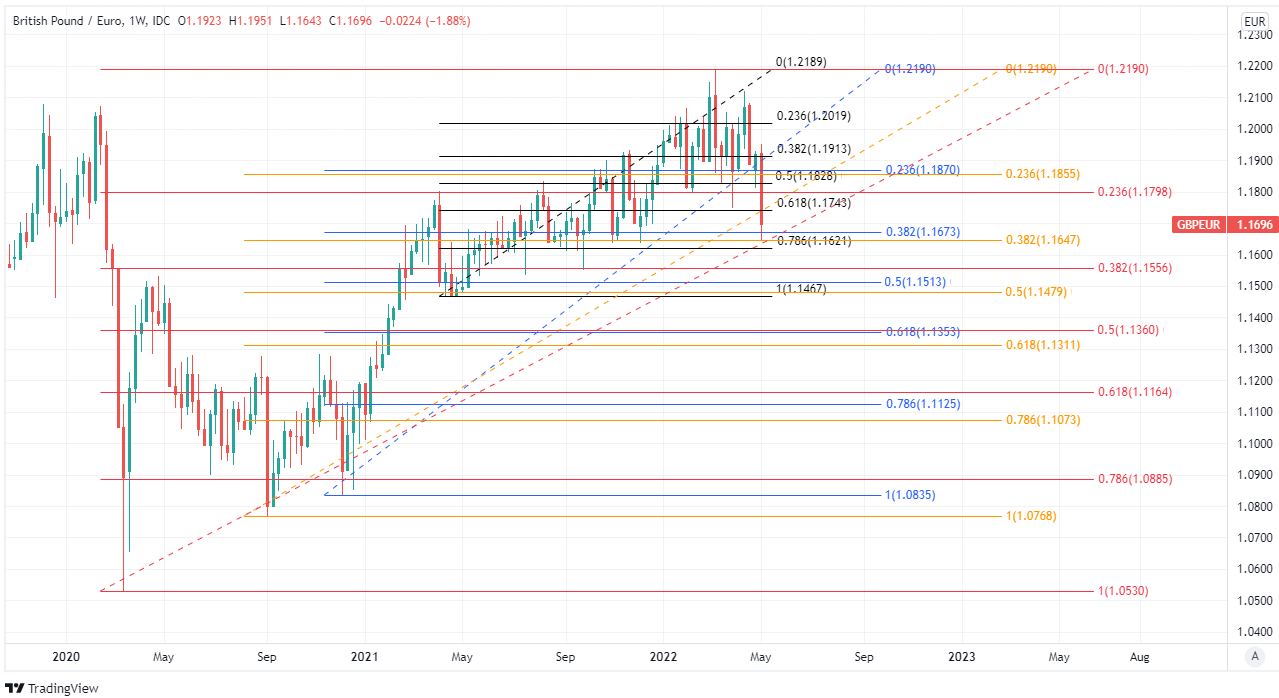