UK inflation is set to peak at 10% says TD Securities, delivering a surge in prices that will inevitably hit economic activity and send Pound Sterling lower against the Euro and Dollar in coming weeks.

In a monthly exchange rate forecast note the international lender and investment bank says the Pound could still remain supported against the Euro and Dollar in the near-term, but by mid-year the currency should be giving back value to both the Dollar and Euro.

"Inflation could hit nearly 10% in the coming months and will squeeze incomes and weigh on growth going forward," says Richard Kelly, Head of Global Strategy at TD Securities.

The call comes a day after the UK's Budget for Office Responsibility announced it was cutting its 2022 growth forecast from 6.0% to 3.8% in light of surging inflation, which is largely a result of Russia's invasion of Ukraine.

The UK is a major energy importer which means the effects of the war will be felt through higher heating bills and prices on fuel station forecourts.

But TD Securities see a peak nearer to 10% saying "inflation is not just an energy price story - it is rising across all major sectors."

The OBR says the rise in inflation means the people of the UK are set to see a record fall in living standards.

This will inevitably hit UK consumer and business sentiment and slow economic growth going forward, which culminates in this stark exhibit presented by TD Securities: 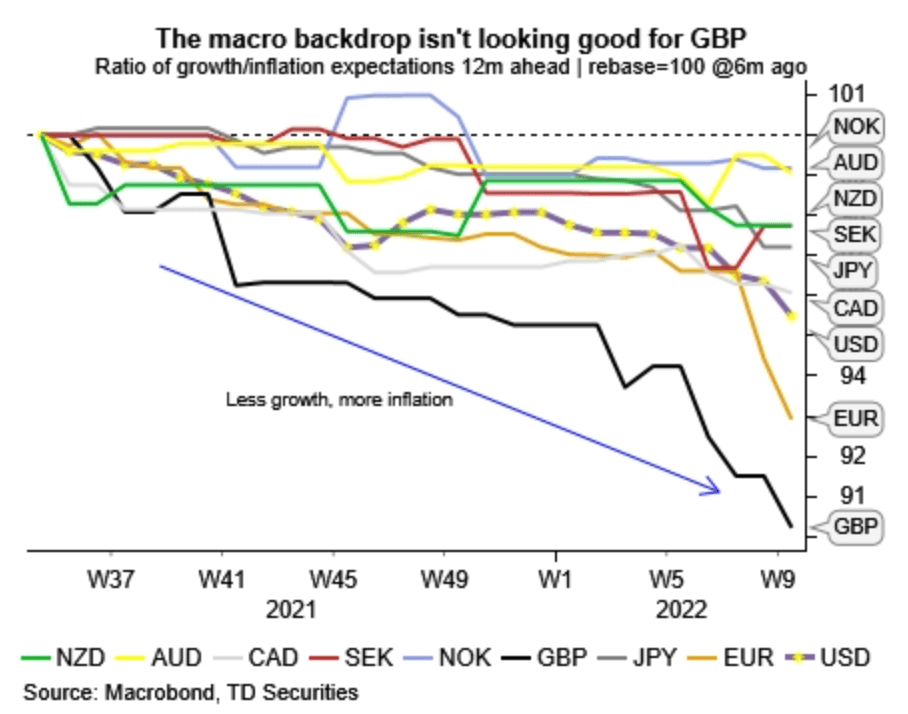 The Pound rallied into 2022 on the back of a December rate hike at the Bank of England and on an assumption further hikes were coming.

Two additional hikes followed in February and March, but at the occasion of the March hike the Bank of England sounded distinctly more cautious in its approach, warning inflation could snuff out the economic recovery and result in a sharp fall in inflation in coming years.

But TD Securities says there is still some juice left in the Pound's tank and near-term gains could see it rise to 1.21 against the Euro, but remain anchored around current levels against the Dollar.

A dovish pivot from the Bank of England will support front-end rates says Kelly, "which still remains rather hawkishly priced".

But any strength in Sterling should be sold into says Kelly who is looking for a more sustained rally by the Euro and Dollar as mid-year approaches.

"We think the next big move is higher and would look to use dips in that area to rebuild fresh long exposure," says Kelly, referring to EUR/GBP.