Pound Sterling stormed into 2021 with impressive gains but looks set to exit the year with a whimper as it struggles under all market conditions, although it could find itself still relatively supported against the Euro.

The Pound continues to underperform most of its G10 currency rivals, even amidst a clear shift in sentiment on global stock markets as investors arrive at the conclusion the Omicron variant is not the 'game changer' that was initially feared.

Laboratory findings from South Africa have found a significant reduction in the effectiveness of protecting against Omicron by vaccines and previous infections.

But Dr Alex Sigal, from the Africa Health Research Institute, said there was good news:

"Previous infection, followed by vaccination or booster is likely to increase the neutralisation level and likely confer protection from severe disease in Omicron infection".

The findings tally with what most scientists have been saying: the effectiveness of vaccines will be lowered but they will still offer protection against severe disease.

The findings could help support investor sentiment ahead of year-end.

Investors caught some pre-Christmas cheer and sent stocks surging on December 07 as fears concerning the Omicron variant of Covid-19 faded away, reversing the losses suffered in recent sessions.

Pound Sterling Live has regularly quoted analysts as saying the Pound tends to lose value against the Euro and Dollar in times of deteriorating market sentiment, which explained much of the Pound's December declines.

But if the rule is to hold firm the Pound should rally when sentiment turns around for the better, as has been the case over recent hours.

Elsewhere in the G10 space we can see other currencies are following this rule: the Euro has fallen as stocks rallied which is understandable given it was one of the clear winners of the recent market turndown: 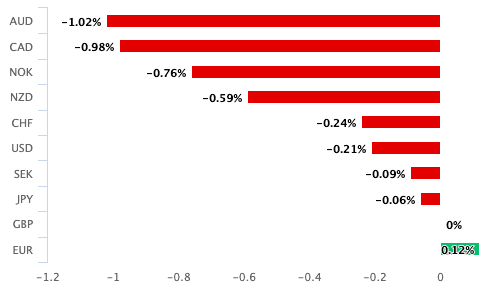 Above: The GBP and EUR were bottom of the pile amidst a sharp global market rally on Dec. 07.

Elsewhere the Australian Dollar and South African Rand lead the comeback, again this is consistent with the theme that swings in risk sentiment are driving currencies.

That the Pound is a loser in all weather could suggest a substantial turn in sentiment against the currency, but there is little by way of news to explain such an idiosyncratic development.

Expectations for a December rate hike all but faded last week when Bank of England 'hawk' Michael Saunders said it could be prudent to delay raising rates on account of Omicron uncertainty.

The odds of a December rate hike have fallen to ~33% - according to OIS markets - since Saunders hit the airwaves and suggests a decision to keep rates unchanged would be of little surprise.

Regardless, the Pound to Euro exchange rate is one pair that appears to be better supported in the current environment and further rises in stock market valuations could therefore offer further gains over the near-term.

The market has latched onto a popular view that Omicron is a milder version of the virus, with anecdotes out of South Africa being widely circulated.

Even the Chief Medical Adviser to U.S. President Biden, Dr. Anthony Fauci, has said the signals on Omicron's severity are "encouraging".

The market has therefore fixed onto a benign outcome to the variant.

"It looks like investors have made up their minds about Omicron. After careful consideration, they think it is probably no more dangerous than the Delta variant of coronavirus and that preventative lockdowns and restrictions that we have seen will soon ease. Another major economic shock will thus be avoided," says Fawad Razaqzada, Market Analyst at ThinkMarkets.com.

To what degree 'careful consideration' can be affixed to anecdotal evidence is yet to be seen, particularly as the Omicron wave is in its infancy, even in South Africa.

Nevertheless, "investors have been relieved to find out that Omicron hasn’t yet prompted a big rise in hospitalisations and deaths, while some pharmaceuticals (e.g., GSK) have revealed they have come up with treatment against the new strain," says Razaqzada.

GSK reported that its antibody-based therapy is effective against Omicron according to new data from early studies.

A key fear for markets - which was reflected in a softer Pound vs. Euro and Dollar last week - was that Omicron had an elevated ability to reinfect people who had previously been infected by other Covid variants.

This implied the potential for vaccine efficacy to wane; something that was widely expected by the scientific community since Omicron's discovery. However, scientists also believe vaccines will still offer substantive protection against severe disease. 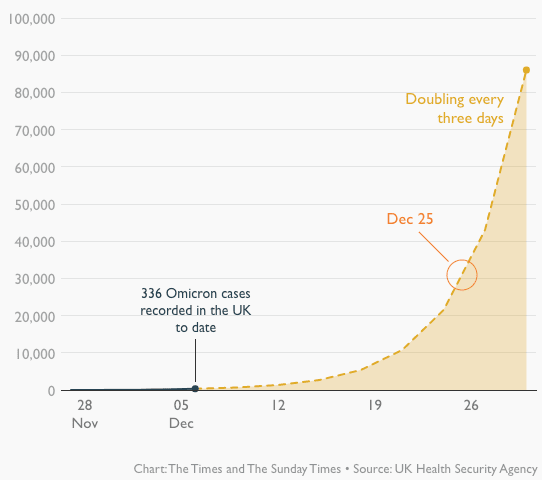 "How cases would grow by the end of the year if the number of Omicron cases spread as fast as feared" - The Times.

Omicron is set to become the dominant strain of the virus in the UK within weeks according to analysis of data from the UK Health Security Agency, which has found a rapid increase in the proportion of PCR tests showing a key genetic marker of Omicron.

But an advanced vaccine booster programme could mean harsh restrictions won't be necessary with Prime Minister Boris Johnson saying on Tuesday there were no imminent plans for further restrictions.

The UK has now boosted over 20 million people and leads its developed market peers on this count.

An analyst at Deutsche Bank has said the booster programme leaves the UK as one of "the best protected places in the developed world against Omicron," and the Pound could benefit as a result.

"For sterling ... the UK is likely to be the amongst the best protected places in the developed world against Omicron," says Shreyas Gopal, Strategist at Deutsche Bank in London.