The Pound is the best performing major currency of the past week, helped by a string of supportive economic data that includes Friday's consensus-beating retail numbers.

ONS data out on Friday showed retail sales rose 0.8% in the month to October, suggesting UK consumer activity is recovering ahead of the crucial Christmas period.

The figure represents a beat on market expectations for a recovery of 0.5% and it overcomes the 0.2% decline recorded in the month to September.

Furthermore, the numbers would have been more impressive were it not for the distortions created by the panic buying of motor fuel in September.

"The rebound in retail sales in October and the further improvement in the public finances will add to expectations that the Bank of England will raise interest rates from 0.10% to 0.25% in December," says Paul Dales, Chief UK Economist at Capital Economics.

The retail sales data makes it three out of three for the Pound in terms of this week's data releases: Tuesday's labour market numbers and Wednesday's inflation data combine with Friday's retail sales figures to provide upside support.

The Pound has risen to its highest level against the Euro in 2021 having advanced 1.43% this week. But, the Dollar remains difficult to beat with the weekly advance coming in at a more modest 0.7% gain. 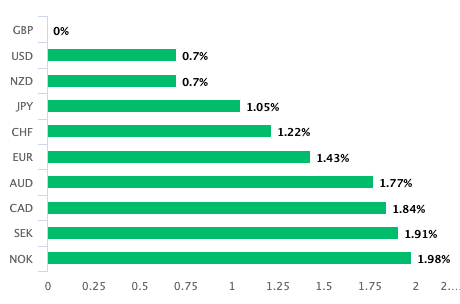 Above: GBP performance in the week to Nov. 19

Clothing stores sales volumes in October 2021 were only 0.5% below pre-pandemic levels in February 2020, with some retailers suggesting that early Christmas trading had boosted sales.

A downward drag to retail sales came courtesy of fuel sales volumes falling by 6.4% in October 2021 as they returned to more typical recent levels following the panic-buying growth of September.

Dales says the downward drag from fuel actually makes the headline data less flattering than it actually is: remove the contribution of fuel and you get some solid numbers. "The underlying trend is a bit stronger than the rise in total retail sales implies."

Food store sales volumes fell by 0.3% in October 2021, but despite the fall in October the ONS says volumes were 3.4% above pre-coronavirus pandemic levels in February 2020. 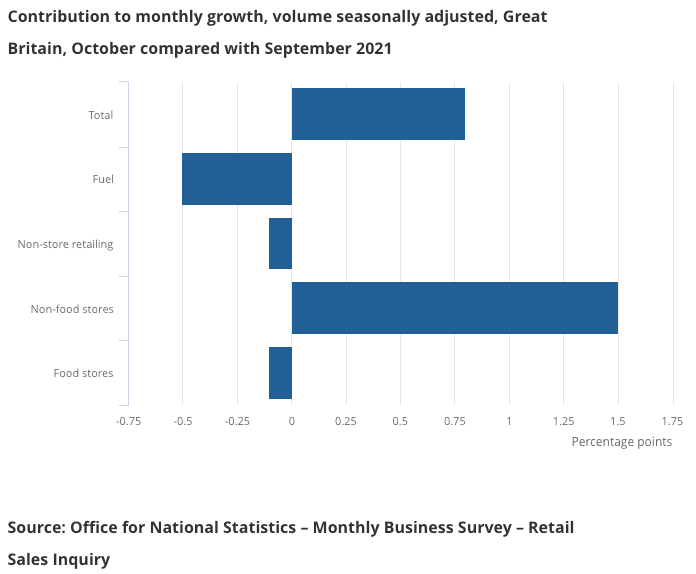 The ONS data dovetail with those of Barclaycard who this week reported rising confidence amongst small and medium sized businesses.

Rising confidence amongst SME owners sees 29% of respondents to a regular survey carried out by Barclaycard expecting their most successful festive period since 2015.

"There are signs Christmas has come early for retailers with many shoppers not waiting until Halloween was over before hitting stores, spooked by warnings that some gifts and toys could be in short supply this year," says Susannah Streeter, senior investment and markets analyst, Hargreaves Lansdown.

Fading Covid-19 fears are seen to be driving trends in retail with more workers returning to offices and shoppers now increasingly willing to return to the high street.

"Online sales dipped in October by 0.6% as shoppers appear more enthused and confident about hitting the shops," says Streeter.

The ONS says half of surveyed businesses report their employees are back in the workplace, up from a third in early September.

"Plenty of employees clearly want to put their best foot forward when it comes to meeting colleagues once more so revamping work wardrobes also seems to have driven sales," says Streeter.

The economist says the data will add to expectations the Bank of England will raise interest rates in December.

Some economists are however of the view that the boost to retail sales activity could be symptomatic of consumers buying early, fearing shortages over coming weeks.

The squeeze on global supply chains is keenly felt in consumer expectations and it therefore has the ability to potentially bring forward spending.

"It is possible that spending is merely occurring earlier in Q4 than would usually be the case rather than necessarily indicate a very strong Christmas sales season overall," says Sandra Horsfield, an economist at Investec.

"The pick-up appears to reflect consumers purchasing Christmas presents earlier than usual due to warnings about product availability, rather than a sustainable improvement," says Samuel Tombs, Chief UK Economist at Pantheon Macroeconomics.

Tombs says retail sales will likely will fall back in November and struggle to rise further over subsequent months.

He says households’ real disposable income will likely will drop by about 1.0% quarter-on-quarter in the fourth quarter due to soaring CPI inflation, a reduction in benefit payments and the end of grants to self-employed people.

He says households' real disposable income probably will drop by a further 1% in the second quarter of 2022, in response to the 1.25pp increase in the rate of employees' national insurance contributions in April, as well as a huge increase in Ofgem’s energy price cap of about 27%.