Investment strategists at international financial services giant MUFG have called time on their call for Pound Sterling to appreciate in value against the Euro, fearing an extension of the recent move lower in the UK currency.

MUFG initiated a call to buy Sterling against the Euro on July 30 (sell EUR/GBP), "but the failure to break the 0.8500 level on a sustained basis bodes poorly for the near-term outlook," says Halpenny.

The call comes amidst a strong bounce in the value of the Euro against the Pound: in the previous week the exchange rate rallied a percent, making for a second successive weekly gain. 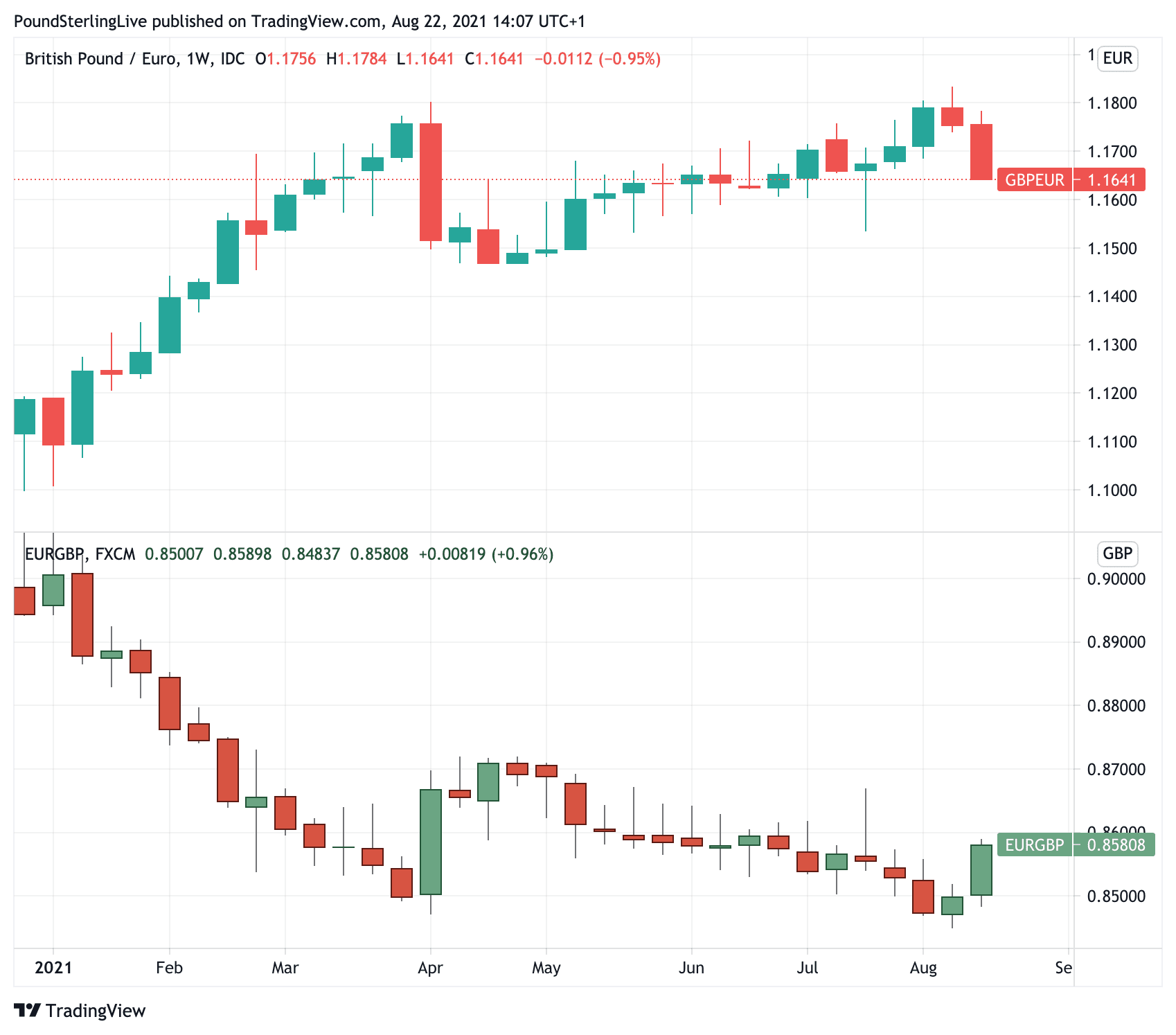 Above: GBP/EUR weekly (top) and the inverse EUR/GBP (bottom).

The declines in Sterling coincided with a broader sell-off in global equity markets, a deterioration that confirms GBP/EUR to be highly correlated with broader global trends.

We said last week that GBP/EUR would only likely start rising again were global investor sentiment to recover as they set aside fears of a major global growth slowdown linked to the spread of the Delta variant.

"The reason for the reversal of the EUR/GBP move lower is the increased risk-off trading conditions as COVID concerns globally increase," says Halpenny.

Concerns over rising Covid cases are presently centred on China and Asian economies.

But further concerns rest with the looming reduction of monetary support at the U.S. Federal Reserve, where an announcement on reducing quantitative easing (tapering) is likely to be made by September.

A potential market-positive shift could be triggered were the Fed to signal a delay to the 'taper'in light of rising covid cases in the U.S. and globally.

But MUFG sees prospects of these risk-off conditions continuing over the short-term, "which will potentially see GBP underperform EUR further," says. Halpenny.

Beyond the global picture MUFG note the UK domestic picture is no longer as compelling as had been the case when they initiated the call to buy the Pound against the Euro.

"The pound is also failing to derive support from a BoE guidance of modest monetary tightening being required, highlighting a degree of endorsement of the current market pricing on rates which incorporates a rate hike in 2022," says Halpenny.

The Bank of England on August 05 raised its inflation forecasts for the UK economy, signalling interest rates were expected if inflation were to return back to its 2.0% target over the medium-term.

MUFG are also watching the release of PMI data out of the Eurozone and UK this week, saying August's release could reveal larger declines in economic activity in the UK than in the euro-zone which could reinforce doubts over the resilience of the economy following last week's weaker than expected Retail Sales data.

From a technical perspective MUFG note EUR/GBP to be close to breaching the resistance trendline from the high in December last year and the high in July "which would likely prompt a further extension higher".