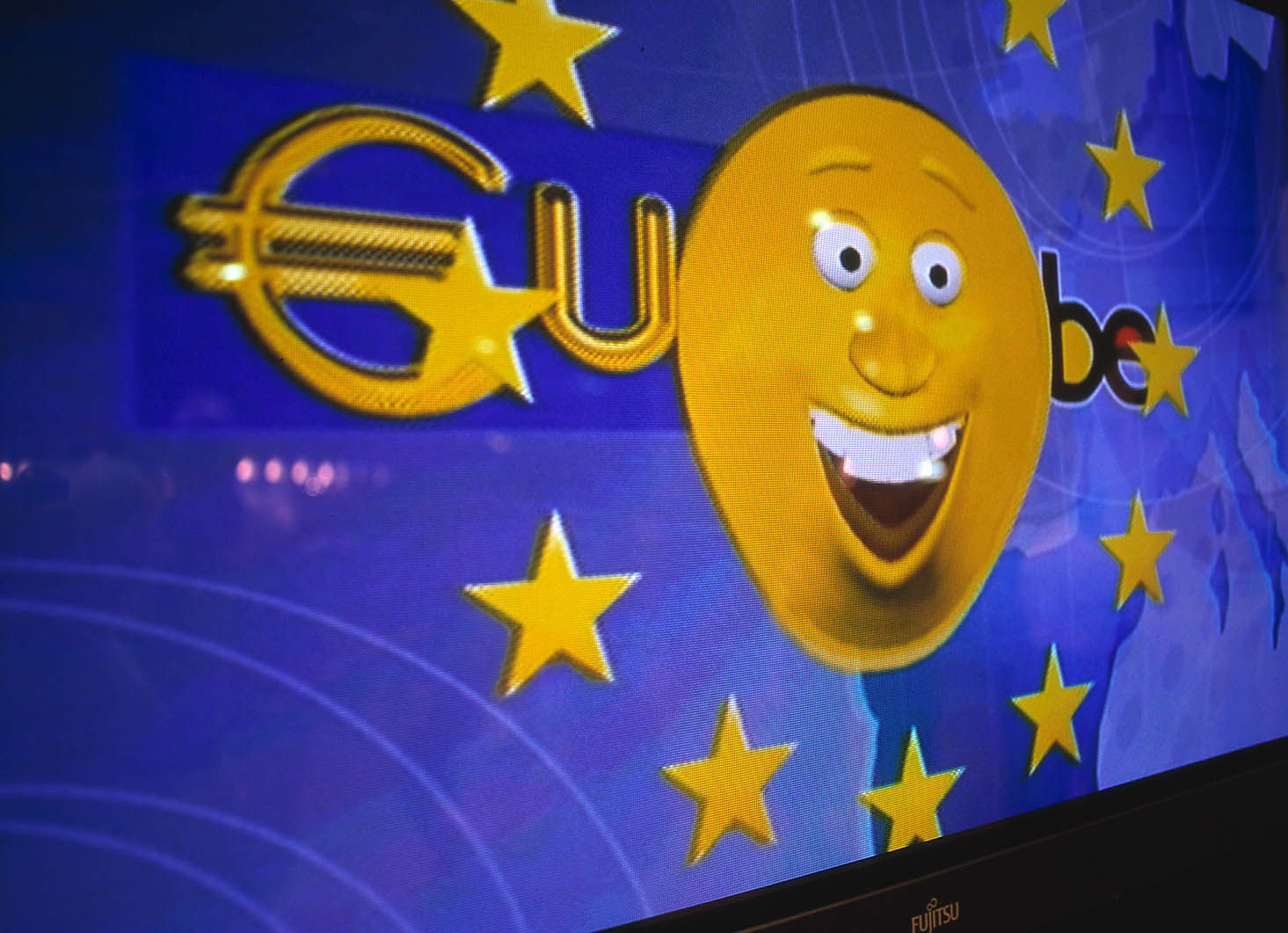 Sterling staged a vigorous recovery from late-May lows around 1.1550 seen last week to enter the new week close to 1.17 against the Euro, but after failing several times already of late to sustain itself above the level, the danger is now that nearby technical resistance around 1.1730 solidifies further and ultimately serves to sideline the Pound-to-Euro exchange rate into a consolidation range over the coming days.

This is with investors, traders, economists and the public facing a weeks-long wait to fully understand the implications of the latest wave of coronavirus infections and related hospitalisations, and notably if the government will find cause in them for new or reimposed containment measures that would inevitably curb the pace of the UK’s economic recovery.

“We estimate that the "pingdemic", which has contributed to 1.1 million people self-isolating in the week ending 14th July, could reduce monthly GDP by 0.5-1.0% and is surely exacerbating the current shortage of workers. That's not a huge hit to the economy and fewer people will be self-isolating after the rules change on 16th August. But it is clearly not helpful,” says Paul Dales, chief UK economist at Capital Economics, who forecasts the Pound-to-Euro rate to end this quarter and the 2021 year around 1.17.

Although many curbs on businesses were lifted last week, the details underlying Friday’s poorer-than-expected IHS Markit PMI surveys for the month of July indicated that quarantine rules relating to those who’ve been in contact with infected individuals were exacerbating staff shortages and crimping activity in some reopened sectors of the economy. 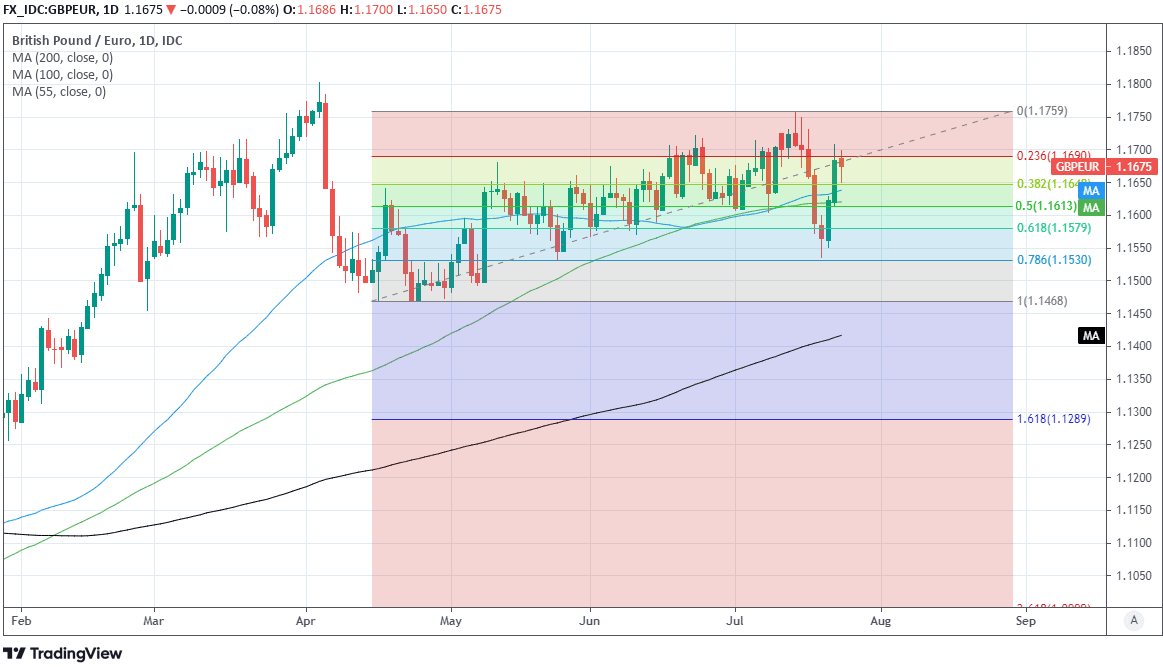 Above: GBP/EUR at daily intervals with selected moving-averages and Fibonacci retracements of April recovery indicating possible support levels. Last week’s Monday and Tuesday declines were arrested at the 78.6% retracement of that move near 1.1530 although a return toward these levels cannot be ruled out for the coming weeks.

Many economists are now warning of a potentially bumpier path ahead for the recovery.

“Most other indicators also suggest the recovery has stalled, temporarily, due to the third wave of Covid-19. For instance, the ONS’ Business Impact of Covid-19 survey shows business turnover has flatlined since the second half of May,” Tombs adds.

Office for National Statistics data will reveal on August 12 whether the UK’s second quarter economic rebound lived up to lofty expectations, although monthly numbers covering the May period already indicated earlier in July that it may have underwhelmed while recent unofficial survey data including Friday’s PMI surveys have flagged a possible softening of momentum at the opening of the third-quarter.

Meanwhile, the latest commentary from Bank of England policymakers has cultivated an impression in the market of there being a fine balance between Monetary Policy Committee (MPC) members’ who view the BoE’s policy settings as appropriate for the foreseeable future, and those who think it could soon be necessary to reduce the degree of monetary support provided to the economy through the bank’s interest rate and quantitative easing policies.

This apparent balance is one of the factors which appeared to dampen enthusiasm for the Pound last week, being revealed so soon after MPC members Michael Saunders and David Ramsden had indicated they were erring into the latter camp, and is something that could only be reinforced by any further signs in the weeks ahead of economic turbulence or slowing of the UK’s recovery.

"Of interest next week (Monday 26th July) will be any comments on the outlook from external member Vlieghe," says Abbas Khan, an economist at Barclays. "Vlieghe surprised the market in his previous speech (27 May) when he argued that his central scenario saw the first hike in Bank Rate at the end of 2022, despite a largely cautious take on the outlook."

The week ahead is devoid of major UK economic numbers although a 12:00 Monday speech from the outgoing BoE policymaker Gertjan Vlieghe could garner attention given the balance on the BoE’s rate setting committee.

It may be likely to have at most only a temporary impact on Sterling however, given that his term on the MPC ends following next month’s meeting. 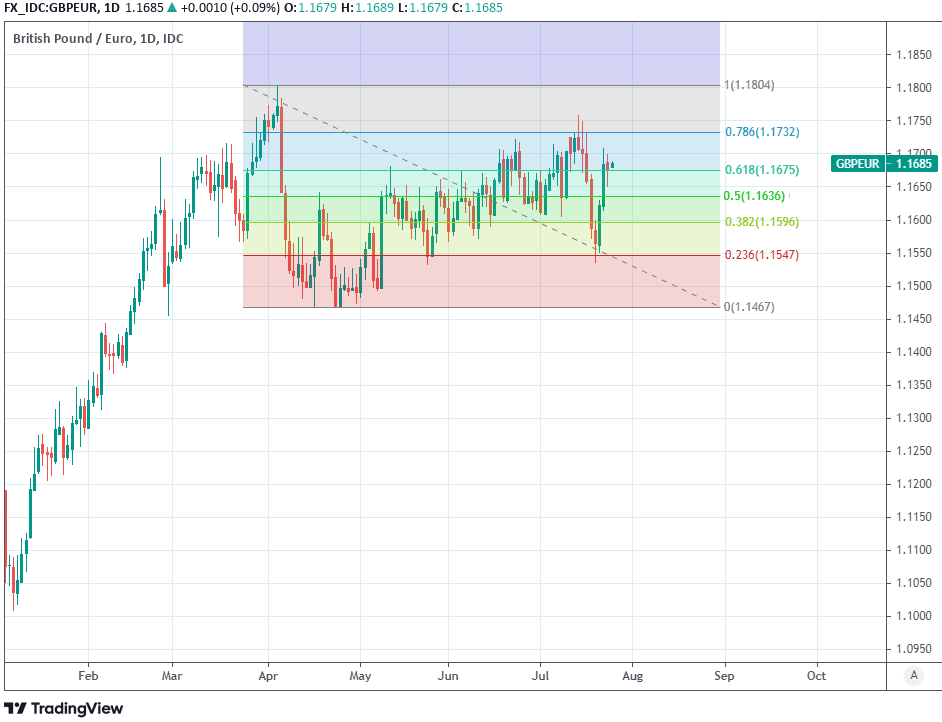 Above: GBP/EUR at daily intervals with Fibonacci retracements of late March fall indicating possible resistance levels. The Pound has repeatedly failed to achieve a daily close above the 78.6% retracement at 1.1732, which may now be solidifying as resistance.

Meanwhile, the coronavirus remains rampant not only in the UK but also internationally, making it an ongoing risk to the global recovery and currencies which are sensitive to any deterioration of investors’ appetites for risk assets, including the Pound.

The highlight of the week ahead however comes from across the Channel where Eurozone second-quarter GDP data is due out alongside inflation figures for the month of July on Friday, and could act as a last minute headwind for the Pound-to-Euro exchange rate.

There is a risk of an upside surprise in the growth data given the strength of other recent figures and extent to which expectations of the bloc were adversely impacted by earlier difficulties with vaccine procurement.

Consensus looks for the economy to have grown at a quarter-on-quarter pace of 1.5%, reversing its -0.3% contraction from the opening months of the year, although some economists look for a stronger number.

“We expect euro-area GDP to have grown 1.7% q/q in Q2 after contracting 0.3% in Q1. Manufacturing and services PMIs both remain elevated, while hard data releases point to a mixed recovery – euro-area retail sales have recovered to pre-pandemic levels, but industrial production remains subdued due to prolonged supply-chain disruptions,” says Christopher Graham, a Europe economist at Standard Chartered.

“We expect the pick-up in economic activity to strengthen in Q3, as indicated by recent high-frequency data,” Graham adds.