- GBP/EUR supported at 1.16, eating away at 1.17 resistance
- June’s inflation and jobs data the highlights for GBP from UK
- But international factors in driving seat; posing upside risks

The Pound-to-Euro exchange rate enters the new week underpinned by support at 1.16 while eating away at resistance at 1.17, near to three-month highs, although international factors are clearly in Sterling’s driving seat at present and these could be a trigger for volatility in the week ahead.

Sterling was the third best performing major currency of the week by Friday’s close after widespread declines in Dollar exchange rates reversed what was previously a fractional decline in GBP/USD, elevating the Pound higher in the league table by one spot at the expense of the greenback.

The Pound-to-Euro exchange rate closed on Friday and will enter the new week at 1.1700, close to its highest since the early morning of April, after having overlooked May GDP data which undershot market expectations by some distance and came alongside a downward revision to April’s estimate.

“The disappointing 0.8% m/m rise in GDP in May (consensus +1.8% m/m) left the economy 3.1% below its February 2020 pre-pandemic peak and suggests that the economy won’t return to the pre-crisis level until a couple of months after our previous forecast of August,” says Paul Dales, chief UK economist at Capital Economics.

“The reopening of indoor hospitality in mid-May was the main driver of growth as a 37.1% m/m leap in output in the accommodation & food sector contributed 0.7ppts to the overall 0.8% m/m rise in GDP,” Dales adds.

The immediate implications of the softer-than-anticipated recovery from the ‘lockdown’ which carried over into the New Year are limited, although this Wednesday and Thursday inflation and jobs data could garner closer scrutiny than otherwise as a result of it. 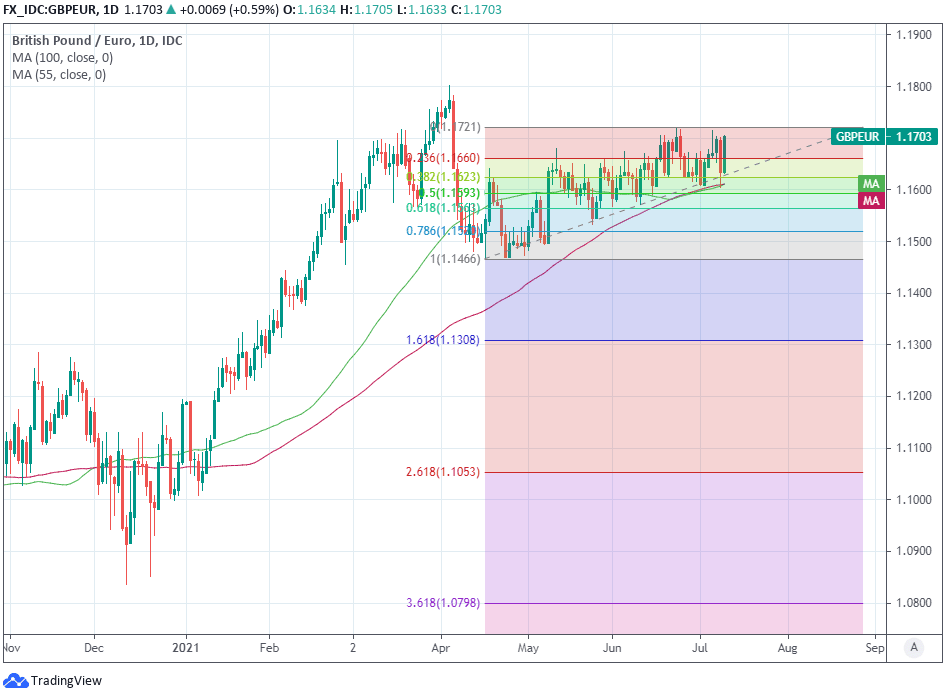 The Pound-to-Euro exchange rate is underpinned by a cluster of technical support levels around the 1.16 threshold including the 61.8% Fibonacci retracement of its April recovery at 1.1593 as well as its 55 and 100-day moving-averages just above 1.16.

Both moving averages appeared to arrest last Thursday’s sell-off, which mounted when the Euro rose after the European Central Bank (ECB) announced a new and higher inflation target that may have been less aggressive than some in the market were anticipating.

“The week’s news on the UK recovery was decidedly mixed. On the plus side, most of the remaining restrictions are likely to be lifted on July 19, which should provide a further boost to activity. But May’s GDP release disappointed with several sources of weakness, some of which may endure,” says Andrew Goodwin, chief UK economist at Oxford Economics.

Inflation figures for the month of June are out at 07:00 on Wednesday, which investors will use to assess the degree to which the Bank of England’s (BoE) 2% target is likely to be overshot in the coming months, with upside surprises potentially lending support to Sterling.

Thursday will see June job data released, which the market will watch closely in order to gauge the speed at which employment is normalising following this year’s reopening of the economy as well as the overall condition of the labour market ahead of July, which is when HM Treasury begins to wind down the furlough scheme that helped minimise the increase in unemployment caused by the government’s response to the pandemic.

But looking ahead, and if last week’s price action is anything to go by, it could be international factors such as the trajectory of the Dollar and economic figures emerging from larger economies like the U.S., Eurozone and China which have a greater bearing on Sterling again this week.

"This is not the targeted cut mentioned in an important government meeting, and sends a bad signal," says Iris Pang, chief economist for Greater China at ING.

Friday’s Dollar sell-off and the Pound-to-Euro rally came after the People’s Bank of China (PBoC) injected stimulus into the world’s second largest economy by cutting the required reserve ratio for all domestic banks, meaning they can now draw down on regulatory capital worth an estimated RMB 1trillion (£112billion) in order to support lending to companies of all shapes and sizes. 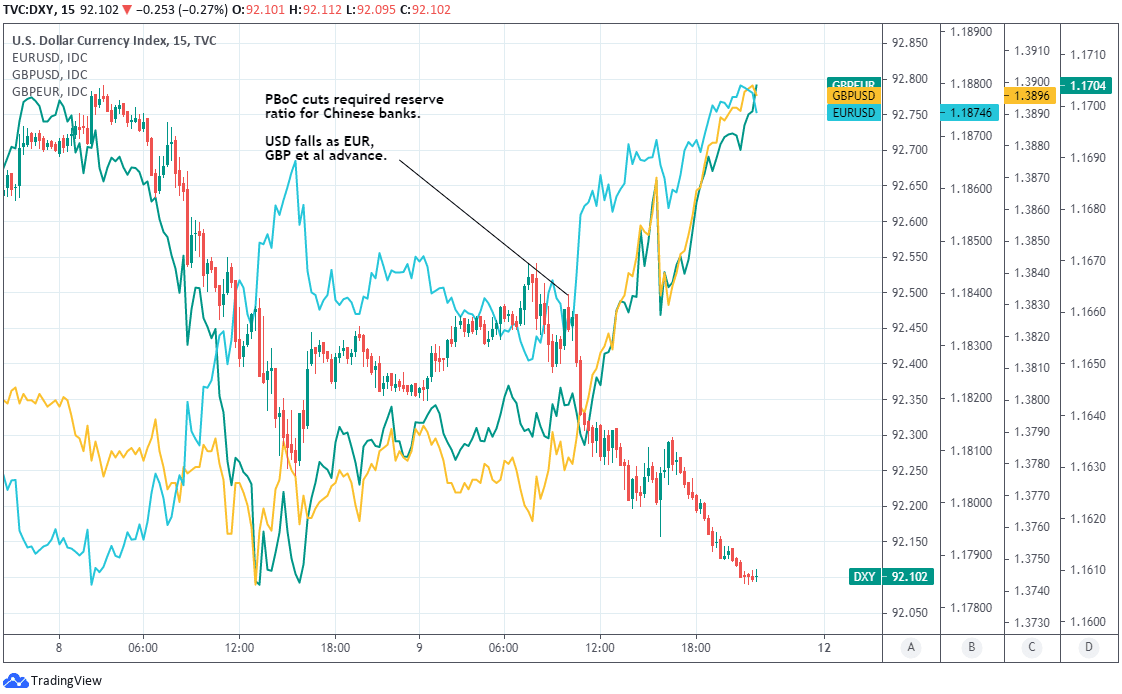 Above: U.S. Dollar Index shown at 15-minute intervals, alongside GBP/USD, GBP/EUR and EUR/USD.

But Friday’s move has been interpreted by some economists as a sign that the economy is in a more fragile condition than is commonly conceived, which could potentially mean the PBoC’s response was misinterpreted by the market and will almost certainly heighten investors’ focus on Thursday’s second-quarter GDP data from China.

China’s State Council had floated the idea of a more targeted cut that would’ve increased lending to only a handful of troubled sectors, so the PBoC’s immediate move to provide support to all sectors has prompted concern in some parts.

"Let me be plain, this RRR cut is not a positive signal. Volatility in the market could well increase," ING’s Pang warns.

There’s a danger that Thursday’s GDP underperforms market expectations, cultivating scope for further stimulus from the PBoC and potentially leading the Renminbi to weaken in price action that may cut either way for currencies like Sterling.

The data is due out in the early hours of Thursday morning and much may depend for the Pound on how the Dollar and Euro respond to it.

Many currencies are positively correlated with the Renminbi including the Pound so anything which leads the USD/CNH exchange rate to rally is something that could potentially incite volatility elsewhere.

A rise in USD/CNH would denote a falling Renminbi in this instance, which is something that can lead to widespread Dollar strength if it happens to trigger losses in other non-Dollar currencies.

The Pound-to-Euro exchange rate's response to any strengthening of the Dollar has been mixed in 2021, although often Sterling has held up better than many other currencies including the Euro since late in the first quarter.