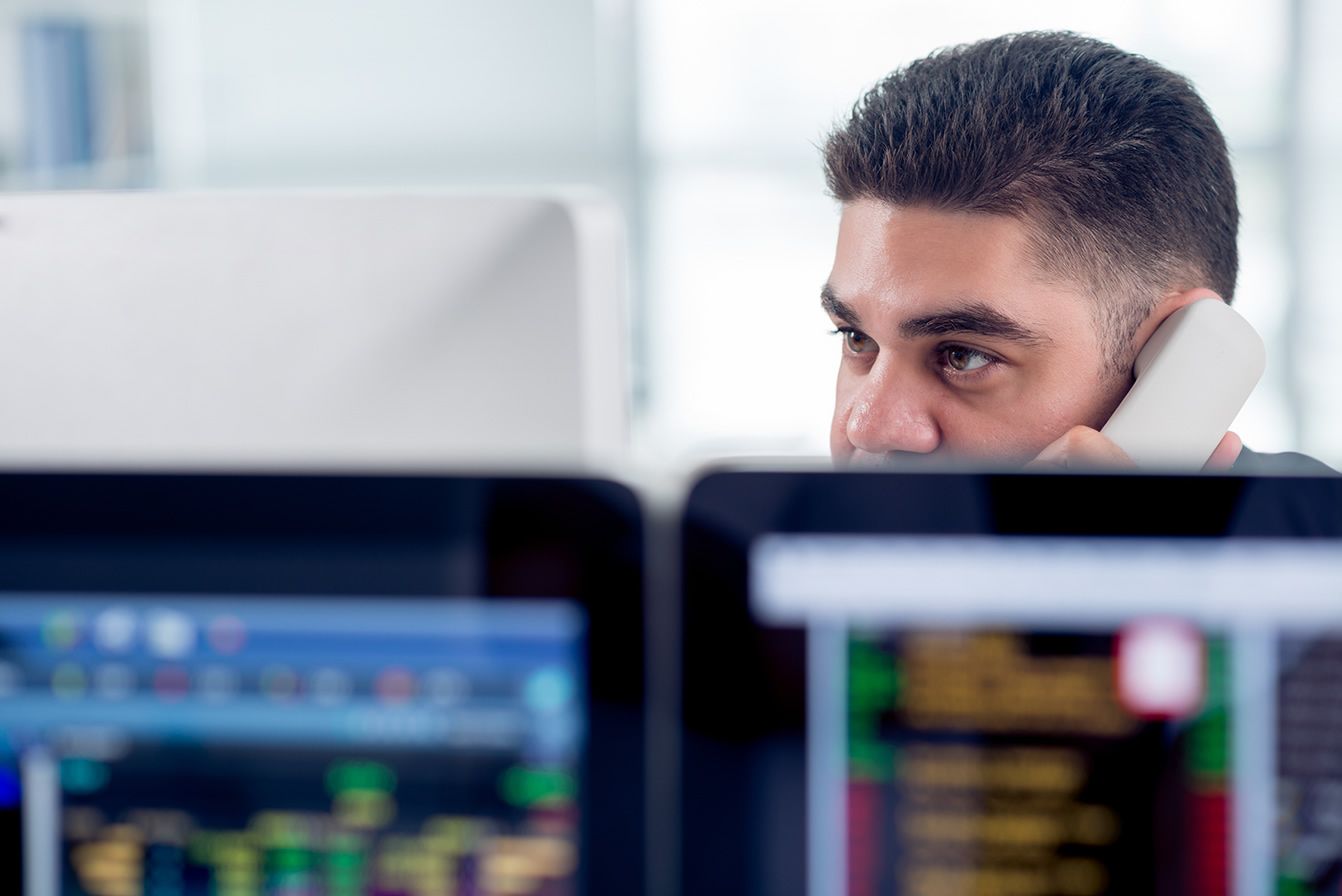 The Euro appears to be one of the major losers of the U.S. Federal Reserve's shift in stance on monetary policy, particularly against the British Pound which has reached its highest levels against the single-currency since April.

This shift in expectation is considered to be a 'hawkish' one in that it means the central bank is increasingly looking to a future of higher interest rates based on current economic trends.

When a central bank makes such a shift its currency tends to rise relative to those belonging to central banks sitting on their hands.

What happens at the Fed matters not just for the Dollar but for all major currencies given central bank policy is a key driver of value at present.

The Fed and Bank of England are now tipped to raise interest rates well before the European Central Bank, and this is aiding the Pound and Dollar against the Euro. 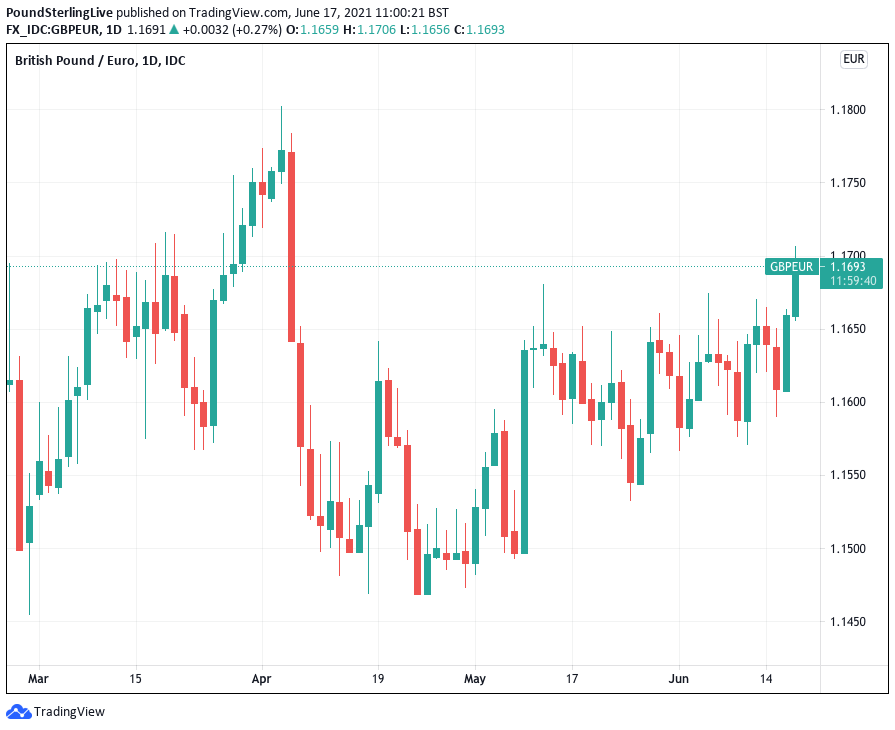 Above: GBP/EUR has reached its highest level since April.

The Pound-to-Euro exchange rate (GBP/EUR) rallied to 1.17 in the hours following the Fed decision, the rise coming courtesy of the decline in the Euro-Dollar exchange rate (EUR/USD) to below 1.20.

We are therefore witnessing a mechanical reaction in currency markets that is aiding GBP/EUR as opposed to some genuine strength centred on the Pound, indeed there is currently very little of interest concerning the Pound in both the economic and political sphere.

Therefore, further declines in EUR/USD would be needed to pull EUR/GBP down further and thus raise the Pound's value. 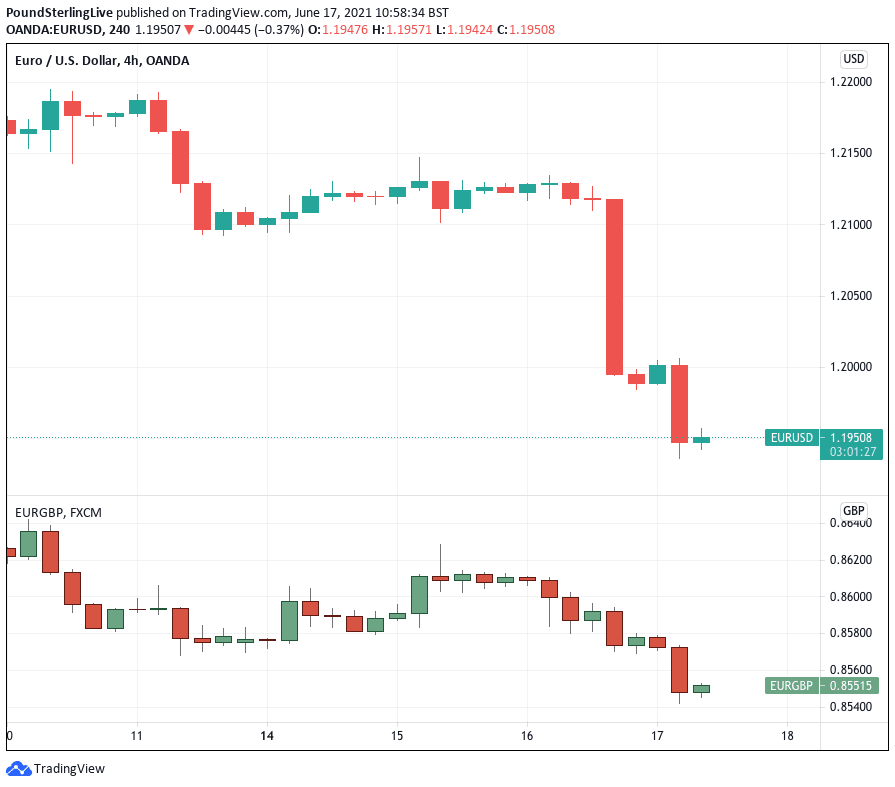 Above: The EUR/USD (top pane) is dragging on EUR/GBP (bottom pane).

Following the Fed decision the Dollar Index - a measure of the U.S. currency against its most frequently traded rivals - saw its largest one day gain since September 21 last year.

This was after a majority of Fed policymakers indicated using the ‘dot-plot’ of individual rate setters’ forecasts that they may now be minded to begin lifting U.S. interest rates as soon as the end of 2023 rather than in 2024.

"The market reaction was fierce as the hawkish message came like a bolt out of the blue, propelling the dollar much higher and demolishing gold prices. Stock markets struggled as well, although the fallout was contained, signalling that equity traders didn’t panic at the first sign that excess liquidity will be drained from the system," says Marios Hadjikyriacos, Investment Analyst at XM.com.

Looking ahead, where the Euro-Pound exchange rate heads next could therefore well depend on near-term direction in the U.S. Dollar.

Hadjikyriacos says there is a technical element at play whereby the mark was heavily positioned against the Dollar heading into the midweek event and therefore some clearing out of positions might be underway.

Once this positioning cleaning ends the Dollar could find its impetus wanes.

But, Hadjikyriacos says we could in fact be looking at a decisive shift in fortunes for the Dollar.

"The question is whether this was an overreaction because of stretched positioning or whether it marks the beginning of a lasting rally. At this stage, the tea leaves point to the latter. The endgame was always going to be a stronger dollar once the Fed got the normalization train rolling, but there was considerable uncertainty about the timing and pace. This decision accelerated the whole process," he says.