- GBP/EUR support at 1.1460 in landmark week
- Global mood sets tone ahead of BoE main event
- Could clear way for attempted recovery of 1.17

The big question for the week ahead is whether the Bank of England's (BoE) May policy decision is enough to release the Pound-to-Euro rate from a persistent if-not apprehensive observance of the 1.15 threshold.

Pound Sterling has been champing at the bit to lift off from the level but several times proved unable to sustain a move higher and may now find that even more difficult ahead of Thursday when the BoE sets out its latest assessment against a backdrop of local elections in the UK.

“Although the Scottish elections may bring some negative headline news about another Scottish independence referendum, we don’t think this should have an overly negative impact on GBP,” says Petr Krpata, chief EMEA strategist for currencies and interest rates at ING. 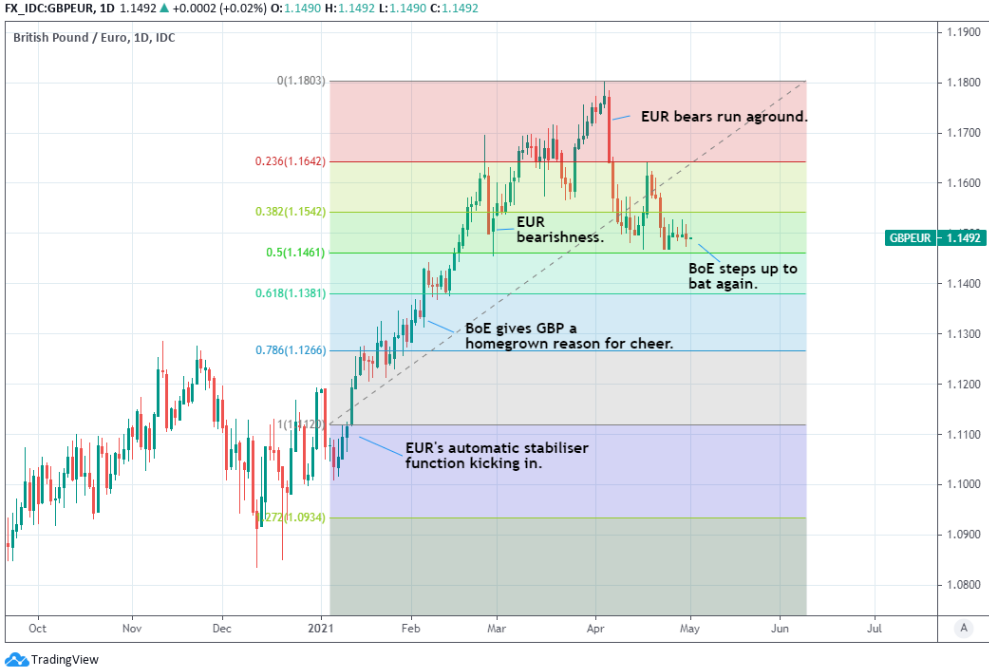 Above: GBP/EUR at daily intervals with Fibonacci retracements of key January bid.

In addition they note that the "risk premium" which weighed on the Pound for years as a result of the Brexit matter never actually began to impact the currency until around six months before the referendum.

With risk premiums aside, the main channel through which the Scottish question might eventually impact Sterling is the foreign direct investment route, which is worth watching over the coming years according to Jordan Rochester at Nomura, whose weekly podcast readers might find to be a helpful resource.

“I do not believe the event is important, but the market might care for a few days,” says Brent Donnelly, a spot FX trader at HSBC.

The author wouldn’t personally give ‘Scottish Independence’ bandwidth until it becomes an issue at the BoE.

The aftermath of recent global market volatility is a different matter however, and not least because last weeks surge in Dollar exchange rates appeared to enable the Dollar-earning FTSE 100 to act as a form of magic carpet for the Pound-to-Euro rate as it outperformed U.S. and all other European benchmarks. 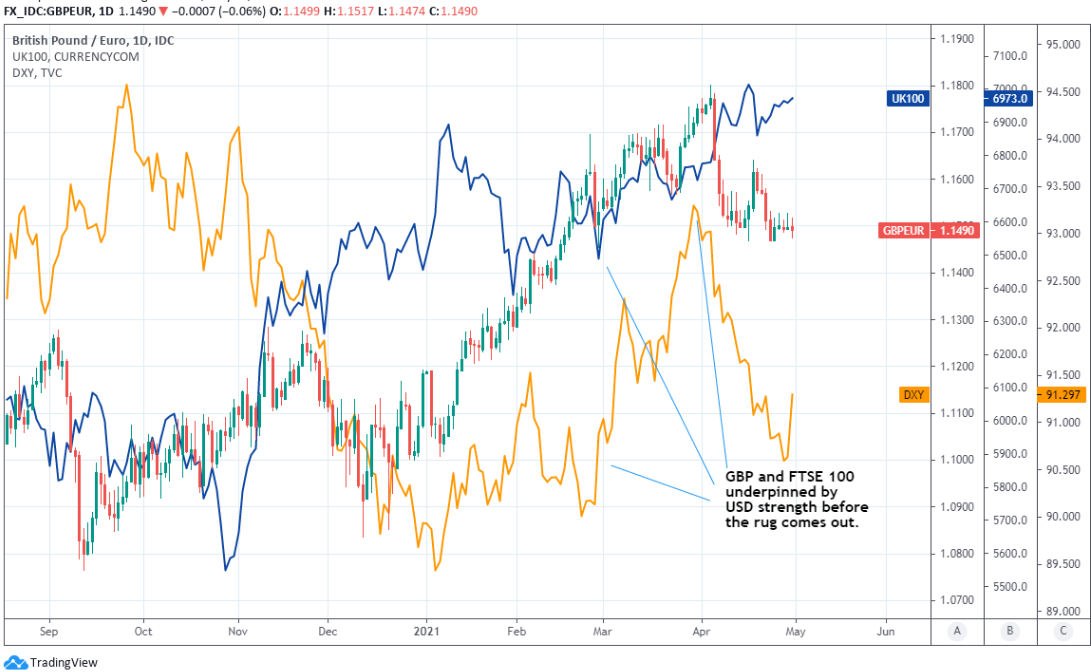 Above: GBP/EUR at daily intervals with FTSE 10 (blue) and U.S. Dollar Index (orange).

This is important because to the extent that the FTSE 100 did underpin Sterling then stability returning to global markets this week could act as an early restraint over the coming days.

Any unwinding of the FTSE 100’s outperformance may be a temporary headwind, although the 1.1460 area has repeatedly offered strong support to GBP/EUR.

Jones is a buyer of the Pound-to-Euro rate from near current levels and has tipped clients that Sterling’s continued aversion to the land below 1.1460 (0.8725 in EUR/GBP) would be indicative of an eventual recovery to 1.1719. 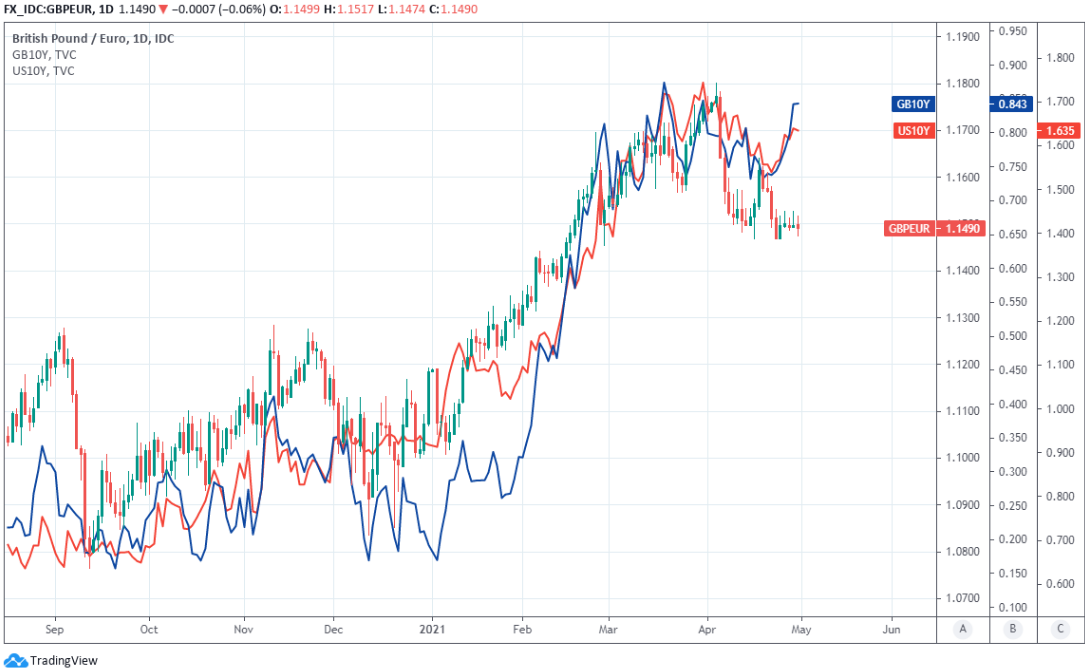 The Pound may struggle to gain traction until after Thursday when Governor Andrew Bailey and the Monetary Policy Committee will set out their views and expectations for the recovery now that supposedly non-essential businesses are reopening.

The BoE is widely expected to leave Bank Rate unchanged at 0.10%, although whether it announces a sooner-rather-than later curtailment of its bond buying programme or gives any guidance on the likely timing of an eventual increase in interest rates could have a formative impact on appetite for Sterling beyond this week.

The Pound-to-Euro exchange rate has recently seen highs of 1.18 and could be likely to find its way back there in the weeks after the paralysing glare of the BoE’s headlights begins to fade.

“The market has priced in an additional 53bp of rate hikes by end-2024 since the BoE's February forecasts. We expect the BoE to endorse those expectations in next week's Monetary Policy Report by forecasting inflation at or slightly above target 2 years ahead,” says Robert Wood, a UK economist at BofA Global Research.