The Pound-to-Euro exchange rate dropped at the start of the new week and is susceptible to further losses that could quickly take it back to multi-month lows as a new strain of coronavirus draws its first blood from the economy and an ongoing Brexit stage drama leads the clock to run down in the negotiations.

Sterling had been under pressure ahead of the weekend as Brexit talks yielded no breakthrough and new risks emerged including fears any eventual agreement would not be ratified before year-end, new threats of a 'no deal' Brexit and the government's latest coronavirus closures that will likely ensure the Pound enters the new week on its back foot.

The government is urgently seeking to determine if a new strain of the virus is any more deadly than the other and whether it'll respond to the coronavirus vaccines on which currencies, investors, political leaders and people alike have staked their hopes for a 2021 economic recovery.

"The new strain can spread more quickly. We have alerted the World Health Organisation," says Chris Whitty, England's Chief Medical Officer. "There is no evidence to suggest the new strain causes a higher mortality rate or that it affects vaccines and treatments although urgent work is underway to confirm this."

Government scientists had already said it is up to 70% more contagious.

EU countries had responded over the course of Sunday and announced the closing of their borders with the UK, fearing the new strain will accelerate the spread of the pandemic.

France closed its borders to all UK traffic, including freight, making for significant tailbacks heading into Dover.

This will pose a significant threat to trade and the UK economy.

The new variant of the sometimes-pneumonia inducing coronavirus was cited for a Saturday decision by the government to return vast parts of England to a state of 'lockdown,' dealing a fatal blow to the Christmas economy this weekend, and was also behind a decision by the Netherlands to ban flights from the UK.

All supposedly non-essential businesses will now close at least until year-end and restrictions on movement will be renewed, although it's the uncertainty over whether the new strain can be contained using existing vaccines which may be the greatest risk to Sterling.

"Due to its large services sector and its woeful Covid-19 infection rates, the UK economy has been particularly hard hit by the pandemic. While it has been early to start a vaccination programme, the economic rebound is likely to be hit by scarring," says Jane Foley, a senior FX strategist at Rabobank, who forecasts the Pound-Euro rate to remain below 1.1363 throughout 2021.

Investors could question this week whether the economy's recovery prospects have really improved with an early stage rollout of the vaccine made by Pfizer and BioNTech, given the government is now using thus-far ineffective containment measures against a more infectious variant of the disease.

With the Brexit clock also ticking down, this could potentially be a recipe for underperformance by the Pound in what will be quiet holiday markets.

"GBP is up on the week but that will only be sustained if a trade deal is agreed over the weekend," says Kit Juckes, chief FX strategist at Societe Generale.

"Substantial progress" has been made in the negotiations although it's widely reported that there are still differences over fisheries and on whether the EU's eagerly-awaited coronavirus recovery fund should also be subject to the same rules around 'state aid' that may otherwise have been agreed by London.

"The fact that the knotty UK fisheries issue has been declared the “last remaining hurdle” for a Brexit deal, leads some to believe that a deal has been struck on the state aid issue formerly thought to be the chief remaining hurdle for agreement," says John Hardy, head of FX strategy at Saxo Bank. 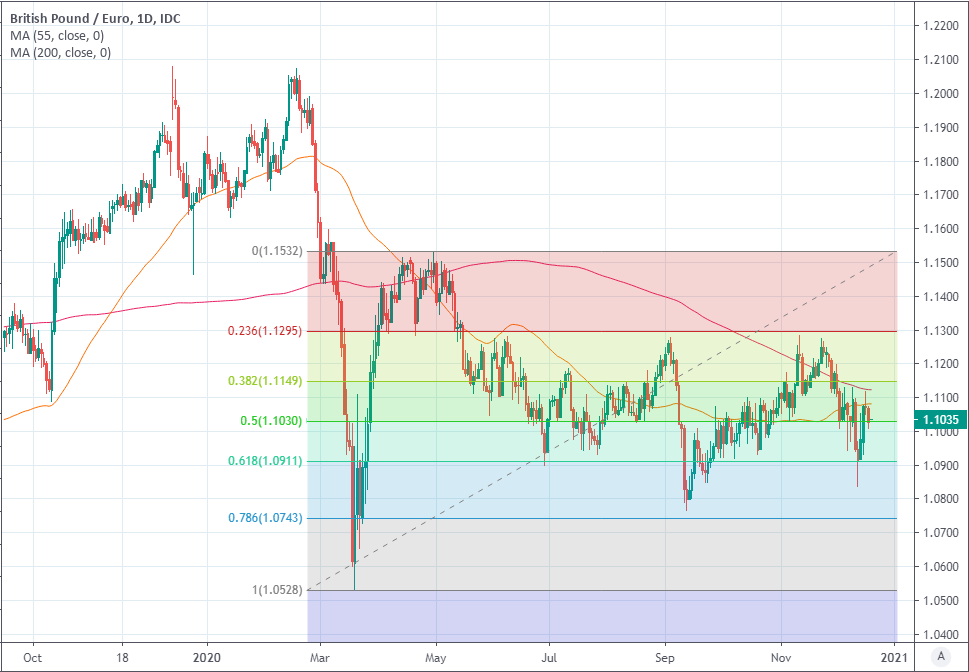 Above: Pound-to-Euro rate at daily intervals, with Fibonacci retracements of March recovery and key moving-averages.

Time is now running short on the negotiators, with less than a fortnight to go in which the two sides will be able to ratify any agreement and so the Pound could be vulnerable over the coming days.

"EUR/GBP revisited the 200 day moving average at .8988 above which it is expected to range trade in the days to come," says Axel Rudolph, a senior technical analyst at Commerzbank.

The Pound-to-Euro exchange rate was turned back from both its 200 and 55-day moving-averages last week and now enters the new week at 1.1038, although Commerzbank sees it on course for 1.0900 ahead of a further fall to 1.0726 over the coming weeks.

A fall to 1.0726 would take the Pound back to multi-month lows, a level that may have grown more likely in light of a weekend report from the BBC suggesting the government intends to make a decision on Christmas day as to if the discussions should continue beyond then.

"In our view, plenty of progress has been made already (with the issue of state aid seemingly resolved) and we expect the (rather political) issue of fisheries to be resolved as well. While the timing remains uncertain (we are inclined to expect a resolution over the weekend, but a further delay into next week cannot be ruled) the eventual agreement should provide a modest boost to GBP," says Petr Krpata, chief EMEA strategist for currencies and interest rates at ING. "We perceive the GBP reaction function to the UK-EU trade negotiation outcome as asymmetric, with modest upside in the case of a deal but profound downside in the event of no deal as fairly limited risk premium is currently priced into GBP...It is a very quiet week on the UK data front next week, with the Brexit negotiations remaining the overwhelming driver of the pound." 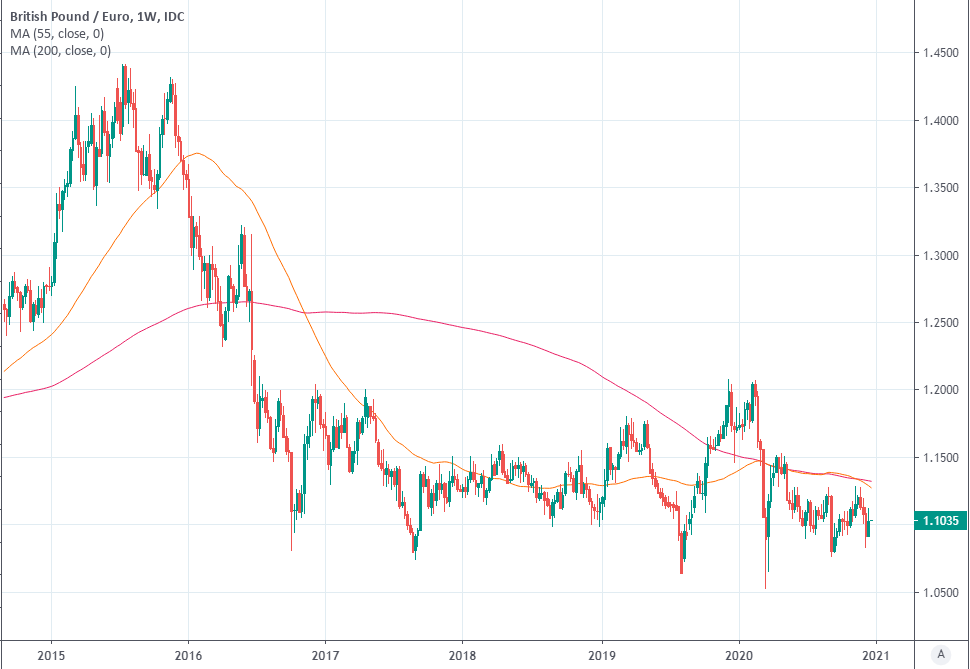 Above: Pound-to-Euro rate shown at weekly intervals with Fibonacci key 55 and 200-week moving-averages.