- GBP/EUR has room to rally after bottoming out on charts.
- Recapture of 1.1189 marks bottom, turns focus to 1.1281.
- In quiet week for data where bearish USD views dominate.

The Pound-to-Euro exchange rate has carved out a technical bottom on the charts and could now have scope to extend its run higher in the week ahead, potentially reaching four month highs in another quiet week for economic data although lingering Brexit risks still muddy the medium-term waters.

The Pound-to-Euro rate rose 1.07% in a week that was devoid of major economic data as well as developments in the Brexit process although crucially, it closed above 1.12 for the period having cleared a pocket of notable resistance levels that mean Sterling has now formed a technical bottom on the charts.

"A break below .8937/25 would still see a top established to warn of a more meaningful turn lower," says David Sneddon, head of technical analysis at Credit Suisse, referring to the EUR/GBP rate in a Friday note to clients.

Sneddon told clients Friday that a move above 1.1189 could give way to a more meaningful move higher that ultimately ses Sterling targeting 1.1224 and then 1.1279 over subsequent days, although he also said the Pound might struggle to overcome the latter on the first asking.

"A slide below the .8931 would target the June low at .8864," says Karen Jones, head of technical analysis for currencies, commodities and bonds at Commerzbank, also referring to EUR/GBP while tipping the Pound-to-Euro rate for a run at 1.1281 following any rise above 1.1196. 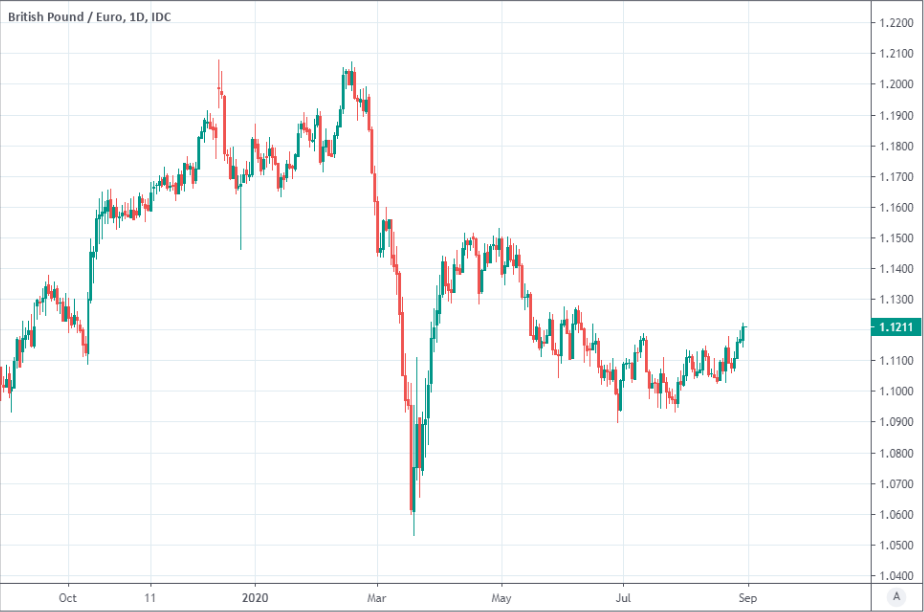 The Pound-to-Euro rate enters the new week trading just north of 1.12 but could face immediate pushback from the 50% Fibonacci retracement of its May fall, given that lesser Fibonacci retracements within the same series have previously stymied the exchange rate on the charts.

Commerzbank's Jones has advocated that clients buy the Pound-to-Euro rate if it happens to fall back toward 1.1074, although she retains a negative one-to-three month outlook for Sterling. She says there's scope for Sterling to fall back to 1.0743 in that time.

"Bank of England Governor Andrew Bailey said “we are not out of firepower by any means” when he spoke shortly after 9amET on day two of the Jackson Hole symposium, but he didn’t hint at any need for it right now and so we think this largely explains sterling’s out-performance vis a vis the euro since the NY open," says Eric Bregar, head of FX strategy at Exchange Bank of Canada.

The technical tables turned in favour of the Pound in a week where price action was dominated by central bankers.

Bank of England Governor Andrew Bailey said in an address to the Jackson Hole Symposium on Friday that the BoE still has plently of ammunition it can use in order to support the economy including negative interest rates. He also said the bank does not intend to raise interest rates until "clear evidence that significant progress is being made in eliminating spare capacity and achieving the 2% inflation target sustainably."

But despite the dovish BoE tone, investors were undeterred from Sterling, which benefited more than the Euro from an exodus out of the Dollar which was the main culprit behind the rising Pound-to-Euro rate. Chairman Jerome Powell's declaration that the Federal Reserve (Fed) will now covet above-target inflation pressures, while keeping interest rates pinned to the floor, was seen behind the Dollar fall that was felt by all exchange rates including GBP/EUR Friday. 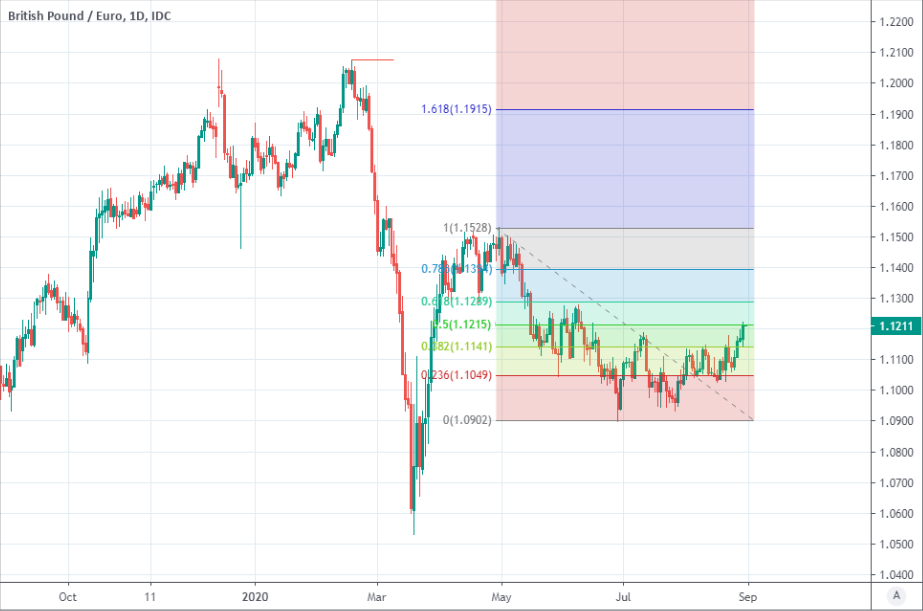 Above: Pound-to-Euro rate shown at daily intervals with Fibonacci retracements of May 2020 fall.

"It will be a quiet week on the UK-EU trade negotiations front, with the next round of negotiations only starting in the week after next (when the UK may put forward a paper on the state aid). We don’t expect any positive headline news from negotiations in weeks to come, suggesting little upside potential to GBP beyond the general USD weakness," says Petr Krpata, chief EMEA strategist for currencies and bonds at ING. "On the UK data front, the focus will be on Aug Manufacturing and Services PMIs (Tue and Thu respectively). We don’t expect much fireworks with both readings remaining fairly flat, suggesting the degree of USD softness will be the key driver of the cross."

The week ahead will see a handful of economic numbers released in the Eurozone but is again devoid of market moving data for Sterling, while the Brexit talks won't resume in earnest until the second week of September. Brexit negotiations remain deadlocked although The Express reported on Friday that Brussels' Michel Barnier has told European capitals they may need to revise the negotiating mandate given to him in order to make progress in the talks, indicating potential movement on the European side.

Tuesday's Eurozone inflation figures for August are the highlight of the European calendar followed by July retail sales at 10:00 on Thursday. Consensus is looking for Eurozone inflation to have risen at an annualised rate of 0.2% this month, down from 0.4% previously. Core inflation is seen rising by 0.9%, down from 1.2% previously. Meanwhile retail sales are expected to have risen 1.3% in July after gaining 5.7% in June.

"It also looks like Euro area inflation could surprise on the downside next week, which could dent the EUR," says Mikael Sarwe, head of strategy and research at Nordea Markets. "Given the ECB’s announced link between the PEPP programme and inflation, next week’s inflation numbers are important. We believe that the spike in clothing prices will reverse, with core inflation dropping markedly from 1.2% to 0.5% y/y and there is a clear risk of an even lower print before rebounding in September. The economist consensus is currently at 0.8% y/y for the August core, which seems way too high to us. Crazy volatility, but the net interpretation must be that there is no rest for the ECB yet and an increase of PEPP in December is on the cards." 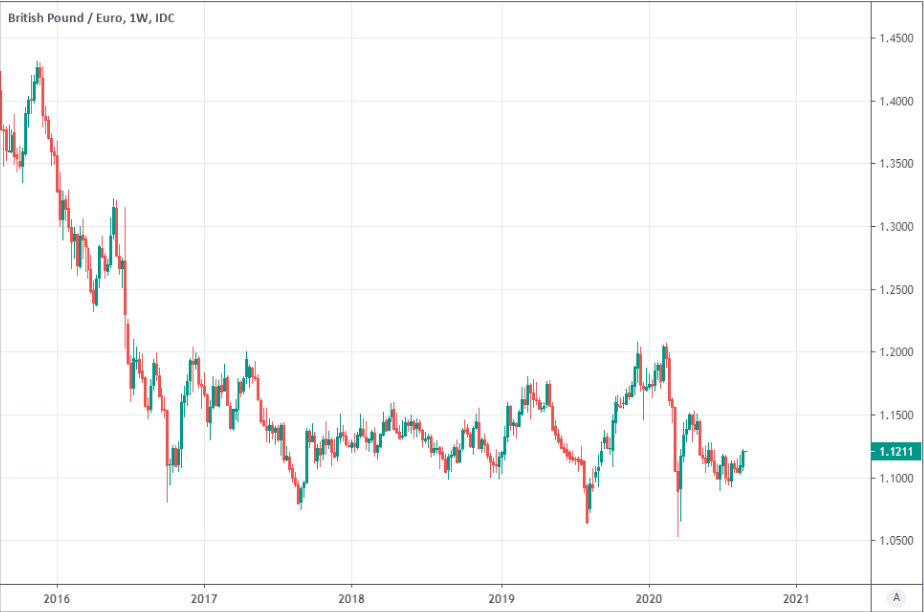 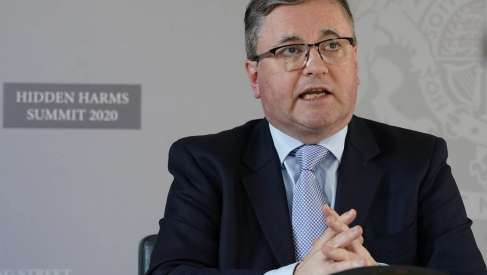