- GDP data set to reveal cost of coronavirus for economy.

The Pound-Euro rate is roadblocked on the charts and vulnerable to a correction over a multi-week horizon, technical analysts say, and this week will be guided by the market response to the government's lockdown exit plan and official data that's set to reveal the cost of the coronavirus for the economy last quarter.

Pound Sterling ended the week on its front foot against the Euro but it wasn't able to take back the 200-day moving-average at 1.1476 and has remained roadblocked by the 61.8% FIbonacci retracement of the 2020 downtrend around 1.1491 on the charts. The upward move was aided by weakness in the Euro.

Technical analysts at Commerzbank say the exchange rate is likely to range-trade around that 200-day average over the coming days but that it remains vulnerable to a downward correction on a multi-week horizon.

"EUR/GBP continues to trade sideways around the 200 day ma at .8721 and is to further range trade above the April low at .8671. While it holds we remain neutral, although we suspect that the market is trying to base," says Karen Jones, head of technical analysis for currencies, commodities and bonds at Commerzbank.

Jones says Sterling should find support around 1.1281 in the event of any weakness but that if this level gives way the Pound-Euro rate would then face further losses to 1.1118. She sold the Pound-Euro rate around 1.1432 last week in anticipation of a move down to 1.0020 over the coming weeks, the financial crisis low, after weeks of bearish price action on the charts. However, she also says a move above 1.1519 would negate this forecast. 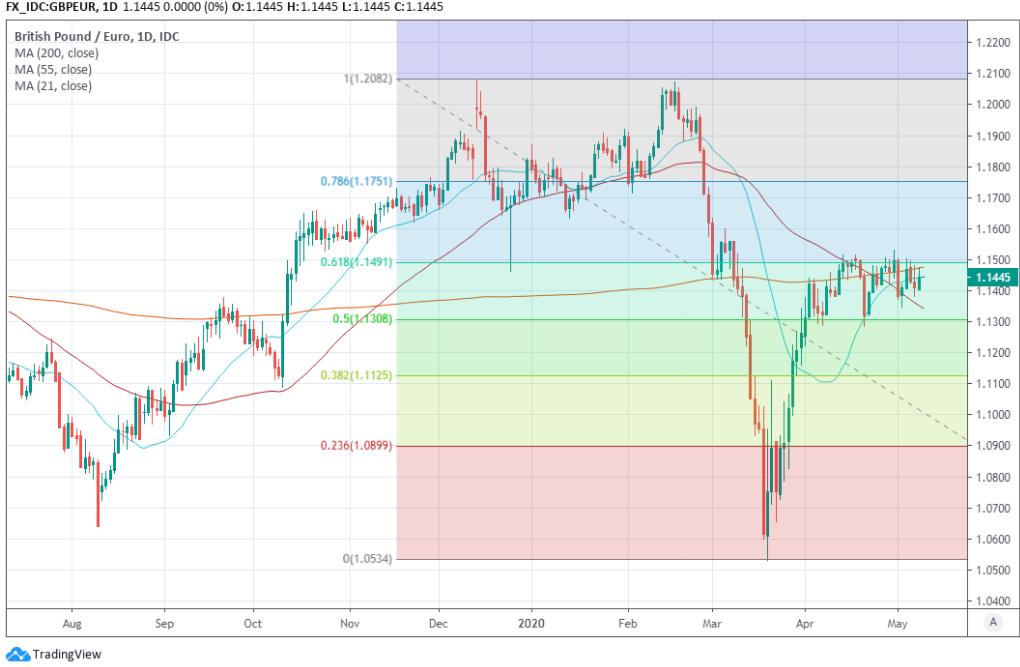 Above: Pound-Euro rate shown at daily intervals. Trapped below 61.8% Fibonacci retracement of 2020 downtrend.

The Pound has been roadblocked by the 1.1491 for weeks so the path of least resistance might be to the downside in the coming days. Sterling enters the week with upbeat investor sentiment having survived a record non-farm payrolls job loss in the U.S. on Friday, which helped lift the risk-sensitive British currency Friday although this week investors will be responding to Prime Minister Boris Johnson's lockdown exit plan that's due to be announced Sunday.

The PM is widely expected to extend the 'lockdown' into June although speculation has it that some restrictions could be eased this week. The UK is the last developed world country to set out a plan for a partial easing of restrictions on daily life and the danger is that investors perceive this week's move to reopen the economy as being too slow, which might see Sterling suffer as a result. Markets will want to see a clear roadmap toward a full lockdown exit.

"Like the eurozone and the US which have already reported figures for the first quarter, the UK's GDP numbers next week will only give us an initial sense of the damage. We expect a slip of around 2% in GDP, given lockdowns began very late in the quarter. Clearly the full damage, incorporating the second quarter, will be much worse. We expect the UK economy to be around 15% smaller by the middle of the year, but more importantly, the recovery will be slow," says James Smith, an economist at ING. "We don't anticipate the size of the economy returning to pre-virus levels until 2022 at the earliest."

The lockdown plan will come days ahead of Wednesday's first-quarter GDP figures, which are due out at 07:00 and are expected to show the economy contracting by -2.5%. The size of the fall anticipated by the consensus is modest in comparison to what's expected for the second quarter although this is only because the 'lockdown' wasn't put into place until the final week of March. German GDP data will also be released on Friday at 07:00 and is expected to show the Eurozone's largest economy contracting by -2.3%.

Wednesday's GDP data will provide a glimpse of the damage done to the economy although investors might care more about the lockdown exit plan and how soon it permits everyday life to return to some semblance of normality, because reopening is key to limiting the damage. Investor hopes of a swift global reopening have reflated stock markets after their March collapse, and lifted Sterling in the process. Sentiment in equity markets will also be an important influence on the Pound this week. 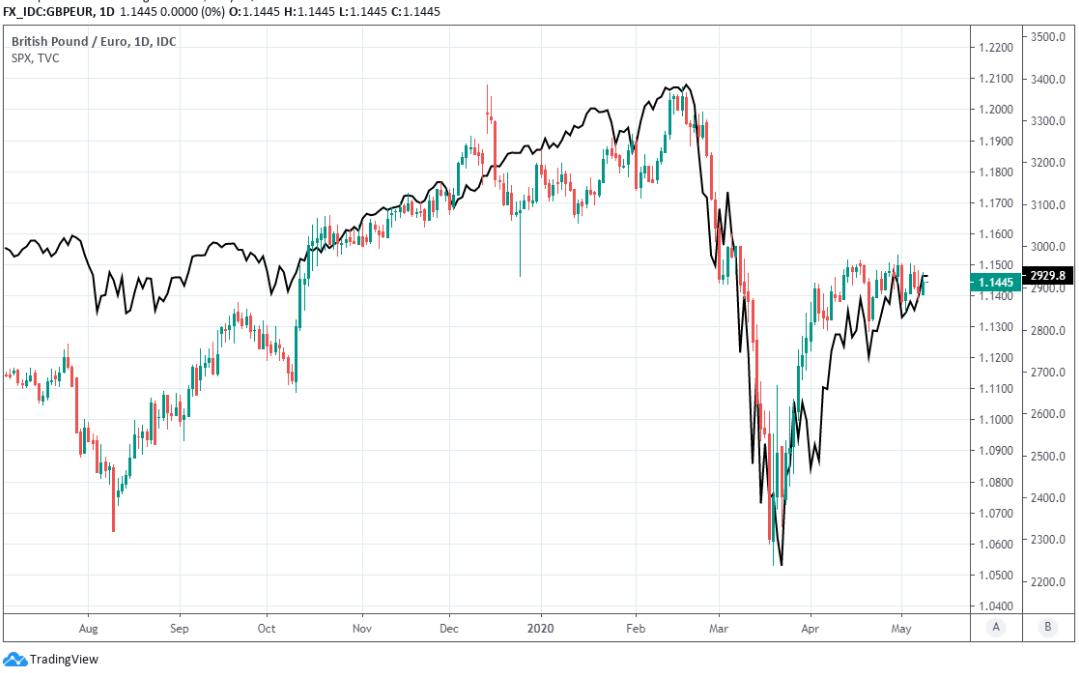 "Long EUR/GBP or short GBP/USD worth considering: The BoE may not have thrown us any surprises today, but the pace of its QE operations is impressive and now has overtaken the Fed and the ECB in terms of % of GDP. As a result, UK real yields continue to decline and with it suggest GBP weakness versus both EUR and USD to come," says Jordan Rochester, a strategist at Nomura.

The Bank of England said Thursday the economy would likely shrink by -3% for the first quarter and -25% for the second quarter, leading Britain to a -14% fall in GDP for 2020 and its worst year since before the 1706 Act of Union that joined England and Wales with Scotland. However, this is expected to give way to a rebound of up to 15% the next year in 2021. The numbers aren't forecasts but are intended to highlight one scenario the bank considers to be likely.

This was before Governor Andrew Bailey hinted in a press conference that the bank could increase the size of its quantitative easing programme in June. This is a further headwind for British bond yields that would crush the returns of foreign investors in the developed world's largest current account deficit unless accompanied by a weaker currency. Strategists at Nomura and Rabobank expect the BoE's interventions in the bond market to weigh on Sterling over the coming weeks and months, although others see the Brexit process being a heavier weight for the British currency.

"Recent comments from ministers have been unambiguous – the UK will not request an extension and if offered one, it will not accept it. If the UK continues to pursue this line, as seems likely, concern is likely to grow that a simple lack of time to negotiate a comprehensive deal raises the risk of the UK trading on WTO terms from January, or agreeing to a deal on unfavourable terms. This is a growing downside risk for GBP in the near-term and our forecasts have EUR/GBP rising to 0.90 by the end of the current quarter," says Adam Cole, chief FX strategist at RBC Capital Markets.

European Trade Commissioner Phil Hogan told RTE last week that he believes UK negotiators have little intention of striking a Brexit trade deal and every intention of blaming the coronavirus for any damage caused to the economy should an 'Australia deal' Brexit, the same as a 'no deal Brexit', play out at year-end.

The Brexit talks are barely three rounds in and have stalled after opening gambits saw Brussels play immediately for an extension of the 'transition period' while Westminster insisted the whole thing be an affair between two sovereign equals. The British refused the extension and the Europeans scoffed at London's own take on a 'level playing field,' while both had less than eight weeks on Friday to extend an end-June deadline for requesting a transition extension or face seeing markets grow concerned about the prospect of something like an 'Australia deal Brexit' playing out at year-end. 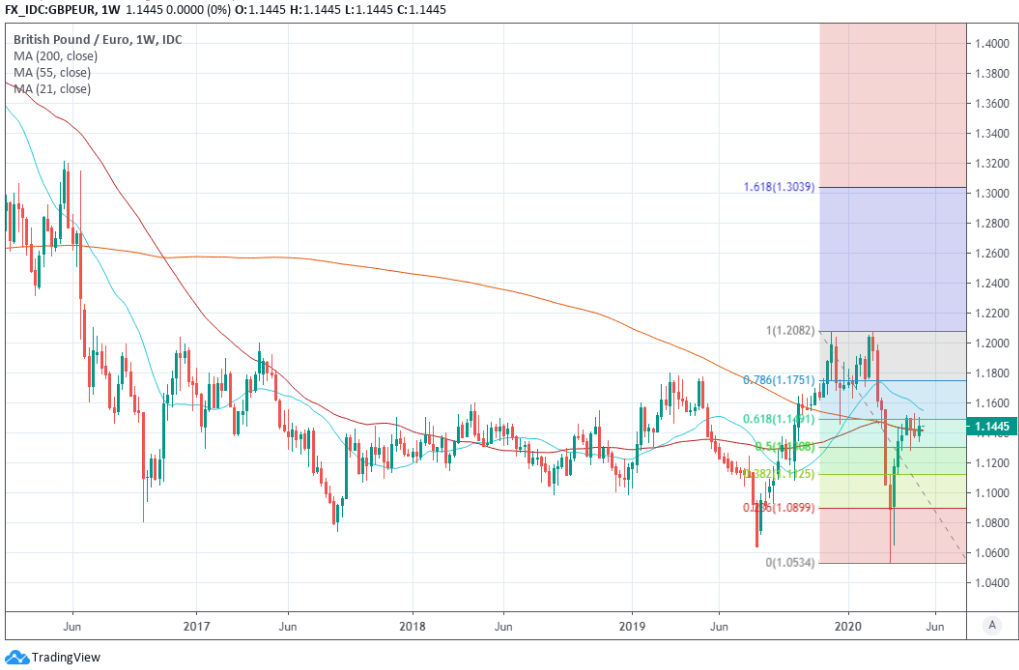 Above: Pound-Euro rate shown at weekly intervals. Trapped below 61.8% Fibonacci retracement of 2020 downtrend.