The Bank of England have said the UK economy is likely to contract by 25% quarter-on-quarter in the April-June period, but a sharp recovery should transpire once covid-19 restrictions are lifted.

However, the scale and shape of the recovery remains highly uncertain and it will take many months before economic losses are fully recovered as lower confidence and higher uncertainty are expected to persist for some time and dampen spending and investment.

The Bank on Thursday issued its latest set of economic forecasts said there would be a cautious return to normal for the economy as consumers are likely to maintain some social distancing voluntarily, even after official measures are eased.

"That is consistent with early evidence from countries in which there have been fewer enforced measures and those in which the relaxation of measures is already under way. In the scenario, voluntary social distancing is assumed to unwind only gradually over the next year," said the Bank in its May Monetary Policy Report.

The Bank said there is strong evidence of a deep and unprecedented economic slump underway, with payments data pointing to a reduction in the level of household consumption of around 30%. 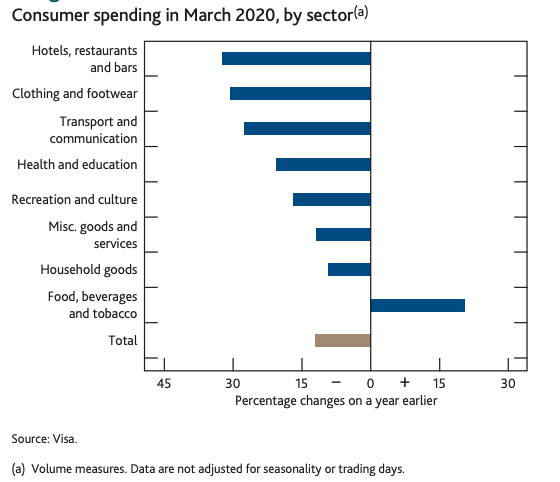 According to the Bank’s Decision Maker Panel, companies’ sales are expected to be around 45% lower than normal in 2020 Q2 and business investment 50% lower.

While inflation declined to 1.5% in March the Bank forecasts the rate to fall below 1% in the next few months, in large part reflecting developments in energy prices.

How the economy evolves from here is highly uncertain and therefore difficult to predict, as the Bank's economists cannot foresee government policy on lifting lockdown measures, nor can they predict how consumers will behave. 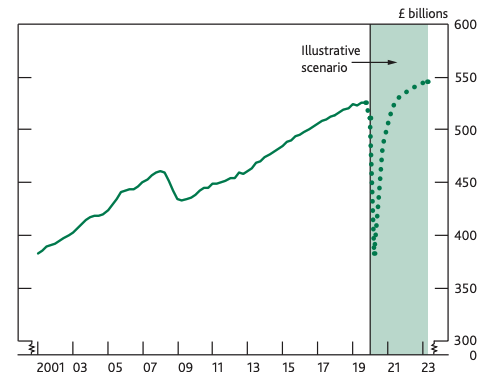 Therefore, the Bank has devised a base-case scenario for the outlook, but there are some variables in the assumptions that ensure this is by no means a guaranteed outcome.

"The latest MPC economic scenario suggests UK economy will see biggest fall in annual GDP this year since 1706 followed by the strongest growth since 1704 in 2021. Both these previous records were established during the War of Spanish Succession (1701-14)," says Andrew Sentance, Senior Adviser to Cambridge Econometrics and a former member of the Bank's Monetary Policy Committee. 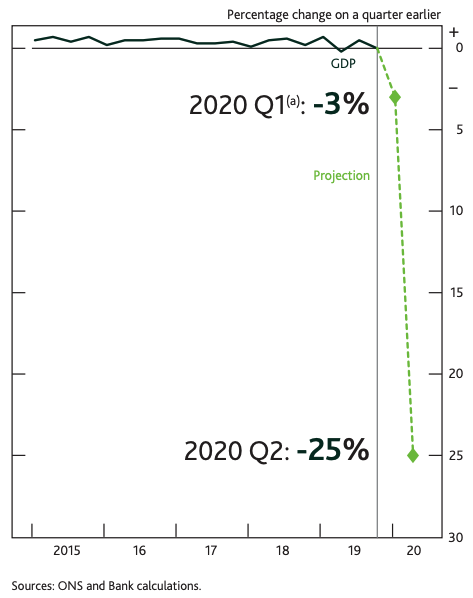 Inflation is forecast to fall rapidly over coming weeks and months as lower global oil prices feed into lower domestic prices. The price of oil in April fell briefly to its lowest level since 2002 as a result of the substantial contraction in global economic activity.

UK fuel prices are expected to decline markedly as a result and the Bank forecasts inflation to fall below 1% over the coming months. 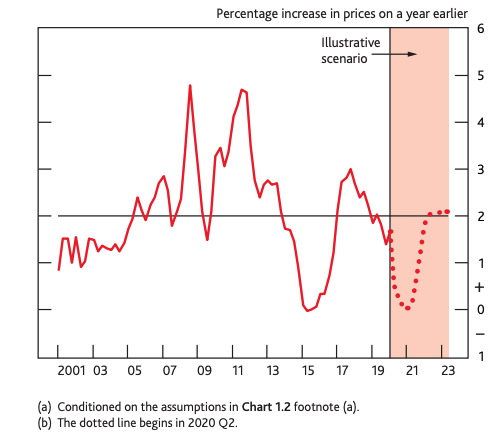 Economists at the Bank meanwhile estimate that UK‑weighted world GDP declined by around 4% in Q1 and could fall by over 20% in Q2. World trade has also declined significantly, and is expected to contract by around twice as much as global GDP in 2020. 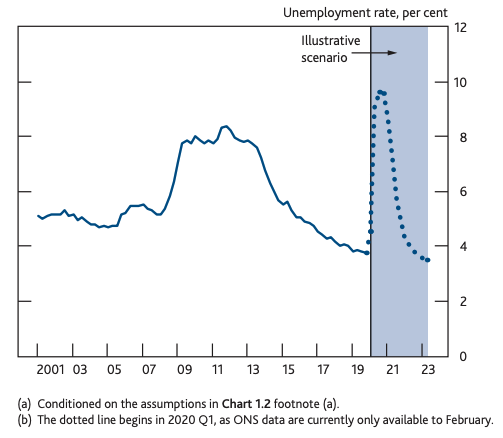 While the outlook remains uncertain, the Bank credits itself with helping the economy to avoid an even deeper contraction.

"The loosening of monetary policy announced by the MPC over the past few months will support spending," said the Bank.

The Bank also says numerous government support packages, including support for businesses and employees, extra spending on the NHS, and higher government investment spending, will help minimise the economic damage posted by the covid-19 lockdown. 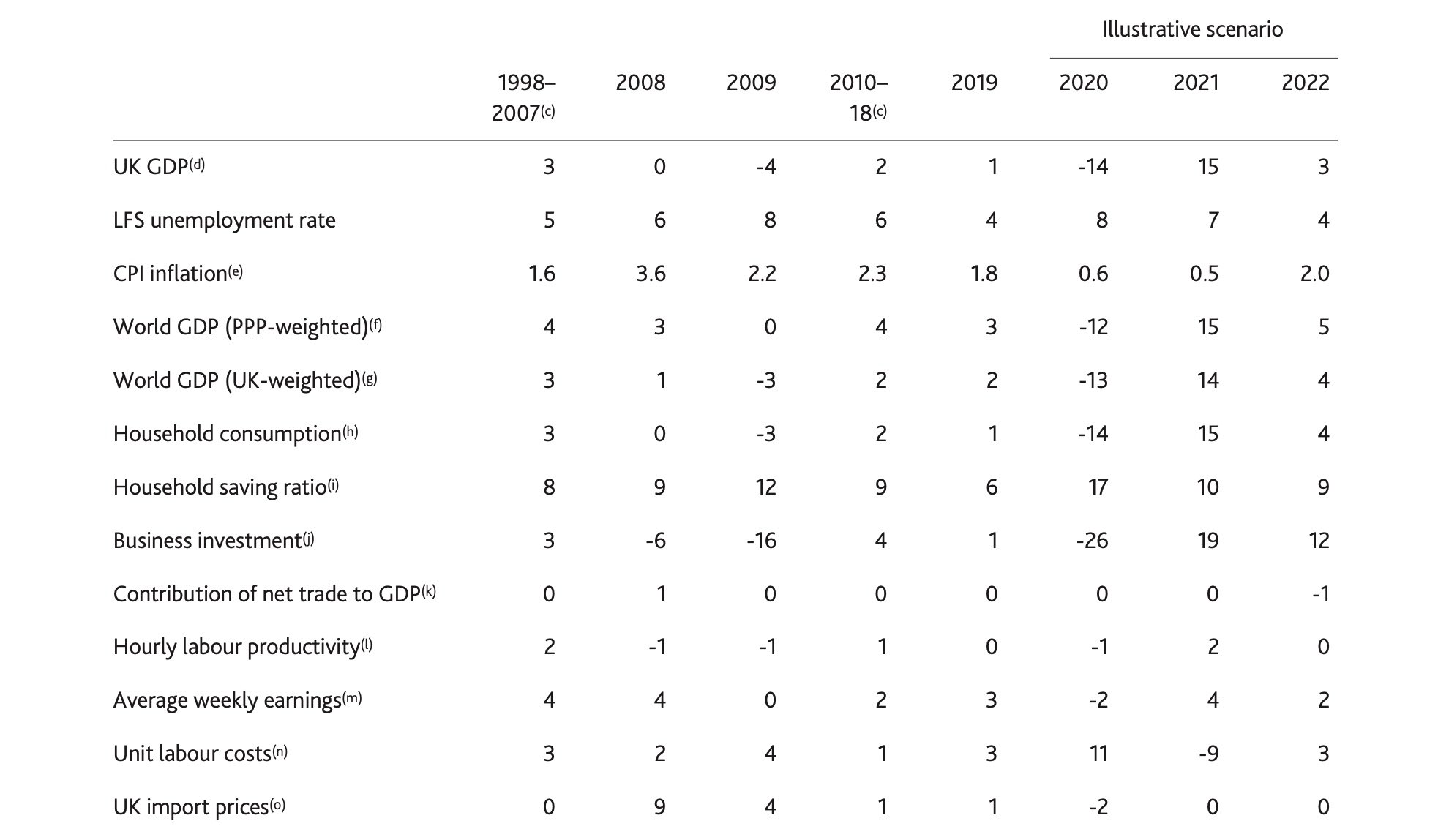 Above: The BoE's full suite of forecasts.