Pound Sterling has appreciated in value by 3.0% on March 19 following a decision by the Bank of England to cut interest rates and significantly boost its quantitative easing programme while similar moves by the European Central Bank appear to have put a lid on Euro strength.

The Pound has gone higher against the Euro, Dollar, Franc, Yen and a host of other currencies as markets judge that the Bank's latest move to shore up the UK economy is a credible one.

The Bank of England cut interest rates to 0.1% and increased its government and corporate bond holdings by £200BN in an unanimous decision aimed at staving off the negative effects of the coronavirus pandemic.

Make no mistake, this is a sizeable injection for the UK financial system and economy.

"In light of actions to tackle the spread of the virus, and evidence relating to the global and domestic economy and financial markets, the Monetary Policy Committee (MPC) held an additional special meeting on 19 March. Over recent days, and in common with a number of other advanced economy bond markets, conditions in the UK gilt market have deteriorated as investors have sought shorter-dated instruments that are closer substitutes for highly liquid central bank reserves. As a consequence, UK and global financial conditions have tightened," said the Bank in a statement detailing the decision.

The world of foreign exchange can certainly be confusing: typically one would expect the Pound to plummet after such an action, after all the standard response of a currency to interest rate cuts and fresh quantitative easing is to fall.

But these are certainly uncertain times and there could be up to four issues at play that explain why Sterling is finding support against the single currency:

1) The market has been expecting this move. Often when an event is so well signposted the market's reaction is to 'sell the rumour, buy the fact'. Indeed, we wrote on Tuesday that it was rising expectations for Bank action that was potentially contributing to Sterling's deep sell-off

2) The market judges the Bank's actions to have been credible. If the Bank and Treasury's combined efforts to dampen the downside effect of the coronavirus outbreak ultimately proves to be effective, then the UK economy could outperform its rivals going forward. Relative economic outperformance tends to underpin a currency. 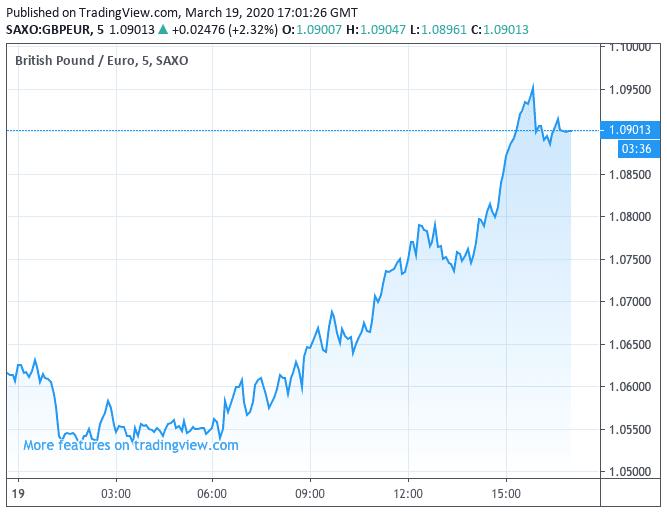 3) The Bank has run out of ammunition. Because interest rates are at 0.1% further cuts are now highly unlikely simply as they will achieve very little. The same could be said for further quantitative easing measures. Therefore, it could be reckoned that the Bank has spent its ammunition, thereby denying a driver of further GBP downside.

"Go big or go home from Bank of England. 15bps cut & £200bn QE (mainly govt bonds). Big purchases. BoE previously saw QE as a credit-easing measure too at times of market stress. So makes sense. BoE have now laid their cards on the table. Not a lot left in the monetary tank," says Viraj Patel, FX and Macro Strategist at Arkera.

4) The market's response to the coronavirus episode is shifting. If we look at the markets we can see the AUD and NZD are bouncing, these two currencies have lost significant ground since the coronavirus outbreak and it appears that the deluge of money offered by global central banks could now be providing a backstop to 'risk on' currencies. Crucially the Pound fits this bracket, therefore it could be that the broader market place is moving in Sterling's favour.

David Bloom, Head of Global FX Strategy at HSBC says we are currently in a binary 'Risk on Risk Off' market and a currency's position in that spectrum determines its performance.

"So the most Risk On currencies are currently NOK, AUD, GBP and NZD in that order," says Bloom.

That all these currencies are moving higher confirms markets are turning more 'risk on', indeed a look at the major indices at the time of writing shows a rebound in global stock markets is underway.

Make no mistake, the MPC's £200B QE announcement is huge. £75B is the most announced at a previous meeting.

Back in January, Gov Carney argued £120B would be equivalent to cutting Bank Rate by 100bp, so in theory, today's QE announcement is like cutting rates by 167bp pic.twitter.com/12lvQnd6on

The Euro has fallen across the board on Thursday in what appears to be a reaction to the announcement of a sizeable quantitative easing programme by European Central Bank (ECB), which is aimed at stabilising the Eurosystem as it deals with the fallout from the coronavirus pandemic.

With European countries in effective lockdown and infection rates still rising markets demanded credible and decisive action from the central bank which had been accused of a wrong-footed approach to the crisis that will almost certainly result in a deep recession. The ECB convened a special meeting on Wednesday night that saw the Governing Council agree to make €750BN available to the Eurozone via the purchase of public and private securities.

The Euro has fallen by over a percent against the Dollar, Pound and Dollar-bloc currencies in the hours following the announcement, as markets judge this to be a sizeable package that will indeed have an impact.

To some readers it would therefore seem ironic that the Euro is actually under-performing its rivals in reaction to the ECB's seemingly competent actions.

But, the textbook states that the Euro tends to benefit when global stock markets are falling in the current environment, therefore stock market stability will work against the currency. Furthermore, the textbook also suggests that currencies fall when their issuing central bank engages in quantitative easing, particularly when the timing and scale of the easing is unexpected. This is certainly the case with the ECB's latest actions.

"We have been very critical of the ECB in the past few weeks, primarily because we consider the message that monetary policy is close to its limits, with the inference that fiscal policy has to step in, as a very dangerous signal to send to markets, especially in this environment. We are happy to eat our words today, at least based on the scope and size of this package, and, just as importantly, the manner in which it is communicated to markets. The ECB has it’s mojo back, and that’s a good thing!" says Claus Vistesen, Chief Eurozone Economist at Pantheon Macroeconomics.

The ECB governing council convened an emergency meeting on Wednesday night and launched the Pandemic Emergency Purchase Programme (PEPP, which is expected to run until the end of the year, and include all assets currently eligible in the existing quantitative easing programme.

Calculations by Pantheon Macroeconomics show the ECB will now be buying a total of just over €115B per month in the next nine months, "which is a significant lift," says Vistesen.