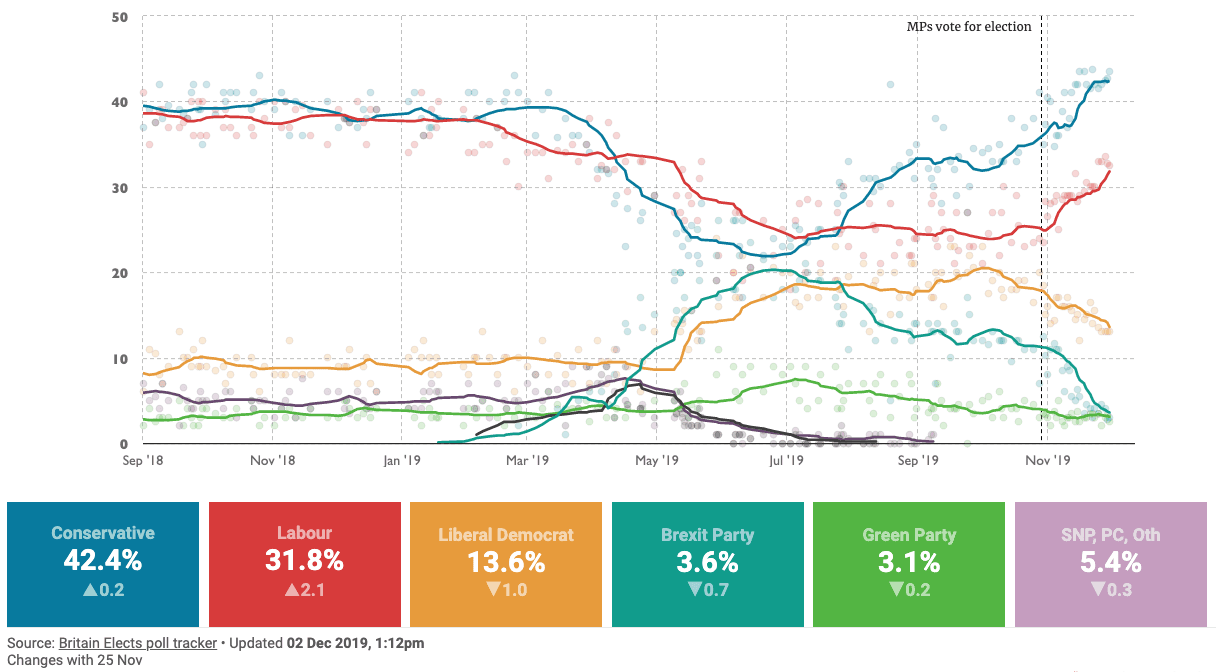 Above image courtesy of Britain Elects.

- Risks for Sterling are to the downside

The Pound-to-Euro exchange rate is trading at 1.1686 on Tuesday, December 03. and we are told by one analyst the balance of risks for Pound Sterling are balanced to the downside at this juncture.

The Pound came under pressure on Monday, with foreign exchange markets engaging in widespread selling of the currency amidst falling odds of a Conservative majority being achieved at the December 12. General Election.

The implied odds of a Conservative majority slipped below 65% on the Betfair Exchange over the course of the past 24 hours, having been as high as 70% just last week, amidst a trend of increasing support for the opposition Labour Party in the polls.

GBP/EUR was quoted as high as 1.1765 when the odds were towards 70%, but the exchange rate has now fallen below the 1.17 level and is quoted at 1.1686 at the time of writing on Tuesday when the odds of a Conservative majority stand at 64%.

A hung parliament, "would certainly result in further frustration at the continued stalemate in passing a Withdrawal Agreement," says Chris Towner, Director at JCRA, a financial risk management firm.

Sterling is forecast to fall a few percent in a hung parliament scenario by JCRA, with GBP/USD seen going back towards 1.2500 and GBP/EUR towards 1.13-1.14.

The Pound registered a 0.5% decline against the Euro at the start of new week "on the back of poor market sentiment," says Mikael Olai Milhøj, Senior Analyst with Danske Bank, "Sterling continues to be drifting." 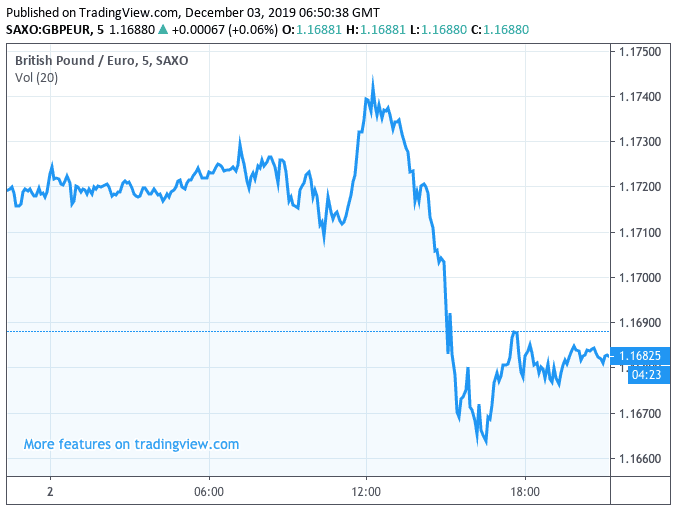 Further gains in the Pound "would need to be on the back of rising (expected) growth rates ahead, but data and continued political risk do not support such a case," adds Milhøj, who says the risks for Sterling against the Euro are now titled to the downside.

We expect the Pound will remain highly sensitive to trends in the polls, and with just ten days to go until the election, Prime Minister Boris Johnson will become increasingly concerned that a majority will be unachievable.

As such, Labour are closing the gap on the Conservatives, and a hung parliament - where no single party holds a majority - will become likely if the gap between the top two parties is smaller than 7%.

The New Statesmen's Britain Elects poll tracker - which combines all the polls to give an accurate overview - shows the Conservatives are on 42.4% while Labour are now on 31.8%.

"After weeks of what looked like noise within the margin of error – thanks in part to the fact that very few pollsters are now doing polls more than once in week, which makes it difficult to draw out trends – we can now say with certainty that Labour are gaining ground in the polls. They are not doing so at the rate they did at the last election yet, and the Conservative remain ahead in the polls, but there is a clear trend: of Labour gaining ground thanks to defections from the Liberal Democrats and Greens," says Stephen Bush, Political Editor at The New Statesman.

While the gap between the two leading parties is now 10 points, it cannot be emphasised enough that what matters is the trend of increasing vote share by Labour which suggests that by the time the country goes to vote the gap will be in hung parliament territory.

“The overwhelming majority of polls tracking the UK election clearly suggest growing support for Labour," says Nigel Green, the founder and chief executive of deVere Group. “The surge for Labour in the recent polls, which raises the spectre of another hung parliament, has been reflected by the dip in the Pound against the Dollar, the Euro and other major currencies."

"If Conservatives win the general election, a clearer Brexit path will be paved," say Citibank in a briefing to clients of their Wealth Management unit. "If the general election result in hung parliament, nothing is resolved and Brexit remains in limbo."

For now economists at Citi are expecting Johnson's Conservative Party to edge cross the line with a majority, and this is why their economists project a stronger Pound over coming months.

However, the above forecasts could well change, depending on the outcome of the looming election.

According to Citi, a Labour majority "contains downside risk for GBP as Labour’s business unfriendly policies could see a sudden stop of capital into the UK."

A hung parliament meanwhile sends the UK "back to square one, nothing is resolved and Brexit remains in limbo," say Citibank. GBP/USD is forecast to slip back into a 1.22-24 range under such an outcome.

According to deVere's Green,  the Pound will fall to 1.20 against the U.S. Dollar if the UK election delivers a hung parliament.

“I think we can expect the pound to fall to $1.20 in the event of another hung parliament," says Greene. “Should a Conservative majority be delivered, I believe the pound will reach $1.35."

Greene says a hung parliament is likely to lead to another EU referendum and another Scottish independence referendum.

“This would intensify uncertainty perhaps into 2021. Uncertainty is something financial markets loathe and this is why the pound has dipped on the news of Labour closing in on the Conservatives ahead of this crucial Brexit election," adds Greene.