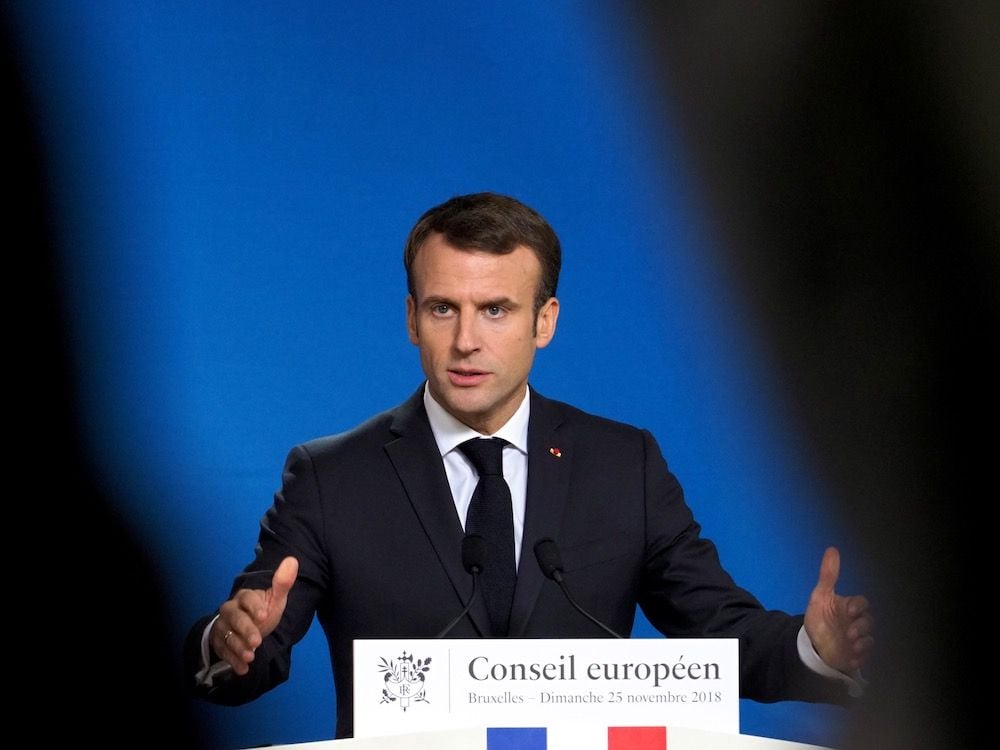 - Merkel said to want a delay to January 31

- But, also raises prospect of Brexit deal finally being passed

The Pound was seen softer as it entered a consolidative mode against the Euro, Dollar and other major currencies on Thursday, as markets awaited a decision by the European Union to extend the Brexit deadline.

It is reported that France's President Emmanuel Macron is looking to extend the Brexit deadline to November 15, thereby rejecting the request from the UK Parliament for a deadline to be extended to January 31.

The Telegraph newspaper reports Macron is set to force an emergency EU summit by insisting that any delay to the October 31 Brexit deadline can last no longer than 15 days.

"The French President’s hardline stance, designed to exert maximum pressure on MPs in London to back the deal, has horrified diplomats in Brussels," says James Crisp, Brussels Correspondent at The Telegraph.

If confirmed, Macron's stance could see expectations of a 'no deal' Brexit rise once again, as markets have largely priced such an outcome out of Sterling.

The Pound has been rising steadily since August as odds of a 'no deal' Brexit decreased, firstly as Parliament legislated to force a Brexit delay, and secondly after Prime Minister Johnson secured a revised Brexit deal with the EU.

However, the pause button has since been hit on the Pound's recovery as the inability by Parliament to pass the Brexit deal leaves market participants facing fresh uncertainty and the prospect of another lengthy delay that leaves the people, businesses and financial markets of the UK in a state of limbo. 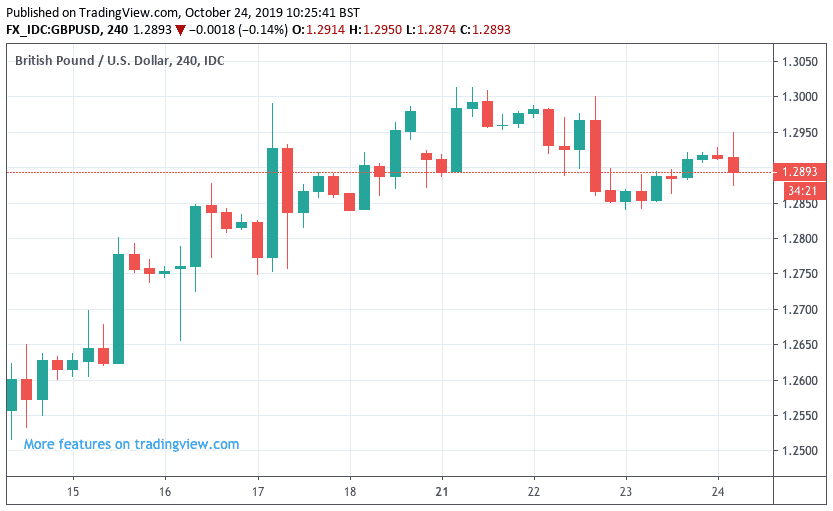 Above: GBP/USD at four-hour intervals

"Prices are developing a broader consolidation under ~1.30 while we await the next Brexit steps. Intra-day studies are now fully unwound from overbought. Near-term support is still seen in the 1.2800-1.2750 region. While over that area we view the pullbacks as corrective for further gains towards the 1.3400 range highs," says Robin Wilkin, a foreign exchange strategist with Lloyds Bank. 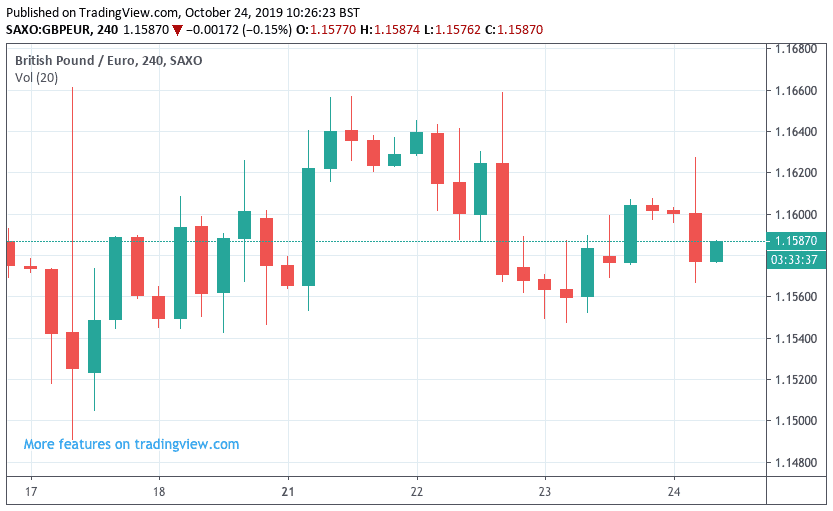 Above: GBP/EUR at four-hour intervals

Regarding the Pound-to-Euro exchange rate, Wilkin says prices are still consolidating under 1.1630, adding that a decline through 1.1534-1.1488 support would suggest a broader decline is in play.

When Shorter is Better

If the EU offers the UK a short extension it will be with the express aim of forcing Parliament's hand into voting for a Brexit deal, therefore Macron's stance would surely be welcomed by Prime Minister Boris Johnson who believes 'remainer' MPs simply won't vote for his deal unless the threat of a 'no deal' exists.

We must consider that the British Pound might actually prefer a short delay, as it means the prospect of a Brexit deal being passed is more likely. The passing of a Brexit deal is considered to be a best-case outcome for Sterling under the current circumstances, as it would kill off months of uncertainty and potentially unlock delayed investment in the economy.

However, it is widely reported that European Council President Donald Tusk is in favour of a longer extension lasting until January 31, a position agreed by Dublin and Berlin.

So @EmmanuelMacron set to force an emergency EU summit by insisting that any delay to the October 31 Brexit deadline can last no longer than 15 days. @JamesCrisp6 https://t.co/jB12fbWkfr

A Brexit extension does however require the unanimity of all of the EU's 27 leaders, hence a final decision could take some time to achieve and could result in the Pound trading around current levels over coming days.

The decision by the EU will ultimately determine the next steps in the Brexit progress. We get the sense Downing Street will double down on efforts to pass the Brexit deal if a short delay is offered, while a longer delay could raise the incentive to pursue a General Election.

On Tuesday Johnson put his attempt to pass Brexit legislation on ice after MPs rejected the timetable he was proposing that aimed to have the deal debated and passed by the House of Commons by Thursday to ensure a Brexit before October 31.

The votes "blocked the Sterling rally of the previous days. The risk of a disorderly Brexit still looks more or less excluded, but markets are pondering the consequences of a scenario of new elections after parliament rejected PM’s Brexit timetable. Still, the Sterling correction remains very modest," says Mathias Van der Jeugt, an analyst at KBC Markets in Brussels.

Johnson warned MPs voting against the timetable meant the country would have to go back to the polls to resolve the impasse.

According to the odds market at Betfair, the implied probability of a General Election being held in 2019 has risen to 50% in the wake of Johnson's comments, from 35% on Tuesday. However, the window for a December vote is fast closing, making a January election increasingly likely.

Neil Jones, Head of FX Sales, Financial Institutions, at Mizuho Bank in London says he sees an election coming, and that under a worst case scenario a Brexit extension lasts up to January 31. However, the outcome of the election is expected to "generate Sterling demand," says Jones, and this "all favours higher, longer-term Sterling into 2020."

However, according to research from Pantheon Macroeconomics, an election and its outcome might not be supportive of Sterling.

The independent economics reserach company say the Conservatives are expected to bleed support to the Brexit party once the October 31 deadline has been missed, while Labour should rally when people currently saying they don’t know how they will vote make up their minds; most of them voted Labour in 2017.

"Our base case remains that the election leads to another hung parliament, with a Tory minority government still paralysed on Brexit and forced into further delays," says Samuel Tombs, UK Economist with Pantheon Macroeconomics, adding:

"We expect an imminent general election, which will bring more near-term uncertainty and depress Sterling.