- Traders betting on a stronger Euro forced into retreat

The Pound-to-Euro exchange rate broke above the 200-day moving average (MA) at 1.1320 over the course of the past 24 hours, delivering a potentially significant technical shift in the market.

According to one FX market professional, this has "sent alarm bells ringing" for traders looking to bet on the Euro against Sterling.

Peter Stoneham, an options analyst on Thomson Reuters' currency desk had been 'bearish' on Sterling, but the break above the key 200 day moving average suggests the pair may actually extend higher.

200 day moving averages are significant 'lines in the sand' for technical traders as they often tend to rebuff a financial trend, or if they are overcome the exit velocity on the other side of the barrier can be significant.

This is because market participants tend to layer market orders around perceived technical levels, suggesting they are more a function of self-reinforcing market psychology than anything. 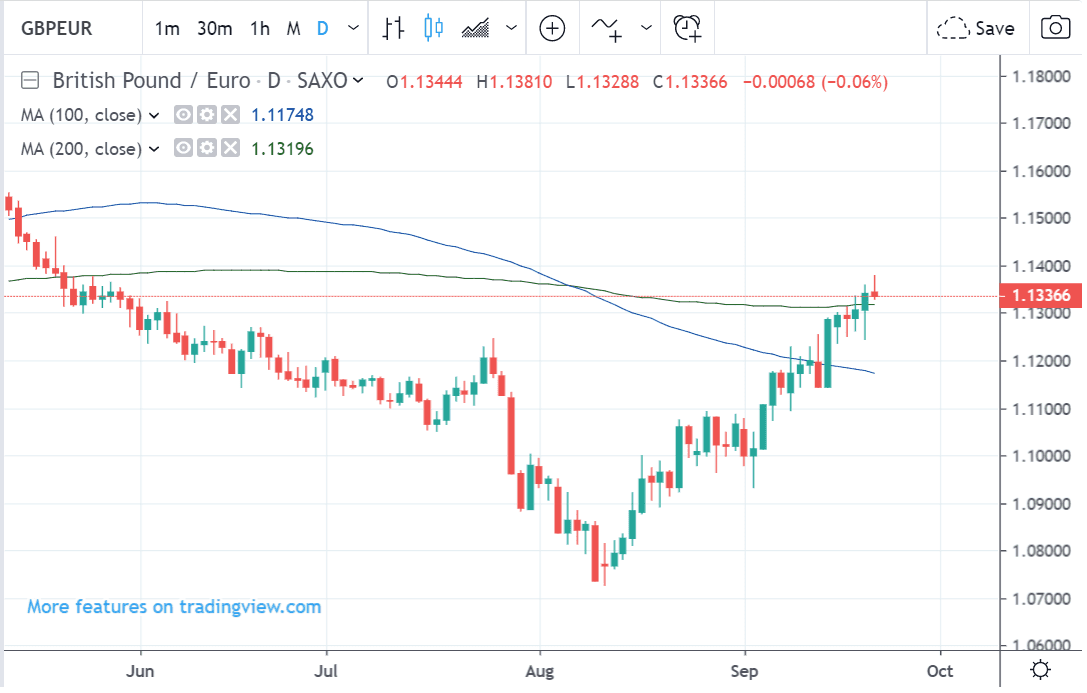 Alternatively, it would require a break back below the 10-day MA at 1.1257 to reinvigorate the bearish case, says Stoneham.

The Pound’s rise has been given momentum by what is known as ‘short-covering’ or ‘short-squeeze’ which is when traders start to panic and close bearish bets when they realise they were probably wrong about the market (Sterling) going lower, according to Richard Pace, another analyst at Thomson Reuters.

The break above the Pound’s 100-day MA at 1.1190 after the Brexit “mood music” from Brussels improved, set off the ‘short-squeeze’ in the Pound.

Irish Foreign Minister Simon Coveney today told the BBC that sentiment on current Brexit negotiations had improved of late, reinforcing expectations for a Brexit deal to be struck at the last minute: "I think the mood music has improved. "We all want a deal, we all know that a no-deal will be a lose, lose, lose for everybody, but particularly for Ireland and Britain."

In the options market, traders are now panic-buying call options to take advantage of the possibility the Pound could continue to rise as the Brexit deadline approaches.

“Many are positioned for a lower Pound,” says Pace, “so these trades hedge upside risk.”

Sterling rose sharply late on Thursday after Jean Claude Juncker, the President of the European Commission, appeared optimistic about the possibility of doing a deal with the UK when interviewed on Thursday.

"I think we can have a deal,” Juncker said in an interview with Sky News. “I am doing everything to have a deal because I don't like the idea of a no-deal because I think this would have catastrophic consequences for at least one year.”

Junckers comments contrast with those he told MEPs on Wednesday when he said that "the risk of a no-deal is very real", helping depress GBP/USD to an intra-day low of 1.2439.