- Pound to be moved by GDP data; Euro by German Factory Orders

The Pound-to-Euro exchange rate is quoted at 1.0915 at the time of writing on Monday, having experienced a fall of 1.65% in the week before, and studies of the charts suggest the pair will probably go lower in the coming days as the dominant downtrend extends.

Giving an indication of the strength of the trend, it can be noted Sterling has fallen against the Euro for 13 successive weeks now.

The 4-hour chart - used to determine the short-term outlook, which means the coming week or next 5 days - shows how the pair has broken below a major floor at the 1.1000 multi-year lows. This is a significant break which could open the way to even deeper declines. 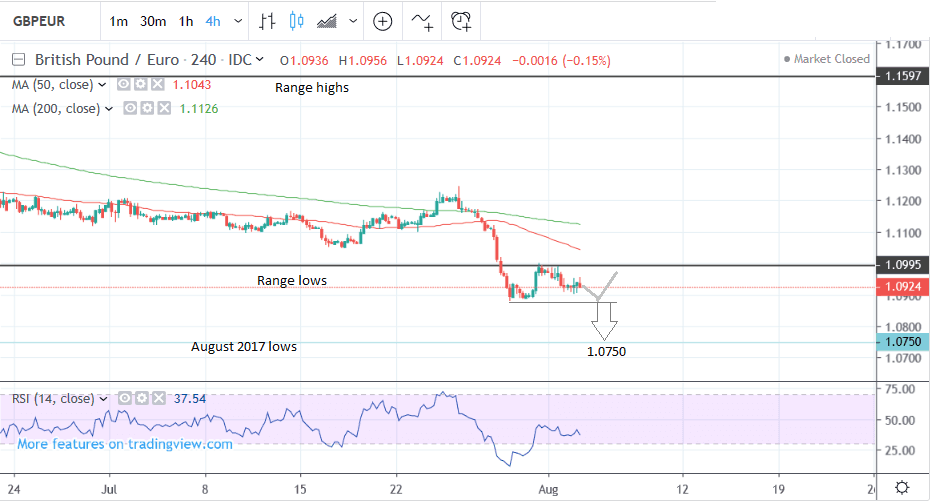 The pair has pulled-back since the July 30 lows and started going sideways and there is a risk if the pair does not break lower this sideways move between 1.0880 and 1.1000 could also carry on on the short-term. 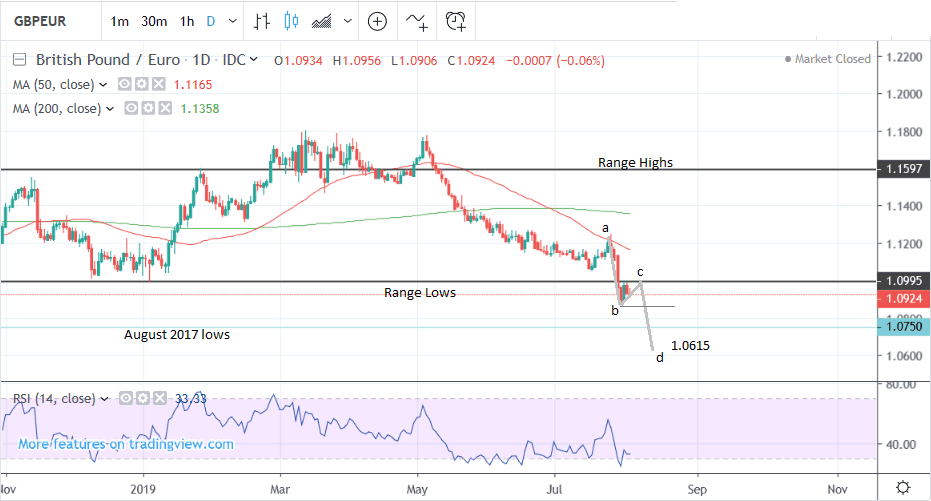 The daily chart - used to analyse the outlook in the medium-term which is defined as the next week to month - shows the pair in a downtrend within its range ever since the May highs.

Given the old adage that ‘the trend is your friend’ the current downtrend is biased to continue lower.

The most recent move down has formed what looks like a ‘measured move’. These patterns are composed of 3 waves in a zag-zag pattern with waves a-b and c-d usually of a similar length.

Assuming the middle b-c wave is playing out now, in the pull-back since the July 30 low, it suggests c-d will extend down to a target at 1.0615.

The weekly chart - used to analyse the long-term trend, defined as the next several months of market action - shows how the pair has broken out of a multi-year range. 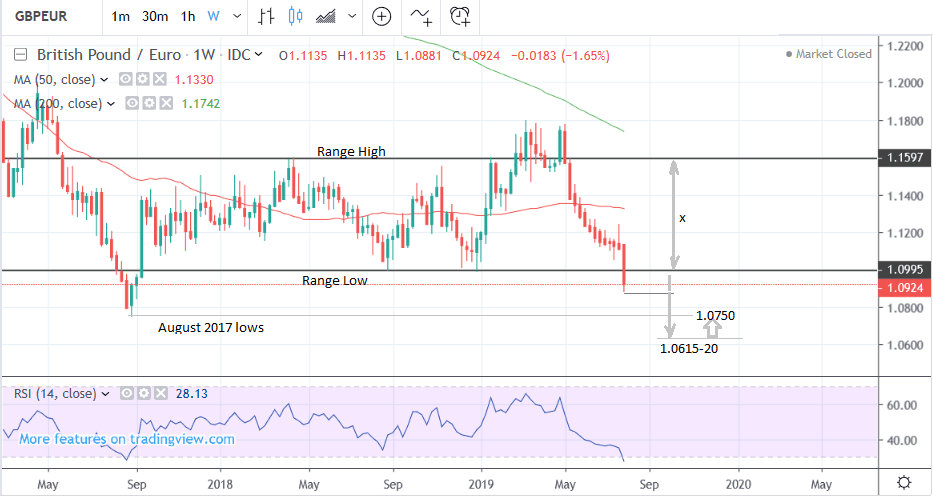 Now that the pair has broken and closed below the range lows on a weekly basis, it provides much stronger confirmation of a continuation of the downtrend.

The longer-term target based on the evidence on the weekly chart is for a move down to 1.0620 which is the 61.8% extrapolation of the height of the range (labelled ‘x’).

Given this is only 5 pips above the target from the daily chart we have widened the target into a range of 1.0615-20.

If the exchange rate reaches this target there is a higher risk of a bounce higher, probably back up to a target at 1.0750.

The Pound this Week: Brexit, GDP and PMI Data

Sterling retains a negative bias largely thanks to markets rapidly ramping up their expectations for a 'no deal' Brexit outcome on October 31 in response to the more robust approach adopted on the matter by the new administration of Boris Johnson.

Add to this growing expectations for a snap General Election before 2019 is out, and Sterling is seen to be facing an unprecedented cocktail of political uncertainties.

"The past week has witnessed some notable market movements, most visible of which has been the sharp fall in sterling which has seen the pound fall to levels last seen in 2017 against both the USD and the euro; GBP:USD hit a low of $1.2080 and GBP:EUR 1.0950 (€:£ 0.919). Growing concerns over the possibility of a no deal Brexit have been the predominant force behind the moves," says Ryan Djajasaputra, an analyst with Investec.

We are however wary that much of the news might already be 'in the price' of Sterling at this point, and wonder whether this theme can continue playing out unless some substantial political developments occur.

With much of the political class on their summer holidays, it could be that the issue dies down for some time.

However, noting the solid trend in Sterling we are wary of fighting the trend at this point.

"Looking to the forthcoming week there are no scheduled events which could shape Brexit sentiment given Parliament is in recess, but given the market sensitivity to Brexit we would be mindful of any comments which could come from government ministers or indeed other Tory MPs," says Djajasaputra.

The main economic release on the horizon for the Pound is GDP data for the second quarter of 2019.

The average forecast amongst economists is for growth to slow to 0.0% in Q2 from 0.5% in Q1, as Brexit risks weigh and based on already-released data for the quarter.

The 0.5% rise in Q1 was surprisingly strong but this was because businesses brought forward activity ahead of the original Brexit deadline on March 29 - this will not be the case for Q2, says American bank Wells Fargo.

Over the last 3 months leading indicators, industrial production and manufacturing production have also all softened, suggested growth was lacklustre in Q2.

The data is scheduled for release at 9.30 BST on Friday, August

“Growth in the British economy is forecast to have ground to a halt in the three months to June, slowing from the prior 0.5% rate. There’s a greater risk, however, of the data missing the forecasts than beating them given the heightened Brexit and political uncertainty during the period so a small contraction in Q2 wouldn’t be totally surprising,” says Raffi Boyadijian, an economist at FX broker XM.com. 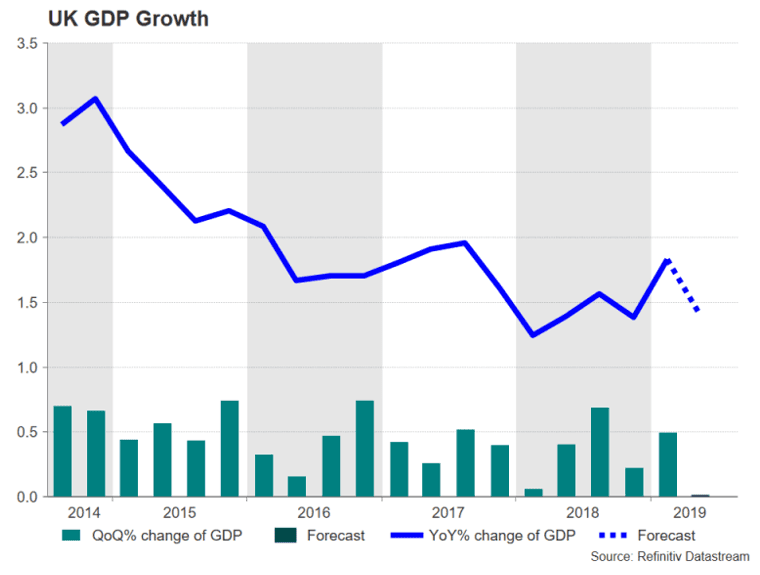 If the data is worse-than-expected and shows a contraction into negative territory the Pound could decline, and vice-versa if it is better-than-expected.

The other main market-moving release is Services PMI out on Monday at 9.30.

This is important because services is the largest sector in the UK economy and PMI’s are leading indicators which means they tend to provide an early indication of the hard economic growth data which follows.

Currently, the average forecast for Services PMI is that it rises to 50.4 in July from 50.2 in the previous month of June.

A better-than-expected reading would help Sterling and vice-versa for a miss.

It may be a quiet week for the Euro from a hard-data perspective but the currency could still be moved by commentary as well as continued speculation as to whether the European Central Bank (ECB) stimulates the economy in September.

Recent growth data for Q2 showed GDP rising 0.2%, which although in line with estimates, was subdued historically-speaking. Inflation data has also been underwhelming.

Many analysts now believe the ECB will cut interest rates in September in order to stimulate the economy. Some also expect the ECB to begin QE.  Analysts at Wells Fargo expect a rate cut in September and QE of 45bn in October.

German industrial orders are the main hard data release. They are forecast to show a recovery of 0.5% in June compared to the -2.2% slump in May when data is released on Tuesday at 7.00. If better-than-expected they have the potential to check expectations of material easing from the ECB, although only marginally.

"Within the euro area the main focus will be on the industrial sector in light of its continued weakness. Figures for the month of June will be due from three of the largest member states (Germany, France and Spain) providing an up to date health check on the sector," says Ryan Djajasaputra, an analyst with Investec.