Pound Sterling starts the new week slightly firmer against the Euro with 1 GBP buying 1.1585 EUR on the inter-bank market.

The Pound suffered five consecutive days of losses against the Euro last week, with the exchange rate falling over a percent and a half, confirming near-term momentum now appears to favour the Euro.

Losses came amidst growing expectations that cross-party Brexit talks in the UK were headed for failure while the Pound also found itself caught in the cross-fire of global trade tensions.

International financial markets were rocked by news that President Donald Trump has increased tariffs from 10% to 25% on $200bn of Chinese goods imported into the U.S. each year, which helped drag the Pound-to-Euro rate below the key 1.16 level late last week.

The Euro performed better amid the market rout than its British counterpart, with some analysts saying the Euro is showing some 'safe haven' tendencies. "The Euro... is higher and may finally be benefiting from risk aversion - it's an increasingly popular funding currency," says Kit Juckes, a foreign exchange strategist with Société Générale.

Concerning the exchange rate's outlook for the coming week, the return back beneath the 1.1600 level means the outlook has gone from bullish to neutral from a technical perspective.

Although the pair broke convincingly above the 1.1600 range-high several months ago, it has since been unable to extend meaningfully above that point and has now marked out a new trading range spanning the March 13 high at 1.1802 and the March 21 low at 1.1466. 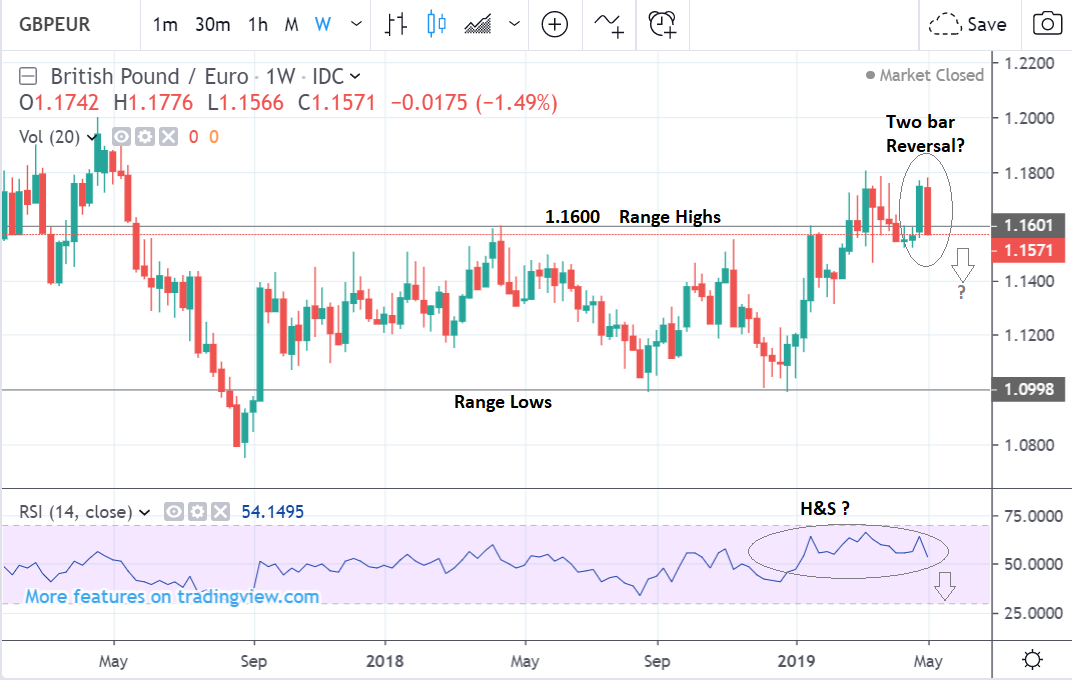 Momentum, as measured by RSI, also looks like it may have formed a topping pattern of sorts (circled) a little like a head and shoulders pattern, although the downside potential from this is probably marginal given how shallow it is.

The two-bar reversal pattern on the weekly chart produced when a long green upweek is followed by a similarly length long red downweek, as happened last week, is a bearish trend reversal sign which suggests more downside to come as a new downtrend begins.

A break above 1.1802 would probably provide confirmation for the next leg higher, up to a target at 1.1900. This is just below where the 200-week moving average (MA) is likely to cap further gains, which could happen in the next 2-6 weeks.

Likewise a move back beneath the March 21 low would provide confirmation of a bearish break to the downside, which would then see the market target 1.1360 and the 200-day MA. This might also occur in the next 2-6 weeks. 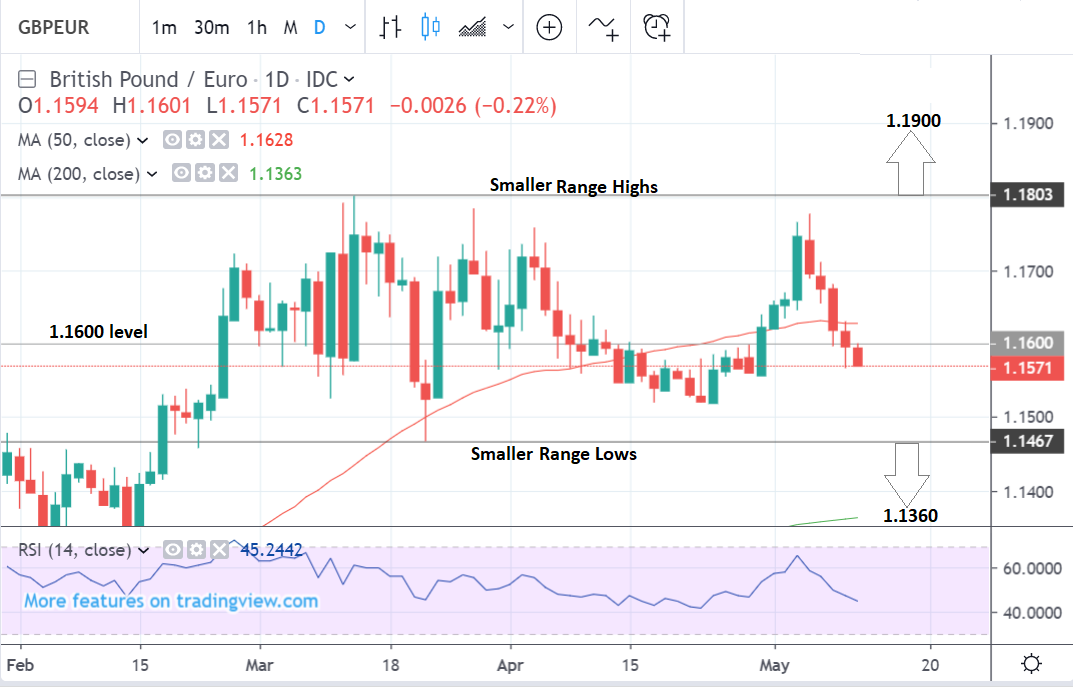 The main economic release out for the Pound this week is March jobs data. The UK labour market has been resilient in the face of political and economic uncertainty of late and if that idea is reinforced again this week then the Pound might benefit.

A strong labour market can mean rising wages, increased inflation and higher interest rates further down the line, which could then lead to a stronger Pound because currencies tend to rise and fall with interest rates.

A rise in support for Nigel Farage’s Brexit Party, which is leading in the polls with 34% of the electorate ahead of the May 23rd vote, may mean it's less likely Labour and the Conservatives will strike a deal as the pressure on the Conservatives to pursue a 'clean break' Brexit is growing.

In an intereview with the Guardian over the weekend, the leading Labour negotiator Sir Kier Starmer said it was increasingly likely that Labour would only back a deal that provided for a second  referendum on EU membership. Starmer said there was a huge segement of Labour parliamentarians that would only consider voting through a deal if a second vote was provided for, therefore he believes it would be futile to agree to any deal that does not provide for one.

The Conservatives would almost certaintly vote against any deal that does contain a provision for a second vote.

We expect the death of talks will be announced within days.

The prospect of May departing and a general election occuring over coming months therefore remains high, creating the kind of uncertainty that would be expected to keep Sterling under pressure.

The main driver of the Euro in the week ahead will probably be the escalating trade war between the U.S. and China.

The Euro was among the strongest risers against the Dollar towards the end of last week following news the White House had increased tariffs on some Chinese goods exports to the U.S.

China has said it will retaliate against the U.S., but talks between the two countries are still ongoing so there remains some chance the whole situation can be brought back under control.

On the economic data front, the only release likely to stir the market is the German ZEW economic sentiment index, which is a forward-looking indicator that measures sentiment among 350 German institutional investors.

The ZEW has shown some improvement over recent months and if it continues it could be seen as an early ‘green shoot’ for the economy, which may bode well in the future. The Eurozone has been showing possible signs of a gradual recovery recently and a strong ZEW would back this up. 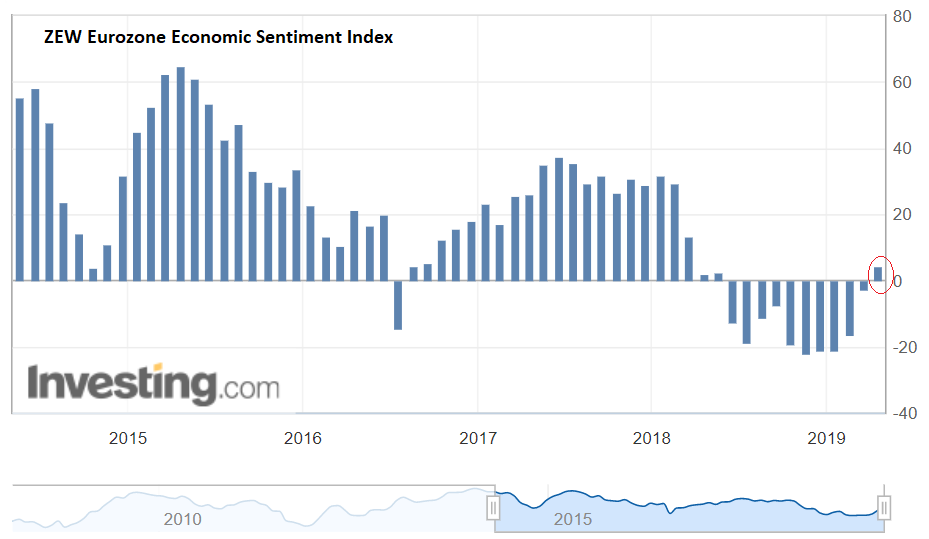 Last month the index rose into positive territory, registering at 4.5, after a 10 month period in which the index remained below zero. If this month's number builds on that increase then  could lead to some upside for the Euro. The ZEW is scheduled for release at 10:00 London time on Tuesday.

Another key release for the Euro could be industrial production data which is forecast to show a decline of -0.3% month-on-month in March, when it is released at the same time as the ZEW.