Construction PMI for March read at 52.2, just shy of expectations for 52.4 and short of the previous month’s reading of 52.5. 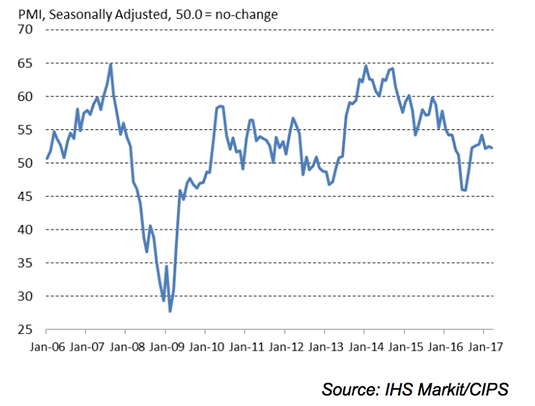 The miss was not severe and there was no notable reaction in Sterling.

At the same time, it didn’t provide the requisite strength to stimulate a recovery in Sterling which has endured a soft start to the new month and quarter against both the Dollar and Euro.

"Monday's weak manufacturing data got the FTSE and the Pound off to a slow start this week and today's underwhelming PMI construction number won’t be inspiring a recovery. In fact, GBP/EUR could edge much lower if retail sales data on the continent, released later this morning, shows that Europeans are coping well with rising inflation,” says Paul Sirani, Chief Market Analyst at Xtrade.

March data revealed a slowdown in growth across the UK construction sector, led by a weaker rise in residential building activity.

The latest survey also pointed to only a marginal increase in new work, which contributed to slower employment growth and a slight decline in input buying.

“Where the housing sector acted as the main engine of growth over the last four years, this month it was slower and stuttering, while overall purchasing activity in the construction sector was disappointingly tame, shackled by a lack of new orders and rising costs.”

Compilers of the report, IHS Markit and the CIPS, do however report that construction companies remain relatively upbeat about their near-term growth prospects, partly reflecting a stabilisation of client confidence from the post-referendum lows seen in 2016.

Optimism regarding year-ahead business activity picked up in March to its second-highest since December 2015.

At the same time, survey respondents noted that reduced Brexit-related anxiety and the resilient economic backdrop had a positive impact on new invitations to tender.

“As the sector showed strong optimism for future business, concerns over the skilled labour availability are likely to persist in coming months,” says Brock.

Now the trigger has been pulled to propel the UK out of the EU, Brock says the construction sector must keep an attentive eye on how the UK Government’s negotiations will play out and whether consumer and business caution returns to hamper further progress.”

The Construction PMI release is the least-important of the PMI trio with the Services PMI due out mid-week being the one to watch as the services sector accounts for over 80% of UK economic activity.