Britain’s bricks and mortar non-food stores caught up with the rest of the class in September when sales rose above pre-pandemic levels, but fresh coronavirus-related restrictions on activity and looming income declines could see that success snatched away again in October.

Sales rose 1.5% last month, building on an upwardly-revised gain of 0.9% for August, when consensus had indicated a 0% change was likely.

“The UK economy regained ground over the summer as business reopened, but nowhere has this recovery been more visible than in retail. Retail sales were already almost back to pre-virus levels in June and have exceeded them in the months since. But this remarkable progress may be beginning to run out of steam,” says James Smith, a developed markets economist at ING. 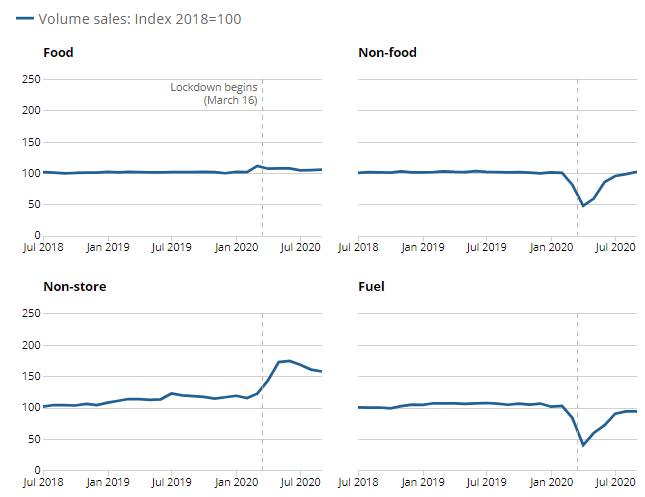 Growth was widespread across store formats as well as retail segments, although the most notable win was for sellers of non-food items, who saw sales rise 1.7% above February’s pre-coronavirus levels.

Household goods stores and “other” non-food stores led the recovery in non-food, continuing what had always been a swift rebound for those segments but enough so to lift total non-food sales back above their pre-pandemic levels.

But, and on the downside within non-food, retailers of music and video recordings as well as equipment remained below February’s levels. Beyond the non-food category, food sales pulled back from earlier highs along with online sales, while fuel sales still remained below pre-virus levels.

“The bigger picture is that we already expect the recovery to stall in Q4 and additional COVID-19 restrictions could easily cause consumer spending to reverse some of the gains it has made since April,” warns Thomas Pugh at Capital Economics. 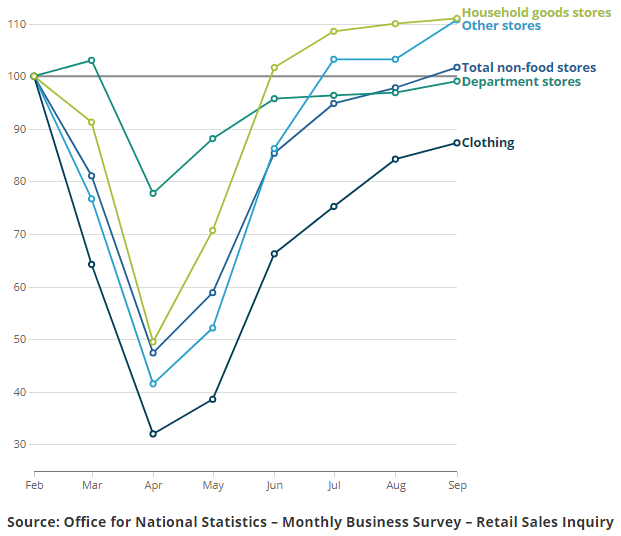 New government restrictions take effect in Barnsley, Doncaster, Rotherham, Sheffield, and Greater Manchester on Friday and Saturday, after they were placed into the "very high" risk or level three category of a new three-tier system, along with Lancashire on October 17.

These areas will see pubs and some other hospitality businesses closed again, with restrictions on social contact between households also being tightened in moves that could have indirect impact on consumer behaviour elsewhere.

English restrictions have been tightened, but in Wales, Scotland and Northern Ireland government actions have been even more draconian. All of this comes at a time when HM Treasury financial support is lessening for firms and workers who’ve been injured by restrictions on acitivity.

“Households’ disposable incomes will fall over the winter. The Job Support Scheme is less generous towards employees than the Job Retention Scheme, while self-employed people will receive a grant worth only 40% of their pre-Covid quarterly trading profits in November, down from 70% in August.  Mortgage payment holidays that one-in-six borrowers have accessed also will come to an end in Q4,” says Samuel Tombs, chief UK economist at Pantheon Macroeconomics. “Lastly, non-essential shops might be forced to close again before the year is out, as part of a brief “circuit breaker” lockdown.” 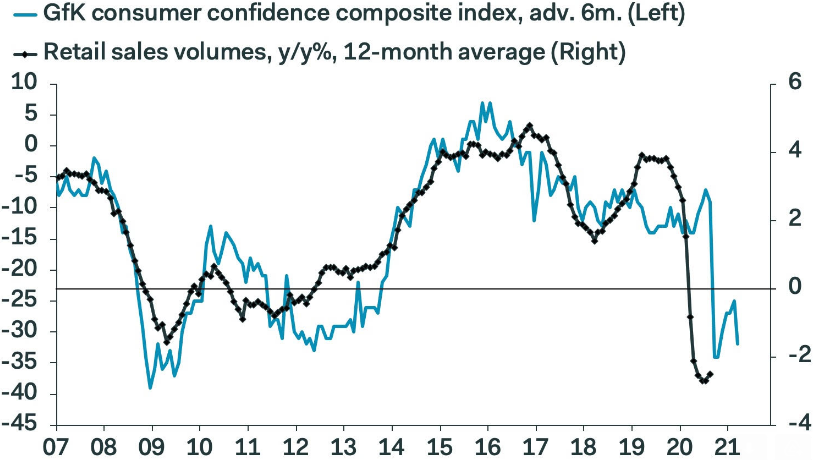 ONS data showed Thursday that 17% of companies in accommodation and food services judged themselves to be at "severe risk of insolvency" in October, and that some 9% of the workforce was still on either partial or full furlough just days before the scheme comes to an end on October 31.

"The PMIs suggest you shouldn’t read too much into the decent rise in retail sales in September released earlier today," says Paul Dales, chief UK economist at Capital Economics. "The PMIs provide a better sense of what’s happening to the overall economy. And it’s not looking good."

Chancellor Rishi Sunak won plaudits Thursday for new job and business support schemes, but even with the more generous furlough job scheme in full effect and backed in August by the now-ended Eat Out to Help Out initiative, the economy still struggled to recover much that month.

August GDP growth was just 2.1%, with more than 1half that being the result of Chancellor Sunak’s innovative, but now ended Eat Out to Help Out scheme. Economists had looked for a 4.6% increase and are now warning of a possible fresh contraction in the final quarter.

“We base our call for near-stagnation rather than a decline in Q4 GDP in the Eurozone and the UK on the assumption that the restrictions that are being imposed now will contain the spread of the virus,” says Florian Hense, an economist at Berenberg. "If daily infection rates continue to rise beyond early November, GDP would likely contract noticeably in Europe in Q4." 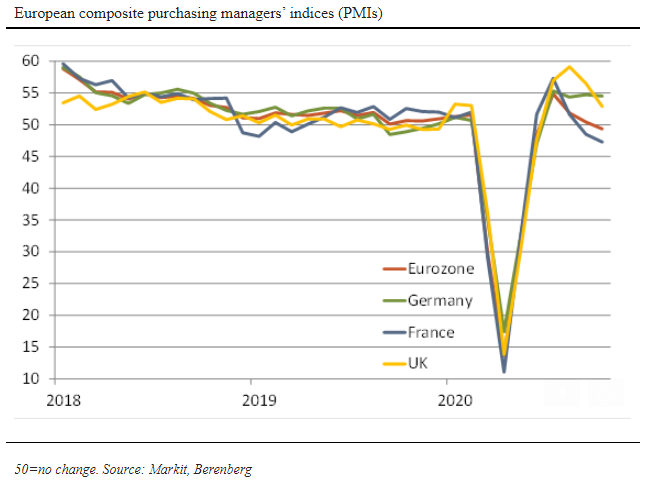