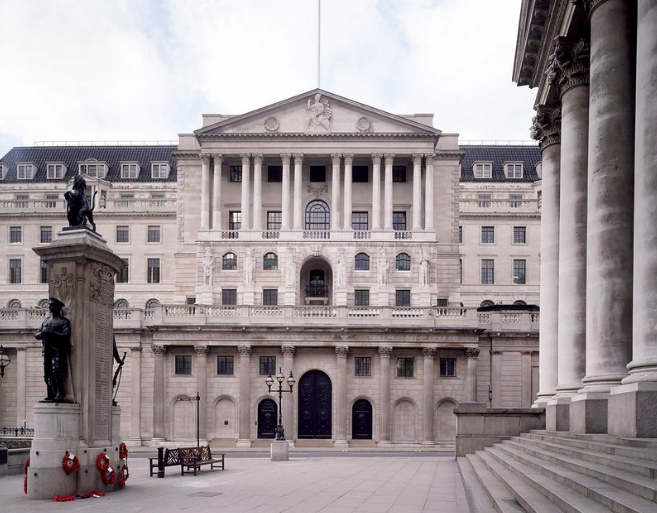 The Bank of England (BoE) left interest rates and other monetary policy settings unchanged Thursday but said it stood ready to act again as it took stock of a tightening in financial conditions, which could further imperil the economic outlook.

Having already initiated an unprecedented policy response to the coronavirus crisis at two unscheduled policy events in March, Monetary Policy Committee members voted to leave the offical Bank Rate unchanged at a new record low of 0.10% this week. The Bank also left unchanged arrangements to include an additional £200bn of sovereign and non-financial investment grade bonds in the BoE's quantitative easing programme.

That decision to cut interest rates and boost quanitative easing was unveiled in an uscheduled March 19 announcement, ensuring the BoE's total portfolio of bonds will be taken to £645bn, an amount equivalent to around 30% of GDP.

Once bought that £200bn would see the Bank of England own nearly half the outstanding stock of government debt as measured for the year to the end of March 2019, which was equal to 84.2% of economic output, although the bank's actual share of the market could remain largely unchanged once all is said and done because the government also intends to borrow close to an additional £200bn this year in order to see the economy through the coronavirus crisis.

"Agents reported that the fall in output had become much more widespread since the MPC’s special meeting ending on 10 March. Activity was falling rapidly in many sectors due to a combination of economic uncertainty, supply-chain disruption, travel restrictions and social distancing. Many contacts had suffered cashflow problems as revenues had fallen and had responded by reducing operations and working hours to save costs... Given the more restrictive measures introduced on 23 March, it was likely that economic activity would contract significantly further in April and in 2020 Q2 as a whole," said the Bank.

The BoE cut rates and boosted quantitative easing on March 19 to support the economy through a coronavirus crisis that's seen all but essential businesses 'ordered' to revert to homeworking or to close temporarily as citizens are also instructed to remain at home except under certain conditions to slow the spread of coronavirus.

That decision came barely more than a week after another unscheduled decision, to cut Bank Rate from 0.75% to 0.25%, amid what was then a mounting threat of economic disruption stemming from government strategies to contain the viral pneumonia that is thought to have escaped China's borders in January and has since been found in almost all countries on the planet.

"Governor Bailey is against the nuclear option of helicopter money. But with the government’s budget deficit set to blow out by around £190bn this year and the Bank already having committed to buying £200bn of assets, the lines between monetary and fiscal policy are already very blurred," says Paul Dales, chief UK economist at Capital Economics.

The Bank said global financial conditions had tightened significantly further and conditions in the UK gilt market had deteriorated substantially as investors had sought shorter-dated instruments that were closer substitutes for highly liquid central bank reserves.

The Bank has taken unprecedented action to ease the virus  burden on companies and households, which has been accompanied by significant measures from HM Treasury that seek to plug the hole punched into output by the so-called 'lockdown' announced by the Prime Minister this week. But these actions have not prevented a potentially perilous tightening of financial conditions that's been noted by the BoE.

Lower stock market valuations, wider spreads between yields on corporate and sovereign bonds as well as higher sovereign bond yields themselves have each contributed to the material tightening of financial conditions flagged by the BoE. The bank is clearly worried that tighter financial conditions could hamper the economy's ability to navigate the crisis but with Bank Rate already at the 'zero lower bound' and the BoE's quantitative easing program having been increased to around 30% of GDP already, it wasn't clear Thursday that it has the firepower to achieve any more than it already has.

"Implicitly it stands ready to step up the pace or ultimate size of its gilt purchases, if yields surge again," says Samuel Tombs, chief UK economist at Pantheon Macroeconomics. "QE will be escalated, should financial conditions deteriorate again, and the MPC likely won’t wait until its next meeting on May 7, if swifter action is required."