- As political uncertainty fades through much of January.

- Risks from trade talks, coronavirus litter the path ahead.

UK services firms offered up further signs of a growth rebound Wednesday when the IHS Markit PMI was revised to its highest since September 2018, although Brexit and other risks are now threatening the tentative recovery.

January's services PMI was revised up to 53.9 Wednesday, from the 52.9 declared in the flash release after new orders, employment and overall business activity rose further than was previously thought.

New orders rose at their fastest pace since mid-2018 as decisions that had been put off due to uncertainty about the outcome of the December election were finally made, leading to both an increase in hiring across the UK's largest economic sector as well as a pick up in total activity levels.

Hiring rose for a third consecutive month in January, taking employment growth to its highest level since the middle of 2019 while firms also lifted their projections for activity in the year ahead.

"We wouldn’t place too much weight on the precise number, but it’s clear responses received later in the month were much stronger than those at the start, consistent with the idea that the recovery is strengthening. On past form, the 53.3 level of the composite PMI points to GDP rising at a 0.3% quarter-on-quarter rate in Q1, above the MPC’s 0.2% forecast in last week’s Monetary Policy Report. Growth might be even stronger than this," says Samuel Tombs, chief UK economist at Pantheon Macroeconomics. 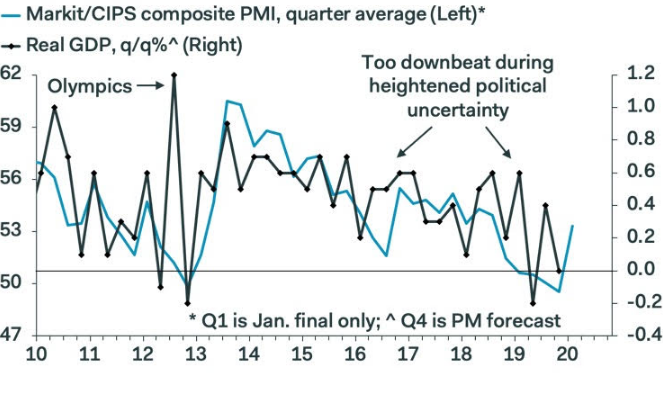 Firms may have grown more optimistic last month but the bulk of their feedback was given to IHS Markit before Monday's speech from Prime Minister Boris Johnson, whose rhetoric about Brexit trade negotiations prompted a brief sell-off in Pound Sterling earlier this week. This threatens to see uncertainty relating to 'no deal' Brexit risk return to haunt firms in the months ahead.

Johnson said in landmark speech from the Royal Naval College in Greenwhich Monday that he'll seek a Canada-style trade agreement with the EU in talks that are now getting underway and that the only alternative he'd be willing to accept is an 'Australia deal Brext,' which would see the UK and EU trading with each other on World Trade Organization (WTO) terms.

"With the manufacturing and construction surveys also rebounding in January, the all-sector PMI picked up from 48.9 to 52.8, a level consistent with a 0.3% q/q expansion in GDP in Q1, up from a probable 0.1% q/q decline in Q4," says Ruth Gregory, a senior economist at Capital Economics. "What matters now is if that actually happens. The rebound might not be quite that strong. But even if the PMIs prove a little optimistic, it looks a safe bet that the economy started to grow again at the start of this year."

Concerns over an "Australia deal" Brexit weighed on sentiment among companies last year, leading business activity to fall and leaving households to do the heavy lifting. The economy grew just 0.6% for the 12 months to the end of November, which is far below the BoE's estimate of the economy's inflation-producing rate of expansion, not to mention an actual 1.3% inflation rate that's a long way off the 2% target of the BoE. 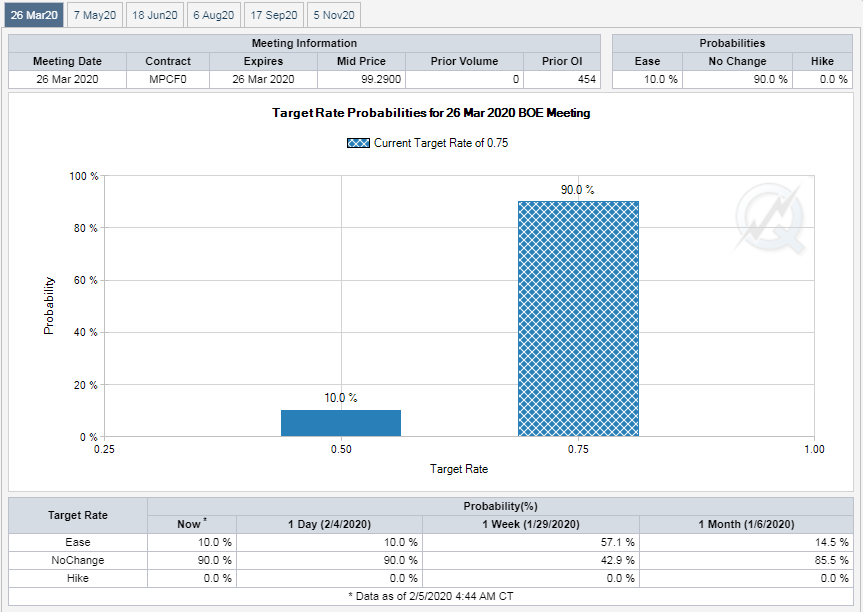 Above: CME Group estimates of market-implied probability for a March 26 Bank of England hold at 0.75% Vs rate cut to 0.50%.

Brexit talks are set to take until at least year-end although the UK has only until the end of June to request any extension of the transition period provided by the EU withdrawal agreement and economists were already looking for growth to slow again in 2020 even before Monday's headline-grabbing speech from Johnson that now risks reversing the recent 'Boris Bounce' in the PMI surveys and further undermining the outlook for the year ahead.

Wednesday's PMI comes barely a week after the Bank of England downgraded growth forecasts for the UK economy this year but kept its inflation projections consistent with the 2% target in two years time and left Bank Rate unchanged at 0.75% at least until March 26.

How the economy and the Brexit talsk evolve between now and that March meeting, which will be the first decision under new Governor Andrew Bailey, will be key to whether Bank Rate and Pound Sterling can sustain current levels.

And so too will developments around the spread of coronavirus in China and beyond, given the deadly disease has brought the world's second largest economy to a standstill in a slowdown that could very easily hit the Eurozone economies with implications for the nearby UK.

"Like the Bank of England, we envisage GDP growth rising to +0.2% q/q in Q1. This and the prospect of a further lift to growth from fiscal policy will probably be enough to keep the MPC on hold this year and prompt rates to rise to 1.00% by the end of 2021," Capital Economics' Gregory adds.