- UK wage growth hits another post-crisis high of 4% in July.

The UK jobs market remained in rude health during July, Office for National Statistics figures revealed on Tuesday, as the domestic economy appeared to weather the calamitous Brexit saga and infighting in parliament as well as global turmoil caused by the U.S.-China trade war.

Unemployment fell by 10 basis points to 3.8% in July, down from 3.9% previously and 4.2% in the same period one year ago, when financial pundits had looked for it to remain steady at 3.9%. The number of unemployment claims rose from 19.8k to 28.2 k in July, although this was below the 29.3k consensus.

Tuesday's data follows behind other figures showing the economy rebounding strongly out of an earlier trough at the beginning of the third-quarter, while both sets of official numbers stand in stark contrast to the message coming from private sector business surveys like the IHS Markit PMIs. The headline numbers paint the picture of a labour market that is in rude health but, and on the downside, employment growth has slowed notably following years of strong gains and some say it's now dimming the outlook. 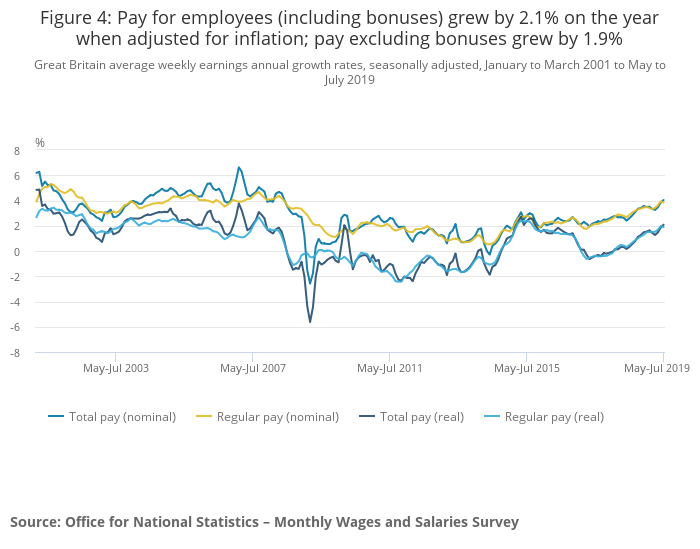 "Annual employment growth may no longer be rising, but it is still slightly above its long-run average of 1.0% and the unemployment rate remains at a joint 45-year low. So the labour market still looks set to provide solid support to the economy over the next few years and could prevent the Bank of England from becoming too dovish against the weakening global backdrop when it meets again next week," says Ruth Gregory at Capital Economics.

Markets care about the labour market data because falling unemployment and improving job creation are thought to put upward pressure on wages. Pay growth leads to increased demand in an economy and upward pressure on inflation, with implications for interest rates and financial markets. Changes in rates are normally made in relation to the outlook for inflation, which is sensitive to economic growth.

Economists have long warned that jobs growth would slow as 'full employment' approaches, and the Bank of England (BoE) says the UK is already below that level, which it estimated to be 4.25% in May 2019. The BoE said in November 2018 that wage growth needs to fall, not rise, in order for it to meet the 2% inflation target over the coming years. A desire to cool the labour market is part of the reason the BoE remains committed to an "ongoing tightening" of monetary policy that sees interest rates rise steadily.

"The renewed fall in the unemployment rate distracts from an otherwise troubling labour market report. Employment was only 31K—0.1%—higher in the three months to July than in the previous three months, well below the 89K average increase seen since the Brexit vote in 2016," says Samuel Tombs, chief UK economist at Pantheon Macroeconomics. "The downturn in vacancies has gathered momentum, down 23K on a three-month-on-three-month basis and 75K on a year-over-year basis in August, the steepest fall since October 2009. On past form, the vacancy data are consistent with year-over-year growth in employee numbers slowing to zero later this year." 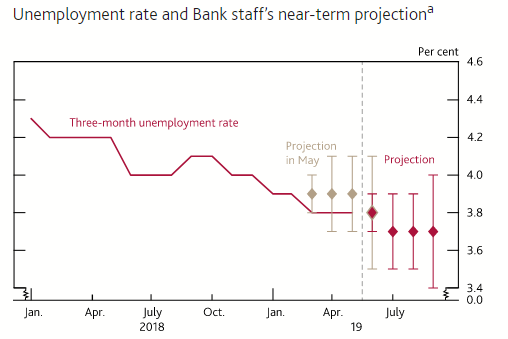 The current condition of the labour market may have the Bank of England fearing further inflation-boosting pay increases for workers but private sector economists are increasingly suggesting that such growth will prove to be short-lived. Pantheon's Tombs says the UK's "so-called jobs miracle is losing its shine" while Capital Economics' Gregory says other UK economic indicators are consistent with a "further softening" in the jobs market up ahead.

What happens to the labour market later this year will be key to the UK interest rate outlook and the trajectory of Pound Sterling because a combination of slower economic growth and softening jobs growth would undermine the wage and inflation fears propping up the BoE's case to lift rates. This alone would put pressure on the BoE to bin its commitment to lifting interest rates, although markets are now also pressuring the bank to do just that.

The BoE normally conditions its forecasts and policy stance on financial market assumptions for interest rates over the coming years, which now point toward rate cuts rather than hikes. Pricing in the overnight-index-swap market implied Tuesday that Bank Rate would sit at just 0.50% in April 2020, which suggests investors anticipate at least one full BoE cut over the coming months. But Pantheon's Tombs is sceptical of the idea the BoE might cut rates anytime soon.

"Brexit uncertainty undoubtedly has sapped firms’ enthusiasm for hiring new workers, but sharply rising unit labour costs also are playing a role. The pick-up in the headline rate of wage growth to the symbolic 4% level—the highest rate since 2008—has not been accompanied by any improvement in productivity, which still is flatlining. With surplus labour scarce, workers are flexing their muscles," Tombs writes, in a note to clients. "Accordingly, the outlook for strength in domestically-generated inflation suggests that the MPC can’t cut Bank Rate just because employment growth is losing momentum." 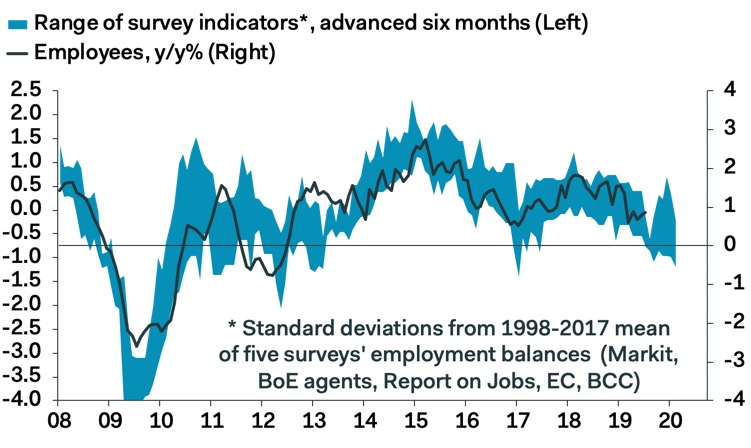 Tuesday's data comes amid heightened fears of both a general election as well as 'no deal' Brexit, after the opposition in the House of Commons and rebels within the governing Conservative Party hijacked the parliamentary agenda and passed a bill requiring Prime Minister Boris Johnson to seek another extension to the Article 50 negotiating period, contrary to the government's policy and opening a constitutional can of worms in the process.

Johnson, after staking his premiership on a "do or die" pledge to take the UK out of the EU on October 31 regardless of whether formal arrangements have been agreed, is seeking to drum up support in parliament for an election in which the fate of Brexit will be decided.

However, after having called for a new poll around twice every week for more than a year, the opposition has now refused to back an election on two consecutive occasions. It says it's reluctant to go back to the ballot box until the UK's EU exit has been delayed for what will then be a third time.

The UK economy is puttering along and the Brexit saga drawing on within a greatly-deteriorated international context, which has been dominated by the trade war between the U.S. and China. The tariff fight between the world's two largest economies has escalated on repeated occasions this year and led global economic growth to slow sharply. And many say it could yet slow even further.

Readers can get the latest on the Brexit saga and its implications for Pound Sterling exchange rates here.