- Data comes midway in make or break quarter for the economic outlook.

- But as Brexit looms, some see scope for stock buidling to save the day.

The UK manufacturing sector saw its fourth consecutive month of contraction in August, according to IHS Markit, as the U.S.-China trade war and the ongoing Brexit saga both took their toll on industrial firms midway through what is a make-or-break quarter for the economy.

The UK manufacturing PMI fell to 47.4 in August, down from 48.0 previously and beneath the market consensus for an unchanged reading, marking the lowest level for the index since 2012 and the fourth consecutive occasion it's come in below the 50.0 no-change level that marks the difference between industrial expansion and contraction.

New orders fell at their fastest pace for more than seven years and output continued to contract in August, while the index that measures business optimism about the future fell to a new record low as manufacturers unprecedented uncertainty on both the domestic and international fronts. President Donald Trump's tariff fight with China is hurting the global economy and export demand while the UK's pending departure from the EU is ruffling feathers in the domestic market.

"We still doubt that manufacturing will pull the economy as a whole into recession," says Andrew Wishart at Capital Economics. "The survey might be worse than reality. The PMI didn’t capture in full the impact of unseasonal shutdowns of car plants and the hangover from Brexit stockbuilding last quarter, both of which will provide a boost in Q3." 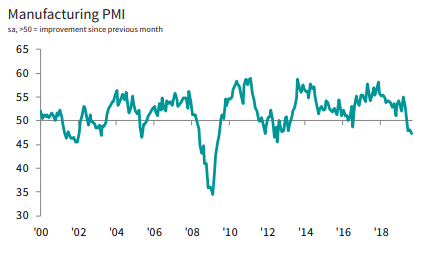 Some had said before Monday's results were published that the sector may have been boosted by firms' preparations for the current Brexit deadline on October 31, in much the same way as it was during the opening quarter of 2019. Manufacturers bought more materials and made more products during that quarter in order to insure themselves against any disruption at ports following the first Brexit deadline of March 29, which boosted the economy.

However, and while stockpiling activity lifted GDP growth to 0.5% in the first quarter, the subsequent decline following the now-deferred Brexit day helped drive the economy to its first contraction since 2012 in the second quarter. Economists are now waiting with bated breath to hear if growth fell again in the current period, because if it has the UK would then be in a 'technical recession'.

"The renewed fall in the manufacturing PMI in August—to its lowest level since July 2012—indicates that support from another round of no-deal Brexit preparations currently is too modest to insulate U.K. producers from the global downturn. The U.K.’s PMI is only trivially above the Eurozone’s—47.0 in August—and the former might even fall further, given that the new orders index slumped to 44.4, from 46.9 in July," says Samuel Tombs, chief UK economist at Pantheon Macroeconomics.

Tombs says that with Office for National Statistics (ONS) figures showing inventories among manufacturers having returned to normal normal levels in the second quarter, there should still be a pick-up in activity before October, but concedes that the IHS Markit survey suggests any resulting boost to growth will not be as big as it was the first time around. 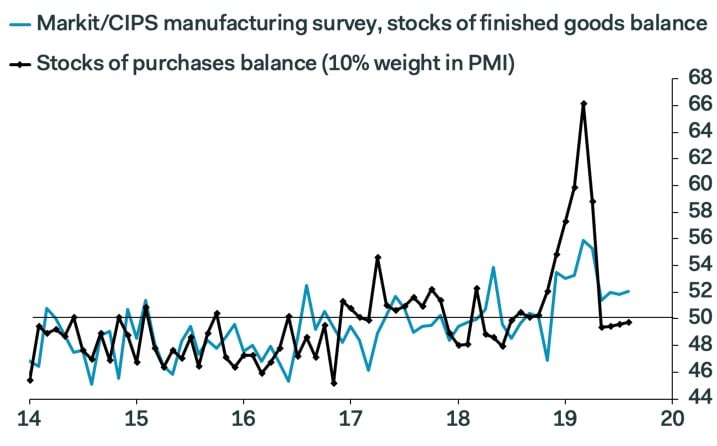 UK retail sales have been strong in recent months and have consistently surprised on the upside of economist estimates, which is notable for the growth outlook because consumer spending accounts for a substantial portion of overall GDP. Those figures could provide the economy with a cushion in what might turn out to be a testing quarter, as trench warfare continues in Westminster.

"Opposition MPs are expected to attempt to take over the parliamentary policy setting agenda tomorrow to propose legislation to request the government to seek another Article 50 extension beyond the end of October. The exact form of the request is not yet known," says Lee Hardman, a currency analyst at MUFG.

Prime Minister Johnson is planning to suspend parliament from September 12 and until October 14, when a Queen's Speech will be held, in what Downing Street says is a legitimate move that has domestic purposes but which critics claim is an attempt to force through a 'no deal' Brexit.

As a result, opposition MPs in parliament, and some Conservative Party MPs, will have less time with which they could attempt to pass legislation that prevents the UK from leaving the EU on October 31. And whether those MPs succeed or not will be key to the path taken by the economy over the short as well as medium and long-term.

Johnson has staked his premiership on a pledge to withdraw the UK from the EU on October 31 regardless of whether formal arrangements have been agreed with the bloc, which could mean a 'no deal' Brexit plays out in barely more than two months time.

However, and paradoxically, some see efforts by MPs to prevent such an exit actually making one more likely. And most now see a potentially-damaging general election as all but inevitable this Autumn. Readers can find out more about what that might mean for Pound Sterling and UK exchange rates here.

"Expect a messy few days ahead. MPs loyal to Johnson will try to take counter steps to make it hard for moderates to block a hard Brexit through legislation alone. Even with the help of House of Commons speaker John Bercow, who has previously showed a willingness to break conventions in order to give parliament more of a say over the Brexit process, stopping a hard Brexit will not be easy. MPs will first need to take control of the parliamentary agenda before passing a law to block a hard Brexit," says Kallum Pickering, an economist at Berenberg.