The UK manufacturing sector saw output stabilise in August after a multi-month period of declines that saw it subtract notably from economic growth, which was negative in the second-quarter, reinforcing forecasts from some economists that growth should rebound in the current quarter.

Manufacturing output volumes rose in seven out of 17 sub-sectors during August, according to the Confederation of British Industry (CBI) Industrial Trends Survey of 286 manufacturers, after a pickup in domestic and export orders resulted in the overall order book being down to a lesser extent than in the previous month.

Some 15% of firms said order levels were above normal this month while a larger 28% said work inflows are below normal levels, resulting in a net -13% balance on the CBI index. That's up from a negative -34% in July and exactly in line with the long term average for the metric.

Around 24% of businesses said output rose in the past three months while 27% said it was down, resulting in a small negative net balance of -3%. That's up from -11% last month but still below the long-term average of +4%. Expectations for growth in selling prices during the months ahead were reported at their lowest since February 2016.

"Despite signs of stabilisation in the data this month, UK manufactures remain on the receiving end of a double whammy: the slowdown in the global economy and Brexit uncertainty. Trade tensions between nations such as China and the US only exacerbate the demand uncertainty facing UK manufacturers," says Anna Leach, deputy chief economist at the CBI. 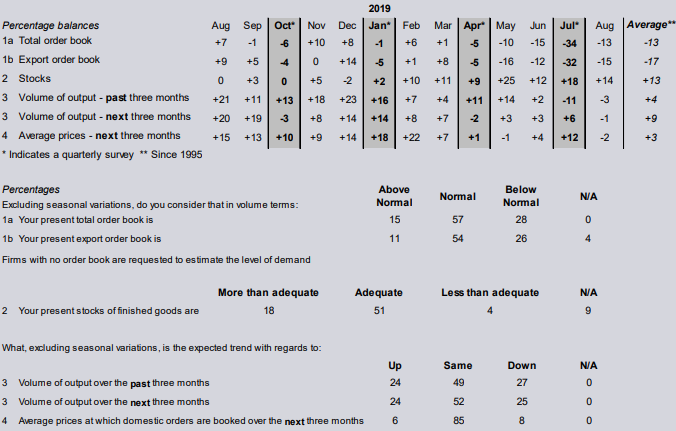 Tuesday's survey results still paint a picture of a struggling manufacturing sector, although much less so than was the case in July and all of the second quarter. UK GDP growth turned negative last quarter because manufacturers ramped up production in the opening quarter to build stocks of finished products as insurance against disruption in the wake of the original March 29 Brexit date.

Output was always likely to fall after that point as production slowed in order for the excess stocks, which were reported at more normal levels in the CBI survey this month, to be sold off. However, that roll-off in activity came at a time when the global manufacturing sector is in the midst of a slowdown, with Eurozone manufacturers having been in recession for a year now.

German firms bet big on the Chinese car market in recent years, which is now unravelling due to the trade war with the U.S. This, EU regulations impacting the automotive sector and the ever-present threat of a 'no deal' Brexit are why German manufacturers have suffered disproportionately in recent quarters.

The CBI says that expectations among manufacturers are for inventory stocks to remain at normal levels in the months ahead but some independent economists and researchers are forecasting another build up again before the current scheduled October 31 Brexit day.

One such person is Samuel Tombs, chief UK economist at Pantheon Macroeconomics and a top-rated forecaster with Bloomberg and Reuters, who says even manufacturing stabilisation is enough to lift growth this quarter. 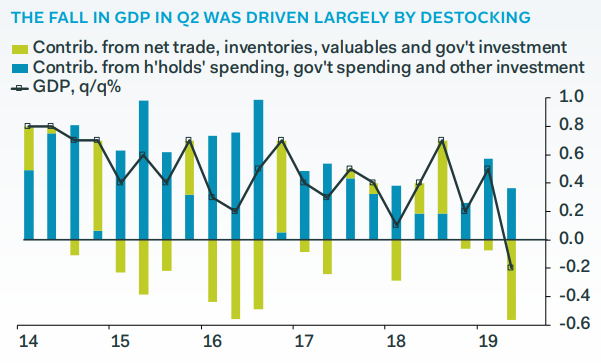 Above: Pantheon graph showing changes in the contribution of 'net trade' to GDP.

"Stocks dampened quarter-on-quarter GDP growth by 2.1pp, as the change in inventories swung to -0.9%, from 1.3%. So if inventories hold steady in Q3, they will boost GDP growth by 0.9pp. In reality, the boost to growth will be even bigger than this, because firms will rebuild stock levels in advance of the October Brexit deadline," Tombs writes, in a recent note to clients.

Tuesday's CBI survey follows official data released last week, which showed the volume of UK retail sales rose by 0.2% in July when markets were looking for a 0.3% decline to partly reverse the substantial 1% gain seen in June at the end of the second quarter. This means sales were up 0.7% in the three months to the end of July and by 3.9% for the year to the end of July, which is important because spending on the high street feeds into overall household spending.

Sales have consistently surprised on the upside of a gloomy and Brexit-fearing consensus this year, which is important because overall household spending is a large component of overall GDP because the Office for National Statistics counts "final demand expenditures" to arrive at its figures. Other economists say this too will contribute to the averting of a 'technical recession' in the UK this year, which is defined as two consecutive quarters of economic contraction.

"The rise in retail sales in July was encouraging and supports our view that the economy has picked up in Q3 after contracting by 0.2% q/q in Q2," says Gabriella Dickens at Capital Economics. "Of course, the retail sector only makes up about 30% of total household spending. But spending growth off the high street appears to have remained fairly steady. So July’s figures leave us more confident that the economy avoided another contraction in Q3."