- As manufacturing activity ramps up ahead of the next Brexit date.

The Pound advanced against the Dollar, Euro and other major rivals Thursday after being aided higher by strong July retail sales figures that have encouraged speculation of a third-quarter economic recovery in the UK, although analysts say the Brexit saga will soon begin to haunt the British currency once again.

Retail sales rose by 0.2% in July, according to Office for National Statistics data, when consensus had been for a 0.3% decline to partly reverse the substantial 1% gain seen in June at the end of the second quarter.

This means sales were up 0.7% in the three months to the end of July and by 3.9% when last month's figures are compared with the same period one year ago. The increase was driven by a strong gains for non-store retailers and the first monthly growth of 2019 for the beleaguered department store sector.

"July’s retail sales figures continue the trend of above-consensus numbers which demonstrate that consumers aren’t fazed by the Brexit deadline. Granted, Amazon's Prime Day, which the retailer has run every July since 2015, probably was chiefly responsible for the colossal 6.9% month-to-month rise in non-store sales, which made a 0.7 percentage point contribution to growth in total sales," says Samuel Tombs, chief UK economist at Pantheon Macroeconomics.

Tombs has warned that sales could fall in August because some shoppers may have brought forward some of their spending in order to take advantage of the discounts offered by Amazon, although he also says the trend is positive and consumers can be relied upon to steady the UK economic ship following a second-quarter contraction that was larger than markets anticipated.

"The rise in retail sales in July was encouraging and supports our view that the economy has picked up in Q3 after contracting by 0.2% q/q in Q2," says Gabriella Dickens at Capital Economics. "Of course, the retail sector only makes up about 30% of total household spending. But spending growth off the high street appears to have remained fairly steady. So July’s figures leave us more confident that the economy avoided another contraction in Q3."

Markets care about the data because it reflects rising and falling demand in the economy, which is key to the outlook for inflation pressures central banks are attempting to manipulate when they tinker with interest rates. UK interest rates are widely expected by the market to be reduced in the months ahead as the Pound and economy navigate the country's pending exit from the EU, with both being factors that have weighed on the Pound of late.

"The incoming data is by no means painting a picture which makes it obvious how the BoE should act going forward. Macroeconomic data is still playing, at best, second fiddle to concerns over Brexit," says Fritz Luow, an analyst at MUFG. "Yesterday’s curve inversion and 10bps drop in the 2-year and 10-year tenors in US Treasuries suggests that concerns over the global economy will not be shaken off by mere delays in tariffs." 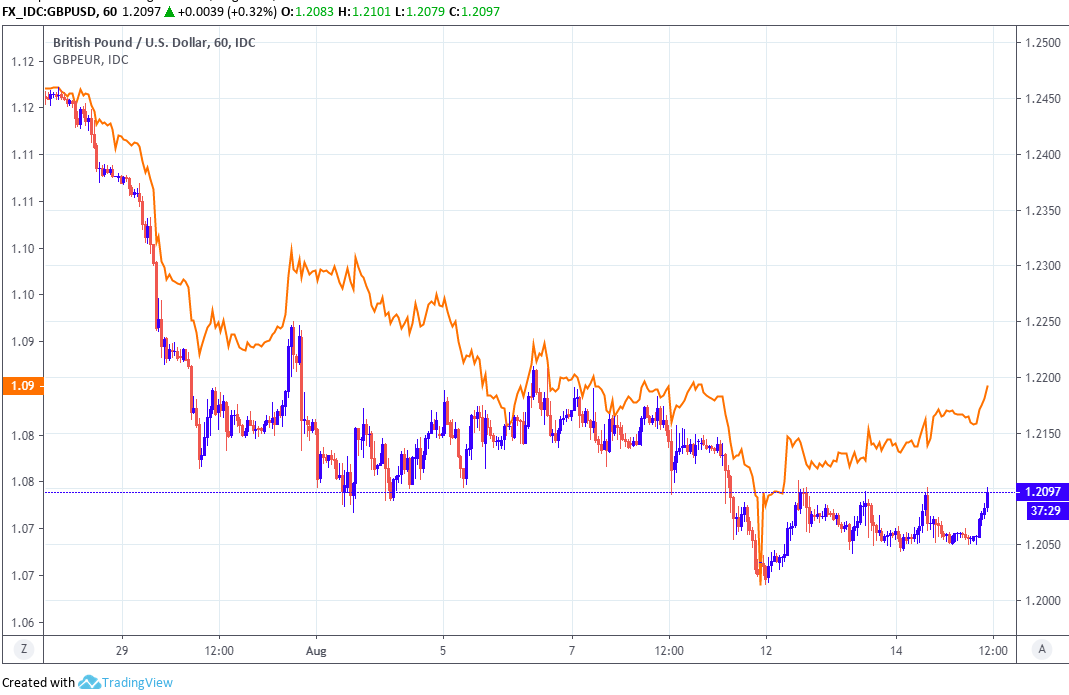 "While economic news is a focus for the pound, for most of this year it has been secondary to the political wrangling in the UK. The current summer parliamentary recess is calming the news flow from Westminster. However, there is good reason to suspect that this will step up when UK politicians re-enter the fray on September 2," says Jane Foley at Rabobank.

"September is thus shaping up to be an eventful month for GBP investors. Or house view remains that Brexit is likely to be delayed beyond October. This is likely to bring a sigh of relief from investors and a modest reprieve for the pound," Foley says, in a recent research note. "Any GBP bounce is likely to be half-hearted. Our 3 month forecast is EUR/GBP 0.90. On a no deal Brexit we see EUR/GBP rising to parity." 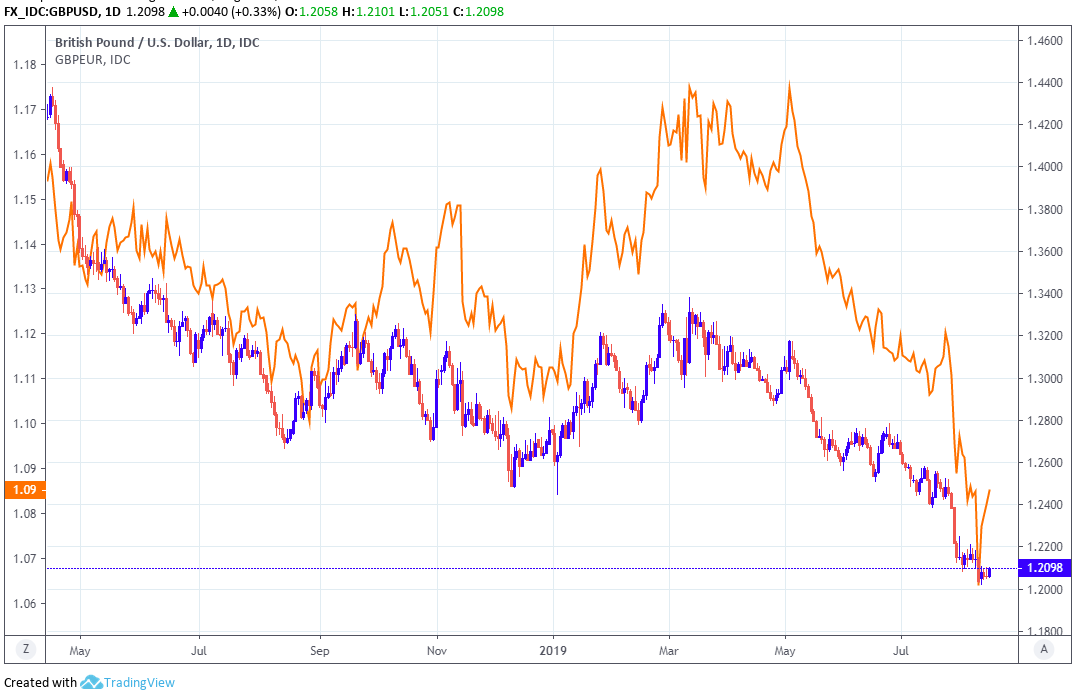 "The debates and votes in Parliament are likely to continue in the same heated manner in which they ended. Sterling’s ordeal is far from over," says Antje Praefcke, an analyst at Commerzbank.

Thursday's data comes amid elevated uncertainty over the path the UK will take out of the European union, with fears of a 'no deal' Brexit having increased ever since Boris Johnson prevailed in the Conservative Party race to succeed Theresa May as Prime Minister.

It also follows data that revealed the UK economy contracted during the second quarter, marking the first outright decline in output for six and a half years, with much of the downturn being the result of erratic movements in imports and exports either side of the original March 29 Brexit date.

"The risk of a recession remains very low. The 0.2% quarteron-quarter drop in GDP—the first drop since Q4 2012, when the boost from the Olympic Games unwound— undershot our forecast and the Bank of England’s; both were zero. But the downside surprise was driven entirely by the volatile inventories component of GDP, which will swing to making a very powerful positive contribution to growth in Q3," says Pantheon's Tombs.

Above: Pantheon graph showing changes in the contribution of 'net trade' to GDP.

The UK economy grew strongly in the first quarter as manufacturers imported more materials than normal and churned out more finished goods than they otherwise would have, in order to ensure they were protected from any potential disruption at the ports following the anticipated but now lapsed Brexit day.

That lifted growth during the first quarter only the high levels of inventories built up and a subsequent extension to the Article 50 negotiating window mean activity tailed off rapidly during the second quarter. This was the main driver behind last quarter's contraction.

However, and with another Brexit date of October 31 now rapidly approaching, Pantheon's Tombs says the same pattern looks set to repeat itself with the third quarter GDP number. This should mean the UK escapes a so-called technical recession, which is defined as two back-to-back quarters of negative growth, but it does suggest there's also a risk of another fourth-quarter contraction even before the UK actually departs the EU in the closing months of 2019.

"Stocks dampened quarter-on-quarter GDP growth by 2.1pp, as the change in inventories swung to -0.9%, from 1.3%. So if inventories hold steady in Q3, they will boost GDP growth by 0.9pp. In reality, the boost to growth will be even bigger than this, because firms will rebuild stock levels in advance of the October Brexit deadline," Tombs says, in a recent note to clients.

Above: Pantheon graph showing changes in inventories and contribution to UK GDP.