-Time is running out for NAFTA deal say BofAML strategists.

-Investment flows liable to dissipate, posing threat to the CAD.

The Canadian Dollar weakened for a second consecutive session Tuesday as strategists at Bank of America Merril Lynch, one of the world's top ten investment banks, warn that further losses are lurking just around the corner for the Canadian currency.

Tuesday's price action comes as oil extends its recent declines, with the US WTI benchmark now at a two-month low ahead of Friday's Organization of Petroleum Exporting Countries summit, and as investors contemplate the likely implications of the latest escalation in a so called trade war between the US and China.

President Donald Trump has instructed US trade representatives to begin preparing to impose a 10% tariff on imports of more than $200 billion in Chinese goods, which has already drawn a threat of retaliation from the Chinese Ministry of Commerce and may have far-reaching implications for US inflation, economic growth, interest rates and the Dollar.

This matters for the Canadian Dollar not just because Canada sits on the northern US border but also due to the ongoing deterioration in US-Canada trade relations, which was on full view at the G7 summit this June. This saw Trump publicly criticise Prime Minister Justin Trudeau after the latter hit out at White House trade policy in a conference with the media.

The barbed remarks from both sides were seen lessening the chances of a succesful renegotiation of the North American Free Trade Agreement anytime soon and raising the prospect of a possible US withdrawal from the trade pact. Now, strategists at Bank of America say "time is running out" for a deal and the Canadian Dollar is looking increasingly vulnerable to losses.

"Until very recently, our baseline was for continuation of a protracted and bumpy negotiation process, a scenario in which we saw USD/CAD rising on a trend basis into the middle 1.30s. However, given recent deterioration in US-Canada trade relations since the G7 and a corresponding increase in the likelihood of US withdrawal from NAFTA, we now see higher and sharper USD/CAD upside potential," says Athanasios Vamvakidis, European head of FX strategy at Bank of America Merril Lynch. 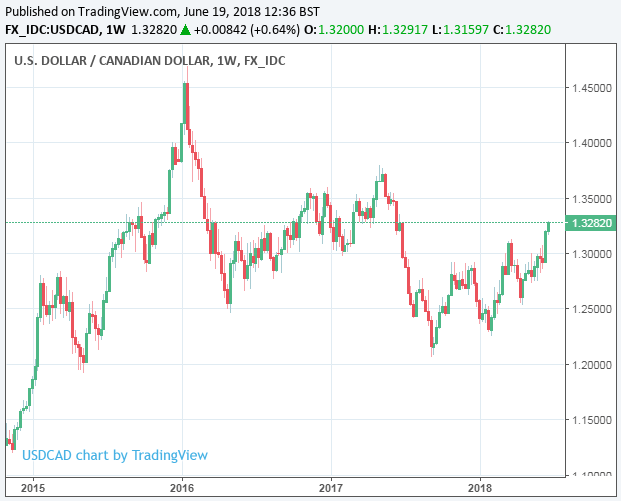 Vamvakidis says there is still "a chance" of a deal being cobbled together over the coming weeks and months but that this is unlikely. And the risks around the Loonie are tilted decisively toward another leg higher in the USD/CAD rate and, presumably, renewed weakness in other Canadian Dollar exchange rates.

Securing a new deal is important for Canada and the Loonie because other analysts have previously estimated the currency could fall as much as 20% if the White House goes for the nuclear option and announces a US withdrawal from the agreement. This would set the clock ticking on a six month termination period.

Negotiators have been attempting to reform the NAFTA pact for close to a year now, at the behest of President Donald Trump. But little progress has been made and markets now expect the talks to be stymied by the July 01 Mexican presidential election, which could itself see the Mexican stance toward the US harden, and the midterm US elections due in November.

"We initiated a bullish view on USD/CAD in November 2017 and reaffirmed it back in early March. Our view has been predicated on shaky balance-of-payment (BoP) flow dynamics alongside the risk that the BoC might potentially fall behind the Fed if exogenous shocks forced it to take a more measured approach to the rate tightening process," Vamvakidis adds.

The BofAML team have flagged Canada's current account deficit, which shows the extent to which the country is reliant upon fund inflows from the rest of the world in order to sustain itself, as the Loonie's achilles heel. If the NAFTA negotiations sour further or the US simply walks away from the table then Canada's appeal to international investors would be damaged.

If less advantageous trade arrangements with its southern neighbour lead investment flows into Canada to dwindle then the country's current account deficit would widen at a time when it is most important to close the gap between the amount of money flowing into and out of the country and the extent to which the government is reliant on overseas financing. 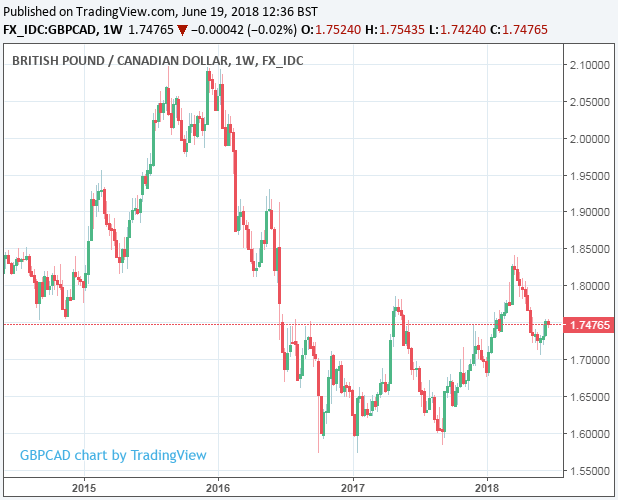 Vamvakidis and the BAML team are actively betting that the recent deterioration in relations will lead the NAFTA talks to drag on into 2019 and that the uncertainty thrown up by this will deter investment flows that would otherwise have made their way into Canada. This will be bad for the Canadian Dollar, particularly if the Bank of Canada backs away from meeting market expectations for three interest rate rises before the end of March 2019.

They have recommended that clients of the bank use a currency "options", which are complex financial derivatives, in order to profit from an anticipated surge in the USD/CAD rate during the coming months. The reason they use this strategy rather than just selling Canadian Dollars and buying US Dollars is that, if they turn out to be wrong, client losses will be limited to the cost of the options rather than the difference in the underlying exchange rate that prevails after a deal is reached.

The trade will pay out if the USD/CAD rate is above the 1.3325 level on or before September 26, 2018. Profits will be the difference between the 1.3325 level and the prevailing market rate at the time, suggesting a tacit expectation that the exchange rate will rise during the third quarter.