Pound Sterling traded up near to the 1.58 level against the Canadian Dollar during the opening session last week as North American currencies appeared to be given a wide berth by the market but a volley of better-than-expected U.S. economic data was quick to curtail GBP/CAD’s climb.

U.S. economic data mounted a strong argument against the notion of an imminent recession in the world’s largest economy, placing a floor underneath the greenback and seemingly helping to support other regional currencies like the Canadian Dollar too.

But dispersal of the U.S. economic storm clouds that had gathered overhead through the second half of July was just one of several factors to rein in GBP/CAD last week with others including the latest Bank of England (BoE) policy message and employment figures out of Canada.

“US/Canada 2Y spreads narrowed around the twin jobs report to near flat but OIS pricing continues to reflect strong odds of an aggressive Bank of Canada policy hike next month (66bps of implied tightening) after the jobs dust settled. This may help limit pressure on the CAD in the short run,” says Shaun Osborne, chief FX strategist at Scotiabank. 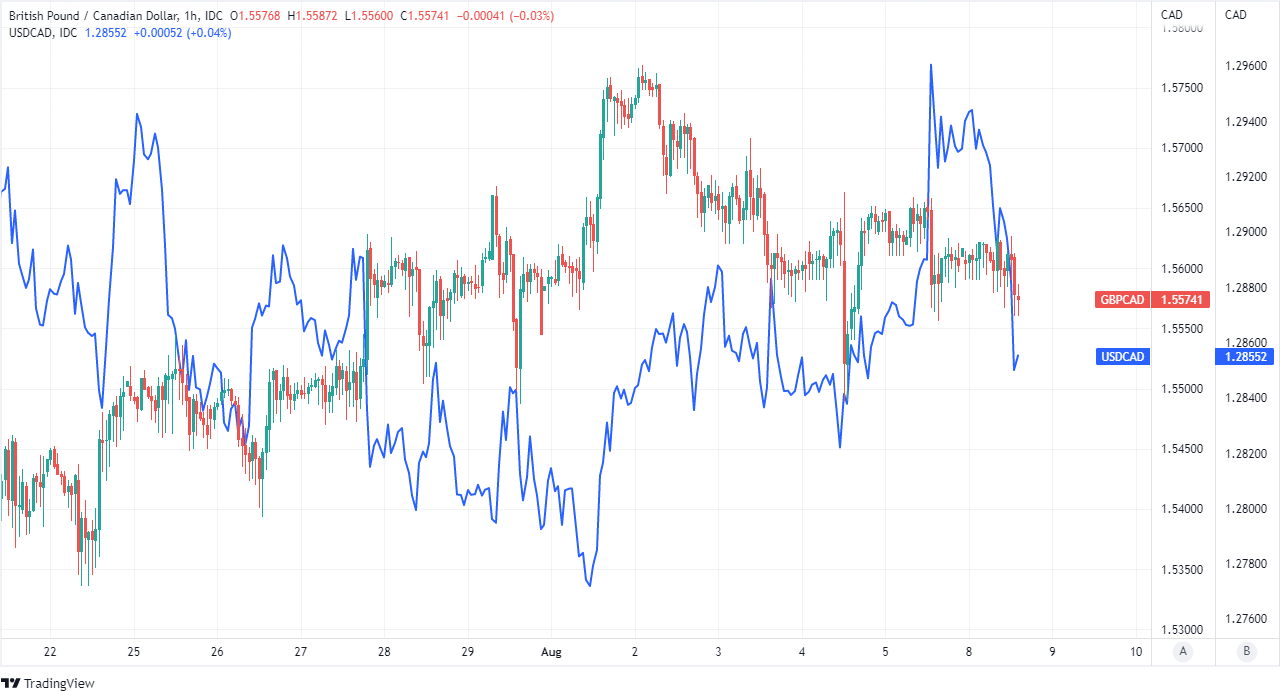 Above: Pound to Canadian Dollar rate shown at hourly intervals with USD/CAD.

“Soft and weakening correlations between the CAD and stocks and commodities perhaps tilt risks more towards choppy range trade in the near-term, with USDCAD gains perhaps restrained to the mid/upper 1.29s—where we anticipate USD supply may emerge. About the only thing we can conclude with anything near certainty right now is that scope for significant CAD appreciation remains extremely limited,” Osborne also warned on Friday.

Canada’s economy shed jobs for a second consecutive month in July but the unemployment rate remained at 4.9% and wages continued to grow at an annualised pace of 5.2%, which may have led the market to conclude that the Bank of Canada (BoC) is likely to continue with the more aggressive monetary tightening and interest rate policy adopted in recent months.

That is potentially supportive of the Loonie and a limitation for GBP/CAD.

“Canada is still sitting at an ultra-low jobless rate, and if the US isn’t in recession, it’s unlikely that Canada is. Yes, the yield curve has been looking a bit scary of late, with US ten-year rates getting awfully close to where the fed funds rate sits. But for those who think the shape of the curve is the ultimate guru, even that benchmark wasn’t flashing a clear recession signal,” says Avery Shenfeld, chief economist at CIBC Capital Markets. 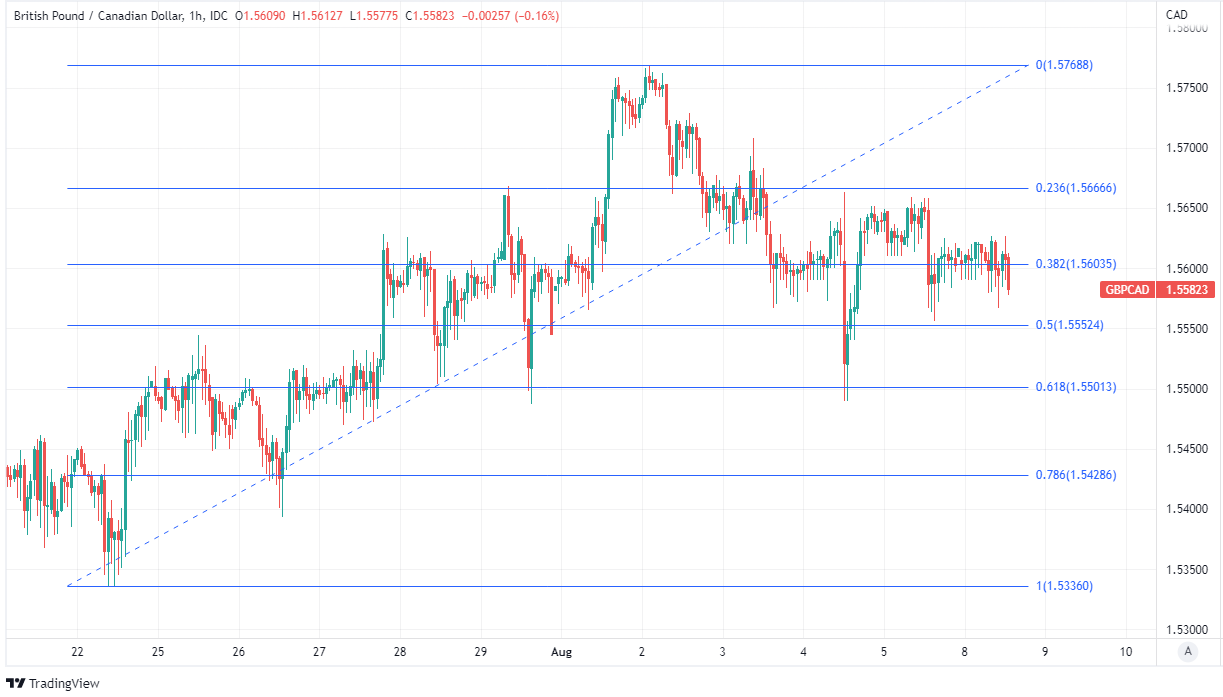 “Still, if not worthy of an R-rating yet, there’s enough blood to be shed in both the US and Canada that this is a film that’s not for the faint of heart. Because while July hiring and pay hikes vouched for the non-recessionary status of the US economy today, the inflationary impetus of all that hiring risks seeing the Fed pushed into the same unpalatable choice that the Bank of England made this week,” Shenfeld also said on Friday.

However, Sterling has also recently been additionally burdened by the Bank of England’s latest economic outlook and interest rate stance.

“It's easy to see why the Bank's fears of a wage-price spiral are justified (Figure 2). On a 12M avg. (3M YoY) basis, private sector pay rose by 7.1% in May, as job vacancies remained near their record high. 7.1% growth in nominal private sector pay is miles away from the rate of wage growth consistent with 2.0% CPI,” says Stephen Gallo, Europe head of FX strategy at BMO Capital Markets. 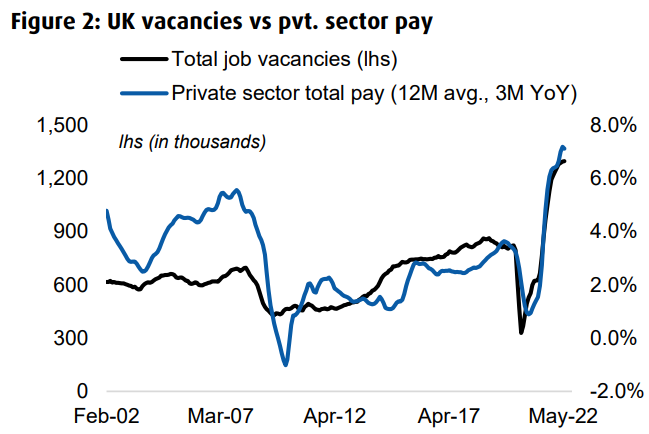 “While tightness in the labor market is arguably a short-term plus for the demand side of the economy, we do not view a wage-price spiral as a positive factor for the GBP — largely because a scenario like this risks an even harder landing for the economy,” Gallo also said on Monday.

The BoE announced its largest interest rate rise since 1995 last week and did not rule out further equivalent steps in future, citing concerns that domestic firms would continue to lift their own prices in response to inflation imported through energy and other goods.

But it also kitchen-sinked its economic forecasts when projecting an economic downturn that it expects will run as deep and last for even longer than the recessions seen in both the early 1990s and the early 1980s. This also appeared to stifle appetite for Sterling while weighing on GBP/CAD. 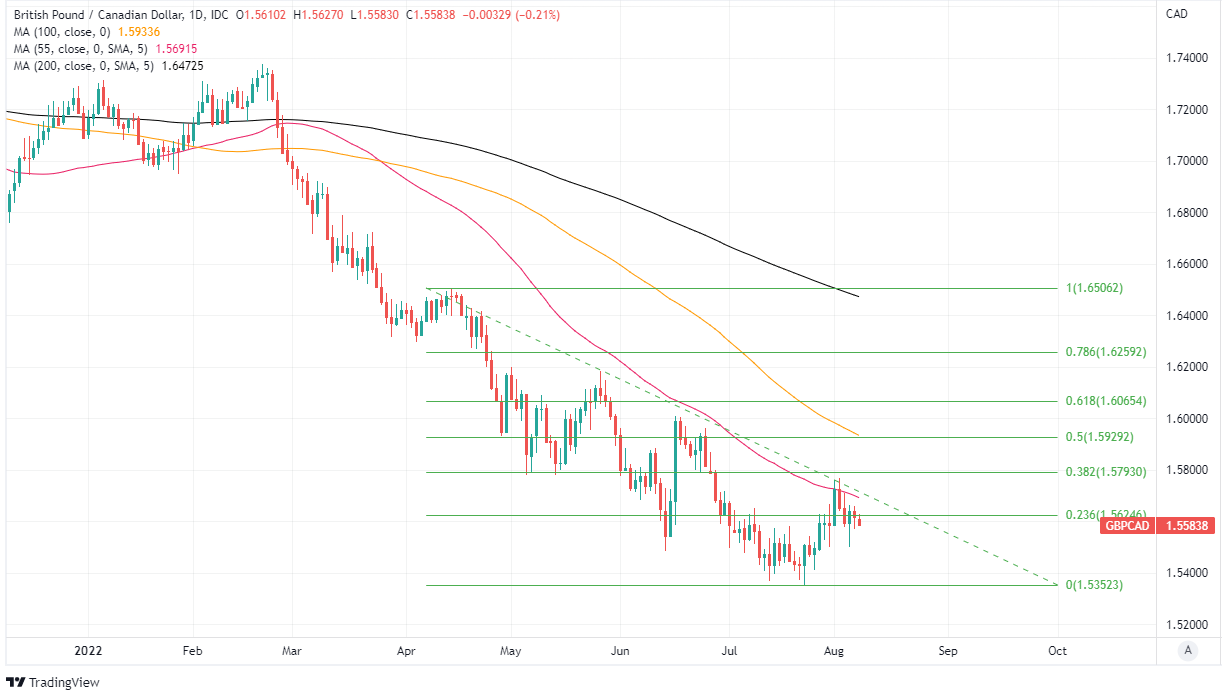 “With most borrowing costs in the UK tied to the longer end of the curve, refinancing costs might not edge up that much, while inflation expectations will be well contained. The real canaries in the coal mine from this strategy are the economies of Australia, New Zealand, and Canada, where household debt is much more elevated (Chart 13), and the percentage of variable rate mortgages are higher,” Ntonifor said in a recent review of the outlook for Sterling.

Stratospheric increases in household energy bills are the main drivers of an anticipated recession that will be made deeper by the BoE interest rate response, and this is all a part of why Sterling could be at risk of fresh losses relative to the Canadian and U.S. Dollars if a still-hawkish Federal Reserve is further incited by Wednesday’s U.S. inflation figures, which are the highlight of the week ahead for global markets.

Any strengthening of the U.S. inflation pulse might force the market to price-in a more aggressive interest rate response from the Federal Reserve with potentially positive implications for the U.S. Dollar, which would be less of a risk for the Loonie than Sterling if recent price action is anything to go by.

"This week's data is expected to show a contraction in Q2 GDP largely because GDP fell in April (-0.2%), and possibly fell again in June by an even larger amount. But even if real GDP growth surprises positively on Friday, it's quite likely that Q3's outcome will be worse," Gallo said of this week's UK data. 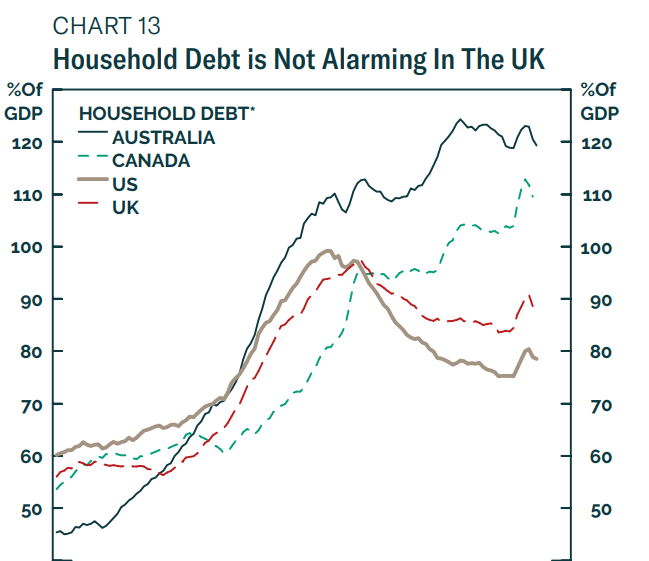