The Pound to Canadian Dollar exchange rate entered the new week on the front foot but could struggle to extend its early advance by much in the days ahead unless an action packed UK economic calendar is able to foment a further improvement in market appetite for Sterling.

Canada’s Dollar was an underperformer on Monday alongside the U.S. Dollar while Sterling, the Euro and other European currencies were outperformers in trading that saw GBP/CAD recovering above 1.55 once again.

“USD is under pressure to start as markets price out odds of a 100bps hike from the Fed. Nonetheless, this offers opportunities to scale into fresh USD longs” says Bipan Rai, North American head of FX strategy at CIBC Capital Markets.

“We don’t think other central banks have the horses to keep up with the Fed going forward. We like being long the USD against high betas for now (including against the NZD and CAD),” Rai said on Monday.

Monday’s price action came in the wake of a University of Michigan survey showing consumers’ long-term inflation expectations falling and after a series of Federal Reserve (Fed) officials appeared to discourage the market from betting that U.S. interest rates would rise by 1% in July. 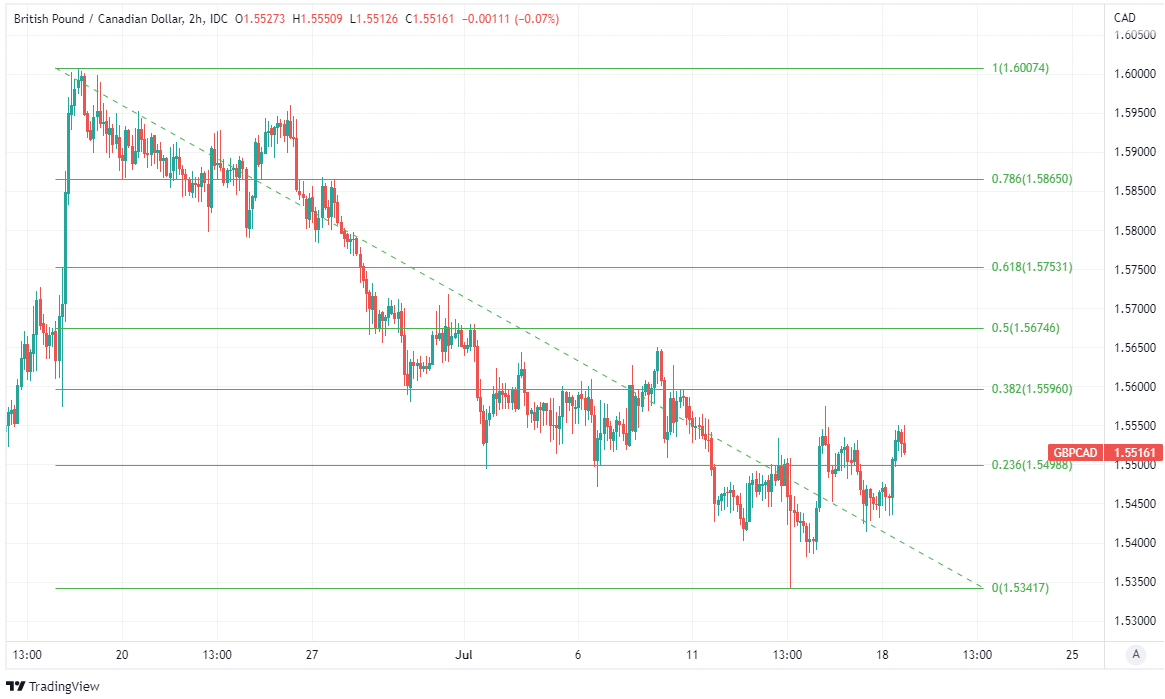 Above: Pound to Canadian Dollar rate shown at hourly intervals with Fibonacci retracements of mid-June decline indicating possible areas of short-term technical resistance for Sterling and support for the Loonie. Click image for closer inspection.

Overnight-index-swap contracts had suggested briefly last week that investors were beginning to anticipate an exceptional 1% U.S. rate rise after the Bank of Canada (BoC) made exactly that same move last Wednesday and following U.S. inflation data that surprised on the strong side of expectations.

“Markets read the BoC’s decision as a signal that other G10 central banks might also prefer to act aggressively at upcoming meetings, and raised expectations for more front-loaded policy from the Fed, especially given the latest US CPI report which exhibited strong, broad-based inflationary pressures,” says Michael Cahill, a G10 FX strategist at Goldman Sachs.

“Going forward, the policy path will likely be highly data-dependent, as the Bank evaluates the incoming wage and inflation data for evidence that inflationary pressures are slowing. If there is little evidence that these pressures are beginning to abate, our economists see a material risk of another 100bps hike,” Cahill said on Friday after reiterating a recommendation that clients sell NZD/CAD, which has a positive correlation with GBP/CAD.

The BoC pulled ahead of the Fed last week when lifting its cash rate by 1% to 2.5%, leaving Canada with the highest cash rate among G10 economies, although the Loonie’s gains were short-lived against many currencies with the exception of a retreating U.S. Dollar. 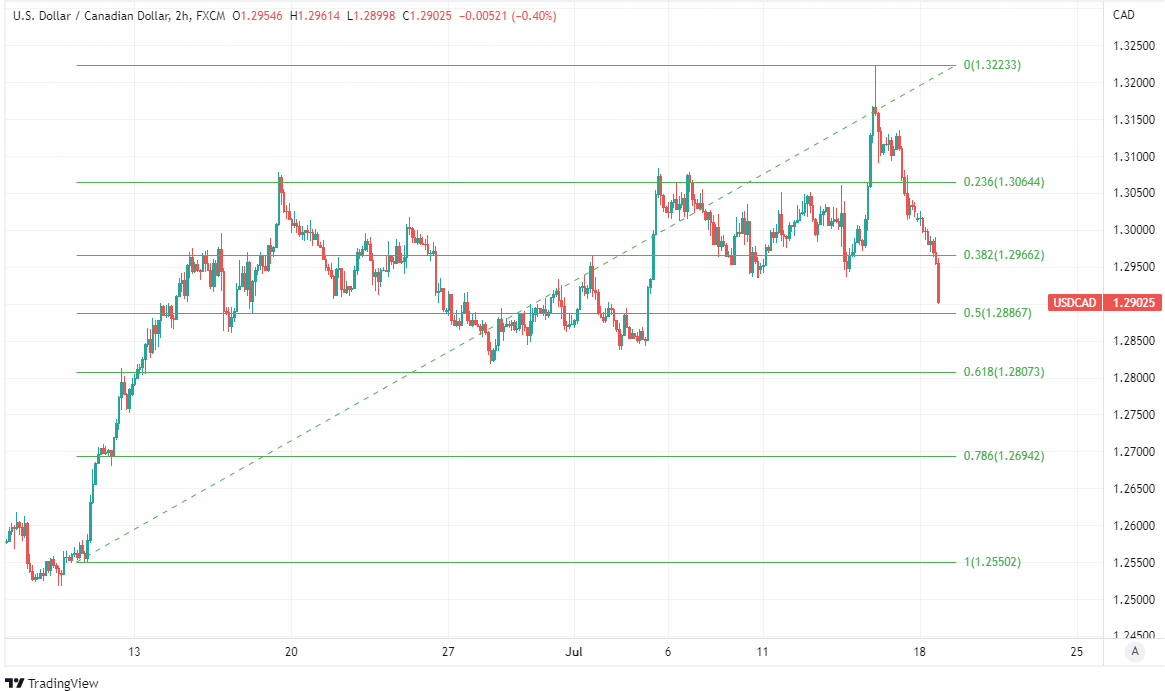 Above: USD/CAD shown at 2-hour intervals with Fibonacci retracements of July 05 rally indicating possible areas of short-term technical support for the U.S. Dollar and resistance for the Loonie. Click image for closer inspection.

Canada’s Dollar did benefit on Monday as the U.S. Dollar fell with USD/CAD slipping back toward the 1.29 handle but its gains were not enough to offset recoveries by Sterling, which recovered smartly from 10-year lows beneath 1.54 last week, or other European currencies.

“USDCAD has traded steadily and quite significantly lower from last week’s peak above 1.3220/25 and is trading below the short-term, daily trends support at 1.2985 on the session,” says Shaun Osborne, chief FX strategist at Scotiabank.

“We look for the upper 1.29 area to cap short-term USD gains now and for spot to test intraday support at 1.2935,” Osborne said on Monday.

Much about the outlook for GBP/CAD depends on price action in USD/CAD, which will be sensitive to the direction of the U.S. Dollar, as well as the response of Sterling to a raft of important UK data due out this week. 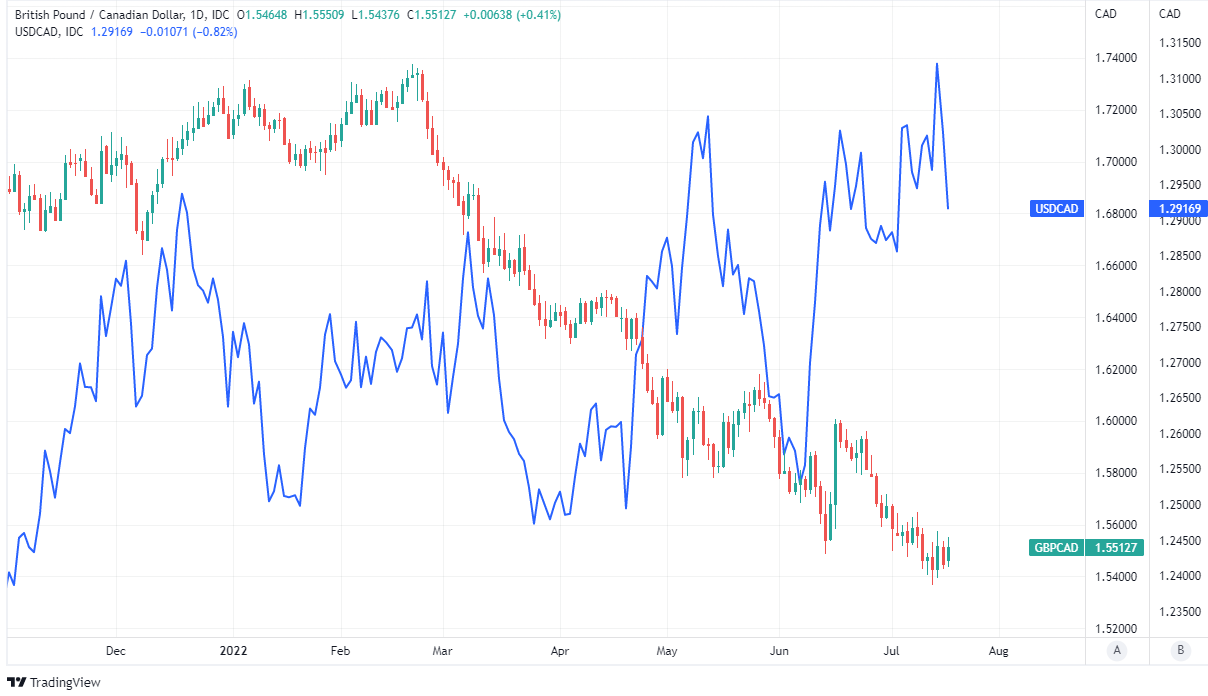 GBP/CAD tends to closely reflect the relative performance of the Loonie and Sterling when each is measured against the U.S. Dollar but would potentially struggle to advance beyond Monday’s levels without a continuous improvement in appetite for Sterling or further losses for the U.S. Dollar.

Hence the importance of the busy UK data calendar this week including the latest employment, inflation and retail sales figures, all of which could potentially impact market expectations for Bank of England (BoE) interest rate policy between Tuesday and Friday.

Meanwhile, and for as long as it persists, the correction in USD/CAD places a limit on the recovery in GBP/CAD during what is a quiet period for Canadian data once beyond Wednesday’s release of inflation figures for June.

“We still continue to favour a move higher in the [USD/CAD] pair as we still envisage a higher terminal for the Fed relative to the BoC and as macro headwinds to demand loom large,” he also said on Monday.