It wasn't until after Wednesday's European close that Canada's Dollar began to participate in a raucous mid-week recovery of commodity currencies, many of which had been swept up and pushed from pillar to post last week as a wave of profit-taking blighted 2021's top trades and trends.

Australia and New Zealand's Dollar rallied sharply alongside the Norwegian Krone throughout the day but it wasn't until late in the mid-week session that the Canadian Dollar began to catch up in an advance that brough USD/CAD into contact with the round number that is 1.25 and 0.80 for CAD/USD.

The afternoon's USD/CAD declines weighed heavily on the Pound-to-Canadian Dollar rate, dragging it back toward 1.7200 along the way in a turn of price action that could feature as a persistent headwind for Sterling over the coming months if strategists at Credit Suisse have made the right call by upgrading their near-term forecast.

"We remain constructive on CAD ahead of next week’s fiscal budget announcement on 19 Apr and of the BoC’s interest rate decision on 21 Apr. We see Covid-19- and lockdown-related risks to the growth outlook as limited for now," says Alvise Marino, a New York-based FX strategist at Credit Suisse. "The Bank of Canada may announce a very gradual plan to reduce asset purchases: we think this would add to the already ongoing reduction in balance sheet growth, with positive implications for CAD." 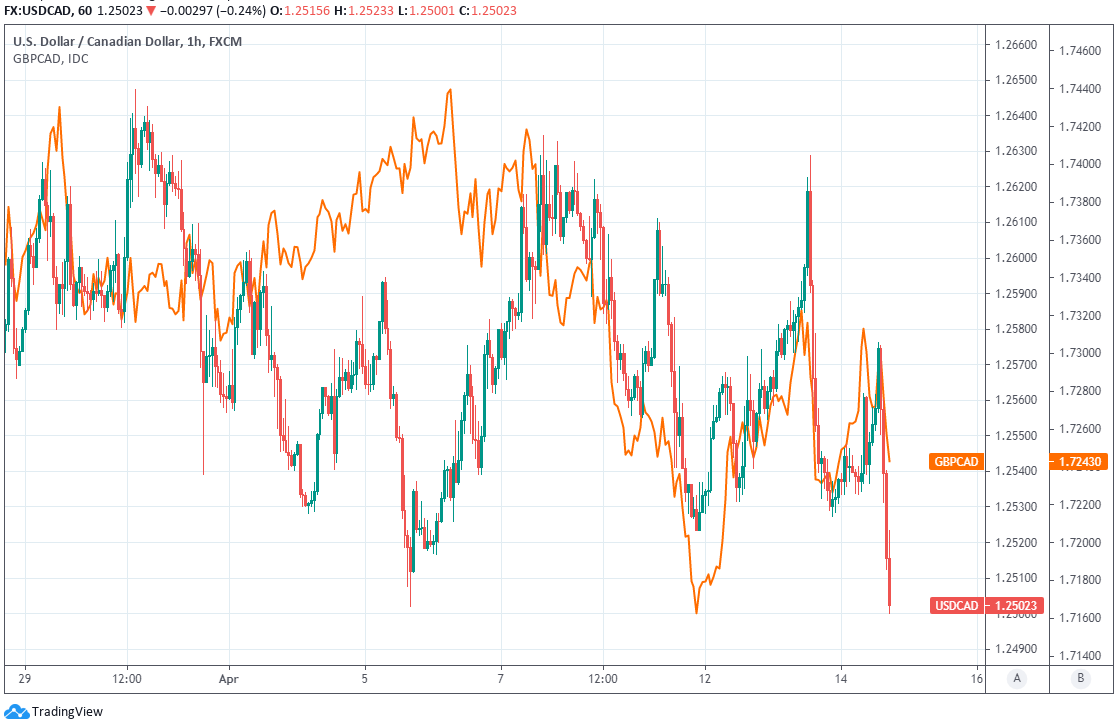 Above: USD/CAD rate shown at hourly intervals alongside GBP/CAD (orange).

Marino downgraded Credit Suisse's three-month USD/CAD forecast from 1.2550 to 1.2250 last week, citing a resilient economy as well as currency that offers a kind of best-of-both worlds exposure to the U.S. recovery as well as that still expected to be seen overseas.

This would be USD/CAD's lowest level and the Canadian Dollar's strongest since the final quarter of 2017, coinciding with 0.8163 for CAD/USD.

Canadian economic strength and resilience has been on full display in recent months with New Year figures having shown GDP rising when it was expected to fall while other data from Statistics Canada has shown consumer spending holding up under another wave of coronavirus infections and resulting restrictions much better than many feared.

The Canadian labour market has also shown its resilient side, with jobs continuing to be clawed back from the coronavirus through February and March to an extent where the economy had recovered around half of the jobs lost to the pandemic even before restrictions on activity among Canadian companies and households had been lifted.

All of this has enabled the Bank of Canada (BoC) to begin tentatively signalling an intention to further wind down its maiden quantitative easing programme, which will make the bank the holder of almost half Canada's outstanding stock of government debt if it continues until year-end.

"CAD’s interest rate advantage even against the USD in the crucial 2-year segment should remain intact, which all things equal is consistent with our constructive view on CAD," Marino writes in a recent research note. "With Canadian 10- year yields trading below the equivalent issues in US, Australia and New Zealand, we can see this reduction in balance sheet growth translating into longer-date interest rate differentials tightening in favour of CAD." 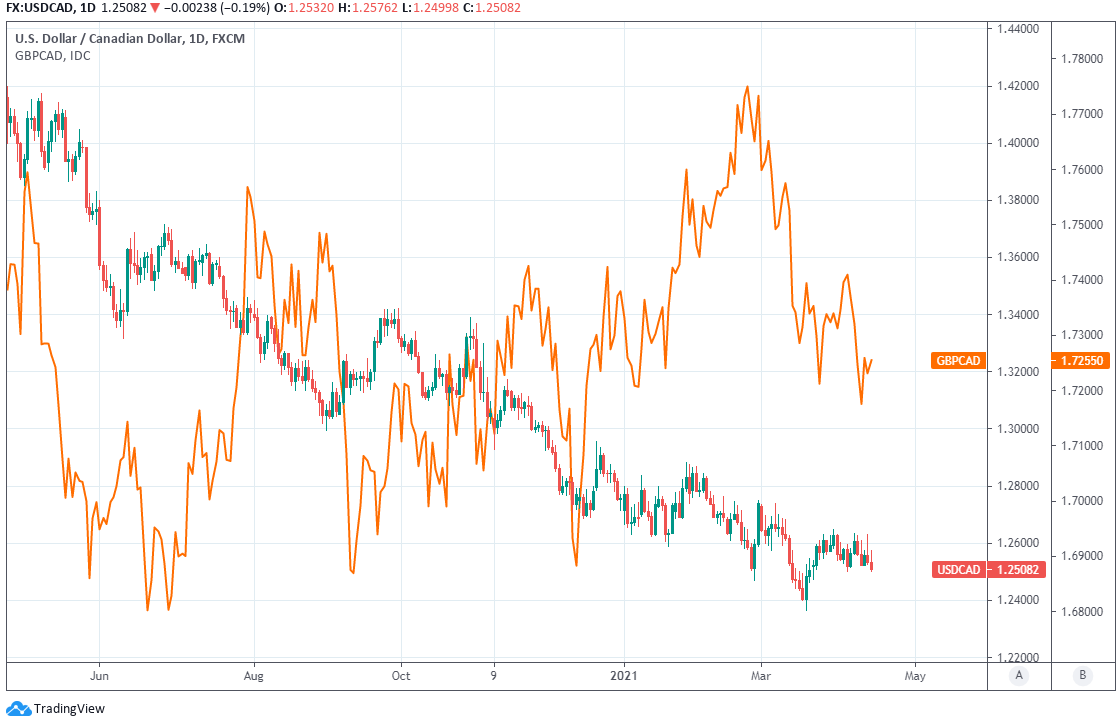 Above: USD/CAD rate shown at daily intervals alongside GBP/CAD (orange).

The BoC would then be injecting new stimulus into the economy at a lesser pace than it has done so far after the crisis, which may be positive for bond yields and the returns earned by investors holding the Canadian Dollar.

This already robust proposition is bolstered by Canada's location on the doorstep of the world's largest economy, which is expected to grow rapidly with the aid of unprecedented support from Washington and the Federal Reserve this year, and has helped the Loonie outperform other major currencies.

Canadian Dollar strength is a headwind for the Pound-to-Canadian Dollar rate, which tumbled last week as Sterling was also caught up in the same profit-taking that pulled the rug from under commodity currencies, though even more so and potentially due to its earlier outperformance.

Pound Sterling was the market's outperformer in February and early March but has since cooled its heels and been overtaken by both the Loonie and Norwegian Krone. Each is an oil-linked currency with a central bank that has recently been more 'hawkish' than the Bank of England (BoE).

"We think USD losses below 1.2505 should see spot move back to the low 1.24 zone," says Juan Manuel Herrera, a strategist at Scotiabank. "GBPCAD price signals are mixed; the cross is stuck within the recent trading range with support near 1.72 holding up GBP losses last week, even if the scale of the pound’s decline was rather significant, indicating that the 1.7445/50 area remains a major curb on the GBP’s upside potential. Short, medium and long-term trend signals are weak but all are aligned bearishly for the GBP, which suggests limited upside potential and ongoing pressure on the 1.7180/00 area." 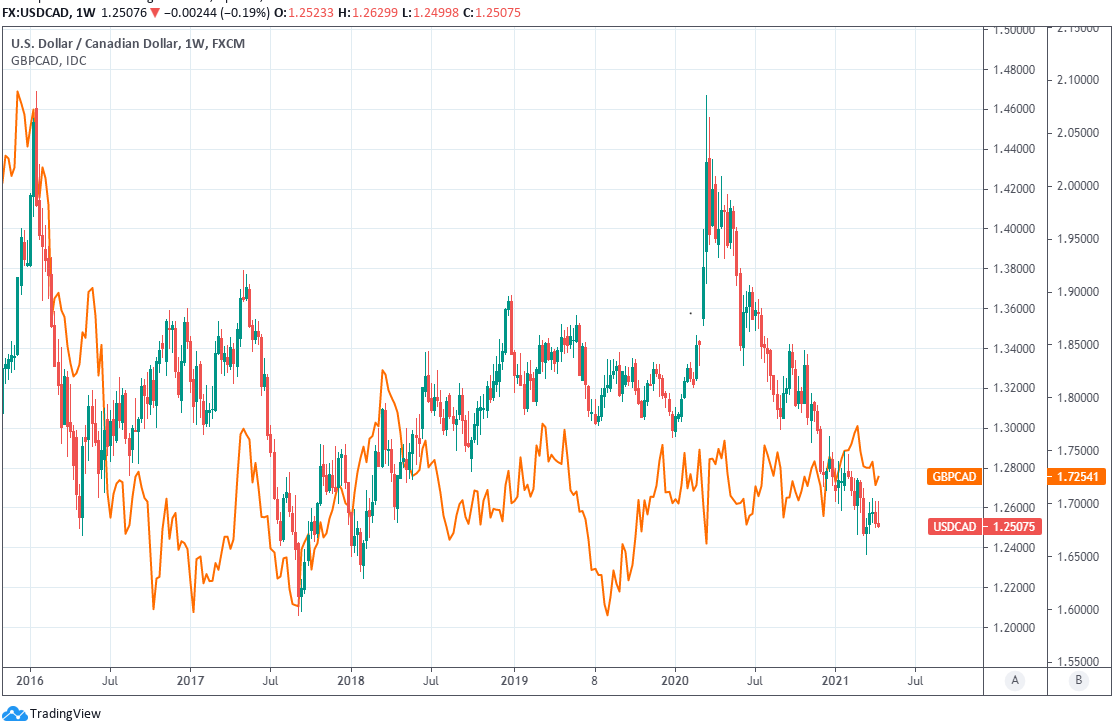 Above: USD/CAD rate shown at weekly intervals alongside GBP/CAD (orange).