- GBP/CAD in recovery mode but struggles to better 1.74.
- As CAD outperforms on oil, BoC & North American growth.
- While Europe's vaccine mire risks bogged down GBP/CAD.
- Narrow range offers support at 1.72, upside to around 1.74.

The Pound-to-Canadian Dollar exchange rate recovered off three-month lows to rise above its breakeven point for 2021 on Monday but with the Loonie poised to enjoy its own period of outperformance in the coming weeks, GBP/CAD upside may be limited over the coming days.

Pound Sterling entered the new week on its front foot with gains over all major currencies on Monday including a 0.70% increase against the Canadian Dollar that lifted GBP/CAD back into the black for 2021 as well as above 1.74.

Meanwhile, the Loonie was softer against the U.S. Dollar alongside oil prices after progress was made in attempts to free a container ship that had caused disruption of shipping through the Suez Canal, but it outperformed European currencies with the exception of Sterling.

"Spreads and commodity prices broadly remain at CAD-supportive levels and should continue to cushion the CAD against deeper losses. Note that while Canada is lagging behind the UK and US, Canadian vaccination efforts are stepping up and are edging ahead of major EU nations," says Shaun Osborne, chief FX strategist at Scotiabank. "We think USD losses below 1.2540 should trigger a little more technical weakness in the USD again." 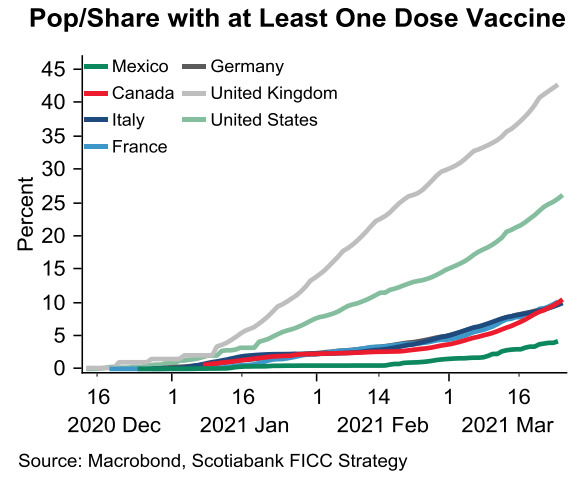 These include the newfound appeal of North American economic outlooks and asset prices to international investors, which are a recipe for Canadian Dollar outperformance and explain why despite its explosive start, GBP/CAD may struggle to extend far beyond 1.74 this week.

"The dramatic divergence of European and US growth expectations is a legacy of poor management on this side of the Atlantic and will leave scars in market pricing," says Kit Juckes, chief FX strategist at Societe Generale. "That gap needs to stop widening, at the very last, before it’s safe to sell the dollar again."

With Monday's oil price weakness aside the Canadian Dollar has scope to enjoy multiple tailwinds while Sterling runs the risk of being constrained or simply bogged down in a European vaccination mire that has left the old continent's growth outlook trailing that of North America. 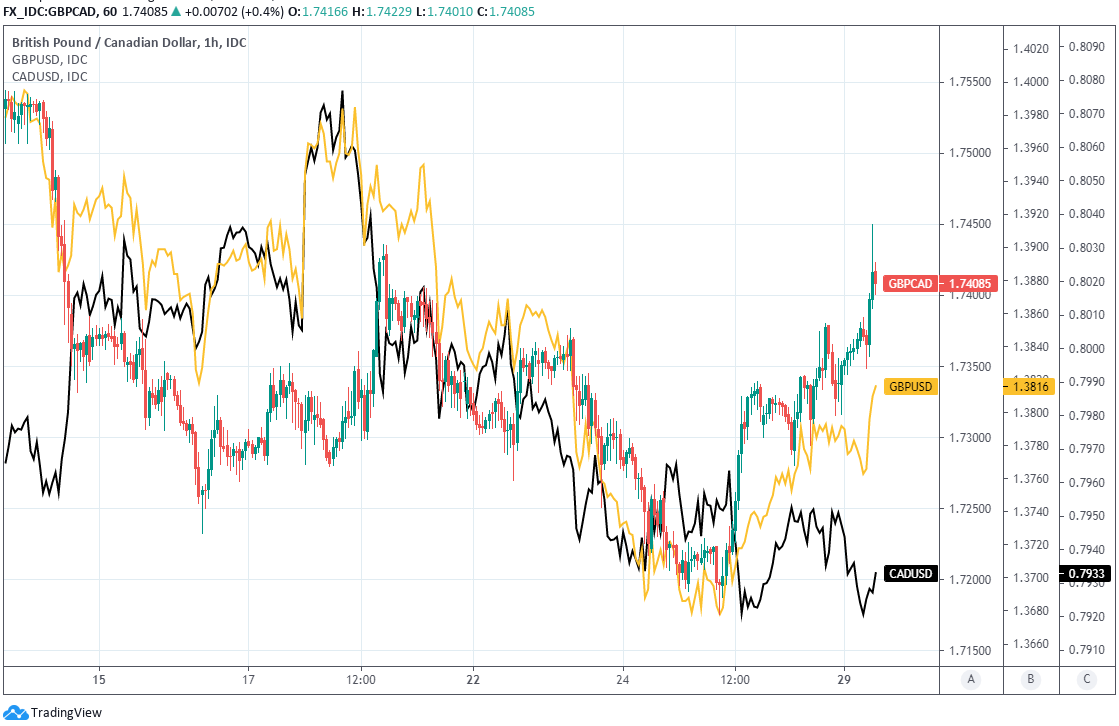 The net effect and implication of that could see the Pound-Canadian Dollar rate trading a relatively tight range between 1.72 and just north of 1.74 this week.

GBP/CAD has recently found strong support on weakness toward 1.72 but would struggle to sustain a move above 1.74 if as GBP/USD recovers toward 1.39 or even 1.40 over the coming days, USD/CAD declines back toward 1.25 ahead of a return to its current multi-year lows around 1.24.

The Loonie has more than just a commodity tinged feather in its cap however, now the North American region is increasingly favoured by investors as the year's economic growth hotspot for the developed world. This is a potential boon for the Canadian currency even without the Bank of Canada (BoC) and its evolving monetary policy stance.

"The CAD has, in our view, lagged the move higher in oil prices seen thus far in 2020, meaning there is further room for catch up in the currency. BoC taper talk stands in very stark contrast with the ECB’s aggressive pickup in bond purchases," says Brian Daingerfeld, head of G10 FX strategy US at Natwest Markets, who's a seller of EUR/CAD.

Canada's economic outlook benefits from the country's close proximity to the stimulus-pumped U.S. economy which is also now host to one of the fastest vaccination programmes in the developed world and is increasingly currying favour with investors and a once-bearish market for U.S. Dollars. 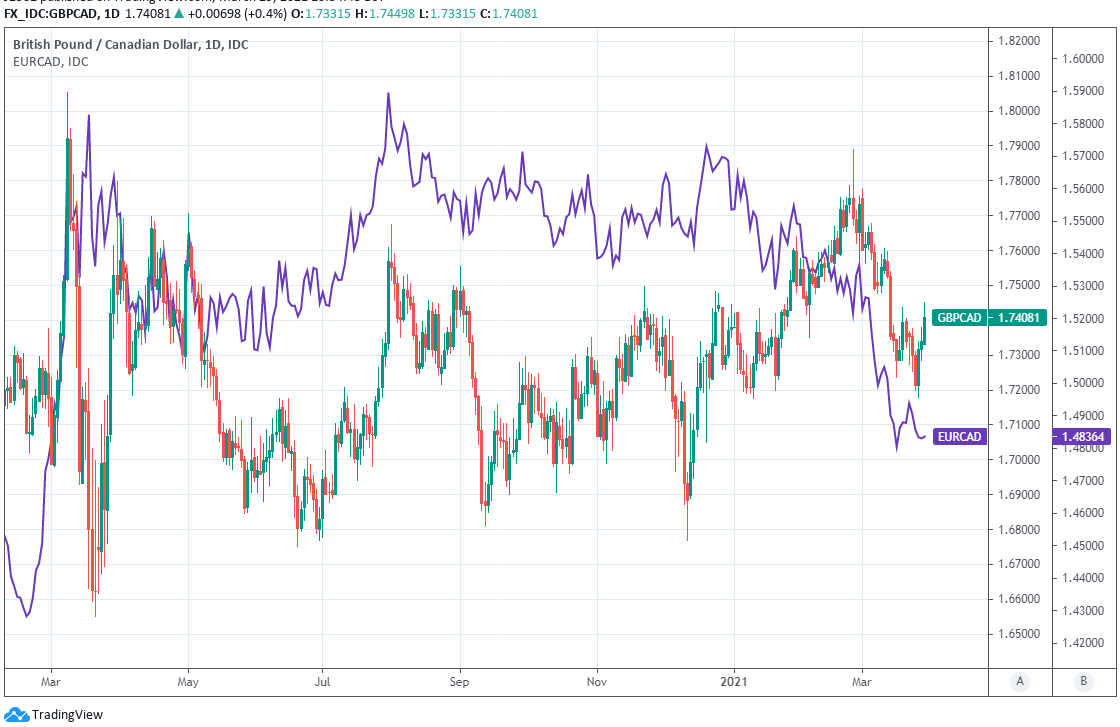 This has led to frequent bursts of widespread strength in U.S. Dollar exchange rates and is elevating the importance of American economic data for day-to-day price action, which means this week's Institute of Supply Management manufacturing survey and U.S. payrolls report could be a key determinant of Canadian Dollar perfomance too.

Multiple connected instances of U.S. and Canadian Dollar strength have helped put GBP/CAD under pressure in recent weeks although the greatest ongoing risks to Sterling is now arguably the pending and potentially quite supportive turn in the monetary policy stance of Bank of Canada.

"The BoC was the most aggressive of the G10 central banks in expanding its balance sheet through the crisis last year," says Lee Hardman, a currency analyst at MUFG. "Gravelle's speech now makes it highly likely this process of tapering will begin in April. Assuming no major further correction in crude oil prices and assuming the data continues to confirm recovery (very likely), we expect CAD to continue to outperform other G10 currencies."

This was after BoC affirmed its place in the running to become the first major central bank to curtail a coronavirus-inspired quantitative easing programme (QE) when Deputy Governor Gravelle suggested a cut to weekly purchases could come as soon as April; a potential recipe for Canadian outperformance.

The BoC would hold more than 50% of Canadian government bonds at year-end if it continues buying at its current pace of "at least C$4 bn per week," until then, which is an amount that would risk seeing the bank having an adverse impact on the orderly and effective functioning of the market. 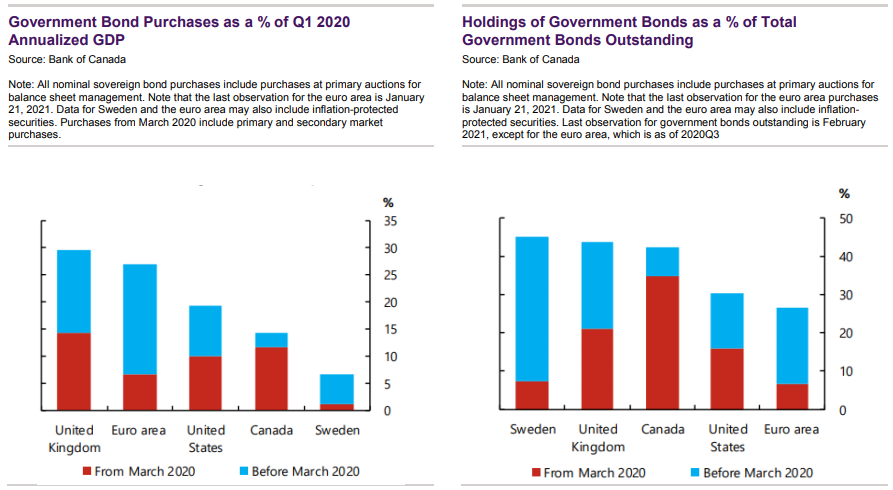 As a result the Bank of Canada could have little choice but to end its QE programme some time before year-end whereas, and for comparative purposes, the Bank of England is set to purchase the last amount outstanding against its £895bn (C$1.5 trillion) target around year-end 2021.

"Notably, that decision (if taken in April) would represent a decoupling with the Fed," says Natwest's Daingerfeld. "Fed Chair Powell said at his FOMC press briefing last week that it is “not yet” to begin even discussing the possibility of tapering, while Gravelle is openly discussing the trajectory and signaling."

Gravelle also indicated the BoC may be more "mindful of the possibility that our stimulative monetary policy—while essential to achieving our inflation objective—could increase financial vulnerabilities," suggesting a possible creeping conditionality to its policy bent that would do little to discourage investors from the idea the BoC could lift the cash rate sooner than previously telegraphed. This is supportive of Loonie and a headwind for GBP/CAD as well as other European currencies relative to the Canadian Dollar.

"We think this should provide the CAD with a supportive tailwind," says Ned Rumpeltin, European head of FX strategy at TD Securities. "We think USDCAD would be one of the better places to sell dollars if we do get a broader pullback in its latest rebound. This also leaves us focused to look for CAD to outperform on some crosses. We took profit on our EURCAD short last week after a sharp move lower, but we think the medium-term outlook continues to favour additional downside towards the 1.47 level."

Natwest Markets and TD Securities anticipate declines in USD/CAD over the coming weeks and both advocated last week that clients sell EUR/CAD, which would fall heavily in response to any simultaneous declines in USD/CAD and EUR/USD. This is also the case for GBP/CAD with GBP/USD, although unlike with the Euro exchange rate, Sterling is expected to advance against the U.S. Dollar which could help keep the Pound-Canadian Dollar rate from any meaningful declines in the months ahead . 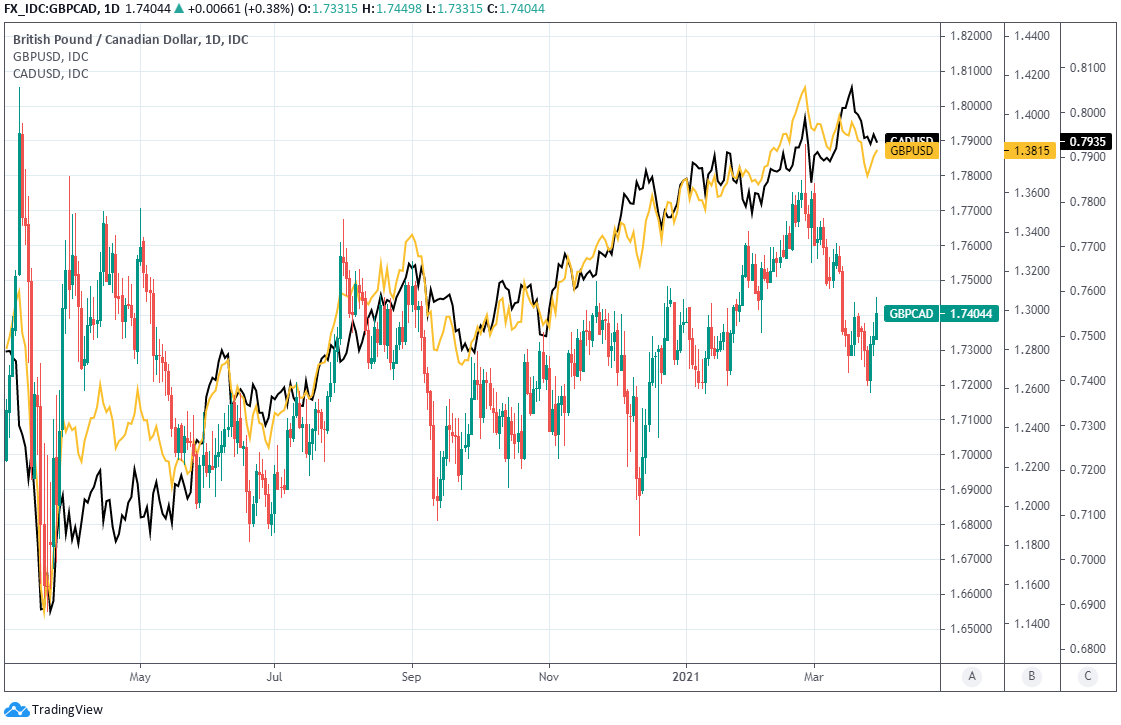