The Pound-to-Canadian Dollar exchange rate has established a foothold around the midpoint of its 2020 range although a tendency toward underperformance in both Sterling and the Loonie is encouraging a continued narrow range trade.

Sterling ended a three week winning streak when it closed -0.58% at 1.7063 against the Loonie Friday after having trodden a narrow, sideways path.

The Pound was the worst performing major currency after notching up losses to all G10 rivals while the Canadian Dollar ceded ground to just more than half its counterparts, with that lesser weakness explaining GBP/CAD's fall.

"While the Canadian economy appears to be gradually recovering, concerns about a possible second wave are dampening optimism on the currency markets. At the same time, there are countries that have not yet got the coronavirus under control. Against this backdrop, the CAD is likely to continue to trend sideways for the time being. In the medium term, once the corona crisis has been overcome, we see appreciation potential for the CAD," says You-Na Park-Heger, an analyst at Commerzbank.

The Pound-to-Canadian Dollar rate always reflects an amalgamation of price action in GBP/USD and USD/CAD and with these two exchange rates continuing to tread narrow sideways ranges, GBP/CAD could find itself confined to a 1.6986-to-1.7162 range in the coming days. 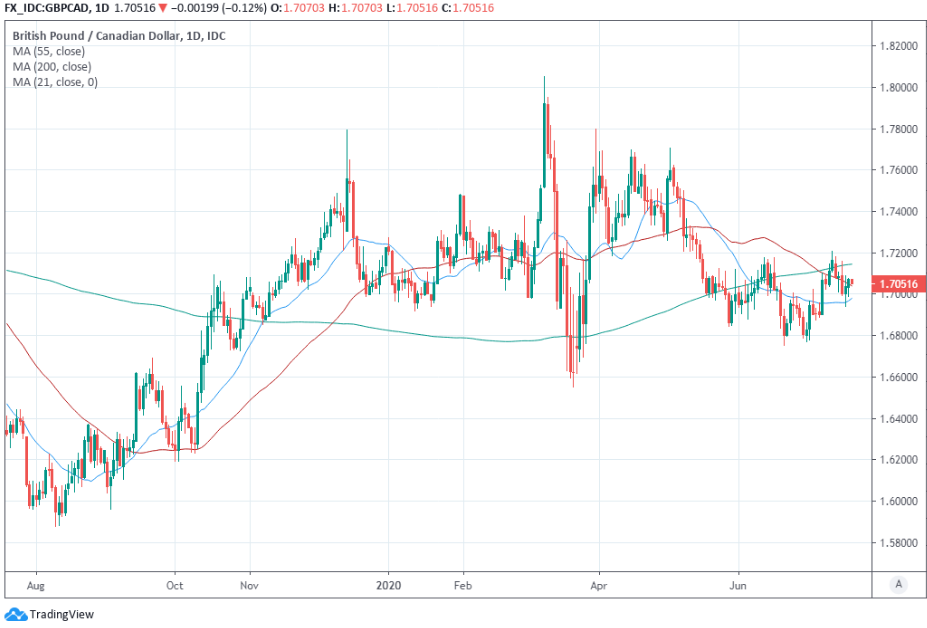 "Global risk sentiment, oil and US virus cases will remain centre stage for the loonie. On the latter, we suspect that increasingly worrying news on US virus cases can still put a lid on CAD due to Canada’s high exposure to US lockdowns/slower economic recovery," says Francesco Pesole, a strategist at ING, who looks for USD/CAD to trade within a 1.35-to-1.3650 range this week and for it to be found trading around 1.35 in one month's time.

A USD/CAD that trades between 1.35 and 1.37 would produce a Pound-to-Canadian Dollar rate of between 1.6986 and 1.7162 if GBP/USD remains range-bound between 1.24 and 1.27 this week, although such a scenario assumes that both currencies follow the ebb and flow of risk appetite reflected by rising and falling stock markets. Any sudden and unique weakness or strength in either could be enough to push GBP/CAD outside of that range.

"USD-CAD will initially trade sideways at current levels of around 1.35," says Park-Heger, who looks for a GBP/CAD rate of 1.6740 by September and 1.7421 by year-end. "The corona pandemic has hit the country comparatively mildly. Of course, Canada will feel the economic consequences, but the country should emerge from recession fairly quickly. Against this backdrop, further monetary easing measures should not be necessary, and currently we do not think that a further interest rate cut is very likely. In addition, oil prices should recover to some extent in the course of the next few quarters. This should support the CAD."

Canada's Dollar is increasingly seen as having been held back by its proximity to the U.S. and the second wave of coronavirus infections that's threatening to drive America's total case number above 4 million in the week ahead. 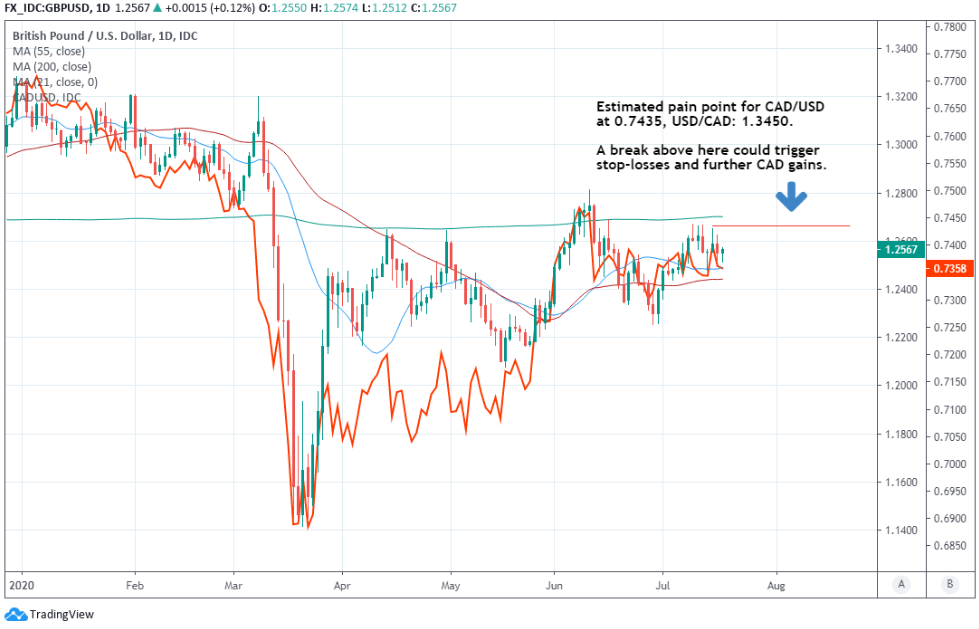 Above: GBP/USD shown at daily intervals with CAD/USD (orange line) and estimated pain point for CAD/USD.

A worsening of the U.S. outbreak or further attempts to reverse the economic reopening might encourage further underperformance in the Loonie and a possible push above the 1.7162 range top for GBP/CAD this week.

Canadian retail sales and inflation data for June are out on Tuesday and Wednesday but ING's Pesole says they're unlikely to impact on the Loonie.

“GBPUSD remains range bound but spot has been pressing up against well-defined trend resistance at 1.2641 whilst finding support against the 40-day MA in July which suggests some underlying strength in the market at this point. Recall that weekly price signals are more GBP-supportive after the late June/early July rebound from the low 1.23 area. Support here remains crucial for the GBP, with price action since the March low taking on the form of a possible—albeit somewhat extended—Head & Shoulders pattern,” says Juan Manuel Herrera, a strategist at Scotiabank. “We still rather think a move above 1.28 or below 1.23 is needed to inject a little more dynamism in this market. We are leaning towards a topside break but with not too much conviction.”

Pound Sterling has been weighed down in recent weeks by a comparatively more dire economic situation in the UK, an absence of progress in Brexit trade talks as well as the Bank of England (BoE) and its ongoing contemplation of negative interest rates as a policy tool. All three of those subjects will be back in focus this week with BoE rate setter Silvana Tenreyro and chief economist Andy Haldane set to appear before parliament Monday ahead of an update from Brexit negotiators and economic data.

If this week's potential headwinds lead GBP/USD to decouple from other major U.S.-facing exchange rates then Sterling could find itself falling below the 1.6986 bottom of this week's anticipated range, although the Pound-to-Canadian Dollar rate benefits from strong technical support around 1.68. 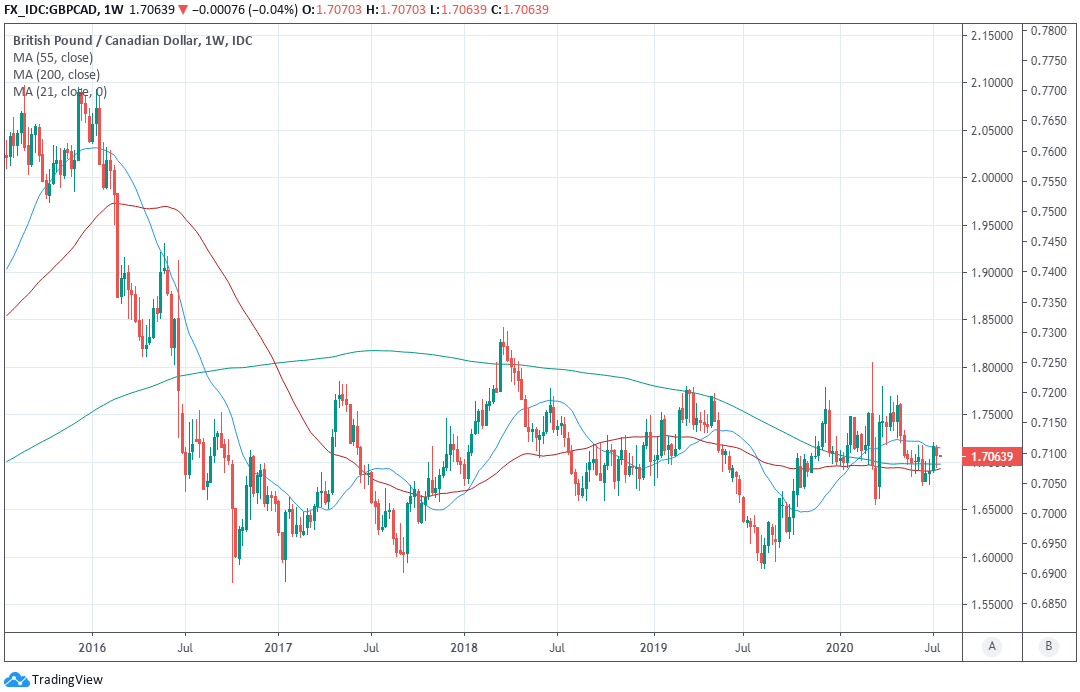