The Pound-to-Canadian Dollar rate has risen for three consecutive weeks and could cement its grip on the recently recovered 1.70 handle in the coming days if weakness in the Loonie and Sterling's indifference to an absence of progress in the Brexit negotiations persists.

The Pound-to-Canadin Dollar pair is one of the few exchange rates where domestic fundamentals can occasionally matter, given similar sensitivities to the stock markets that have driven non-safe-haven currencies to an uncanny degree in recent months, while with many others they've fallen by the wayside since the coronavirus came along.

Until late June the Pound's already weak and Brexit-blighted fundamentals had trumped Canada's exposure to North American oil prices that might not fully or sustainably recover their losses for some time, and served to drag the Pound-to-Canadian Dollar rate lower since early May.

But GBP/CAD found strong support just below 1.68 in late June and has since recovered its footing above the 1.70 handle in tandem with a second wave of coronavirus infections that began sweeping across the U.S., Canada's next door neighbour, around then. Sterling could look to cement its grip on the latter level this week, although there's a risk that the trading range will be stiflingly narrow.

"The flare-up in Covid-19 cases in the US has likely taken away some attractiveness from CAD due to the large exposure of Canada to new lockdown measures/prolonged economic strains in the US," says Francesco Pesole, a strategist at ING. "Away from the BoC meeting, another good week for sentiment and a leg higher in oil prices may help CAD recover some ground to it risk-sensitive peers next week." 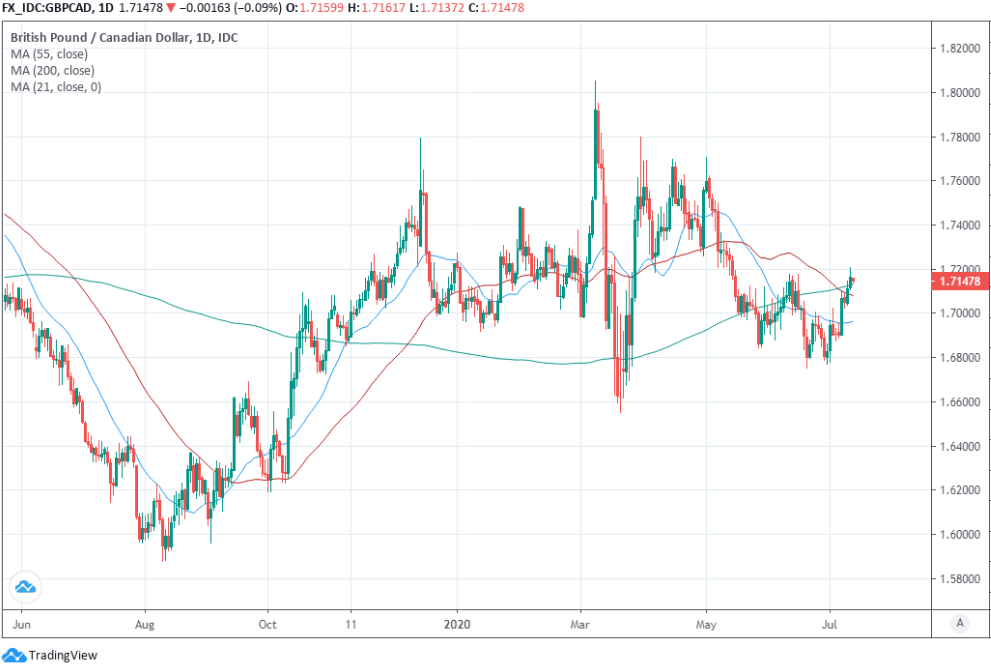 Above: Pound-to-Canadian Dollar rate shown at daily intervals with 21, 55 and 200-day moving-averages.

The Pound-to-Canadian Dollar rate is effectively an amalgamation of USD/CAD and GBP/USD so is driven by relative price action in those two exchange rates, although while the latter has risen throughout July, the USD/CAD rate has pared back around half its earlier fall resulting in continued GBP/CAD gains.

GBP/USD is at an inflection point from which it could continue higher or turn lower but with USD/CAD resisting the downside even as Sterling climbs against the U.S. Dollar, while rising faster than GBP/USD falls during bouts of risk aversion, the Pound-to-Canadian Dollar rate could cement its grip on the 1.70 handle in the week ahead even if it does cede back to the Loonie the 200-day moving-average at 1.7131 that was only just reclaimed on Friday.

"The CAD continues to frustrate our expectation of some modest gains on the USD, ending the week with a slight loss (at writing) and failing to build on the previous week’s nudge up. This is all a bit disappointing; there are clear grounds for the CAD to pick up a little, in our opinion. Commodity prices and terms of trade have moved more supportively for the CAD in the past few weeks. Data surprises are edging generally in the CAD’s favour and today’s Canadian jobs report was solid," says Shaun Osborne, chief FX strategist at Scotiabank. "Unfortunately, fundamentals matter little – or a lot less – while FX markets remain fixated on the daily swings in risk sentiment. Our correlation matrix shows that the CAD remains highly correlated with US equity markets – at nearly +90% on a rolling 22-day window study of daily returns."

The Pound took back the 200-day average Friday in spite of a strong performance from Canada's job market being revealed for June, indicating a possible bias toward underperformance for the Loonie whatever the domestic weather. To the extent that this is the case for the Loonie, the S&P 500 performance could be double important this week, which will see the second-quarter earnings season getting underway and with investors focused keenly on reports coming out of America's banking sector. 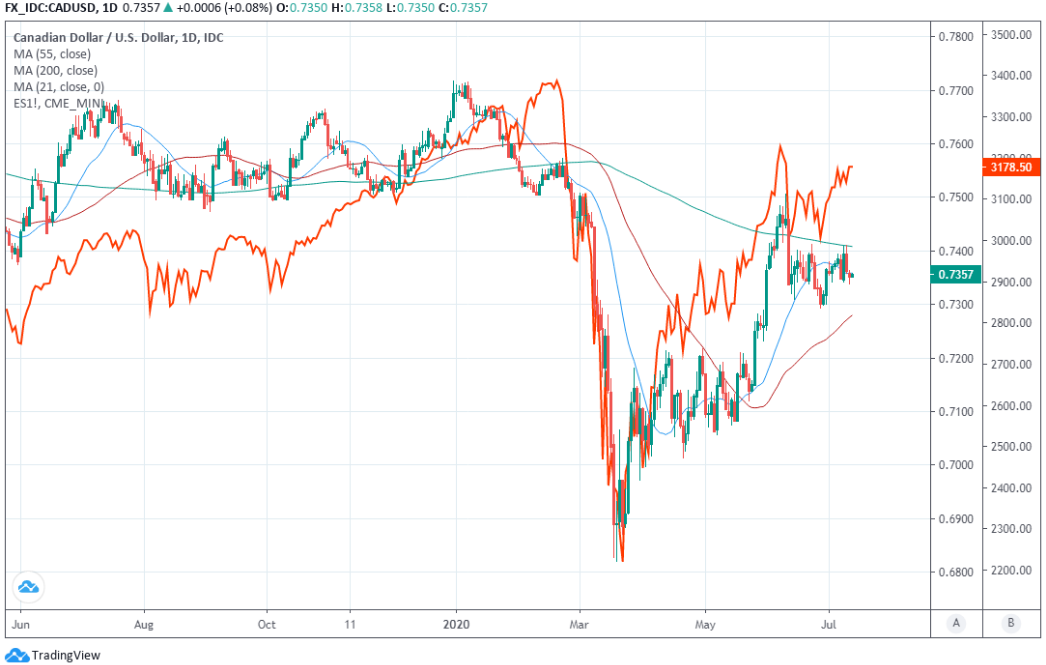 Banks have unique insight into the wellbeing of businesses and households so earnings reports and guidance given in them could either vindicate or rebuke those investors who're betting on a v-shaped economic recovery, with implications for stock markets and all currencies. The Loonie might have catch-up potential in the event of another strong performance from the S&P 500, which would weigh on the Pound-to-Canadian Dollar rate and vice versa.

"We may be entering a fairly quiet phase as far as sterling's idiosyncratic risks are concerned. This leaves us looking for the pound to trade largely in step with the EUR and other major G10 currencies," says James Rossiter, head of global macro strategy at TD Securities. "The "dollar bloc" (AUD, NZD, & CAD) is better placed as a relative risk barometer than the GBP is likely to prove. Here, we note that while cable has had a decent correlation to global equities in recent months, its beta to these developments is relatively subdued. Unless the structure of these relationships change over the next several weeks, we do not expect GBP to exhibit a large degree of FX market leadership."

The Pound-to-Canadian Dollar rate has turned higher in tandem with the U.S. second wave of coronavirus but also a desensitisation of Sterling to the absence of progress in the Brexit talks and ongoing rhetoric of leaders on both sides that has continued to suggest some form of 'no deal' Brexit is possible. The talks are at a crucial stage but with weeks left to go in the "accelerated" stage and another five months on the clock until the transition period is set to end.

Beyond the influence of stock markets and corporate earnings, the Pound-to-Canadian Dollar rate could find itself momentarily influenced by economic data releases from the UK and Wednesday's Bank of Canada (BoC) interest rate decision, which will be the first under new governor Tiff Macklem. 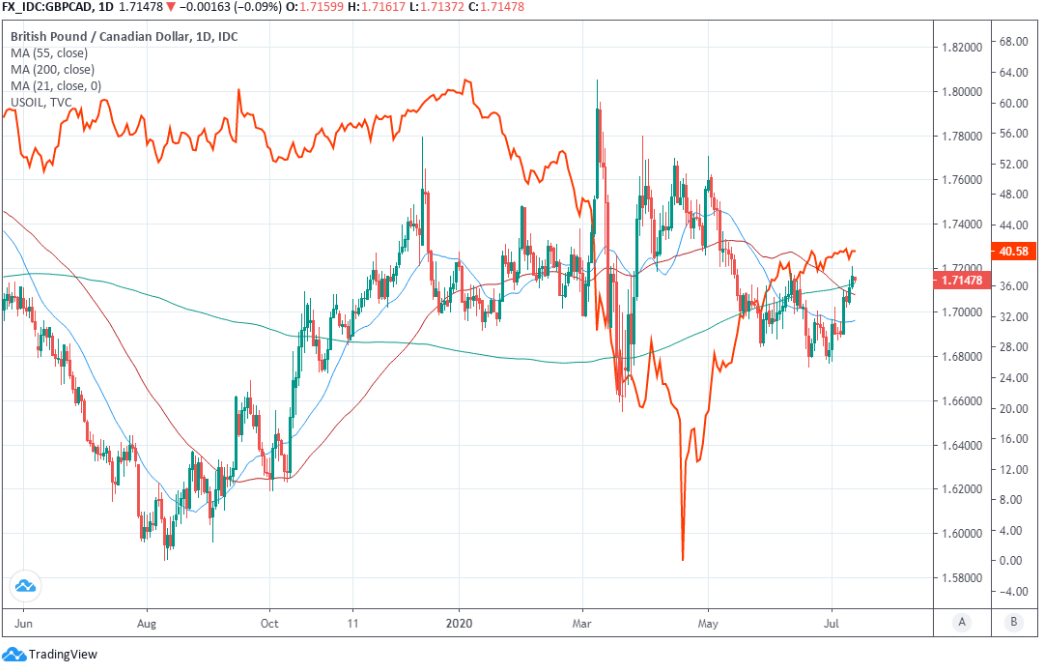 There aren't any expectations of a policy change at Wednesday's 15:00  meeting given that it's the new governor's first meeting although it could still inspire a response in the Loonie if Macklem indicates that either more or less policy support is in the pipeline for the months ahead.

Investors will watch and listen closely for clues on if and when the BoC's bond buying programme will be extended so that it can purchase more than the C$50bn of federal and provincial government bonds.

"The BoC probably won't have a significant impact next week. Still, a cautious tone on the outlook would reinforce the recent lows in USDCAD, implying a push back towards 1.37-1.39 in the weeks ahead. That's also consistent with the implied level from the growth and risk framework," says Andrew Kelvin, chief Canada strategist at TD.

Consensus looks for a 5% GDP rebound to follow April's -20.4% decline when the data is released at 07:00 on Tuesday, covering the UK's second month of full 'lockdown'. At the same time on Thursday, investors will look to see if any of the estimated 1.5 million new welfare claims made since the national shutdown began in March have shown up in the official unemployment rate, which has fallen from 4% to 3.9% since then.

Given their implications for global risk appetite, Thursday's Chinese second quarter GDP data and June's U.S. retail sales number might also have an impact on the Pound-to-Canadian Dollar rate, though the kind where bad news lifts Sterling while good numbers aid the Loonie. Chinese GDP figures might be meaningful given how rip-roaring asian stock markets supported sentiment last week, and consensus is looking for an annualised 2.2% rebound from the -6.8% contraction seen in the first quarter. U.S. retail sales are seen rising by 4.6% after a 17.7% increase in May, which would leave total sales down by just a fraction for 2020 and be a bullish sign for the economic outlook. 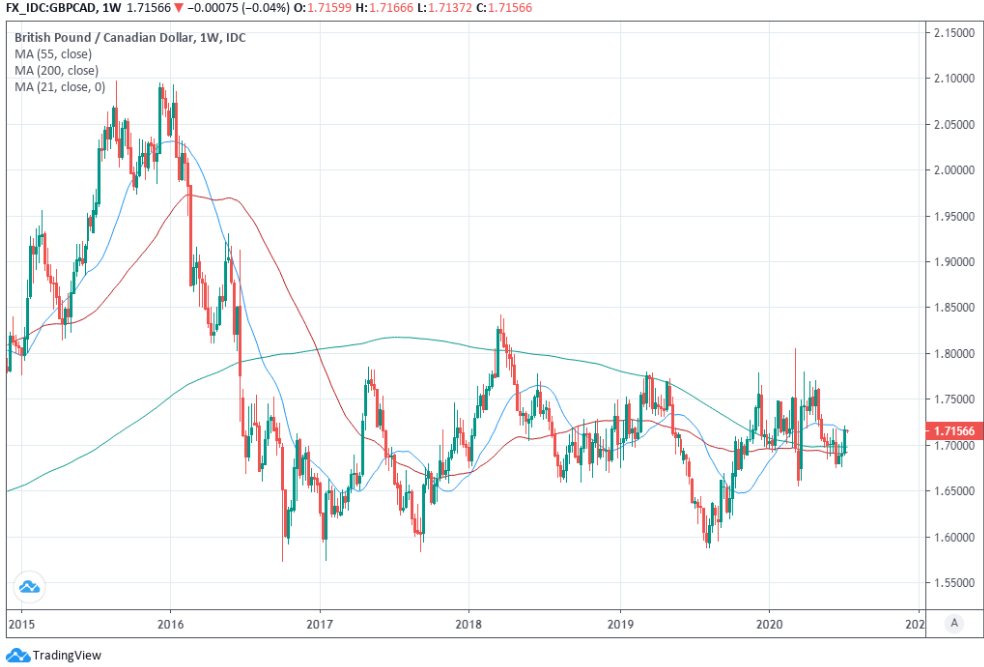