The Pound-to-Dollar recovery from late June lows built further last week but the outlook is hinged on whether Sterling can overcome a cluster of nearby technical resistance levels, which itself depends on the market response to key U.S. corporate earnings figures.

Pound Sterling was the second best performing major currency last week after remaining deaf to the deadlocked Brexit trade talks and taking cues instead from investors' glass-half-full view of the global economic outlook, which has so-far survived the second wave of coronavirus infections in the U.S.

Upbeat sentiment was best evidenced by the 2% gain of the S&P 500 that built even as the U.S. repeatedly set fresh records for new infections, enabling the Pound-to-Dollar rate to rise 1.14% for the week. But gains have brought Sterling into contact with technical resistance levels that could now act as roadblocks.

The 200-day moving-average was sitting around 1.2698 on Friday and has blocked Sterling's path higher on two occasions since the late March sell-off. Only once has the formidable average of prices been breached and even then the move was not sustained.

Pound Sterling crossed over the 200-day average in late June but fell back below over the next three days after an intervening rally brought the British currency into contact with the 78.6% Fibonacci retracement of the March downtrend that succesfully rejected the first test.

Rudolph and the Commerzbank team are betting that all of these levels will eventually be overcome but intend to exit their bet on a rising Pound-to-Dollar rate when it reaches 1.28, which is just beneath the above referenced 78.6% Fibonacci retracement at 1.2823. 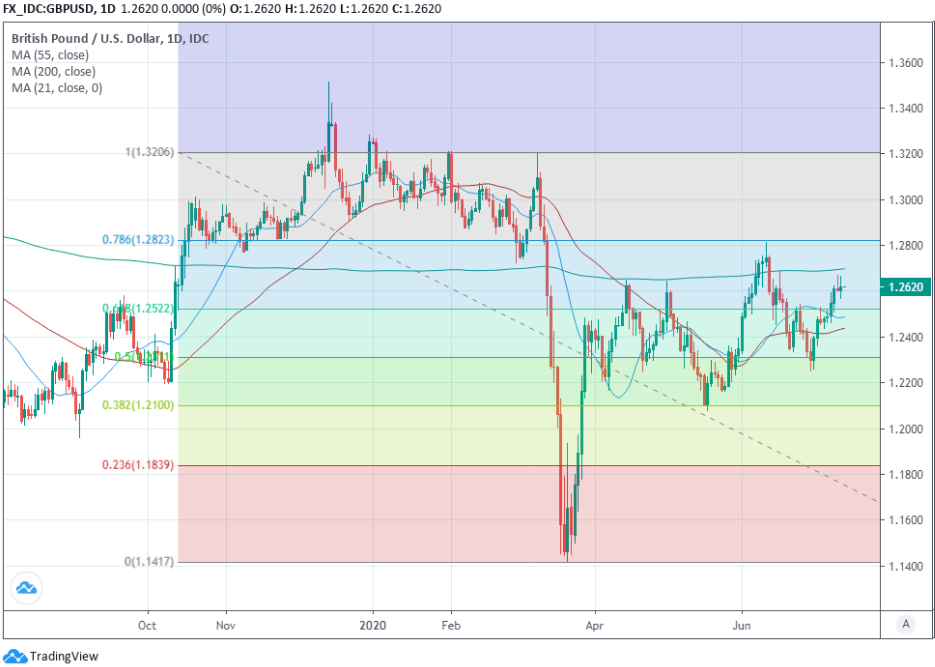 "Potential trend resistance above the market at 1.2677 is no more than that at this point so key resistance which is definable stands at 1.2810. We think the GBP may nudge a little higher in the short run but we think a break above 1.28 or below 1.23 in effect is needed to give a little more directional intent to this market," says Juan Manuel Herrera, a strategist at Scotiabank.

"Serious divergences" remained between the two sides in the Brexit trade talks last week but Sterling still closed higher against all major rivals other than Sweden's Krona in another demonstration of the Pound 's newfound desensitisation to developments in the long-running saga.

"Johnson had made a solemn promise before that the UK would leave the EU at the end of October last year. Almost at the last second, he then requested that the date of withdrawal be postponed until the end of January after all. It is therefore not unreasonable to assume that the government merely wants to exert pressure on the EU, but would finally give in again if no agreement were to be reached," says Thu Lan Nguyen, a Commerzbank colleague of Rudolph's.

Prime Minister Boris Johnson and EU counterparts have purported on multiple occasions in recent weeks to be a bit more open to the idea of a 'no deal' Brexit from the transition period at year-end, but with months more left to go in the negotiations, Sterling has so-far overlooked the comments. Accelerated talks will continue until the end of July but even then the two sides will still have until year-end to either reach an agreement or extend the transition into 2021.

This could mean that for the time being at least, Sterling remains a slave to the sentiments that are best reflected by moves in the stock markets as well as the ever evolving economic picture. That would mean this week's U.S. corporate earnings figures will be an important influence on price action in the Pound. 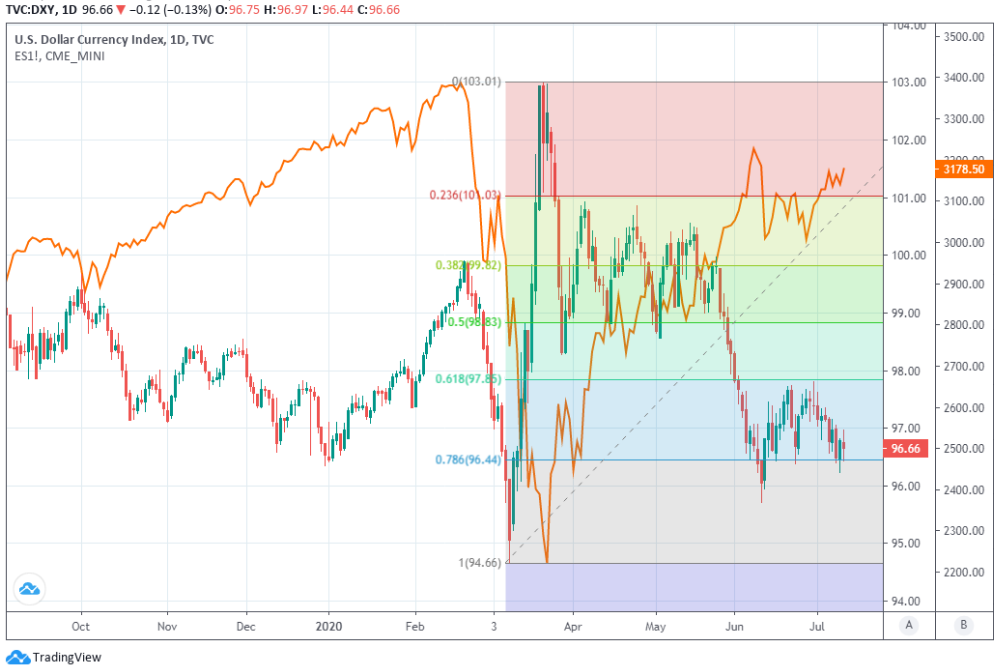 "Our Analysts Recommendations tracker shows the Street is bullish, except on Wells Fargo which is in a different part of the cycle as it rebuilds. There is a definite sense that banks may have been sold off too quickly and that they are much better positioned to deal with this crisis than investors have given them credit for," says Mark Wilson, chief market analyst at Markets.com. "Big banks have underperformed the broader market this year and could be due a bounce."

J.P. Morgan, Citi, Wells Fargo, Goldman Sachs, Bank of America and Morgan Stanley are among the many big names who're set to report second quarter earnings from Tuesday onward this week, and given many of them have unique insight into the wellbeing of businesses and households, investors will be listening keenly for clues on whether they've been right to bet that a so-called v-shaped recovery will be quickly forged in the fires of the coronavirus crisis.

"Significantly higher provisioning for souring loans or a lowering in guidance (although only 49 of the S&P 500 companies currently provide guidance!) stand to insert more equity volatility into the equation. One final point, 15 July marks the new US federal tax deadline, having been extended from 15 April back in March. This may see tight USD cash and repo markets and slightly firmer short-end USD rates, proving a temporary bullish dollar factor," says Petr Krpata, chief EMEA strategist for FX and bonds at ING.

Bank stocks have underperformed other sectors thus far in the recovery and if investors were wrong to give them a wide berth then second quarter earnings numbers would likely indicate that this week, potentially lifting both the stock markets and Pound-to-Dollar rate

Such an outcome might be enough to get Sterling above the 200-day moving average for a second time in as many months, but if this week's updates were to warn of a more protracted recovery then the Pound's July correction higher could evapourate before investors' eyes.

The Pound might also take some limited instruction from UK GDP data for May that's due out on Tuesday, as well as inflation and employment statistics due on Wednesday and Thursday. U.S. and Chinese figures will be important too. 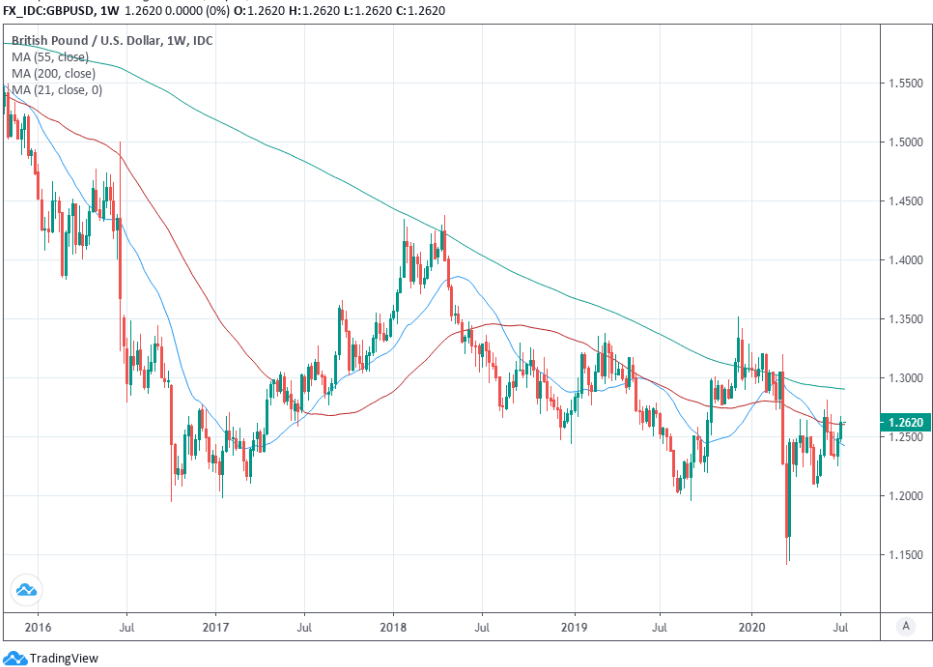 "The jump in May data will mostly be mechanical. We are a bit more optimistic than consensus at 7.2% m-o-m," says Sanjay Raja, an economist at Deutsche Bank. "The main driving force behind our projection is an expected spike in manufacturing and construction output, with the latter supported by a restart of private repairs and maintenance projects (particularly as Brits embrace DIY). More retail spending should also see services activity growth move back into positive territory. Don’t confuse the expected rise in May output as the start of a V-shaped rebound. In fact, we continue to think the economic recovery will be unbalanced and choppy at best."

Consensus looks for a 5% GDP rebound to follow April's -20.4% decline when the data is released at 07:00 on Tuesday, covering the UK's second month of full 'lockdown'. Wednesday's 07:00 inflation number is seen steady at 0.5% while at the same time on Thursday, investors will look to see if any of the estimated 1.5 million new welfare claims made since the national shutdown began in March have shown up in the official unemployment rate, which has fallen from 4% to 3.9% since then.

"We look for a further rise in unemployment in coming months following already announced job cuts and as more firms announce layoffs. None of these data points should have a meaningful impact on GBP given their backward-looking nature," says ING's Krpata.

Given their implications for global risk appetite, Thursday's Chinese second quarter GDP data and June's U.S. retail sales number might have a more longer-lived impact on Sterling than the domestic data. Chinese GDP figures might be meaningful to the markets given how rip-roaring asian stock markets were able to support sentiment last week. Consensus is looking for an annualised 2.2% rebound from the -6.8% contraction seen in the first quarter.

The highlight of the agenda is arguably U.S. retail sales for June, which consensus sees rising by 4.6% after a 17.7% increase in May. That would leave total sales down by just a handful of percentage points and be a bullish sign for the stock markets as well as Pound Sterling.

"It’s early and the softness could intensify, but the available data suggest that the recovery has not derailed," says Michael Moran, chief economist at Daiwa Capital Markets. "Some red-hot areas in May are likely to cool (building materials, food, sporting goods), but further rebounds from virus-led retrenchment in March and April should lift most components of retail sales."