- Canadian employment data beats expectations
- But, the rebound is tipped to slow by economists
- "low hanging fruit" has already been picked
- GBP/CAD at a pivotal level

The data released beats expectation for employment to grow by 700K and suggests the economy could recover from the covid crisis faster than economists anticipate, however there is much more to do given the unemployment rate stands at 12.3%.

The Canadian Dollar's immediate reaction to the data release was to decline, but it has since recovered some lost ground suggesting markets are not convinced there is enough in the data to prompt the Bank of Canada to shift policy.

Responding to the numbers, an economist at one of Canada's leading lenders suggests June's strong rebound is unlikely to be repeated in coming months, underlining the challenges the economy still faces and underscoring the CAD's lacklustre reacion to the data.

"In line with the economic reopening across the nation, labour markets moved into a higher gear in June, pulling many Canadians back to work," says Royce Mendes at CIBC Capital Markets in Toronto. "The level of employment is 1.8mn jobs below the peak in February, and June will likely represent the high-water mark for monthly gains."

"The easing of restrictions, which led to a visible increase in activity, allowed many Canadians to resume jobs that had involved physical interactions. However, that was low-hanging fruit in terms of a recovery. While restrictions continue to be relaxed, it's not happening at the same pace. Furthermore, given international experience, there seems to be a clear limit on the extent to which the economy can reopen without a resurgence in the virus," adds Mendes.

In the wake of the numbers the Pound-to-Canadian Dollar has extended its July recovery sequence by going higher to 1.7138, its highest level since June 16. But, we could well see Sterling fall back if resistance located around 1.7175 forces buyers to capitulate as was the case in mid-June: 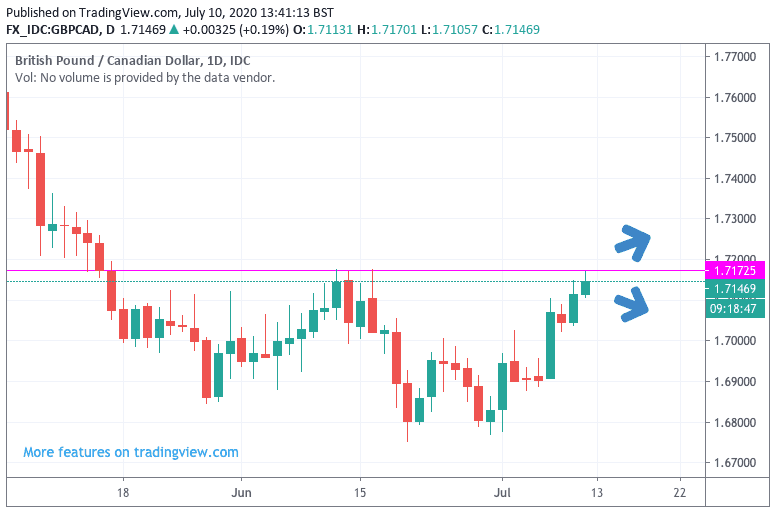 As can be seen in the above, the market could see increased supply in the area of 1.7138 which could prompt a capitulation by the Pound and lead to a withdrawal back into the 1.68-1.7159 range.

However, a break above this resistance point could open the door to a quicker run higher that will ultimately allow Sterling to recapture the ground it lost in the May-June period and we would suggest the 1.77 area of resistance becomes a level the bulls would look to target.

Much will of course depend on how senitment towards Sterling evolves over coming days, with another round of EU-UK trade negotiations next week likely to prove a pivotal moment for the GBP exchange rate complex.

Markets are becoming less pessimistic on the trajectory of talks, with Friday seeing further encouraging headlines doing the rounds, with a seasoned Brussels journalist reporting that the EU's Michel Barnier is ready to make some significant compromises on behalf of the EU in order to get a trade deal agreed over coming weeks.

If positive momentum in talks is officially confirmed next week GBP/CAD can crack higher and target 1.77, but disappointment could prompt a fall back into the above-mentioned 1.68-1.7159 range.