The Canadian Dollar fell 0.65% against the U.S. Dollar over the course of the past 24 hours amidst a fresh bout of investor nerves concerning the covid-19 infection rate in the U.S., signs that the U.S. is looking to rekindle its global trade war and news of a ratings downgrade for Canada from Fitch.

Fitch Ratings downgraded Canada's sovereign credit rating by one notch to AA+ with a stable outlook, from AAA, citing a "severe recession of the Canadian economy with 7.1% GDP contraction in 2020."

Fitch drew attention to increased reliance on funding from overseas by both government and Canada Inc, remarking that the current account deficit of 2.2% of 2019 GDP was "wide relative to the current 'AA' medians."

"The rating downgrade reflects the deterioration of Canada's public finances in 2020," says Kelli Bissett-Tom, a rating analyst at Fitch. "Pandemic lockdown measures and depressed global oil demand will cause a severe recession of the Canadian economy with 7.1% GDP contraction in 2020. Gradually improving global trade, commerce and domestic labor market conditions are expected to lead a 3.9% GDP recovery in 2021 supported by the reduction of trade uncertainties by the USMCA agreement's implementation."

The Loonie was wobbled but not by enough to tip the tables for the Pound-to-Canadian Dollar rate, which was lower by a fifth of percent at 1.6908. 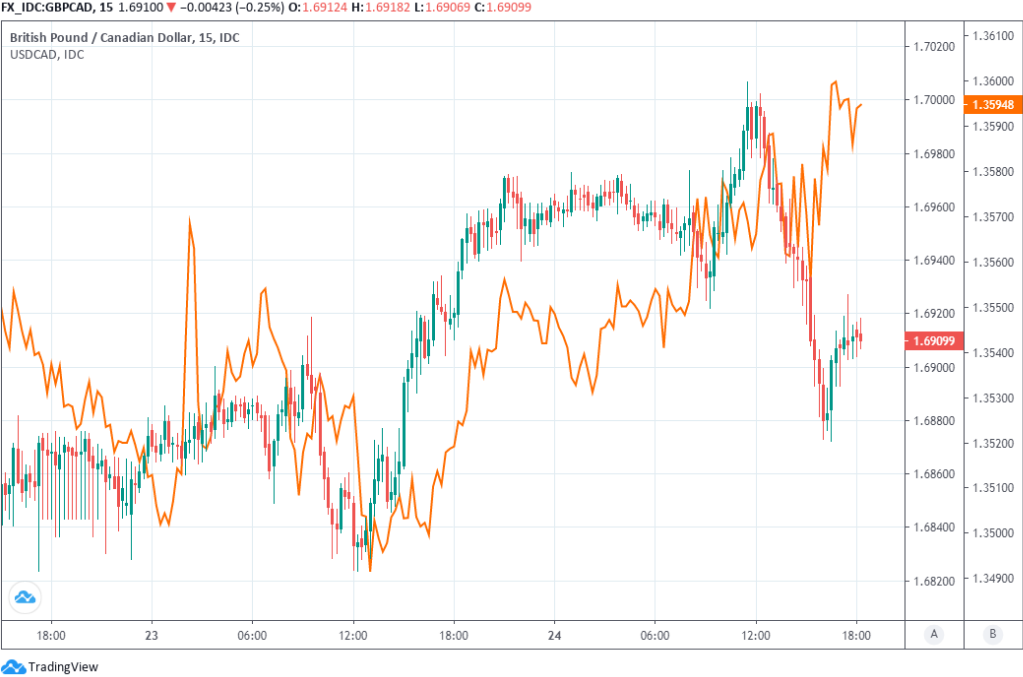 Above: Pound-to-Canadian Dollar rate at 15-minute intervals alongside USD/CAD in orange.

Serling slipped lower after the U.S. threatened new and higher tariffs for goods from France, Germany, Spain and the UK.

The move by the U.S. Trade Representative forms part of the administration's "carousel" strategy on tariffs whereby they periodically shift the goods under the tariff regime, which creates a persistent layer of uncertainty for businesses in the EU. A hallmark of Trump's tenure in the White House has been his use of tariffs to project his America First policy.

The announcement relates to goods worth only $3.1bn per year but is a possible prelude to a more significant bout of tensions with Europe, one that embroils the Brexit embattled UK economy and Pound Sterling.

New tariffs level the playing field between the British and Canadian currencies after the White House was reported in the prior session to also be on the verge of imposing fresh tariffs on imports of Canadian aluminium.

"Today’s dollar bid is rather appropriate given yesterday’s non-sensical, “risk-on”, USD selling following the US administration’s determined effort to walk back Peter Navarro’s “it’s over” comment with regard to the US/China Phase One trade deal.  Nothing fundamentally changed yesterday to warrant so much trade optimism!," says Eric Bregar, head of FX strategy at Exchange Bank of Canada. "We think this morning’s Bloomberg headlines about proposed EU/UK tariffs is a better reflection of reality (Trump’s continued confrontational tone towards trade worldwide).  There’s even talk that Canada could be slapped with tariffs."

Canada's aluminium trade with the U.S. is miniscule but similar to Sterling, mere speculation about the tariffs was enough to prompt underperformance by the Loonie that helped the Pound-to-Canadian Dollar rate to a second consecutive day of gains. That run higher culminated Wednesday in Sterling's failure to overcome the 21-day moving-average in blue on the below chart. 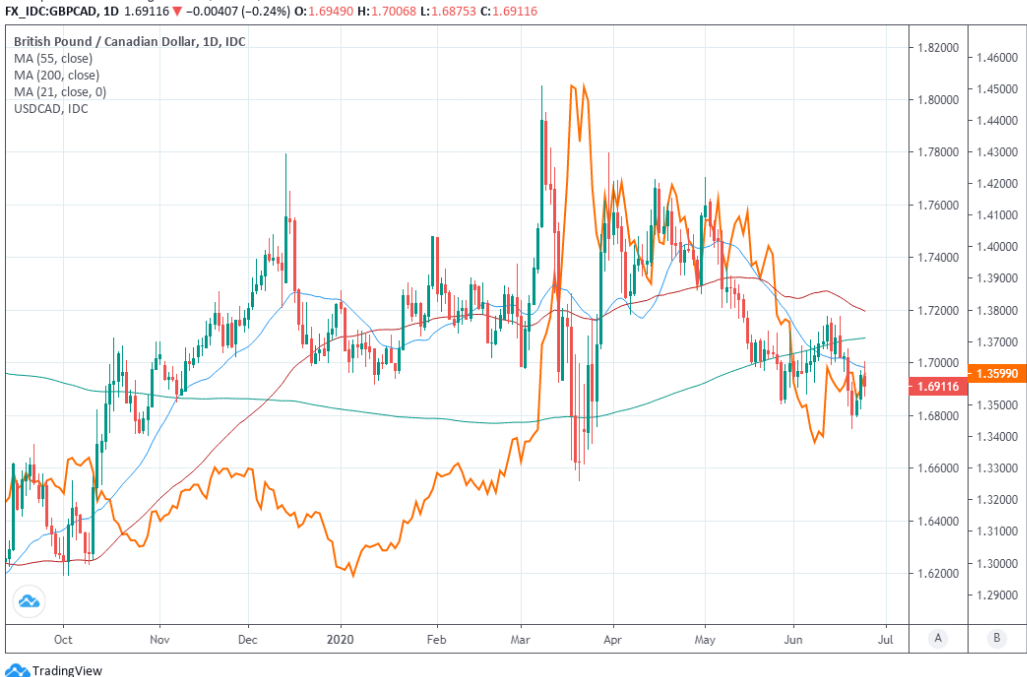 Above: Pound-to-Canadian Dollar rate at daily intervals alongside USD/CAD in orange.

Trade tensions between Europe and the U.S. levelled the playing field Wednesday and when combined with concerns about a growing second wave of coronavirus infections in the U.S., were enough to prompt a reversal of earlier gains for stock markets and positively correlated currencies.

Sentiment toward Sterling wasn't helped in the noon hours when European Brexit negotiator Michel Barnier spoke of a lack of progress in the Brexit negotiations before reiterating the EU's position on the so-called level playing field. The UK insists on what it calls a Canada-style trade agreement.

Both sides agreed last week to hold additional rounds of trade discussions in July in the hope of reaching a deal, although the EU insists on a so-called level playing field and a status quo settlement in relation to fishing, while deadlock remains in talks that run to year-end. 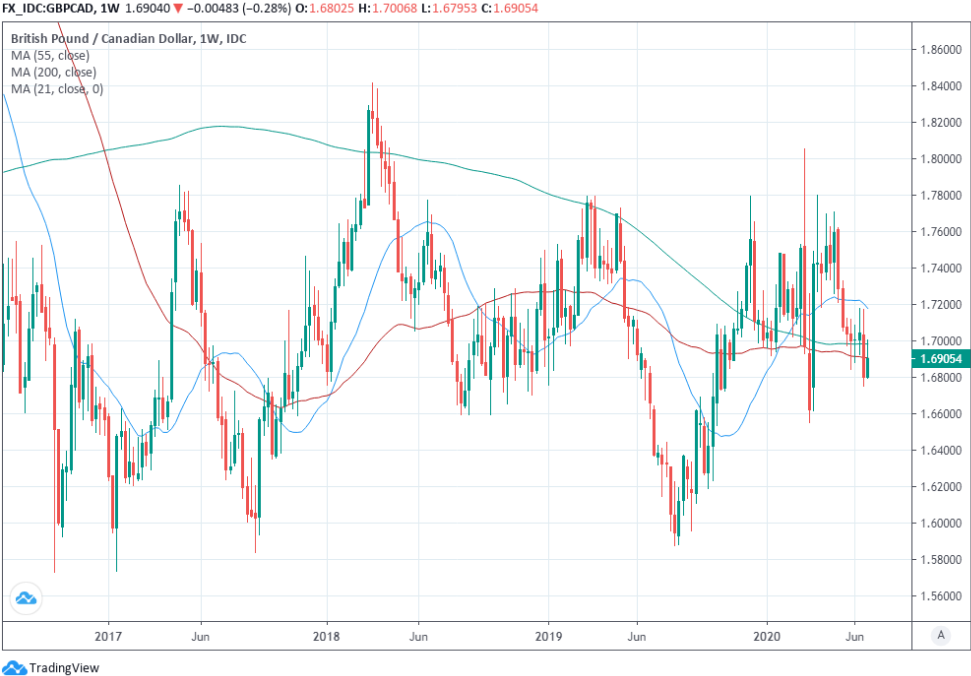 Above: Pound-to-Canadian Dollar rate at weekly intervals with 21, 55 (red) and 200-week (green) moving-averages.

The agreement had eased negative sentiments toward the Pound where the talks had previously been in danger of breaking down. Although the prospect of the UK being roped into a European trade spat with the U.S. is a threat to Sterling as well as risk appetite in the broader market.

The Pound and Loonie have both followed the path trodden by the S&P500 for months now but typically the Pound-to-Canadian Dollar rate itself would rise during bouts of widespread risk aversion though this relationship has been known to reverse whenever Brexit or other domestic concerns rear their heads.

"Overall, commodity currencies and, to a lesser extent, European currencies will continue to be correlated with US stock market futures. AUD remains the most responsive, followed by NZD, CAD, GBP and EUR," says Philip Wee, a strategist at DBS Group Research. "Unless stock markets start to embrace the recovery story again, currencies are unlikely to appreciate past the mean trend values of our model."

Stocks were was leading other markets lower Wednesday as investors reacted to reports of another record increase for new coronavirus infections in Florida. Meanwhile, Texas Houston area intensive care units were reported to have reached 97% of their capacity as second waves grew in a rising number of U.S. states and as markets kept one eye on the relationship between the U.S. and China, which came in for criticism from Secretary of State Mike Pompeo.

This was after a White House scramble to quash fears about January's 'phase one deal' after remarks by adviser Peter Navarro suggested it was "over".