The Pound-to-Canadian-Dollar rate has already seen some of the steepest losses of all British currency pairs but it's likely to fall even further in the months ahead as Europe sits out a global currency riposte to the U.S. Dollar, according to new forecasts from Canada's Desjardins.

Pound Sterling is the worst performing major currency of 2020 and has experienced some of its steepest losses relative to the Canadian Dollar as investors scramble to price-in a Bank of England (BoE) interest rate cut for the end of January. Meanwhile, Canada's Dollar is not quite top dog but it's still riding high in the major currency league table, aided by an interest rate that's the joint highest among comparable economies and an improved mood in the market that's benefited so-called risk assets.

Investor risk appetites have improved since October when the U.S and China first announced the 'phase one deal' that was signed Wednesday and which temporarily ends the tariff fight between the world's two largest economies. The sentiment lift from that agreement has already been positive for the Loonie although the anticipated, resulting stabilisation of the global economy could aid the currency further still if it enables the Bank of Canada (BoC) to leave its cash rate unchanged again in 2020. 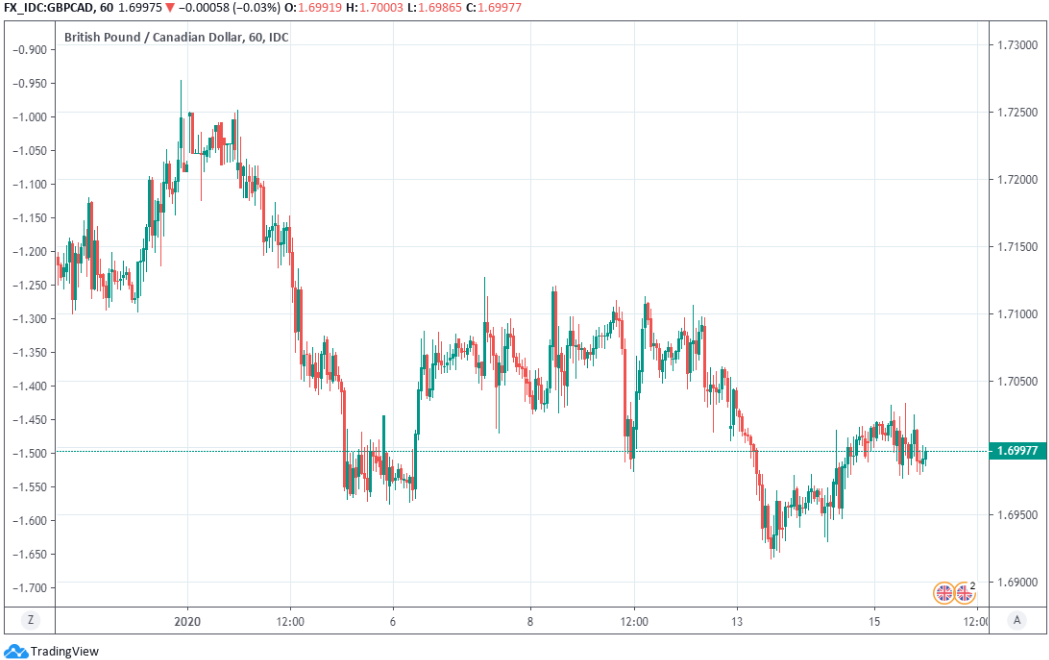 "U.S. economic growth should speed up due to the trade truce with China as well as the delayed effects of the interest rate reductions of 2019. That will help maintain a level of optimism which should be detrimental to the U.S. dollar. However, it may be more difficult for several European currencies to make gains in the coming quarters, due to more specific risks in that region," says Francois Dupuis, chief economist at Desjardins.

A stabilising global economy, a weakening U.S. Dollar and steady BoC cash rate of 1.75% are all tipped by the Canadian banking co-operative Desjardins to continue supporting the local currency through this year but forecasts for the Loonie's European counterparts are much less upbeat due to an unfavourable economic backdrop on the old continent and a busy schedule of risks that will eventually need to be confronted.

The European economic backdrop will be blighted this year by lingering risks around Brexit, given the UK and EU are set to enter negotiations about their future trade relationship after the UK's technical departure from the bloc on January 31. A 'no deal' Brexit is still a possibility for Great Britain come the end of those negotiations, which Dupuis says "may not be an easy matter." And any such 'crash out' exit would be bad news for both the Pound and Euro. 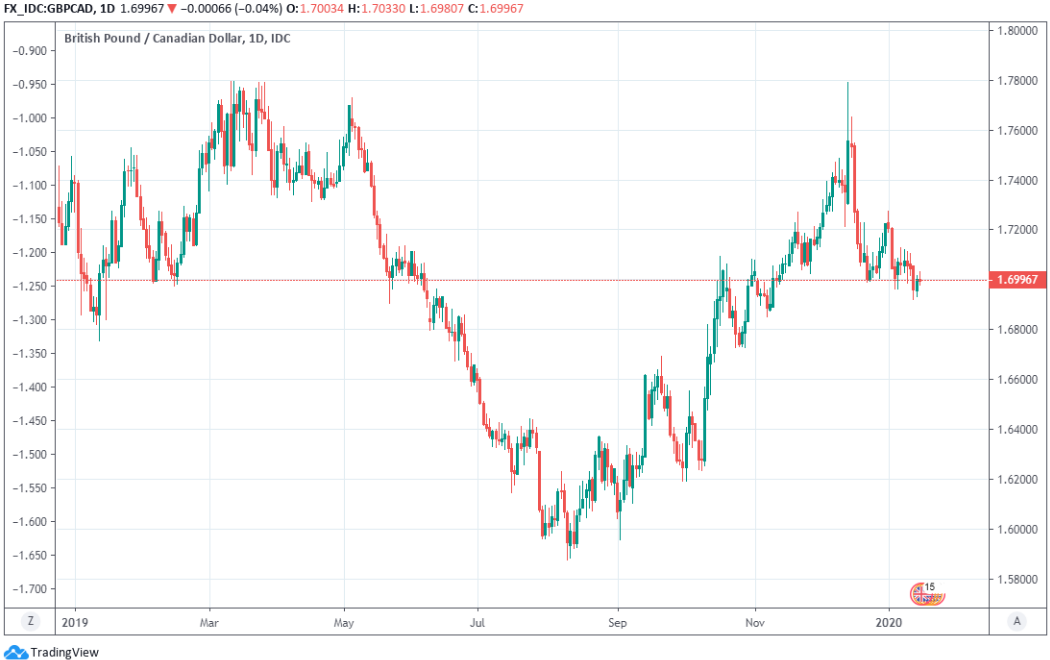 "The euro and the pound have experienced more difficulties since the beginning of the year," Dupuis writes in a forecast note to clients. "The European economic situation still seems very uncertain. Following the 2019 slowdown, it is still not clear that a sustainable rebound could take place in the coming months.Some progress has been made on the Brexit issue, but a future agreement between the United Kingdom and the rest of Europe still has to be negotiated."

Dupuis and the Desjardins team forecast the Pound-to-Canadian Dollar rate will fall from 1.70 on Wednesday to 1.6862 by the end of March and that it will trade close to that level through the rest of 2020. The GBP/USD rate is tipped to close 2020 at 1.2800, down from 1.30 Wednesday, while the Euro-to-Dollar rate is seen hugging its current 1.11 level right throughout the year. 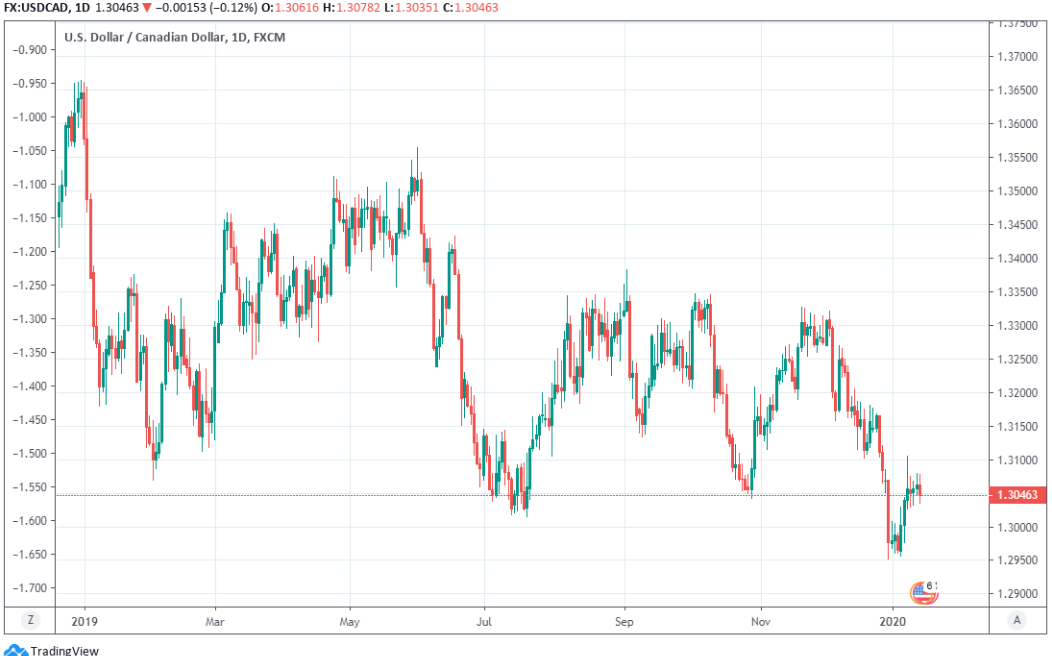 Sterling has retreated from all major rivals this year as markets scramble to price-in a BoE rate cut that's increasingly being anticipated for January 31, although the likely 25 basis point reduction to Bank Rate is not yet completely baked into the British currency so the Pound may well be vulnerable to further falls in the weeks ahead.

That could mean the Pound-to-Canadian Dollar also sees further downside, especially if the Loonie remains resilient, although some other firms are looking for an increase in the USD/CAD rate over the coming weeks that could help to offset some of the pressure on the Sterling exchange rate.

"We focus now on further upside potential for USDCAD on the risk that the market has the Bank of Canada rate outlook wrong (too high) and that CAD has more room for downside via mean reversion relative to other USD pairs and on positioning as CAD is one of the few currencies the market is long of versus the US dollar," says John Hardy, chief FX strategist at Saxo Bank. "A close clearly of 1.3150 could set in motion further potential higher toward 1.3500."