- Data does little to panic Poloz and Bank of Canada says RBC.

The Canadian Dollar retreated from an eight-month high Friday after official data revealed a surprise increase in joblessness during June, just as the Loonie's U.S. rival was celebrating a barnstorming rebound in employment growth across the southern border.

Canada's economy saw employment fall by 2.2k in June and the unemployment rate increase by 10 basis points to 5.5%. The former came as a disappointment to a market that was looking for an increase in headcount of 10k but the jobless rate was in line with expectations and only just up off a record low.

Statistics Canada says the economy created 132k new jobs in the second quarter with almost all of them in the full-time work category, while employment increased 2.3% during the year to the end of June. Wages grew by some 3.6% in June on an annualised basis.

"Canadian job creation had been running at what seemed like an unsustainable pace, but stopped to take a bit of a breather in June. The slight decline in employment was what we expected, but was a small miss versus consensus hopes. Still, the market won’t pay too much attention to the pause in hiring, given that job growth over the past year, and in Q2, looks blazing hot," says Royce Mendes, an economist at CIBC Capital Markets.

Canadian jobs growth had been strong going into June, with more than 27k new jobs added in May, which itself followed a blockbuster 106.5k increase in April. The two reports pushed the jobless rate down to a record low in May.

Those numbers, as well as Friday's figures, are notable for a number of reasons but not least of all because there hasn't yet been any meaningful downward correction in jobs growth since the huge increase seen back in April. Normally, when jobs rise or fall so wildly in any given month the trajectory often reverses in subsequent periods

"The tiny dip in employment – given the size of ‘normal’ swings in this notoriously volatile report – does nothing to change the narrative that Canadian labour markets still look relatively solid," says Nathan Janzen at RBC Capital Markets. "The labour market data will only reinforce the expectation that the Bank of Canada will not follow the US Fed with what are now widely-expected rate cuts south of the border."

Above: Contributions to changes in employment growth. Source: Statistics Canada.

"The Bank of Canada will have little reason to make any sharp pivots next week. That said, GDP growth is likely to cool over the remainder of the year, as much of the recent acceleration looks like nothing more than a rebound from a couple of very weak quarters," says CIBC's Mendes.

Canada's labour market strength comes at a time when financial markets are flirting with the idea of betting openly on a Bank of Canada (BoC) interest rate cut before year-end and as investors are throwing bucket loads of cash at wages that say the Federal Reserve will be forced to radically reduce U.S. borrowing costs before the year is out.

In fact most developed world central banks are widely expected to begin cutting borrowing costs sooner or later and this is part of the reason why the Loonie is now the strongest G10 currency of 2019. There are good reasons for why markets are sceptical of suggestions the BoC might cut rates later this year too.

"We look for the Bank of Canada to strike a relatively neutral tone at next week’s meeting, deviating from policymakers at the US Fed and ECB that have turned increasingly dovish. Governing Council is likely to highlight signs of domestic resilience that offset growing trade risks and, for now, obviate the need to for a more accommodative policy stance," says RBC's Janzen. 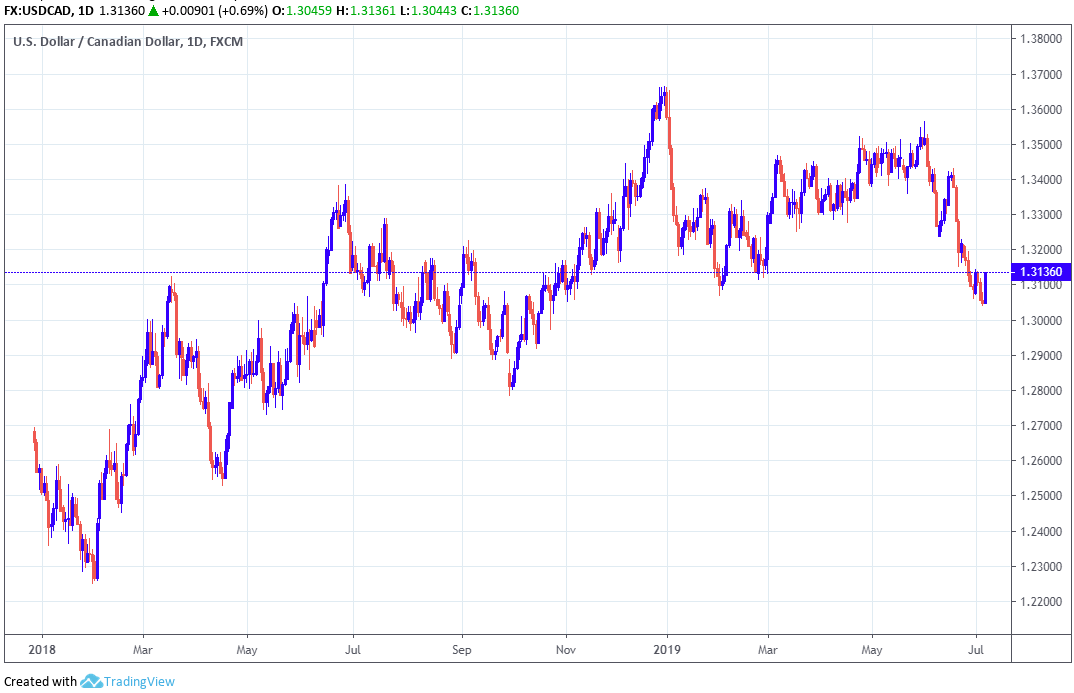 Canadian GDP data for the month of April surprised on the upside last Friday, with the economy having grown 0.3% during the period when markets were looking for an expansion of just 0.2%. That pushed the three-month growth rate up from 0.1% to 0.3%.

That growth data came barely more than a week after other data showed the main Canadian inflation rate surging from 2% to 2.4% in May, while all of the core inflation measures preferred by the Bank of Canada (BoC) averaged 2.1% that month, which is above the 2% target for the first time since February 2012.

BoC Governor Stephen Poloz said in May that future rate decisions would be dependent on "developments in household spending, oil markets and the global trade environment." The comments appeared to make future hikes contingent on a deescalation of the U.S.-China trade war and a range of other factors.

And Presidents Donald Trump and Xi Jingping agreed last weekend to avoid imposing further tariffs on each other and to resume their previously abandoned talks aimed at addressing U.S. concerns over "unfair" trading practices, which is positive for the BoC even if it's far from certain that the truce will last.

Anticipated rate cuts in the U.S. and elsewhere, combined with the resilience of the Canadian economy, have now got many forecasters tipping a continued strong performance from the Loonie into year-end. Canada's currency remained the best performer in the G10 universe for 2019 Friday. 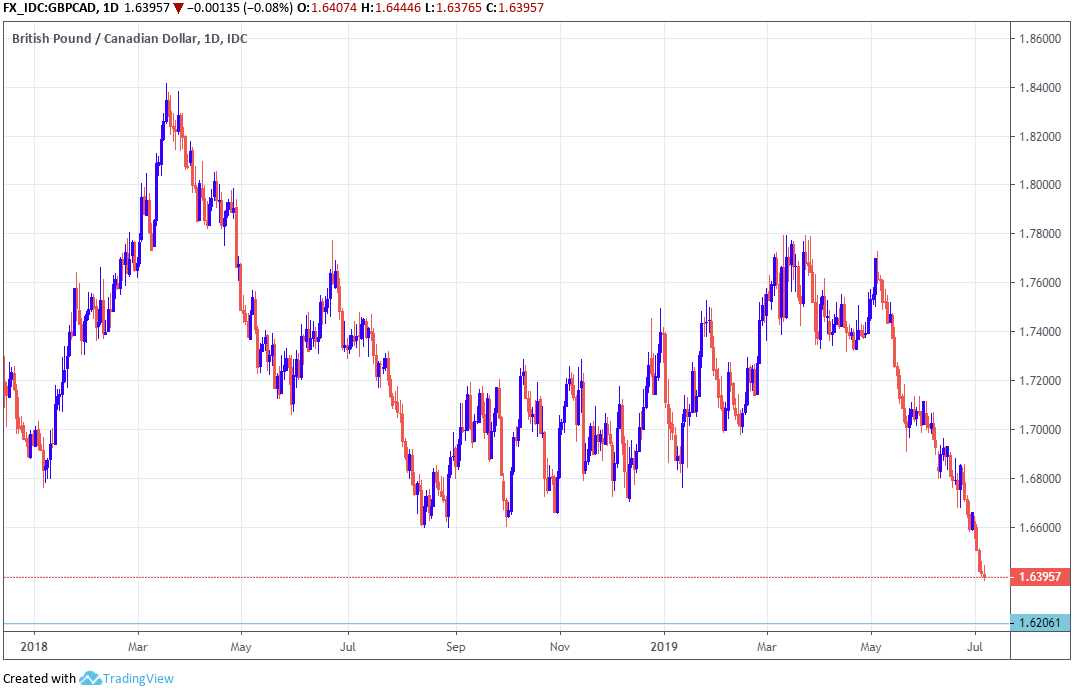