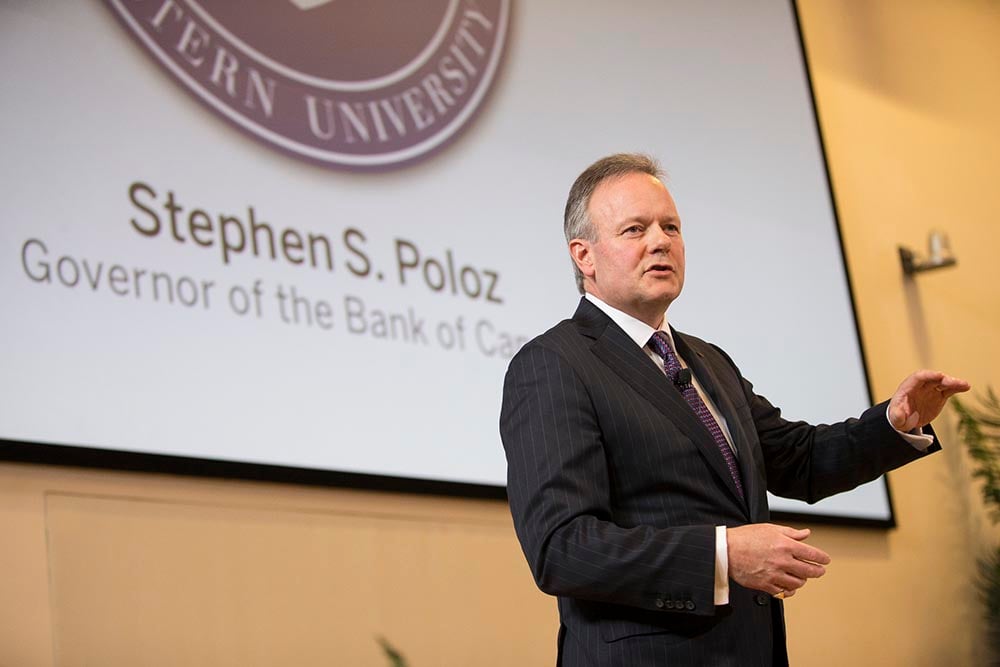 - CAD advances after inflation surprises in May, breaches BoC target.

The Canadian Dollar advanced strongly against many of its rivals Wednesday after Statistics Canada figures revealed a surprise surge in inflation for the month of May, which could now prevent the Bank of Canada (BoC) from cutting its interest rate, and might even force it to resume its effort to lift rates.

Canadian inflation rose by 0.4% in May, above the 0.1% consensus, which drove the annualised rate of price growth up from 2% to 2.4%. Prices rose in most categories of goods, although gasoline costs fell because when fuel is excluded from the numbers, inflation was actually 2.7% in May.

All of these measure of inflation are either testing the Bank of Canada's 2% target, or are now already well above it. The core measures matter more for Bank of Canada interest rate policy but even those look to have upward momentum because the average of the three was just 1.9% in April.

"Consumer prices raced past expectations in May, leaving the inflation rate running at its fastest pace since October," says Royce Mendes, an economist at CIBC Capital Markets. "The hotter-than-expected inflation readings will leave bond yields higher and the Canadian dollar stronger as markets await the main course with the Fed on tap this afternoon." 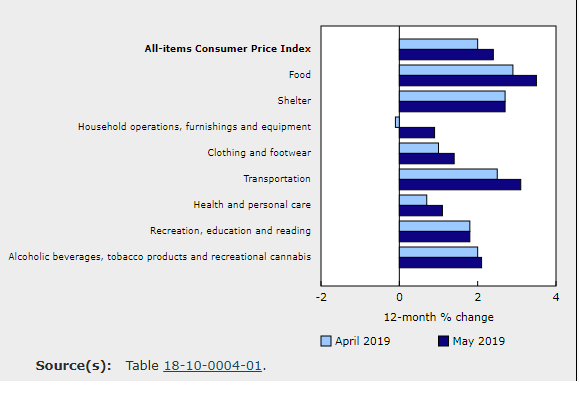 "Inflation numbers like today’s—with core measures creeping higher in May but remaining around the 2% target—are one reason the BoC faces less pressure to reverse course and begin easing monetary policy," says Josh Nye, an economist at RBC Capital Markets, in a note to clients.

Markets care about the inflation data because it is the outlook for consumer price pressures that dictates central bank interest rate policies, and its changes in the relative interest rate outlook which drive the capital flows that government movements in exchange rates.

Above-target inflation, and signs that price pressures are building from any level, often get markets contemplating the odds of whether an interest rate hike is on the horizon and lift the Canadian Dollar a lift. But the opposite is also true.

"The BoC is subject to the same global forces as the Fed, and a further increase in trade tensions would raise the likelihood of both central banks lowering interest rates. But for now, stable to slightly higher inflation readings and generally improving domestic data allow the BoC to remain patient," Nye adds.

Changes in interest rates are only normally made in response to the inflation outlook, which is sensitive to growth, but impact currencies because of the influence they have on capital flows and their allure for short-term speculators.

Until Wednesday, financial markets had been betting to a modest extent the Bank of Canada would cut its interest rate before the year is out, although the conviction behind those bets could now be wavering.

"This will undoubtedly add to the evolving BOC narrative of things "looking up" and hence, some CAD optimism. However, the hurdle is high for us to clear this mark in our view, and we require a material pick-up in activity data and reduced threat of easing (in the Fed as well as the BOC) to validate that sentiment,"  says Mark McCormick, head of FX strategy at TD Securities. 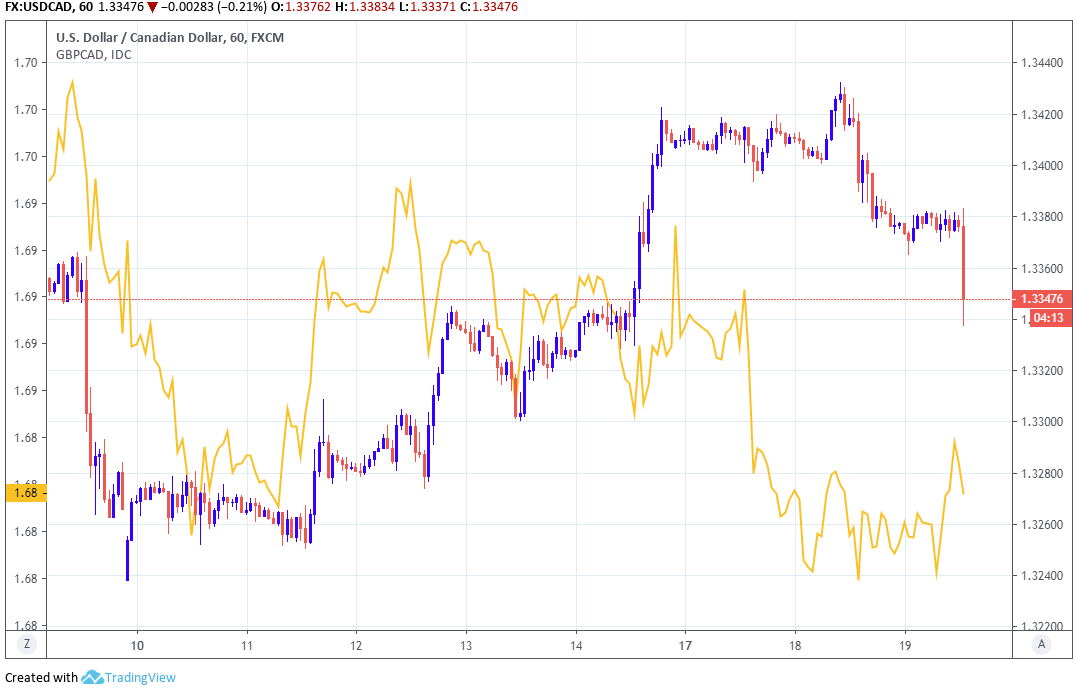 "We note that USDCAD is mostly trading where it should based on [fair value], leaving dips supported in the 1.3360/90 area," McCormick adds, in a note to clients following the release.

"We look for USD-CAD to push higher during H2 2019, in part reflecting our bullish USD view but also our expectations of challenges facing the CAD. We retain our year-end forecast of 1.40," says Daragh Maher, a strategist at HSBC. 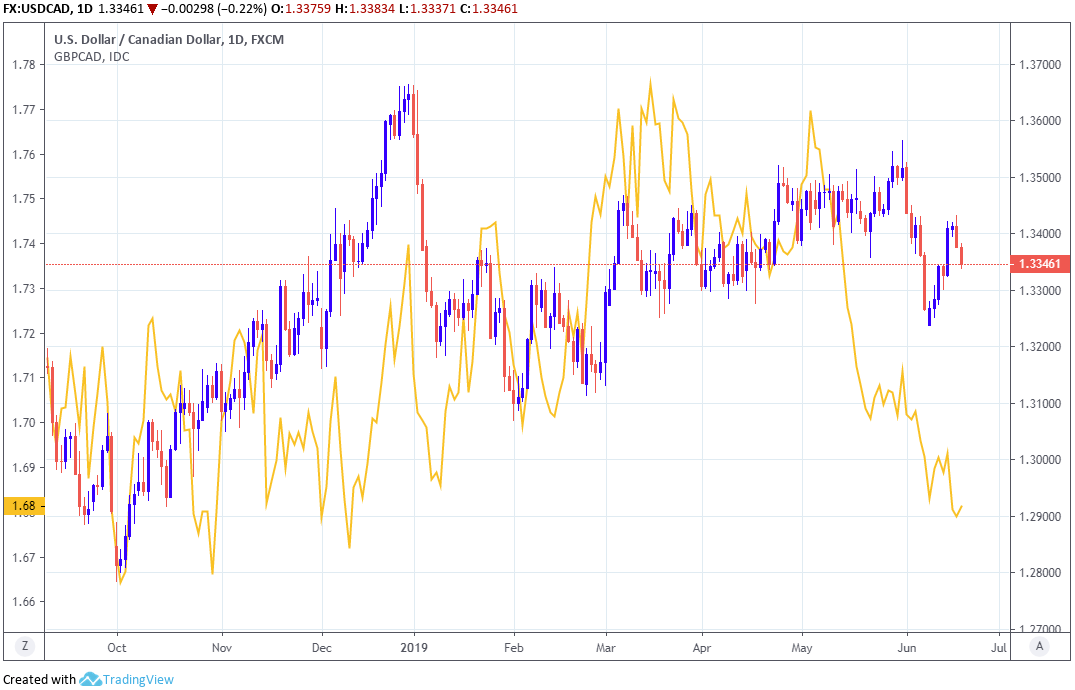 The Bank of Canada appeared to suggest in May that it could be quite some time before it lifts interest rates again, even if the domestic economic outlook has improved notably of late.

BoC guidance is that future rate decisions will be dependent on developments in the economy and that policymakers will pay close attention to "household spending, oil markets and the global trade environment."

President Donald Trump said Tuesday he will meet with his Chinese counterpart on the sidelines of the G20 conference in Osaka at month-end, stoking hopes that an imminent escalation of the U.S.-China trade war can be avoided.

"Trade tensions remain elevated, notably between the US and China. Exports remain weak. If trade tensions persist, as seems likely for now, risk aversion will remain prominent and keep the CAD under selling pressure," says Maher. 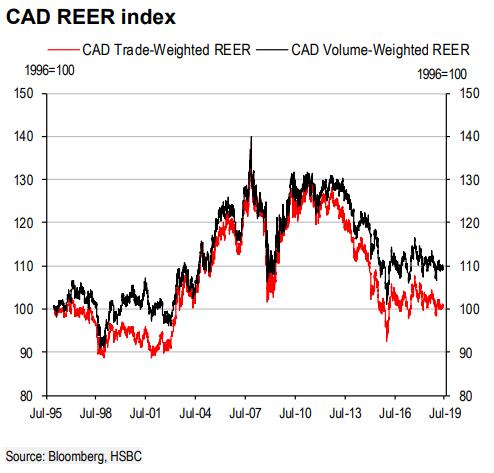 Above: Canadian real-effective-exchange-rate weighted for trade and volume.

Trump has been threatening to impose a 25% tariff on the remaining $300bn of China's annual exports to the U.S. if his counterpart does not agree to sign up to a deal that Chinese negotiators previously backed out of.

A U.S.-China breakthrough, combined with a decent performance from the Canadian economy, could be enough to get the BoC lifting interest rates again later in the year if the bank's own guidance is anything to go by. But some say there are also other factors likely to be at work in the BoC's thinking.

"For the foreseeable future the BoC will have a close look at the Fed’s decisions when considering its own monetary policy. One of the reasons behind this will be trying to avoid excessive CAD appreciation against the US dollar," says Antje Praefcke, an analyst at Commerzbank. 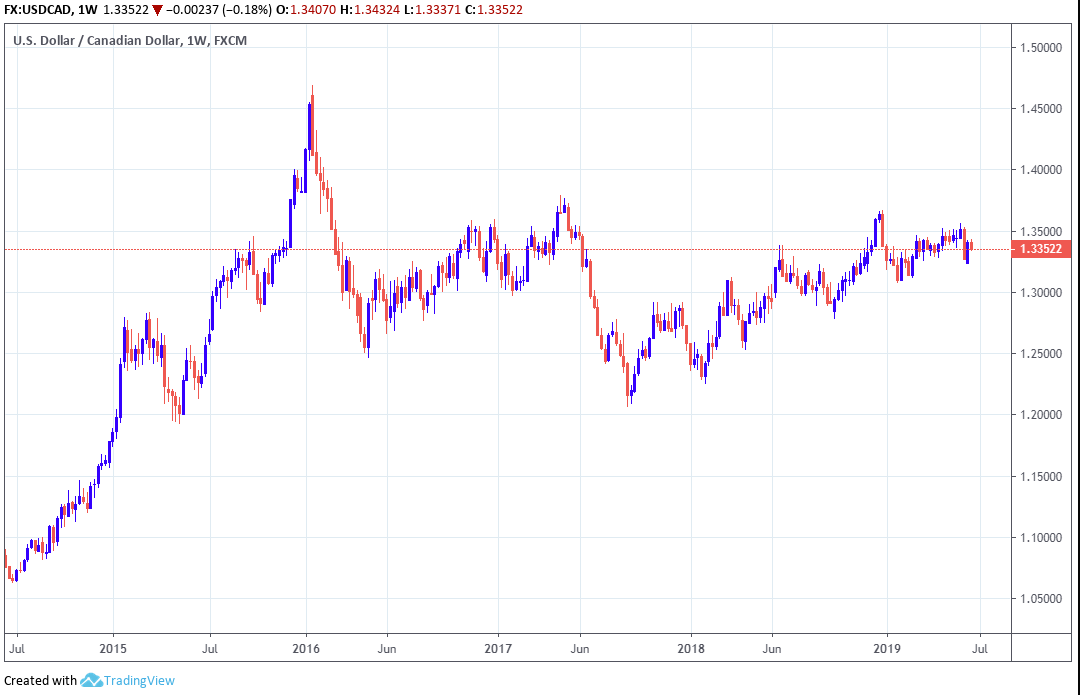 The Federal Reserve is set to announce its latest interest rate decision at 19:00 London time Wednesday and analysts are looking for it to validate market bets that U.S. interest rates will be cut before year-end.

Those Fed rate cuts would risk hobbling the U.S. Dollar. Furthermore, if Fed cuts are combined with a Bank of Canada that either fails to follow suit or that hikes its own interest rate, the USD/CAD rate could fall significantly. The U.S. is Canada's largest trade partner so changes in the USD/CAD rate can have an impact on the economy.

A much lower UDC/CAD would mean a stronger Loonie, which would make Canadian exports more expensive for Americans to buy while rendering U.S.-made goods much cheaper for Canadians to buy. That's a problem because exports are an addition in the calculation of GDP and imports are a substraction.

"Inflation hasn’t been and is not going to be the main issue for the Bank of Canada (BoC)," Praefcke writes, in a note to clients Wednesday. "Global factors such as the trade conflict and US monetary policy will remain the main drivers."