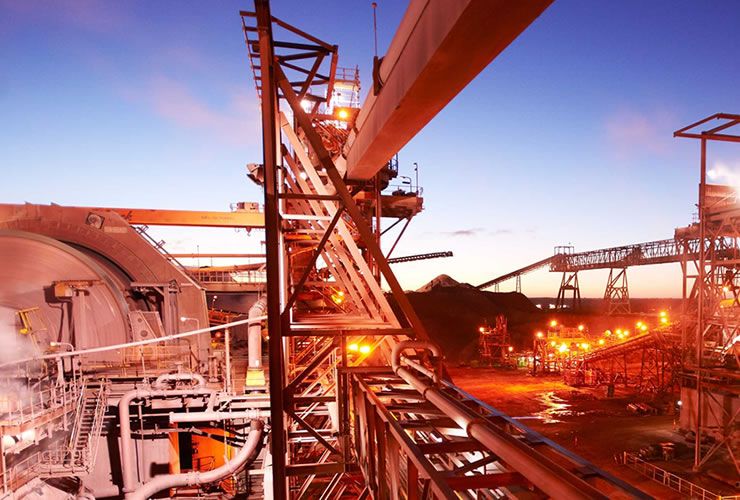 The debate over whether the Australian dollar (AUD) is in fact overvalued and due a period of corrective decline is arguably best answered by a the price of copper.

The Aussie dollar is on the charge higher once more having reached 0.7632 against the Greenback; the trend higher is truly alive and well and soon we could see the multi-year highs at 0.7730 broken.

Against the pound we see the Aussie trading at levels not seen since January 2015 and again, there is little technical evidence at hand to suggest the trend will turn.

The renewed advance comes courtsey of stronger commodity prices with the broad CRB index edging higher led by a jump in the oil price as US crude inventories unexpectedly fell.

Commodities still matter for this currency, but it is copper that we should really be focussing on when trying to gauge what the future holds.

It is also the country’s 9th largest export and a useful economic barometer as it is a handy guide on direction in the Australian dollar’s valuation because of the large impact its sale on the international markets has on the country's current account.

The current account, in turn, has a fundamental bearing on the exchange rate.

The religious zeal with which the AUD/USD follows the copper price allows us to figure out when the Australian dollar is either over- or under-valued.

As the below model provided by Societe Generale shows, the Aussie will always revert back to the copper price until such a time that the Australian economy is able to fully detach itself from its reliance on the mining sector.

That time is not now, and while the economy is shifting away from this reliance on raw commodity exports there is some distance yet to travel. 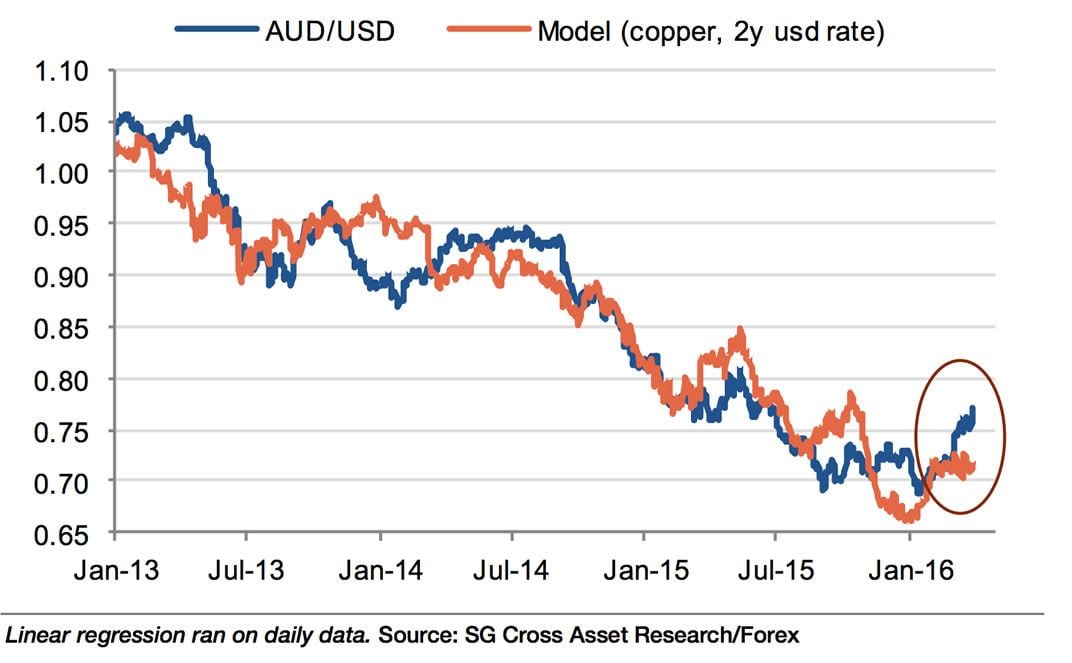 The above tells us that the Australian dollar is fundamentally overvalued at this stage in time, having potentially over-extended itself during the course of the 2016 commodity sector recovery.

Either the copper price needs to come up or the Australian dollar comes down.

According to the most recent analysis of copper market fundamentals conducted by analysts at Barclays, the copper price is not likely to rise.

“Over the past week, copper prices have converged with our view that the recent rally was unsustainable, as it was built on transient technical factors and poor fundamentals,” says Dane Davis, a commodity analyst with Barclays.

An oversupply of copper is considered one of the main drivers of the decline:

The slow-down in the Chinese economy is a further reason for expecting copper to fall:

“In the second quarter, we see copper continuing to weaken, as the seasonal uptick in Chinese economic activity is not enough to offset strong inventory levels and a worrisome medium-term outlook.”

Consider further the fact that as reported by Bloomberg News, Shanghai’s biggest futures brokers have switched to a net-short position on copper, from a previous net long position.

Net short positioning, as of 1 April, rose to 12,058 contracts on SHFE, from the previous week’s 1,063 contracts net long position.

Barclays forecast that copper prices will continue falling, averaging 4520 dollars (per ton) in Q2, before falling even lower to 4180 in the 4th quarter.

What do Iron Ore Prices Tell Us?

The message delivered by the relationship between copper and the Aussie dollar is echoed by the currency's relationship with another industrial metal - iron ore.

Here too there is a strong correlation: 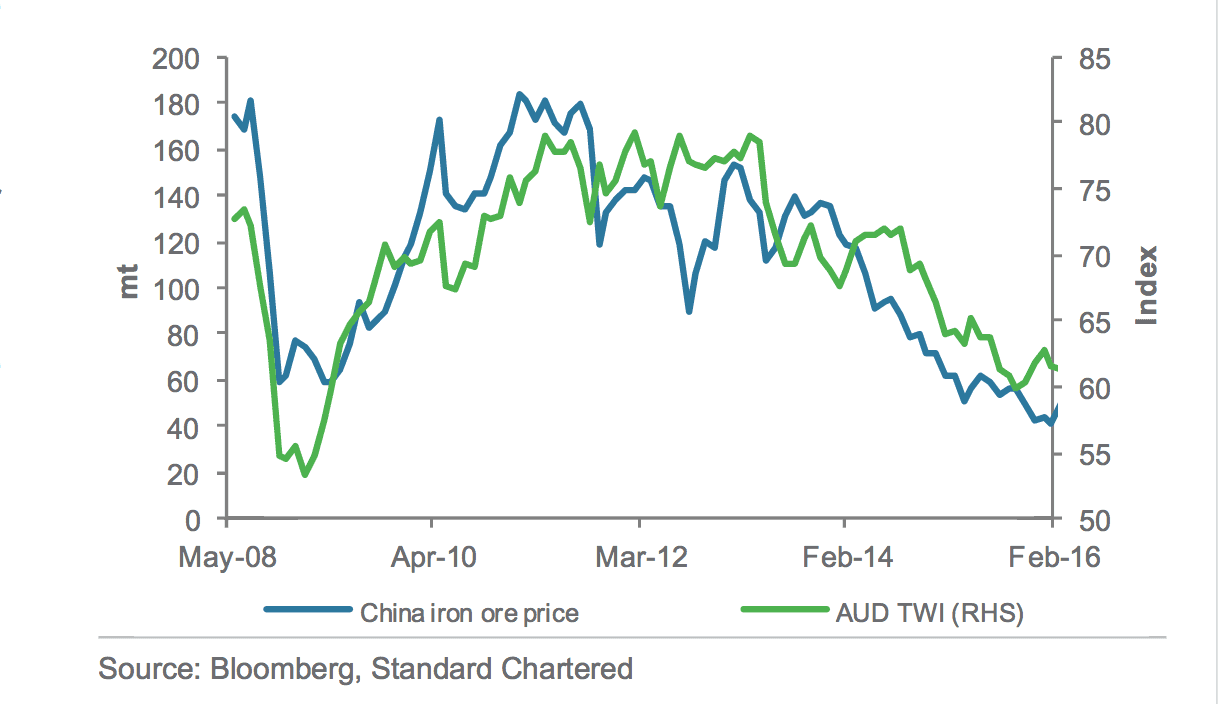 “While we have upgraded our outlook on commodities, we continue to see weakness in the industrial metals space including iron ore,” say Standard Chartered in an April investment note to clients.

As a result analysts at the Asia-focussed bank Chartered expect modest weakness in the AUD through 2016 and do not see AUD’s fundamentals improving significantly based on their observations of  iron ore price dynamics.

“Moreover, we believe the RBA is likely to further reduce interest rates should the AUD continue to rally.”

So if copper and iron ore prices are unlikely to rise then the Aussie dollar must presumably obey long-term trends and come down.

Maybe this is something Reserve Bank of Australia (RBA) Governor Stevens and his team know and why they are unlikely to target the currency in agressive fashion over coming weeks.

While the RBA suggested on Tuesday the 5th of April that the Australian dollar was becoming uncomfortably strong, there was also a willingness to allow market forces to deal with the currency.

Maybe Stevens & Co. are watching the currency’s relationship with copper?