Sterling and the Australian Dollar both softened against a broadly stronger U.S. Dollar on Wednesday as risky assets were given a wide berth by investors going into a volley of central bank monetary policy decisions including the latest from the Federal Reserve (Fed) and Bank of England (BoE).

GBP/AUD was treading water around 1.70 and near to some of its lowest levels since the final quarter of 2018 but would risk tumbling to 1.60 or below on Thursday if this admittedly wild and entirely speculative forecast is right.

However, even in any scenario where Sterling avoids notable losses following Thursday's BoE decision, some analysts still see the Pound to Australian Dollar exchange rate as being likely to reach new multi-year lows in the days ahead.

"We expect the BoE to hike by 50bp to 2.25% though would not be surprised if a 75bp hike is delivered. We expect GBP to weaken to a new cyclical low under 1.1300 given the OIS market is pricing a 65pt increase. AUD/GBP could set a new cyclical high above 0.5939 tomorrow [GBP/AUD: 1.6837]," says Joseph Capurso, head of international economics at Commonwealth Bank of Australia. 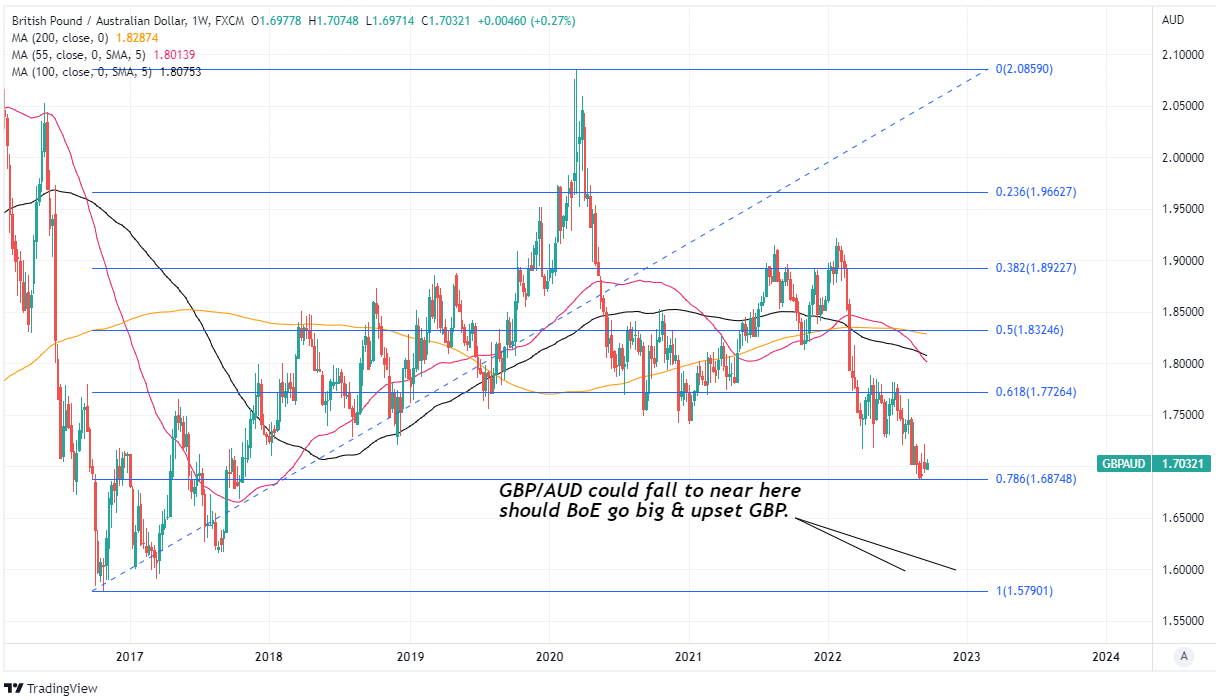 "The largest influence on AUD over the next twenty four hours will be the FOMC’s policy decision. A hawkish Chair Powell or a surprise 100bp increase could push AUD/USD to a cyclical low below 0.6600," Capurso said on Tuesday.

The calendar is devoid of major appointments for the Australian Dollar since Wednesday's speech from Reserve Bank of Australia Deputy Governor Michele Bullock, who announced details of the RBA's 2021 financial results during at an event hosted by Bloomberg.

There was no reaction from the Aussie when Bullock said the RBA would report an A$36.7BN accounting loss within its financial statements for 2021 next month, with the loss arising due changes in the value of the government bond portfolio acquired as part of its quantitative easing programme.

"Unlike a normal business, there are no going concern issues with a central bank in a country like Australia. Under the Reserve Bank Act, the government provides a guarantee against the liabilities of the Reserve Bank. Furthermore, since it has the ability to create money, the Bank can continue to meet its obligations as they become due and so it is not insolvent," she said in part.

"But the Reserve Bank of Australia is unusual in using market value accounting without an indemnity from the Government. For example, both the Bank of England and the Reserve Bank of New Zealand use market value accounting for securities purchased under their equivalent bond purchase programs but their profits are unaffected by mark-to-market gains or losses because they are offset by a matching entry that reflects the value of their indemnity," she added.

This leaves the immediate outlook for the Australian Dollar and Pound hinged largely on Wednesday's Fed decision and its impact on the U.S. Dollar going into Thursday's BoE decision.

Almost all forecasters expect the Fed to lift its interest rate by 0.75% to 3.25% but some have warned that an exceptional 1% increase could be seen in light of recent inflation data and given that many Fed policymakers had expected U.S. inflation to be in the midst of an unamiguous decline at this stage.

"A hawkish message from Powell tonight is likely to keep the pressure on cyclical FX," says David Plank, head of Australian economics at ANZ. 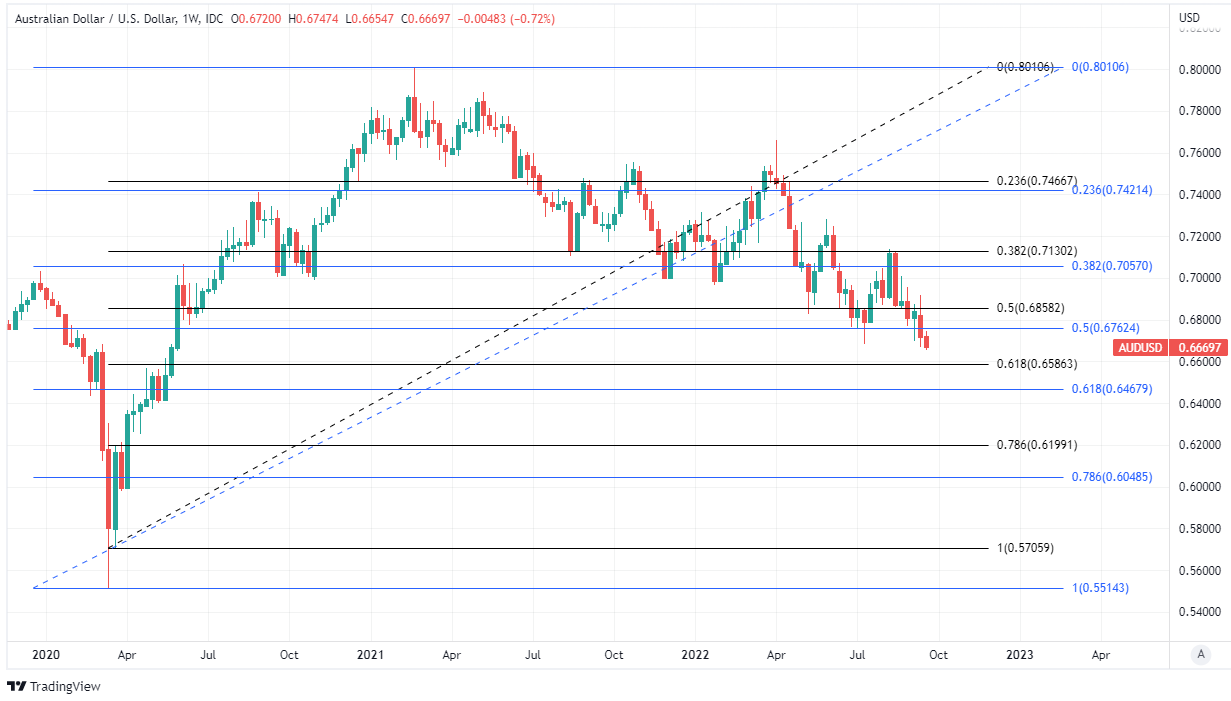 August's data released last Tuesday showed overall and core U.S. inflation accelerating in month-on-month terms so there may be a danger of the Fed feeling compelled to act more aggressively than it has done at any point thus far in the interest rate cycle.

This is potentially a further burden for AUD/USD and perhaps more so in light of September's shift in stance from the RBA, which indicated earlier this month and again last week that its own rate cycle could be nearing its end.

There is a chance of the Fed decision transpiring to be a negative influence on the U.S. Dollar, however, and so also supportive of AUD/USD although this would likely only be the case if the bank indicates that it too is also approaching a likely end of the U.S. rate cycle.

"The USD has benefited from the continuing rise of US rates and yields but because the moves were further accompanied by a deterioration of risk sentiment, most of the gains were vs less liquid, risk-correlated currencies," writes Valentin Marinov, head of FX strategy at Credit Agricole CIB, in a Wednesday research briefing.

"With many Fed-related positives in the price, we believe that the key USD driver would be the impact of the policy meeting on risk sentiment. In that, we remain quite cautious given that Fed Chair Jerome Powell could use the press conference to highlight that the Fed remains very focused on US inflation rather than growth. In turn, we think that the safe-haven USD could remain supported with the less liquid, risk-correlated currencies likely to bear the brunt of any further USD gains," he added.