"I think we'll cycle around some number between 2½ and 3½—it's hard to be specific—and we'll cycle up and down that with the economic cycle. We're closer now to that, aren't we? We're 2.35, so we're getting to that range that you'd think is normal but probably still on the low side," - RBA Governor Philip Lowe.

Australia's Dollar ceded ground to around half of its G10 counterparts on Friday while rising against the remainder of the grouping including Sterling, the Kiwi, Norwegian Krone and Japanese Yen, while it also advanced against some G20 currencies including the Renminbi, Rand and Korean Won.

This mixed performance may be more reflective of strength in the U.S. Dollar and declines in China's Renminbi as it came quite some time after RBA Governor Lowe made some of his most detailed remarks yet on how far and how fast Australian interest rates may or may not rise up ahead.

"We're closer to a normal setting now, which means that the case for large adjustments in interest rates has diminished. I think at our next board meeting we'll be considering whether it's a 25-basis-point increase or a 50-basis-point increase. I think it's likely we'll increase rates again, and that will be the discussion we're having, and it will really come down to how we view the balance of these risks that we've been talking about," Governor Lowe told the House of Representatives Standing Committee on Economics. 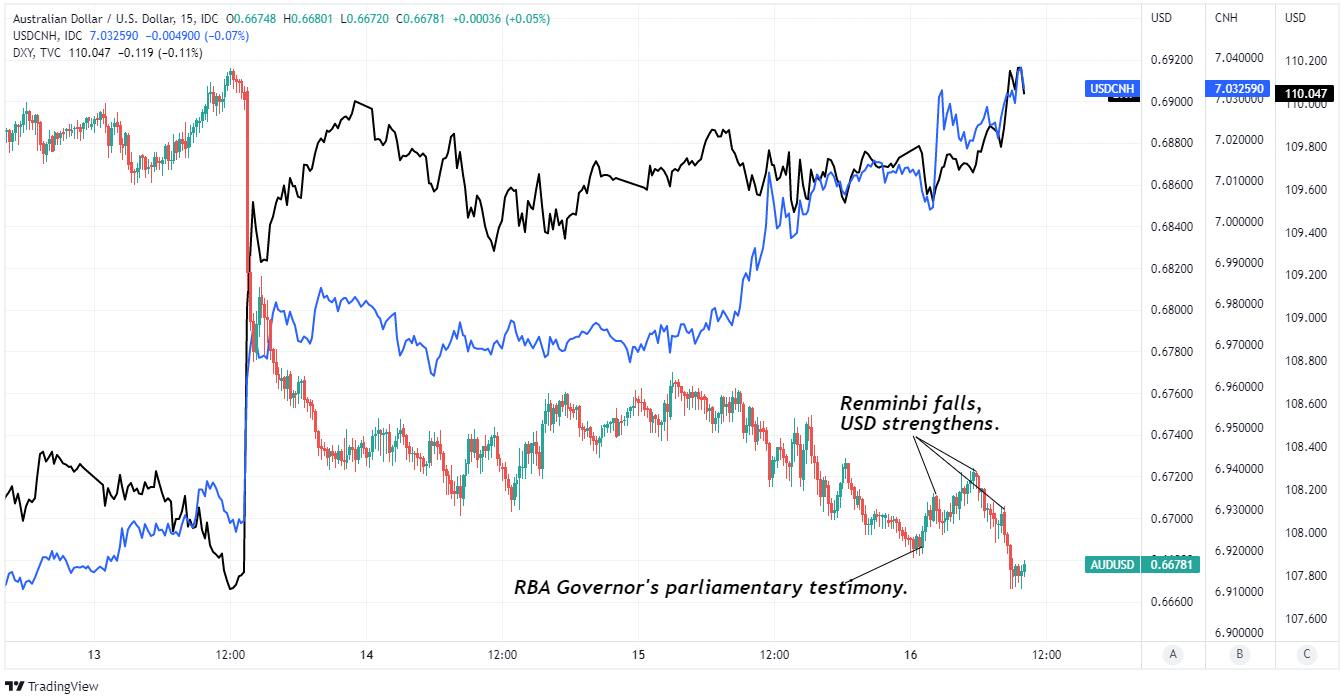 Above: AUD/USD shown at 15-minute intervals alongside U.S. Dollar Index and Dollar-Renminbi rate.

"We would only see rates come back down to close to zero if we had a sharp downturn again. But I think we'll cycle around some number between 2½ and 3½—it's hard to be specific—and we'll cycle up and down that with the economic cycle. We're closer now to that, aren't we? We're 2.35, so we're getting to that range that you'd think is normal but probably still on the low side," he also said in response to another question from the committee.

Governor Lowe's opening remarks can be viewed here and a transcript of the testimony can be accessed here.

In September the RBA lifted its cash rate by half a percent for a fourth time since beginning to raise rates in May 2022, in what was a fifth increase that took the benchmark up to 2.35%, although since then Governor Lowe has warned of a downshift in the pace at which rates rise going forward.

However, previously he had said only that the argument for moving in smaller increments or slowing the pace of rate increases would grow stronger as the benchmark climbs, making Friday's remarks the most detailed insights from the governor into how the interest rate cycle may be likely to evolve going forward.

"I think for inflation to come down and to navigate this narrow path we are relying on wage growth not picking up too much more, it's a difficult message, and relying on profit margins not rising further—in fact, coming back a little bit in some industries as demand stabilises. We're relying on both those things. I called them out of my introductory statement, because we need to see those two things," he also said on Friday. 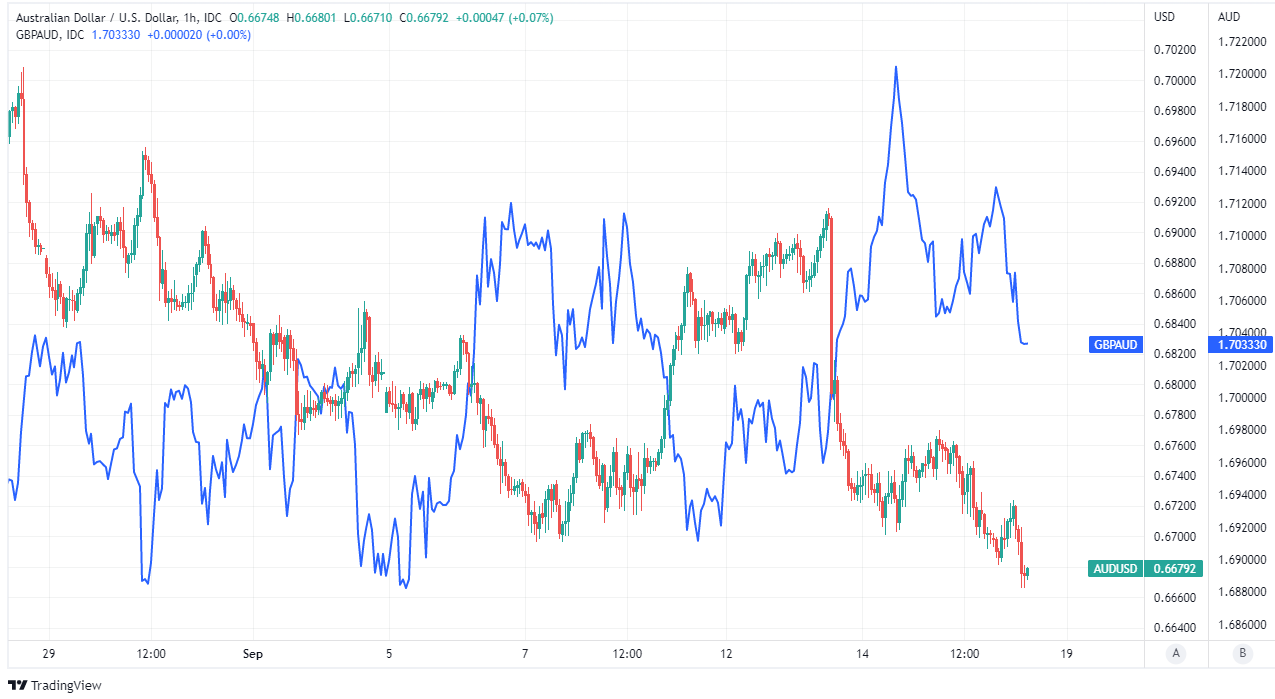 Above: AUD/USD shown at hourly intervals alongside GBP/AUD.

Friday's suggestion that the cash rate may be likely to top out around the 3.5% and average 2.5% over the medium-term implies that Australian borrowing costs may be likely to rise to a higher level than has been anticipated by many local economists but that the benchmark cash rate would also top out lower than financial markets expect.

Prices or rates in the interest rate derivative markets have for some time implied an expectation among investors that the RBA cash rate would reach 3.85% early in 2023.

"The RBA Governor’s recognition of the lags coupled with his comment today that the case for a slower pace of increase in interest rates becomes stronger as the level of the cash rate rises supports our call that the next move in the cash rate will be a ‘business as usual’ 25bp hike at the October Board meeting," says Gareth Aird, head of Australian economics at Commonwealth Bank of Australia.

"Such a move would take the cash rate to 2.60%.From there our central scenario sees the RBA deliver one final 25bpratehike at the November Board meeting which would take the cash rate to 2.85% (this previously was the risk to our base case and today we have incorporatedthat risk into our central scenario). We continue to look for RBA rate cuts in H2 2023 and have 50bps of easing pencilled in," Aird wrote in a Friday research briefing.