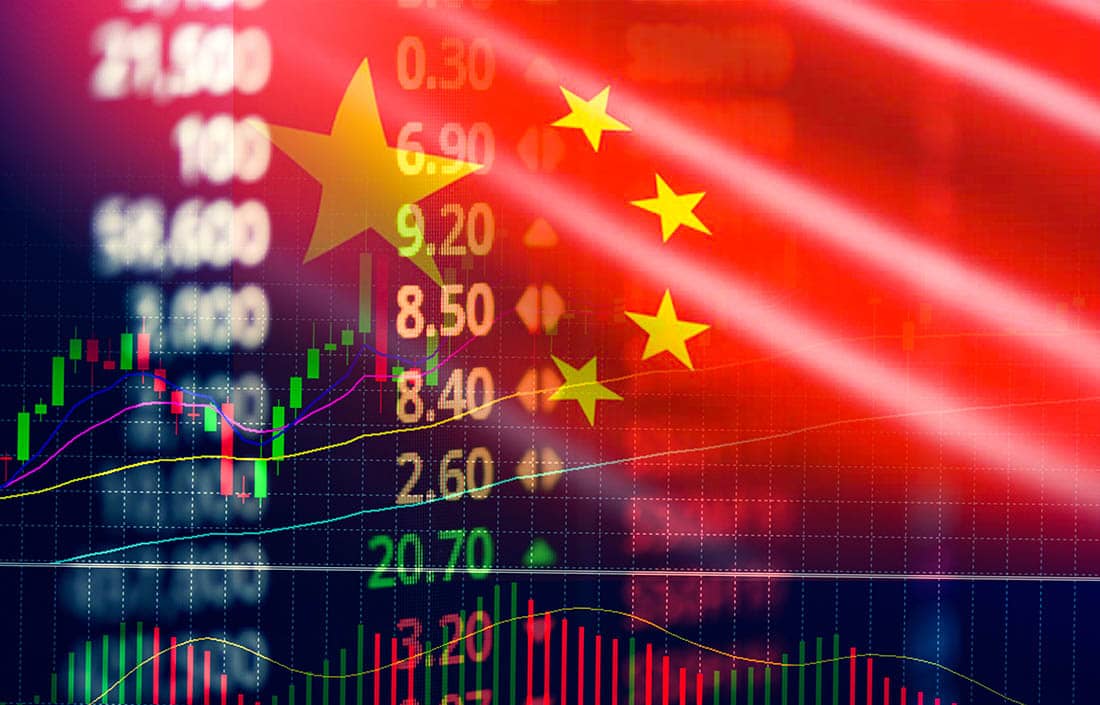 A slump in Chinese stock valuations has prompted a decline in the Australian Dollar as investors fear a major Coronavirus outbreak is about to hit the world's most populous country even as authorities continue to insist on a zero-covid policy.

The Chinese A50 index was down a sizeable further 5.68% on Tuesday, while the Hong Kong HS50 was down 6.0%, a new six-year low, signalling a marked deterioration in investor sentiment.

New Covid cases in China more than doubled from a day earlier to a two-year high at 3,507 as a virus outbreak expanded rapidly, particularly in the north east of the country.

The north eastern Jilin province as well as the technology hub of Shenzhen - which is closer to Hong Kong - have effectively entered a lockdown.

Hong Kong is meanwhile posting the most elevated Covid morbidity rates of any country during the two-year pandemic.

The developments add to investor expectations Chinese growth will slow massively in coming months, which could have a major knock-on effect for Australian and New Zealand commodity exports.

"The antipodeans open the week under a bit of pressure as China announce various lockdown and containment measures on account of a spike in COVID cases," says a note from JP Morgan's spot trading desk in London. 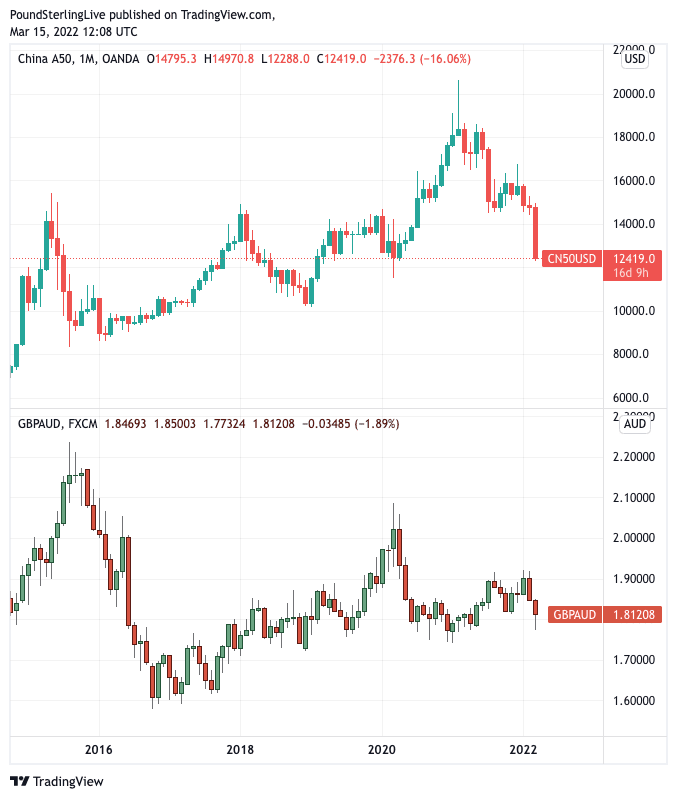 Above: Charts showing the China A50 stock index and GBP/AUD at monthly intervals.

The Covid outbreak in Hong Kong has proven severe and authorities worry it might provide a template for greater China over coming weeks and months.

Media report morgues in Hong Kong have reached capacity and large freezer containers have been sent to public hospitals to store bodies.

Data finds Hong Kong’s Covid-19 morbidity rate has surged past its Asia-Pacific peers, and is now passing European countries, in fact in recent days Hong Kong has set a global record for the highest daily Covid death rate of the pandemic. 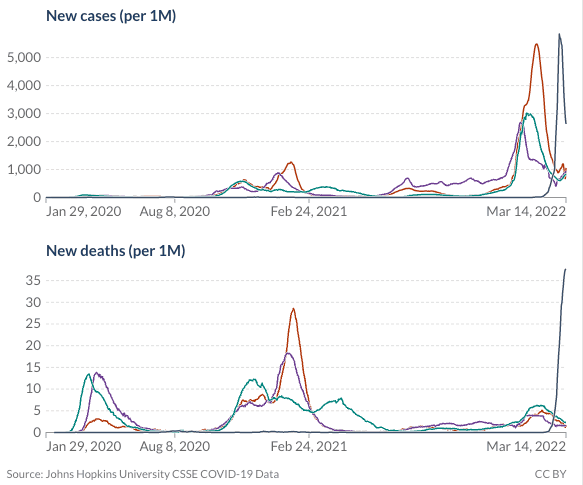 Analysis from the FT's John Burn-Murdoch finds Hong Kong has a relatively low vaccine penetration rate and previous infection immunity in its 80+ population segment, which explains the soaring death rates.

Mainland China is more guarded with its health data but there are fears that Hong Kong offers a window into how the spread of the highly transmissible Omicron family of variants will impact the country given the similar population and public health profiles.

"China’s infamous 'zero tolerance' policy for COVID cases is facing its biggest test since the initial height of the pandemic in 2020. Major cities (and key supply chain hubs) like Shenzhen, Dongguan, Shanghai, and potentially even Beijing face lockdowns as the country seeks to limit the spread of the virus," says Matt Weller, Global Head of Research, at FOREX.com and City Index.

The Australian Dollar is often seen as a proxy for Chinese exposure and any China-lead slowdown could be felt by the currency.

"With Omicron typically seeing a very rapid spread, and China not expected to move away from its zero-tolerance policy, Chinese lockdowns could intensify over the remainder of this month, further adding to global growth concerns and suppressing oil prices," says Annabel Bishop, Chief Economist at Investec. 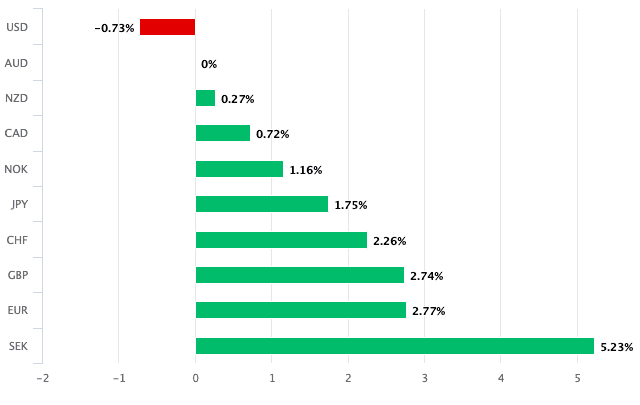 Above: AUD is the second best performing currency of 2022.

Heading into this week the Australian Dollar and New Zealand Dollar were the joint best performing major G10 currencies of the past month, proving surprising winners in an environment of deep investor angst related to the war in Ukraine.

Market focus does however tend to shift from one theme to the next and were the Ukraine theme to start fading in light of developments in China then the Aussie Dollar might find itself giving back more of its recent gains.

In recognition of the difficulties facing the economy, China is reportedly set to cut interest rates further to stabilise the economy according to former central bank adviser.

Chinese banks extended 1.23 trillion yuan (US$194 billion) in new yuan loans in February, down sharply from a record 3.98 trillion yuan in January and falling short of analysts’ expectations.

Any significant easing of policy could provide some degree of protection to the Chinese economy and associated financial assets, such as the antipodean currencies.

While the AUD and NZD were the leading outperformers during the peak anxieties related to the war in Ukraine, any easing in tensions could see them give back some of those gains.

Surging commodity prices related to the war boosted Australia's terms of trade given the country is a major commodity exporter. "The prices for Australian exports (oil, gas, wheat and base metals) are being pushed higher by the threat of a trade embargo against Russian exports and these exports amount to over 6% of Australia’s GDP," says Valentin Marinov, Head of FX Research at Crédit Agricole.

But commodity prices are in retreat from recent peaks as we move through mid-March as markets factor in the potential for a ceasefire in Ukraine, given Ukraine and Russia continue to negotiate towards a settlement.

"AUD strength will likely be sustained if geopolitical risks remain elevated, as it draws on a combination of improving terms of trade and relative rates with US rates lower. A deescalation should pose near-term headwinds as commodity prices ease and US rates rise as focus shifts to the upcoming FOMC decision next week," says a weekly foreign exchange strategy note from Barclays.

Given recent developments, 'peak Aussie' might just have passed.